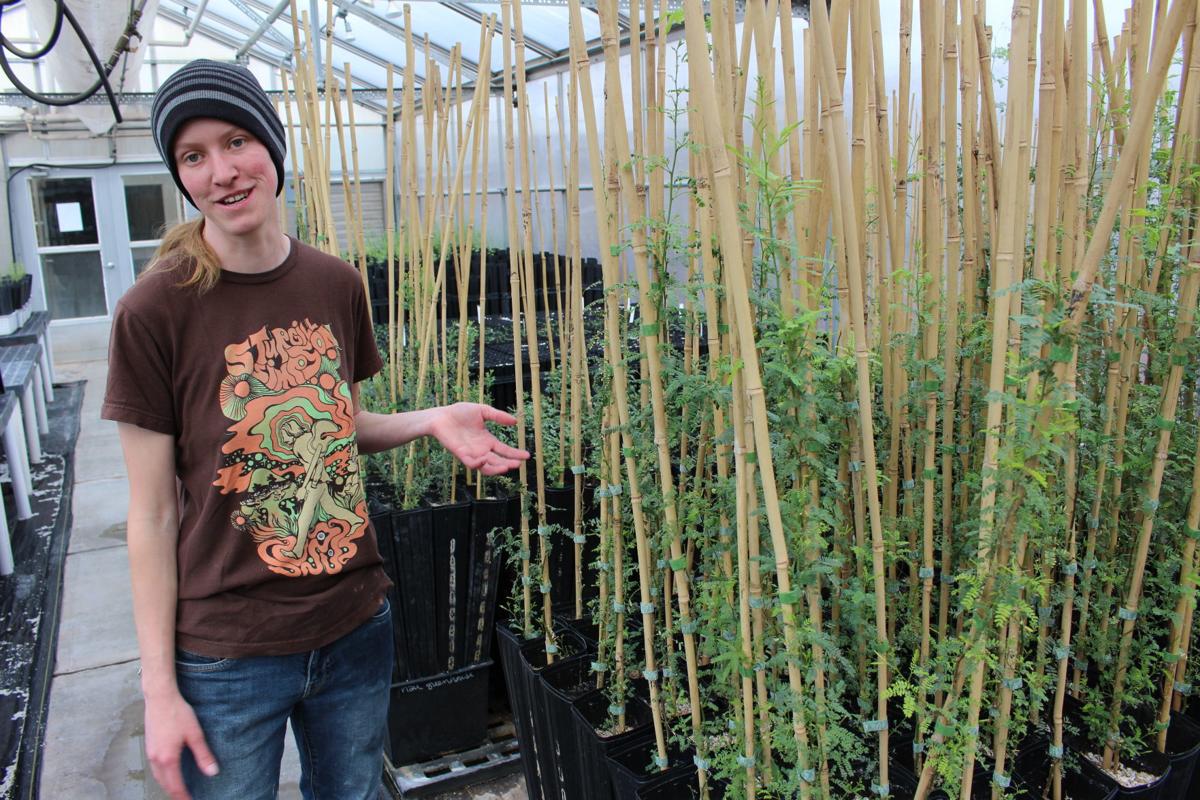 Adair Patterson, research greenhouse manager, points out how the batch of honey mesquite have grown faster than the other plants that have been growing for over six months on Wednesday. 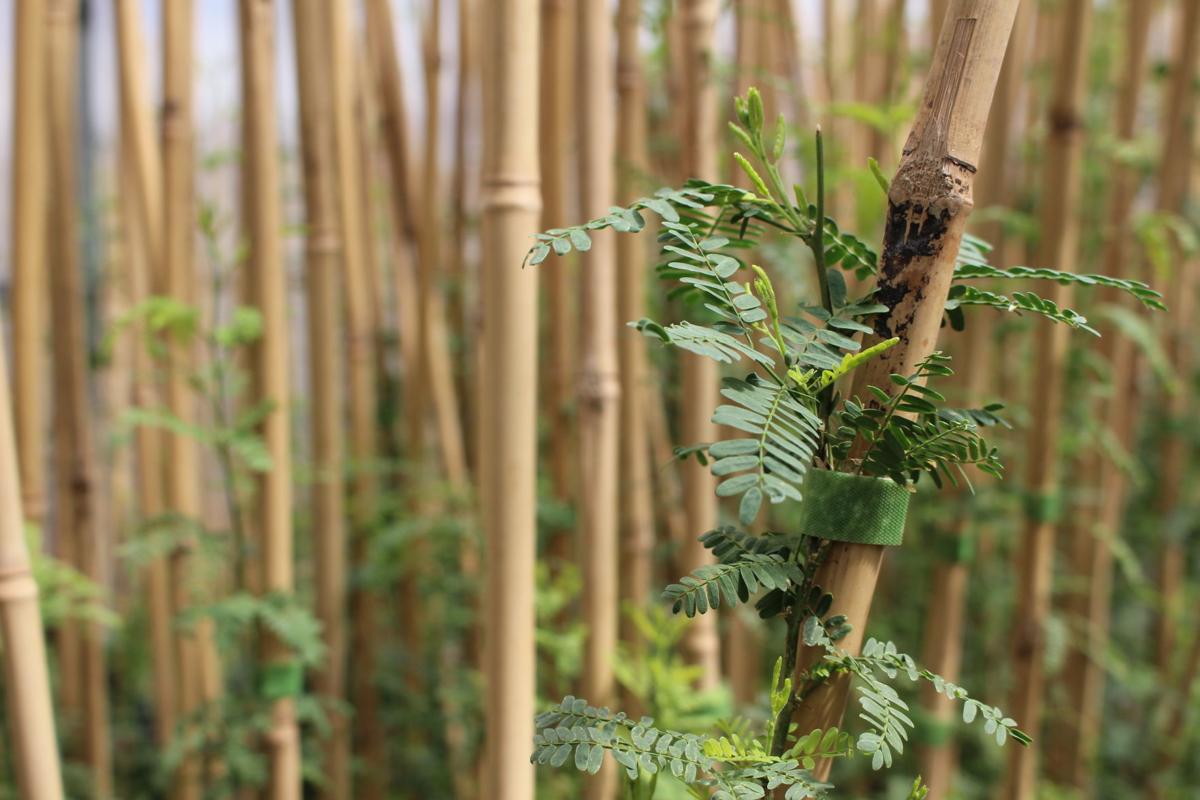 The honey mesquite have grown taller than the screwbean mesquite and blue palo verde that have been growing for over six months. 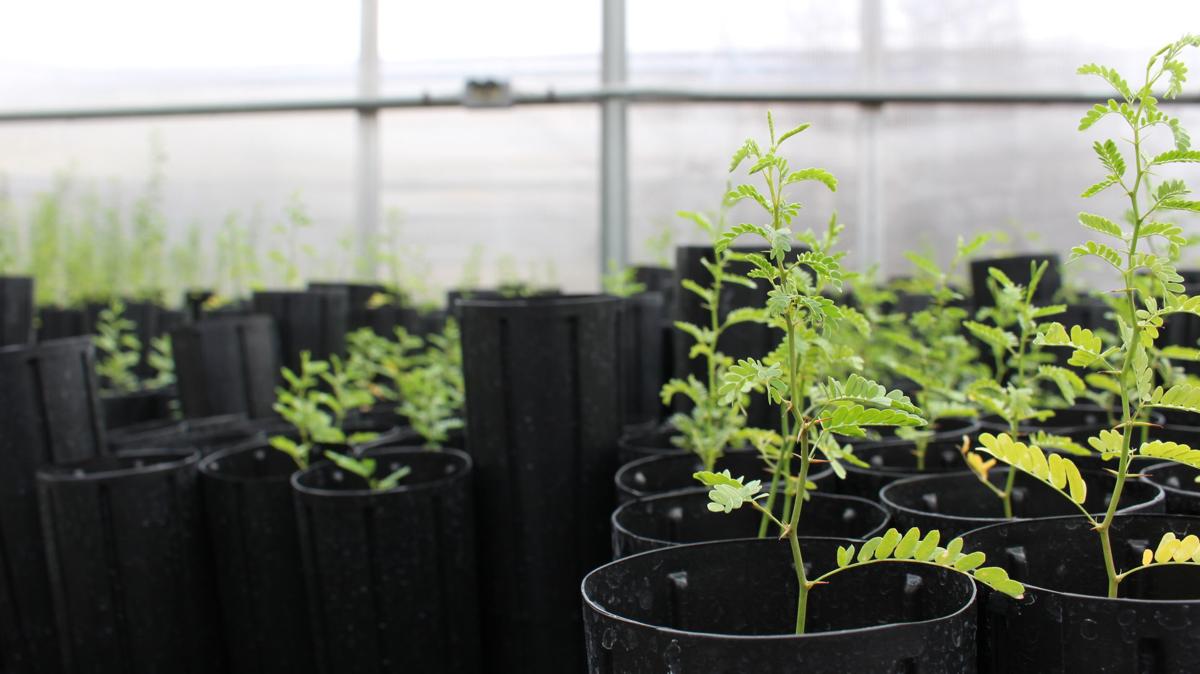 The many screwbean mesquite saplings grown by the NAU Research Greenhouse pictured on Wednesday is a type of plant native to the Phoenix desert and is well adapted to withstand the high temperatures and dry seasons.

Northern Arizona University is growing 1,000 trees that Arizona State University plans to use as a forest on their Phoenix campus to offset carbon emissions and provide an outdoor learning area for students.

The slow-growing trees, specially picked for the harsh desert landscape of Phoenix, have been growing since past June when ASU confirmed their contract with NAU’s Research Greenhouse. The trees are being grown for ASU’s 10-and-a-half-acre Carbon Sink and Learning Forest, with each tree expected to sequester 3.4 tons of carbon over its lifetime. The forest is expected to be shipped down to Phoenix to be planted after monsoon season, maybe around October or November.

It’s unlikely ASU could have found a climate more different from its own in Arizona than Flagstaff’s; however, Research Greenhouse has made a name for growing trees through their many reforestation projects. Corey Hawkey, assistant director for ASU’s sustainability practices, said it was easier for Hawky to rely on NAU to ensure the project was done right.

From Flagstaff to Phoenix

The 1,000 trees are made up of honey mesquite, screwbean mesquite and blue palo verde.

Adair Patterson, greenhouse complex manager, said their team made sure to not only find trees that are known to grow in Phoenix, but to use seeds grown in the region to ensure they’re used to the Phoenix temperatures.

The greenhouse complex workers only watered the plants once every week, and sometimes once every two weeks, to mimic the arid conditions in the desert. Also, Patterson ensured the temperature stayed in optimum range, and even kept temperatures above 65 degrees during the cold Flagstaff winter nights.

However, the entire year after they’re planted will be the true test. Patterson is trying to prepare the plants to both have days of intense heat and sporadic patterns of water.

“When you get out in the field, it just adds a myriad of things you gotta worry about,” Patteron said.

With all projects, Peterson expects to have around 75% percent of the trees to survive the trip in a moving van and planting into their permanent home. Besides dying during transport, animals or pests can eat the trees and sometimes the trees just don’t take to their home in the wild.

“I wish I had the time to go around and check all the project sites that I’ve grown trees for, and just look at them and see how they’re doing,” Patterson said.

If ASU was solely doing this project for carbon sequestration to reach carbon neutrality, Peterson pointed out, there are more effective plants that could have been used. A general rule of thumb is that the larger the plant, the more carbon it sequesters.

Many large agencies are pushing for carbon neutrality by absorbing more carbon from the atmosphere than the agency emits into it to offset the measureable impacts of climate change. While carbon offsetting has raised some critique from environmental groups because of its difficulty to measure and some say it incentivizes polluting, Hawkey countered this project was about more than just carbon neutrality.

“3,400 tons of carbon is hardly a drop in the bucket,” Hawkey said. “The point of this is to bring opportunities to our campus to learn and research the trees that will potentially provide us information for a larger project down the room. … This isn’t going to solve our carbon situation.”

Phoenician students will be able to use the desert forest to study carbon sequestration, urban heat islands and radiation among other topics.

“We’re using our campus as a living laboratory,” Hawkey said.

ASU has committed to becoming carbon neutral for their resources and energy purchases by 2025, and to be totally carbon neutral by 2035. ASU emitted roughly 260,000 tons of carbon in 2019.

There is a climate emergency. That was the conclusion of Flagstaff City Council after a nearly four-hour discussion with over 250 members of t…

Drying forests and uranium top environmental stories of the decade

Many different stories carried on for much of the decade, including the condition of forests around the area as well as the continued push for…

FLAGSTAFF – By next fall, the U.S. will be the only country to have left the Paris Agreement – an international accord signed by nearly 200 co…

Adair Patterson, research greenhouse manager, points out how the batch of honey mesquite have grown faster than the other plants that have been growing for over six months on Wednesday.

The honey mesquite have grown taller than the screwbean mesquite and blue palo verde that have been growing for over six months.

The many screwbean mesquite saplings grown by the NAU Research Greenhouse pictured on Wednesday is a type of plant native to the Phoenix desert and is well adapted to withstand the high temperatures and dry seasons.