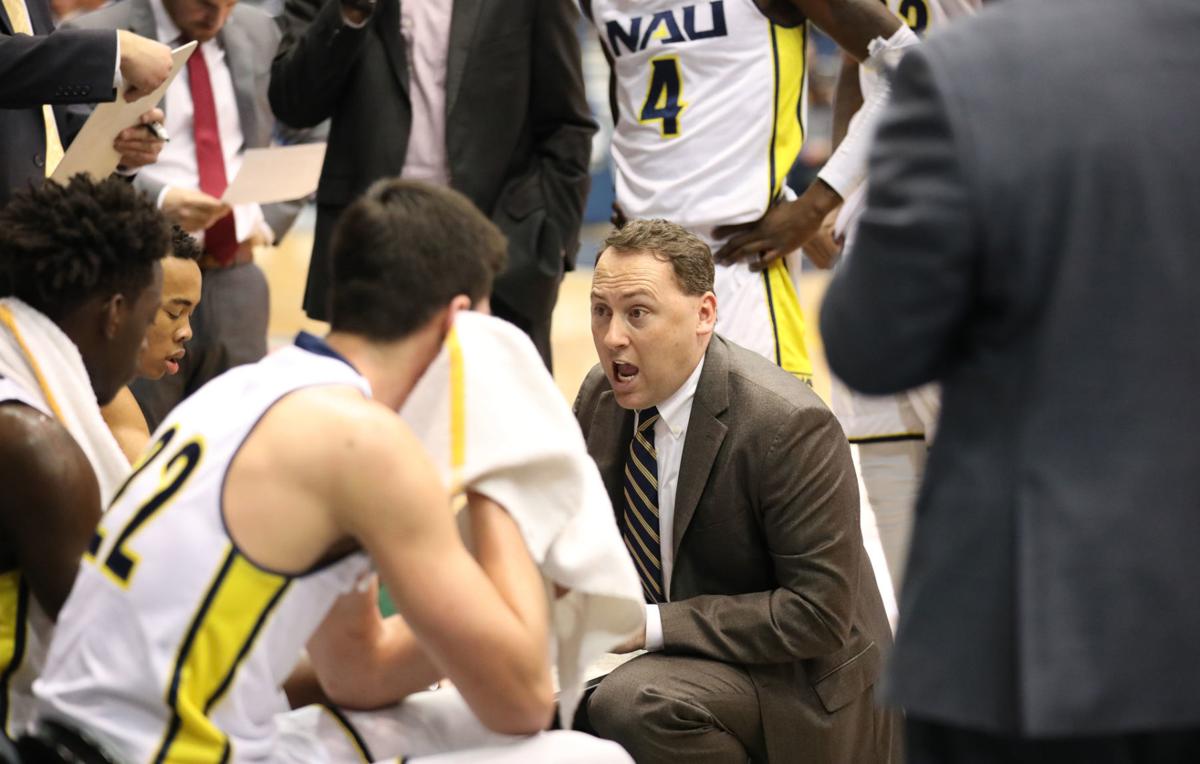 Northern Arizona head coach Jack Murphy speaks with his players during a timeout in a game against Weber State in the Walkup Skydome in the 2018-19 season. 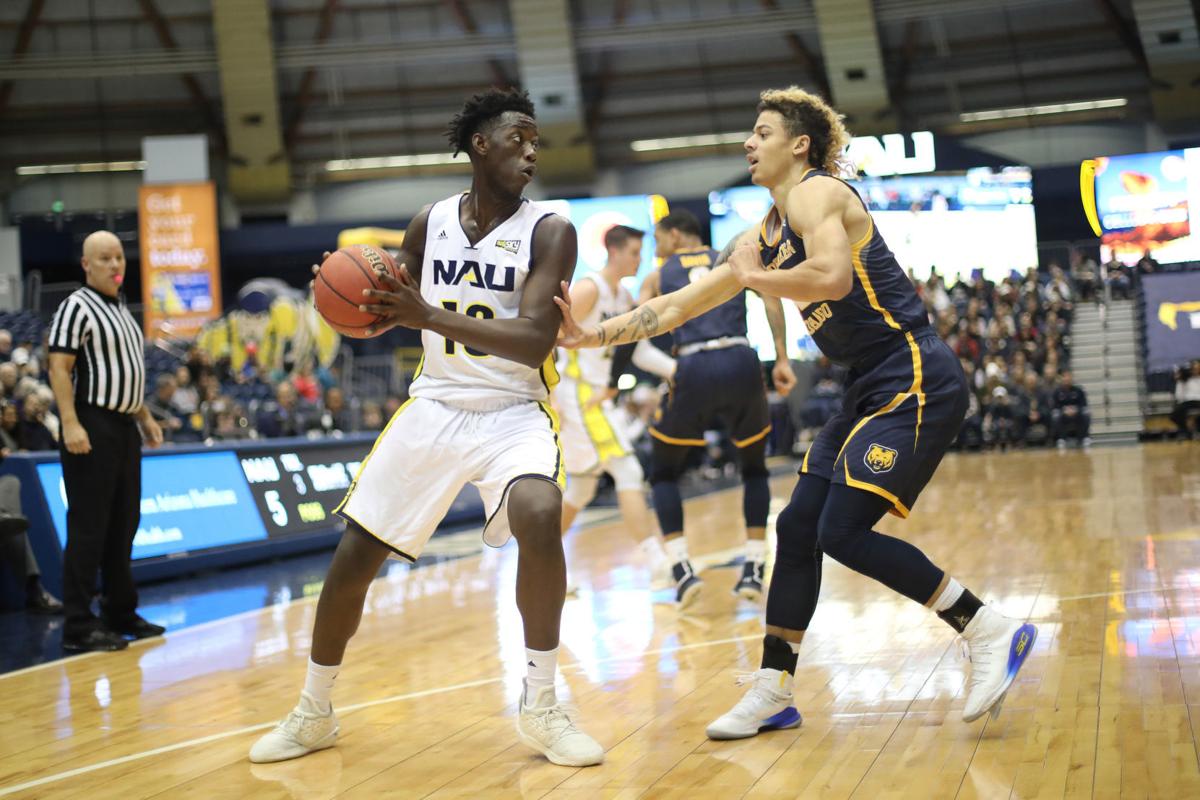 Northern Arizona’s Bernie Andre (10) shields the ball from a Northern Colorado defender in the Walkup Skydome during a game in the 2018-19 season. 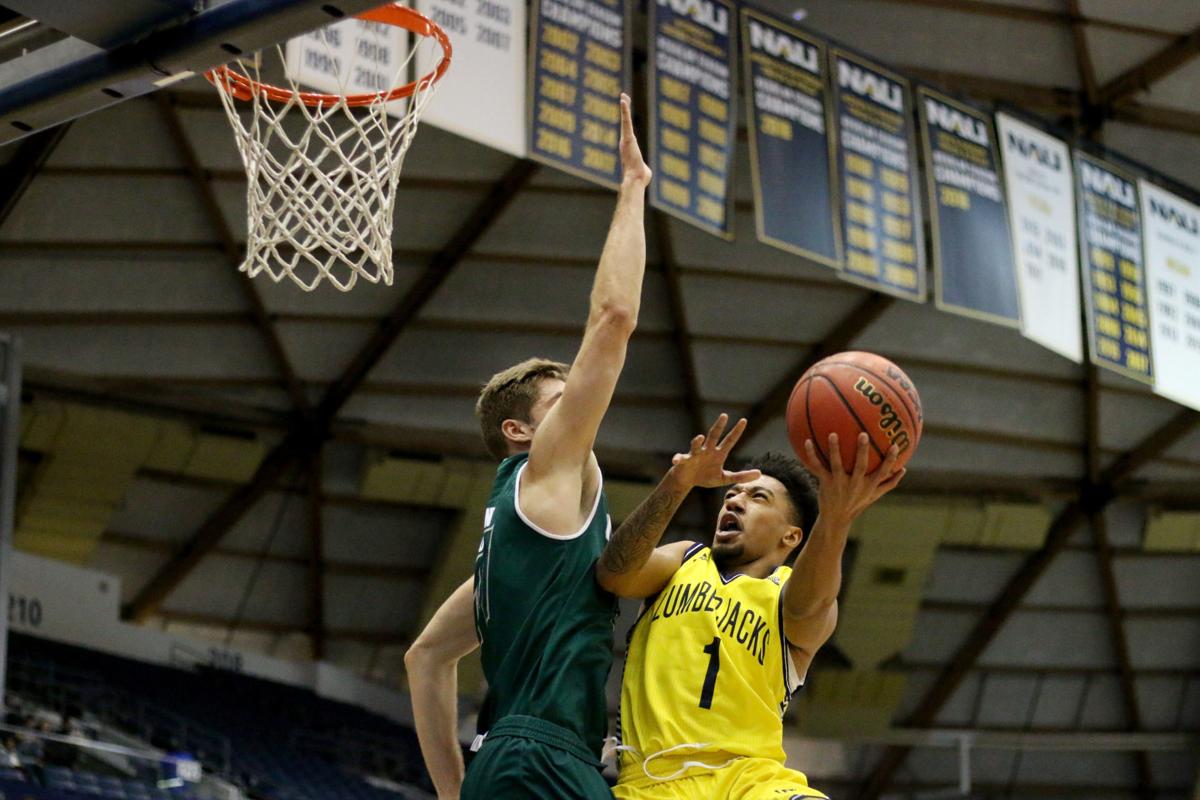 Northern Arizona guard Davon Bolton (1) goes up for a layup during a game against Utah Valley at the Walkup Skydome.

Much like the end of the previous years, questions loomed over the Northern Arizona men’s basketball program and the future of head coach Jack Murphy at the conclusion of the 2018-19 season.

Northern Arizona vice president for intercollegiate athletics Mike Marlow, as well as Murphy, confirmed recently that Murphy is returning to the helm, after the two met to evaluate the season a few weeks following its conclusion.

With Murphy’s contract set to expire March 15, 2020, because of an April 2012 extension, Marlow said he plans on evaluating the program at the end of the approaching season.

“We have other coaches who have recently coached into their last contract year,” Marlow said, referencing former head soccer coach Andre Luciano and former head football coach Jerome Souers. “We will continue to evaluate all programs and determine contract extensions at the conclusion of each competitive season."

Murphy understands the volatile nature of coaching Division I basketball as well as the pressure he believes is always there, no matter the results.

He added: "This is a big boy business and I’m a big boy, and I understand the risks that are involved in my profession. They’re unique to other professions. But I’m also blessed to have this opportunity to coach."

Murphy has amassed a 78-149 record in Flagstaff (a win percentage of 34.4%), failing to reach double-digit wins in three straight seasons.

Despite the struggles, Marlow gave a nod of confidence to Murphy and the program.

“At the later stages of a very thorough evaluation of the state of the program, my focal point became this team, this coaching staff and the progress made during the season,” Marlow said. “I believe the components are in place to perform at a high level next season."

Northern Arizona’s struggles of the past four seasons under Murphy are evident and well-documented. For Murphy, he genuinely saw progress last season and is confident in what the returning players can do next year.

“Heading into (2014-15) was the last time I felt this great about the roster and returning pieces,” Murphy said. “We’ve always had question marks in the offseason going into a new season, and right now I don’t know if we have as many question marks, because the guys that played consistently, the six or seven guys that played the major minutes at the end of the year, are all coming back.”

Heading into next year, the Lumberjacks are set to return nine of 12 players from the season, equaling about 87.5 percent their total minutes. Should Northern Arizona's roster play similar roles next season, the mark would have ranked in the top two of KenPom.com's minute continuity rankings since 2014.

Murphy has had to deal with ever-changing rosters, with multiple key contributors leaving the program early such as Kris Yanku, Mike Green, Marcus DeBerry, Torry Johnson and JoJo Anderson.

Thomas was the only player of an eight-man freshmen class in 2013-14 that ended up staying long enough to participate for his Senior Day -- showing that having too many first-year players on a roster at a single time can be risky.

“Last year we had a good balance, we had some junior college guys come in and perform for us. Bernie (Andre), Ted McCree, Davon (Bolton),” Murphy said. “You got a kid like Cam Satterwhite sitting out and a couple other freshmen. You have to mix up the classes and have good class balance.”

The expected roster continuity for next year, assuming no players leave the program, will be the highest that Murphy has gotten at Northern Arizona -- higher than the mark in 2014 that led to Murphy’s best season in Flagstaff.

While having all of his top contributors back next year bodes well for Murphy and the team, he will have to figure how to slot in now-eligible transfer guard Satterwhite into a potentially crowded guard lineup.

Between Carlos Hines, McCree, Luke Avdalovic, Cameron Shelton, Chris Bowling and Satterwhite, finding a rotation that works in the backcourt will be key for the Lumberjacks next season.

“I think when you look at our perimeter depth, we can be as talented as we have ever been since I’ve been here,” he said. “Both with experience, talent, skill and shot-making ability.”

Last season the Lumberjacks made strides, slowly coming out of the hole that had been dug the past three years.

Northern Arizona doubled its win total, going from five wins to 10, and lost four games in the Big Sky on the last possession.

The problems from the season, Murphy said, stemmed from lack of hoops experience at the college level. Northern Arizona had just one player in the starting lineup, DeBisschop, who had a career start in D-I.

“You look back on the guys that played a good amount of minutes, Brooks (DeBisschop) is really the only one with a good amount of experience at the Division I level," Murphy said "…The inexperience early on kinda got us in nonconference.”

The Lumberjacks went 2-8 in the nonconference slate, struggling to start the season despite opening at 2-1. The team was 8-12 in the Big Sky -- a mark Murphy pointed out illustrates the progress he believes the team made.

“Sometimes you learn your most out of failure,” Murphy said, “and I think we’ve done that, but we’re turning the corner to the bright light at the end of the tunnel.”

Northern Arizona head coach Jack Murphy speaks with his players during a timeout in a game against Weber State in the Walkup Skydome in the 2018-19 season.

Northern Arizona’s Bernie Andre (10) shields the ball from a Northern Colorado defender in the Walkup Skydome during a game in the 2018-19 season.

Northern Arizona guard Davon Bolton (1) goes up for a layup during a game against Utah Valley at the Walkup Skydome.