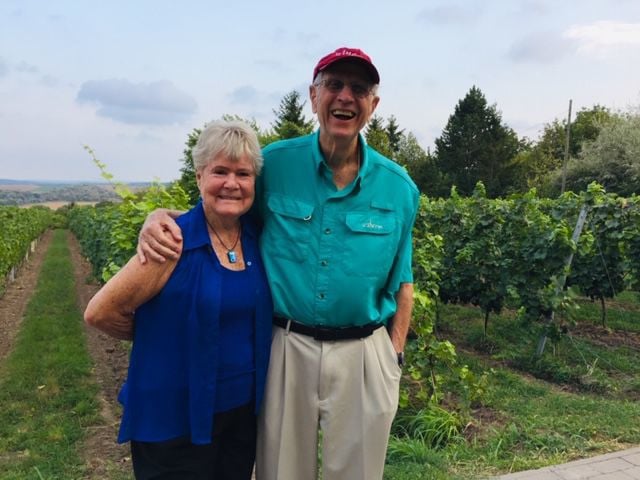 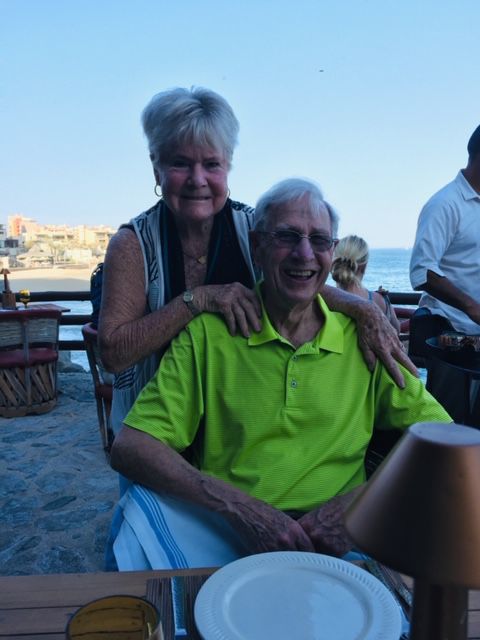 Molly and Gene Munger grin for a photo while enjoying a meal overlooking the ocean.

Molly and Gene Munger’s loving relationship is based on a simple truth: “Don’t walk in front of me, I may not follow. Don’t walk behind me, I may not lead. Just walk beside me, and be my friend.”

Those words, written by philosopher and author Albert Camus, embody the Mungers’ marriage of nearly 23 years. Molly Munger, 78, worked as Director of Community Relations at NAU for approximately a decade, and Gene Munger, 86, retired from a public relations position at Shell Oil before relocating to Flagstaff. Together, the couple has devoted their time to helping others.

Over the years, both husband and wife have supported each other’s endeavors, Gene said. A large part of this encouragement stems from the consistent agreement that supporting society — and giving back — is a vital component of the human experience.

“Together, volunteering has changed our lives,” Molly said. “We find it very rewarding to give back to the community.”

Flagstaff’s small-town environment has helped to orchestrate meaningful friendships, strong networks and a dependable community, the Mungers explained. In contrast, this cohesion and purpose is more difficult to establish in bigger cities, they added.

“Life has been good to both of us,” Gene said. “Being in Flagstaff has been the best years of my life.”

Currently, Gene volunteers at Knoles Elementary School, where he spends time reading to fourth-graders. He said this interaction has been unforgettable, particularly because it teaches the students — and him — valuable lessons about life.

Community outreach, such as this regular involvement at Knoles, aligns with the Mungers’ mutual gratitude and recognition. Additionally, the couple adopts a shared set of written principles that denote these values.

“You have not lived today until you have done something for someone who can never repay you,” the Mungers’ morals read.

Since Gene's arrival in Flagstaff in 1997, the pair has continued to build an impressive partnership. The couple acknowledged the importance of friendship, and they both said respecting the other side’s opinions and wishes — regardless of any personal preference — has been critical.

Although all relationships carry their respective ups and downs, partnerships remain constant, Gene said. In the end, adoration prevails over argument, a major theme for the Mungers heading into another affectionate Valentine’s Day.

“It’s been a marvelous relationship, and we’ve been very lucky,” Gene Munger said. “We’ve developed a strong partnership, and that’s the key to living happily and effectively.”

To begin their relationship, the eventual companions connected through mutual friends. Both husband and wife were married previously, but together, the Mungers redefined their perception of love. Although life can generate various romances, Molly explained, a single person can truly change everything.

Despite their initial spark, the duo was forced to communicate via letter — a romance arising from distance. At the time, Gene still lived in Washington and worked for Shell Oil, although his eventual wife already resided in Flagstaff as a longtime NAU employee. This written correspondence allowed the couple to share and learn, and they also discovered a number of common interests.

“I think we complement each other very much so,” Molly said. “We know how to communicate and care without it being a threat.”

Valentine’s Day entails attending a musical performance or enjoying a leisurely dinner, the Mungers said. After years of happy marriage, the couple understands how to listen and laugh, which helps them stay connected.

“We made our lives better because we listened to each other. We talked and we communicated,” Gene said. “Don’t get so cramped in your own lifestyle that you’re not willing to listen to anyone else.”

The duo strives to listen to each other's professional interests, they elaborated. Gene, who has published five books in the past decade, praised his wife as an infallible and passionate editor. His wife, on the other hand, said her partner reliably supported her work and pursuits at the university. In this regard, listening has proven invaluable, the Mungers agreed.

As the dedicated partners anticipate another Valentine’s Day, they expressed their appreciation for being healthy and happy. Life is a blessing, and the Mungers still cherish it.

Pet of the Week: Coda

Coda is an older, healthy kitty who was an owner surrender who had lived in a home his whole life. He is likely the saddest shelter kitty we'v…

Forehead scrunched and cheeks flushed, but a smile spread across her face, 10-year-old Addy Sullivan methodically did side steps in the weight…

Molly and Gene Munger grin for a photo while enjoying a meal overlooking the ocean.