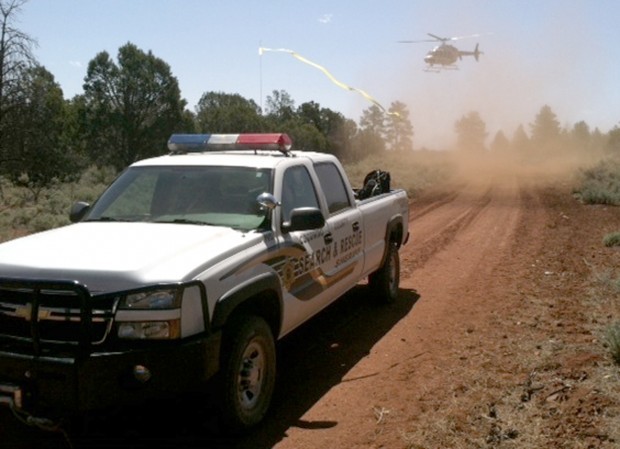 The Coconino County Sheriff's Office is searching the Hualapai Indian Reservation with help from the Arizona Department of Public Safety helicopter for overdue hiker Bill Ott who has been missing since April 28th. Photo Courtesy CCSO 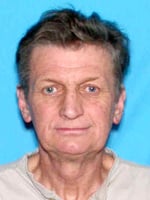 Rescuers are searching for 65-year-old Bill Ott by foot and by air in a remote system of canyons west of Grand Canyon National Park on Hualapai tribal land.

More than two weeks after he became overdue in the rugged area amid a 21-day backpacking trip, they're hoping to find him alive.

They say that if anyone could survive this, Ott could. But water is a serious concern.

"He's one of these people that's just a higher level of Grand Canyon hiker than the typical Grand Canyon hiker. He has the experience to survive. He's a pretty tough guy," said Sgt. Aaron Dick, Coconino County Search and Rescue coordinator.

Ott hiked the entire north side of the Grand Canyon -- estimated at around 600 miles when allowing for massive elevation gains and losses -- in 1981 in 78 days, before he became a river runner on the Colorado River through Grand Canyon.

Ott was the first to walk the entire distance below the canyon's rim, from Lees Ferry to Lake Mead, and he did most of it solo, according to physician and author Tom Myers, who had past email communications with Ott.

He has also been a river ranger at Dinosaur National Monument, and more recently a nurse.

Ott had lived in Flagstaff, Tempe and Marble Canyon before moving to a rural community in southern Oregon, where he built a log cabin by hand and without power tools.

Ott does about one long Grand Canyon hike annually. This time, he left his vehicle with a friend in Flagstaff and took a ride out to a remote area on Hualapai land west of Grand Canyon National Park.

He intended to live off water in potholes in rocks and a couple springs. He also planned to hitchhike back when he was finished hiking after about three weeks.

About 12 to 15 people (federal, local, state, tribal and volunteers) are searching for Ott daily, in temperatures that sometimes exceed 90 degrees, but combing the area requires searching side canyons across a number of miles.

They've contacted Colorado River rafting companies (in case he boarded a boat) and put up missing posters, Dick said. They are also interviewing some of the few local people familiar with the terrain.

Searchers have found a few of his footprints, comparing dimensions from a pair of shoes left in his car.

"There are not very many people who've been in the area, so the clues we're finding, we believe, are tied to him," Dick said

The big concern is water, and a second worry is that Ott might have become injured and stuck after finding little or no water.

"That guy could route-find. There's no way that he couldn't have found his way out of there," Myers said.

The potholes Ott had planned on didn't hold much water this year and two springs in the area are dry, Dick said.

Normally, the height of grass on one broad rock layer might serve as a barometer and tell a hiker that wild horses hadn't been present due to dry weather, for they had grass to eat but not the water they require daily.

Coconino County is continuing to break its records for COVID-19 cases as transmission of the coronavirus increases.

Fat Olives Italian Kitchen was a buzz of activity throughout Monday. But instead of customers, medical professionals dressed in white plastic gowns and wearing N95 respirators and face shields sat at the tables. Employees entered a few at a time to get tested for COVID-19, free of charge.

Gov. Doug Ducey is holding another weekly press conference at 3 p.m. on Monday to give updates on the state of Arizona's response to the coron…

The Coconino County Sheriff's Office is searching the Hualapai Indian Reservation with help from the Arizona Department of Public Safety helicopter for overdue hiker Bill Ott who has been missing since April 28th. Photo Courtesy CCSO