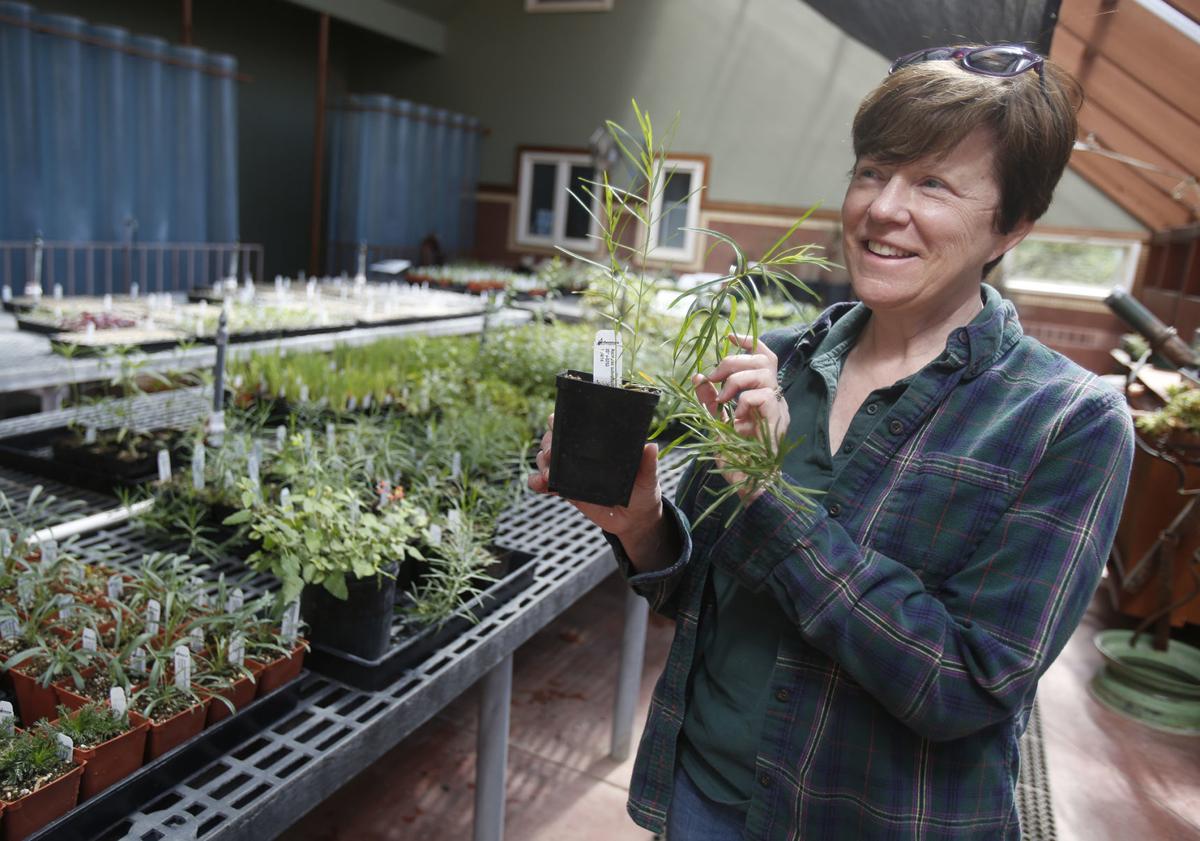 2015 FILE PHOTO -- Lynne Nemeth, executive director of the Arboretum at Flagstaff, stands in a green house with horsetail milkweed seedlings, one of several varieties the Arboretum will be planting on its grounds this summer in an effort to restore habitat for declining monarch butterfly populations. Monarchs lay their eggs on milkweed plants and it is the only plant the larvae eat, making it extremely critical for the species. 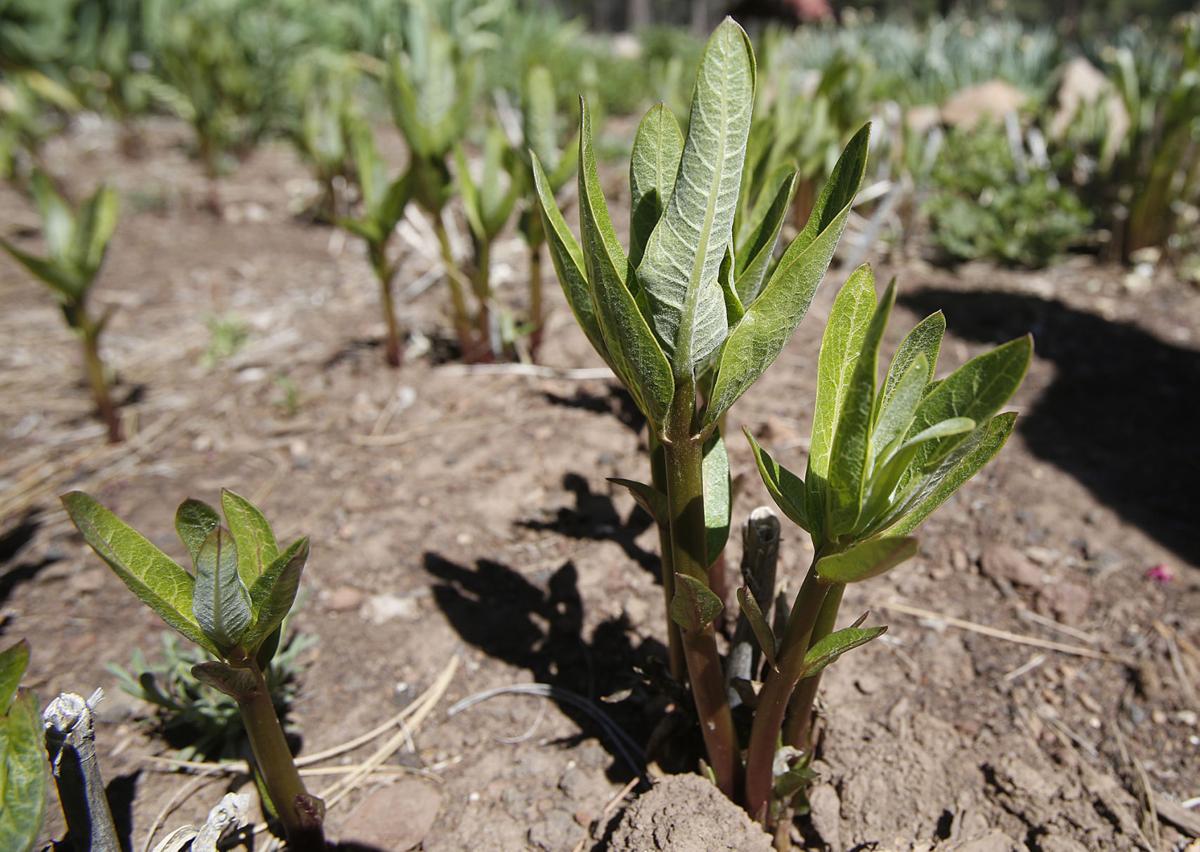 Showy milkweed is one of several species of the plant being cultivated at the Arboretum at Flagstaff. 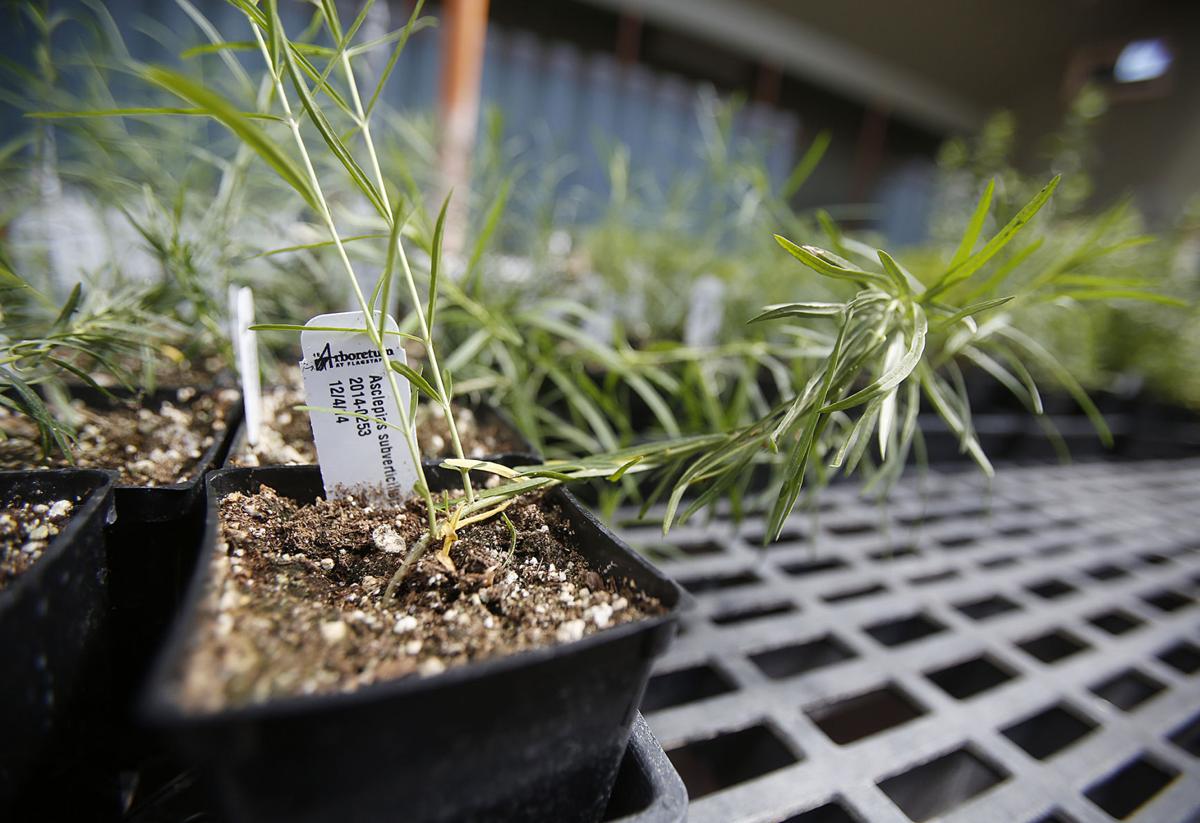 Horsetail milkweed is one of several being planted at the Arboretum at Flagstaff in hopes of helping to restore declining monarch butterfly populations. Milkweed is a vital component of monarch butterflies' reproduction cycle. 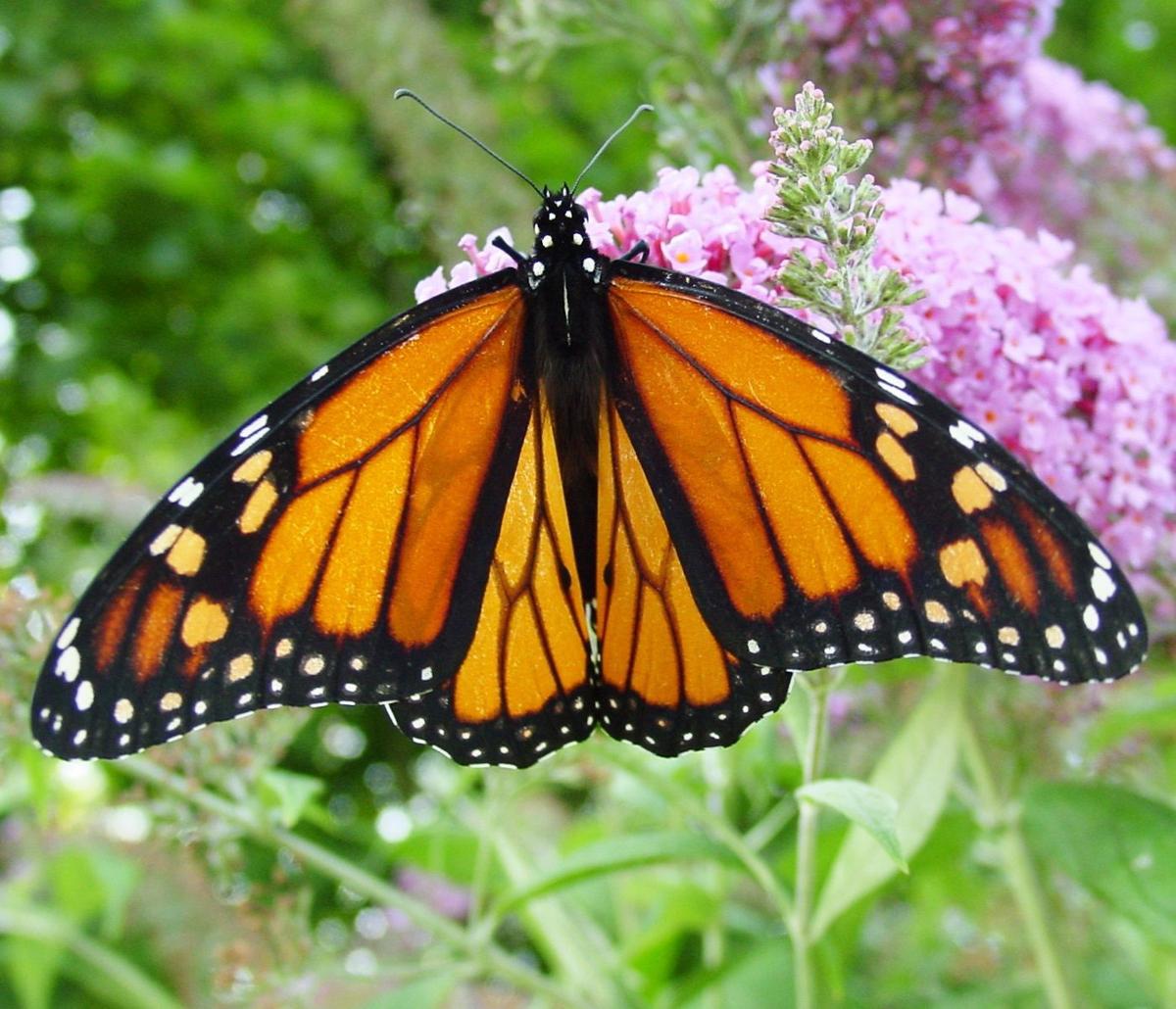 With population declines hovering around 90 percent, North America’s monarch butterflies are teetering on the edge of endangered status.

But as the federal government weighs whether to officially list the iconic black and gold butterfly, at least two local groups of horticulturalists are moving ahead with efforts to create safe havens for monarchs in Flagstaff.

Much of their work involves planting milkweed, and lots of it. The flowering plant, which is native to northern Arizona, serves as the exclusive plant host and crucial food source for the monarch butterfly larvae. Without it, the monarchs’ life cycle is crippled.

The U.S. Fish and Wildlife Service blames agricultural practices such as pesticide use, development and conversion of native prairie to cropland for wiping out thousands of acres of monarch habitat, including milkweed plants.

The Arboretum at Flagstaff is one of the entities embarking on a milkweed planting spree. The Arboretum received $20,000 in grant money from the U.S. Fish and Wildlife Service to help sustain and promote the species.

This spring, the organization is cultivating about 50 native milkweed seedlings that it will plant on its grounds, said Lynne Nemeth, executive director of the Arboretum. When those plants go to seed in the fall, the Arboretum will collect the seeds and sell them or give them away to local residents and organizations, as well as use them to grow more seedlings, she said.

Meanwhile on Northern Arizona University’s campus, horticulturalist and campus organic gardener Jan Busco has about 1,000 milkweed seedlings that will soon be planted in an unused corner of the half-acre garden plot cultivated by the Students for Sustainable Living and Urban Garden. A major part of the garden’s sustainability goals is encouraging pollinators in the garden and on the landscape, which is where milkweed comes into play, Busco said.

“We have this whole species destruction going on, but we can do little things that can help bees and butterflies and other animals that are having a hard time,” Busco said. “We can take our areas and use them to keep all these vital functions going.”

A handful of milkweed species are native to northern Arizona, and both Nemeth and Busco stressed the importance of planting these instead of foreign breeds.

Native milkweed plants are not only better adapted to the local soils and climate, but they represent the ideal food source for the western population of monarch butterflies that migrate through northern Arizona, Nemeth said. Nonnative milkweed plants also have different flowering cycles, which could throw off the timing of monarchs’ migration patterns, Busco said.

Nectar flowers, as the food source for the adult butterflies, are the other half of the equation for sustaining the species, so both NAU and the Arboretum are growing more of these blooms as well. Rabbitbrush, thistle, sunflower, aster and goldenrod species are monarch favorites, Nemeth said.

Consumers seem to be catching on to the milkweed movement. Nigel Sparks, the owner of Flagstaff Native Plant and Seed, said demand for milkweed plant and seeds has been high since the winter, with inquiries even coming in from out of state. The nursery carries three species of native milkweed.

The plants aren’t particularly easy to grow though, Sparks said. They shouldn’t be planted in pots and the seeds should be tucked into the ground in late fall because they need the cold of the winter to germinate, he said.

In it for the long run

The Arboretum’s goal is to become a long-term source of milkweed seeds and plants for restoration purposes, Nemeth said. This fall, Arboretum staff will head into local forests to collect more native seeds from mature plants. Some of those seeds will go back to the U.S. Fish and Wildlife Service, she said.

Nemeth encouraged homeowners interested in milkweed to contact the Arboretum for planting advice and other information, and she emphasized that homeowners should also make sure they aren’t pulling out milkweed around their properties.

In the coming years, the organization plans to work with the city and local schools to give them milkweed seeds and plants. The Arboretum also is working to become certified as a monarch waystation. The waystations are places with enough milkweed and nectar flowers for the butterflies to produce successive generations and sustain their migration.

“If we can conserve the plants and conserve such an iconic butterfly like a monarch, it’s a fabulous project for us to be involved in,” Nemeth said of the Arboretum’s work with the U.S. Fish and Wildlife Service.

Ideally, such work would allow the agency to avoid listing monarchs under the Endangered Species Act, which would be less costly and a big advantage for everyone involved, said Sheila Murray a research botanist at the Arboretum.

“It’s exciting that the government is taking a proactive stance,” Murray said. “We can fix this, we just have to take a stand.”

Jan Busco, Northern Arizona University horticulturalist, will be hosting a garden tour and milkweed planting event at the garden cultivated by the Students for Sustainable Living and Urban Garden on June 27. The public is invited for one or both activities. The garden is south of the Social and Behavioral Sciences West building on NAU's south campus.

The garden tour will begin at 8 a.m. and the milkweed planting will happen from 9 a.m. to noon. For more information email Busco at Janice.Busco@nau.edu

2015 FILE PHOTO -- Lynne Nemeth, executive director of the Arboretum at Flagstaff, stands in a green house with horsetail milkweed seedlings, one of several varieties the Arboretum will be planting on its grounds this summer in an effort to restore habitat for declining monarch butterfly populations. Monarchs lay their eggs on milkweed plants and it is the only plant the larvae eat, making it extremely critical for the species.

Showy milkweed is one of several species of the plant being cultivated at the Arboretum at Flagstaff.

Horsetail milkweed is one of several being planted at the Arboretum at Flagstaff in hopes of helping to restore declining monarch butterfly populations. Milkweed is a vital component of monarch butterflies' reproduction cycle.