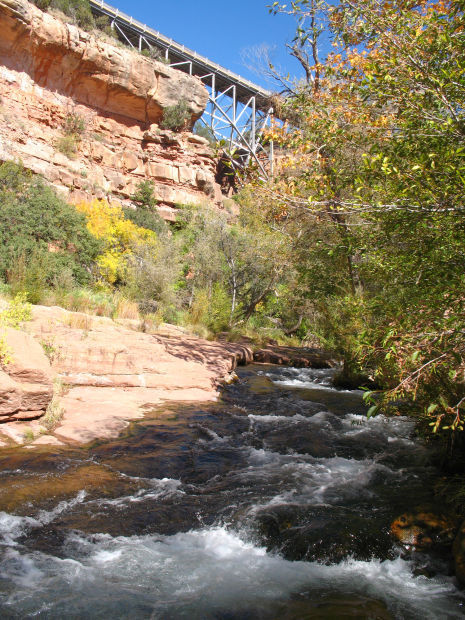 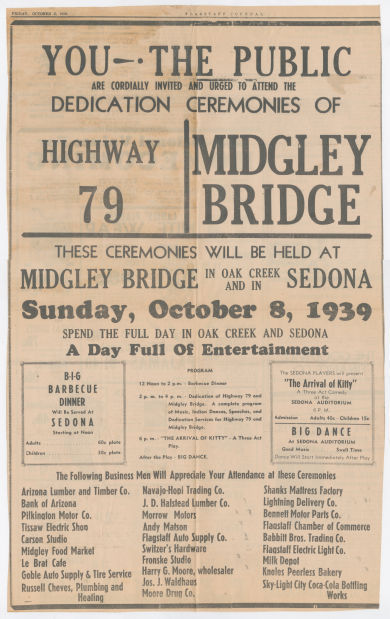 On Wednesday, Oct. 8, 2014, Midgley Bridge will celebrate its 75th anniversary.

Three-quarters of a century later, the bridge remains a highly used road, an architectural landmark, and a linchpin in north country tourism.

The project got its start in 1930 when the U.S. Bureau of Public Roads (BPR) began upgrading the route through Oak Creek Canyon. At this time, the road curved back toward Wilson Mountain, crossed the canyon upstream, and then turned out to rejoin the present roadbed (This route can be hiked today.)

Funded as Arizona Forest Project 7, the Bureau divided the project into several sections and let out separate contracts in the early 1930s. BPR engineers designed the span as a scaled-down version of the immense Navajo Bridge completed in 1929 over the Colorado River near Lees Ferry. In 1938, Lewis Brothers of Phoenix won the contract and began laying foundations in the canyon and constructing the arch. They completed the project on Oct. 31, 1938.

Northern Arizona boosters celebrated its completion the following year by inviting the public to attend a dedication to be held on Sunday, Oct. 8, 1939. A full-page ad asking everyone to “Be a Booster! This Event Marks a Big Step in the Progress of Better Arizona Highways” appeared in the Coconino Sun two days before.

Dedication day began with a barbecue at the Hart Ranch in Sedona and then everyone drove to the span for a program that included a skit about Midgley’s life acted out by Arizona State College (now NAU) students, music, and speeches by Arizona Governor Robert Taylor Jones, State Senator James E. Babbitt, and Major Midgley, president of the Highway 79 Association. More than 1500 spectators turned out for the two- hour event and even more heard it broadcast live over statewide radio. The variety of musical performers suggests the importance of the bridge to the regional economy as no less than six musical groups, including the Tuba City all-Indian band, Rachel’s accordion band from Cottonwood, the WPA (Work Projects Administration) Mexican Band from Phoenix, Holbrook’s Kiltie Band, Romain Loudermilk’s bunkhouse band from Rimrock, and Fred Harvey’s Cowboy band from the Grand Canyon, joined singers from Arizona State College in Flagstaff and Prescott community performers to commemorate the day. Following these ceremonies, Babbitt thanked Midgley for his lifetime work promoting good roads and named the bridge in his honor. After this, Babbitt’s five year old daughter Mary Phyllis (now 80 and living in California), christened the bridge with a bottle of champagne.

Midgley Bridge remains, along with Navajo Bridge, Salt River Canyon Bridge, and Pump House Wash Bridge, a fine example of a well-preserved, dramatically structured, New Deal- era bridge located in a picturesque setting. Preservationists added it to the National Register of Historic Places when the bridge turned fifty years old in 1989. It is historically significant as the final link in the original state highway 79 (now 89A) connecting Sedona and Flagstaff and as a key component in the area’s tourist industry. (ADOT originally designated the road SR 79 in 1927, then renumbered it US89A in 1940 "to indicate its alternate status to the faster route from Prescott to US 66 in Flagstaff. It lost its US designation in 1992 and became SR89A.)

A six- inch thick memory book of the “Official Dedication,” containing correspondence and other original documents, resides in the Arizona State Historical Society’s collection housed at Cline Library at NAU. And if one looks very closely to their left after they have crossed the bridge heading to Sedona, the original brass plaque can still be seen embedded on a sandstone wall, placed there “by friends to commemorate the dedication, October 8, 1939.”

Michael Amundson is an NAU Professor of History and director of the Public History Program,

What are ‘15-minute cities’ and how will they change how we live, work and socialise?

What are ‘15-minute cities’ and how will they change how we live, work and socialise?

How the airline industry is approaching employee vaccinations

How the airline industry is approaching employee vaccinations

Three Lives: From Ground Zero to Flagstaff in 20 years

Fall in all attendant memories

While much of the city still slept, or sat sipping their coffee, over 100 northern Arizona residents prepared to climb an estimated 110 flight…