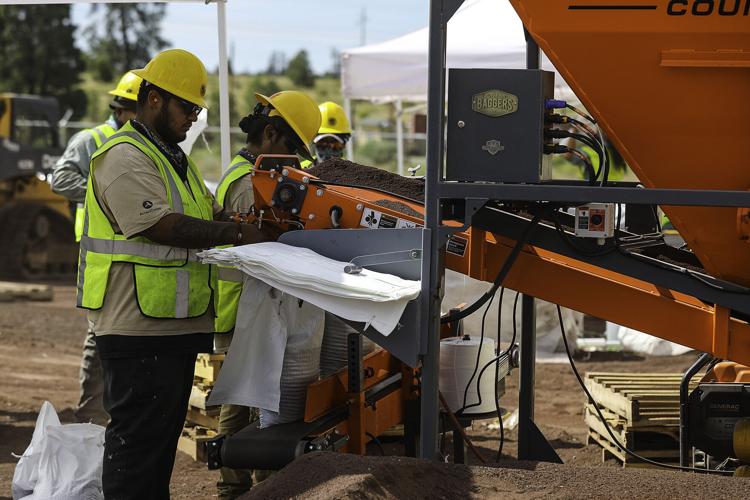 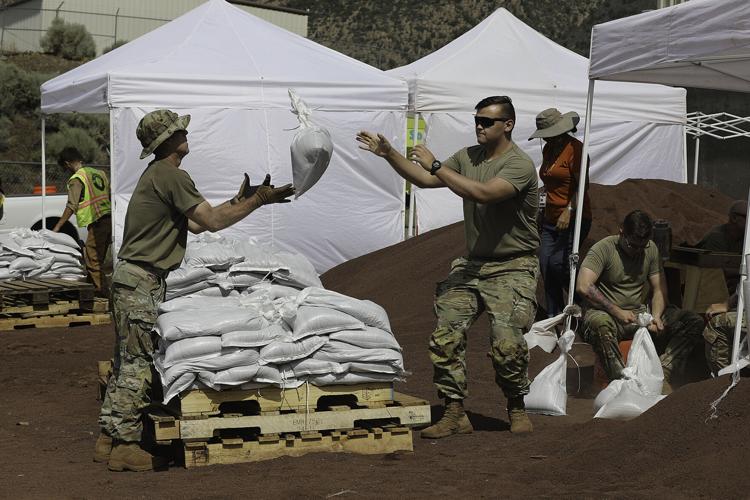 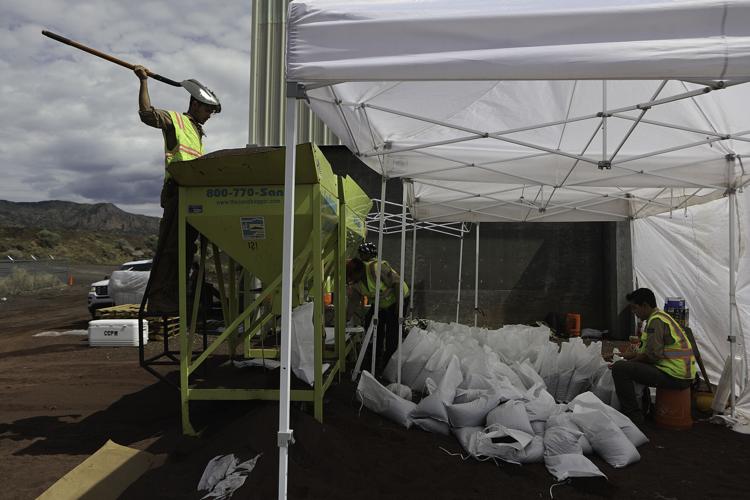 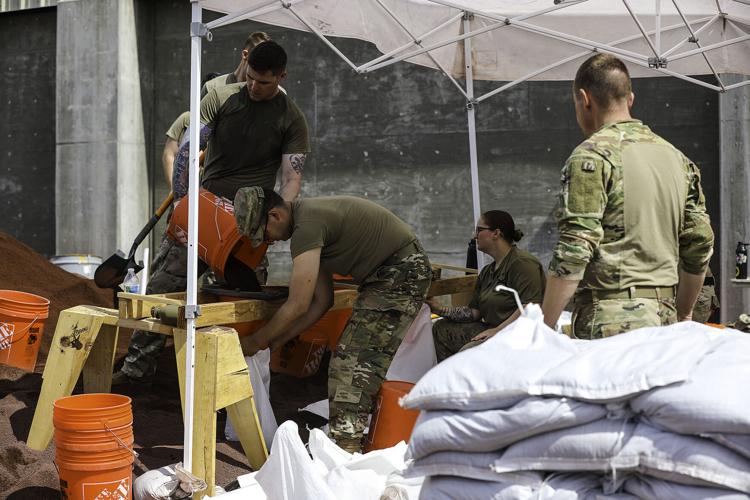 The National Guard, Americorps conservation crews, local volunteers and inmates from regional detention centers have all been enlisted to help Coconino County fill the need of roughly one million sandbags for protection against post-fire flooding.

After the Pipeline Fire ravaged watersheds over several neighborhoods east of Flagstaff, flood models predicted what recent monsoon rains proved to be true: thousands of homes are at risk of serious damage from flooding. The race is on to protect these homes from further damage. The most immediate need is sandbags and the hands to fill them. According to county officials, about 325,000 sandbags have been produced and distributed so far. That leaves at least another 600,000 to go.

Steeped in summer heat, the tedium of dumping shovelfuls of cinders into bag after bag after bag does not make for easy labor, said Conservation Legacy crew leader Katie Dunnahoo. Her crew is from Las Cruces, New Mexico, and is one of several that have been contracted by Coconino County to produce sandbags. Since June, they’ve been stationed out behind the county public works building, where they spend the day deep in red cinders.

“When we first got here, they said our quota was a million,” Dunnahoo said. “It sounded unreachable, impossible — we’re here for the entire summer.”

Dunnahoo’s crew has been working on a nine-day hitch schedule — seven days on, two days off — since they arrived. So far, they’ve worked three hitches and produced an estimated 27,000 sandbags.

“It is hard work,” Dunnahoo said. “We go to our tents sore, don’t even get the best night's rest, then come back out here.”

To make a million sandbags, daily motivation is key, Dunnahoo said. It helps to see their work going directly into the sandbag walls placed around the neighborhoods of Doney Park and Timberline, but recently she’s been drawing on another source of inspiration.

“We had gotten word that a young girl got swept away during the Schultz floods in 2010,” she said. “That's when it became sort of personal — knowing we can help prevent something like that from happening again.”

For Brittany Wilson, co-leader with Dunnahoo, there is an added weight that comes with responding to a fire that scorched the San Francisco Peaks.

“I'm Navajo, and we also have another member of Navajo,” Wilson said. “This is one of our four sacred mountains. It has been pretty hard. We've been viewing it as helping to keep the mountain alive. Just helping, because whenever someone needs help, we should be there.”

Two Ancestral Lands crews from Arizona Conservation Corps joined the sandbag effort last Thursday. These crews were made up entirely of indigenous youth from Zuni and Hopi. For crew leader André Dennis, motivation has come from “setting the bar high” — 2,000 bags a day — and viewing the work as a “puzzle” in need of the most efficient solution.

These conservation crews have added to volunteer efforts organized by the United Way of Northern Arizona. But according to a release sent out by the county last Friday, all these “tremendous” efforts have “not been sufficient to keep up with the increased need for mitigation.” On Friday, Coconino County went to the state and requested priority urgent assistance from the Arizona National Guard through the Arizona Department of Emergency and Military Affairs.

They received some help — about 30 National Guards deployed on Saturday, another 60 on Sunday, and as of Monday there were two crews of 20 working in shifts alongside the conservation crews to produce sandbags.

They expect to continue to the work through Tuesday, but “outside of that, I'm not sure exactly what the plan is. We're kind of taking it day by day,” Cuozzo said.

For the National Guard, motivation to keep slogging through a million sandbags comes from their camaraderie, Cuozzo said. This can be heard in the metal music playing form their tent and the general laughter of ribbing between soldiers.

“A lot of them have served with each other for five, six-plus years,” Cuozzo said. “So that's pretty tight-knit community.”

Cuozzo also tries to maintain a “mission-focused” attitude among the soldiers. Much like the conversation crews, he said it’s key to remember the positive impact their labor will bring by looking to how flooding has impacted the area already.

“Seeing that there was a previous era’s damage, that there's opportunity for us to help mitigate future damage, that’s really our big motivating factor,” Cuozzo said.

Even beyond those that are stationed among the cinders at the county public works yard, there are also roughly 60 inmates producing sandbags for Coconino County in Winslow. Another 100 inmates in Kingman were slated to begin working this week, but there has been a delay of unknown origin, reported deputy county manager Lucinda Andreani. Even so, with hundreds of hands drawing from so many sources of motivation to produce thousands of sandbags by the hour, it would seem that Coconino County has all the help it could ask for.

“Unfortunately, we're continuing to communicate that we need 200 to 250 able-bodied persons to produce bags at a very fast pace if we're going to meet the needs of the communities that are impacted,” Andreani said. Not only does the county need to reach their million, rain events such as those that cause flooding in Doney Park and Timberline last week are showing that more area may be impacted than originally predicted.

“On Saturday we deployed 12 engineers and there was a total of 109 properties that were identified in Pioneer Valley that now need mitigation that we had not previously identified for mitigation,” Andreani said. A million sandbags is just the start, she added.

“After Schultz we had a million and a half to two million bags in Schultz flood area,” Andreani said. “I think we will ultimately approach that level.”

The National Weather Service forecast for Flagstaff calls for a chance of rain each day this week, with the likelihood rising from 20-30% on the weekdays to 50-60% over the weekend. High temperatures will hover in the upper 80s for most of that span.

Sean Golightly can be reached at sgolightly@azdailysun.com.
0 Comments

The 2022 monsoon season in northern Arizona has proved tireless as high likelihoods of rain continue to persist through the coming weeks. With…

Flooding closes US 89 north of Flagstaff

The Arizona Department of Transportation announced US 89 was closed Friday at around 10:30 in the morning. The highway flooded about five mile…

Frances Short Pond, a beloved fishing site and recreational area in Flagstaff, has been drained several feet to serve as a retention basin for…

Northern Arizona Healthcare announced today that Florence Spyrow has stepped down as the system president and chief executive officer.

One person killed in Thursday night crash on westbound I-40, east of Flagstaff

A motorcycle passenger is dead after a crash on I-40 westbound, 11 miles east of Flagstaff.

'Detention is not good for kids': How Coconino County is doing things differently for Flagstaff youth

This past year, Coconino County Juvenile Court didn’t send any kids to the Department of Corrections, as the average population of young peopl…

*Update: Isaiah Miller has been found and safely returned to his family. Police were able to locate him by 7 p.m. Monday night.