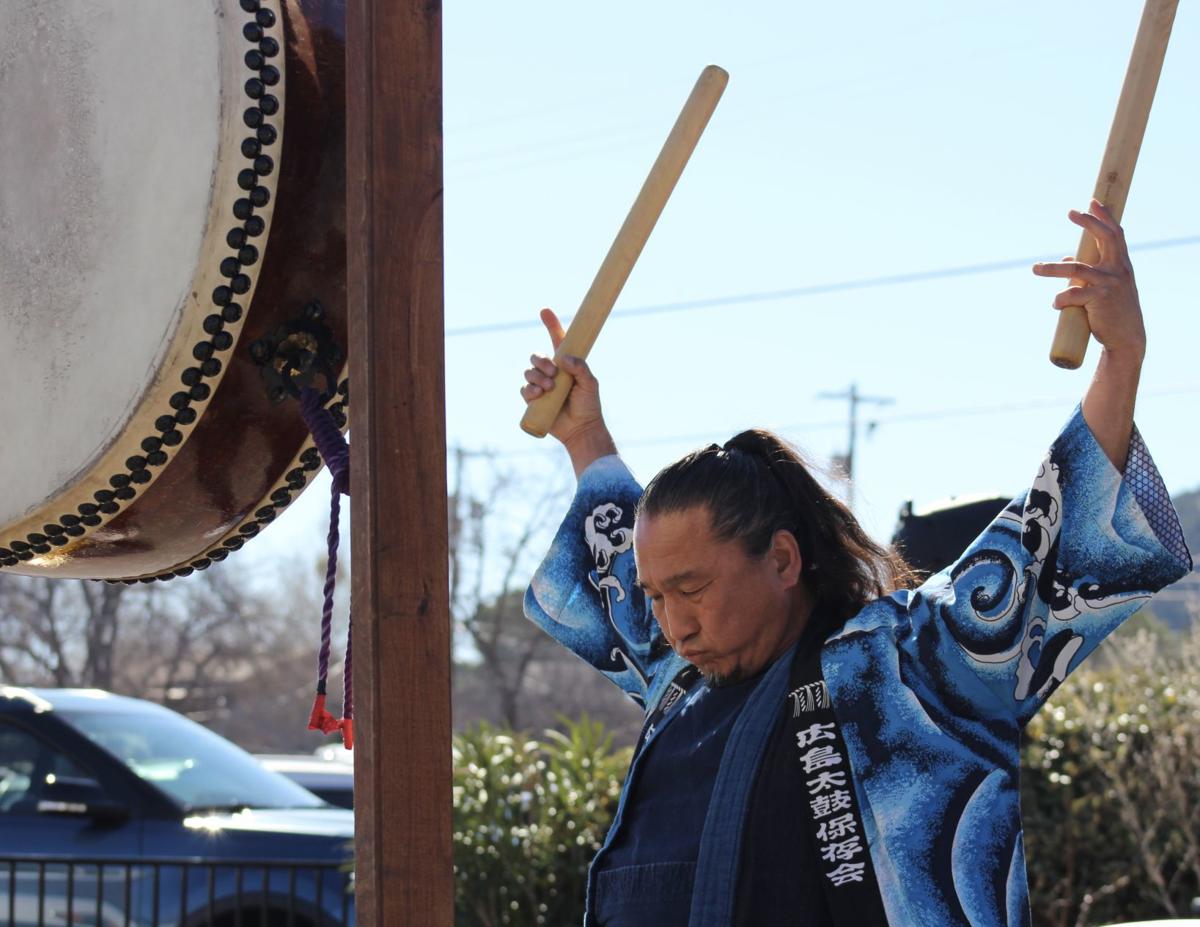 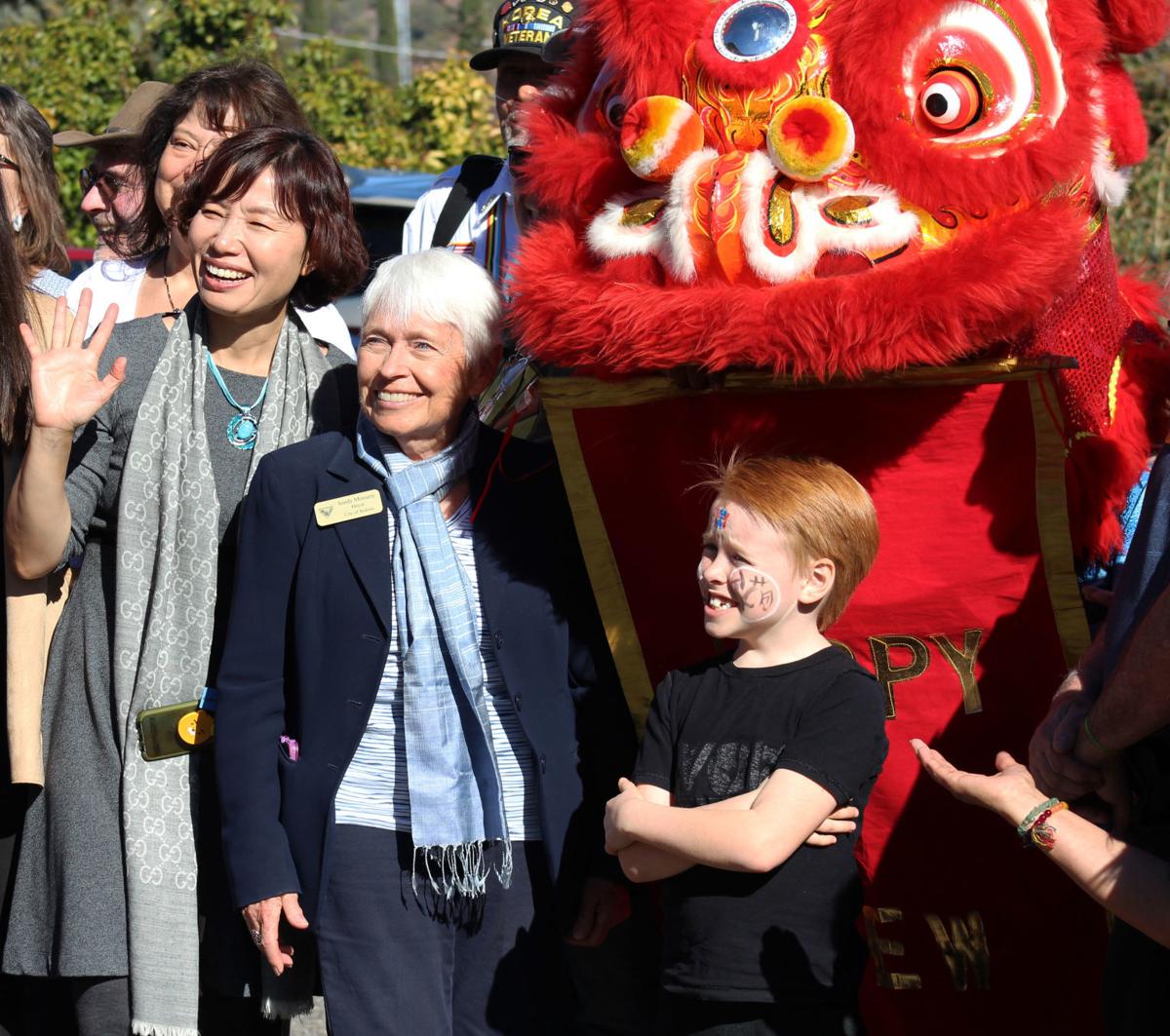 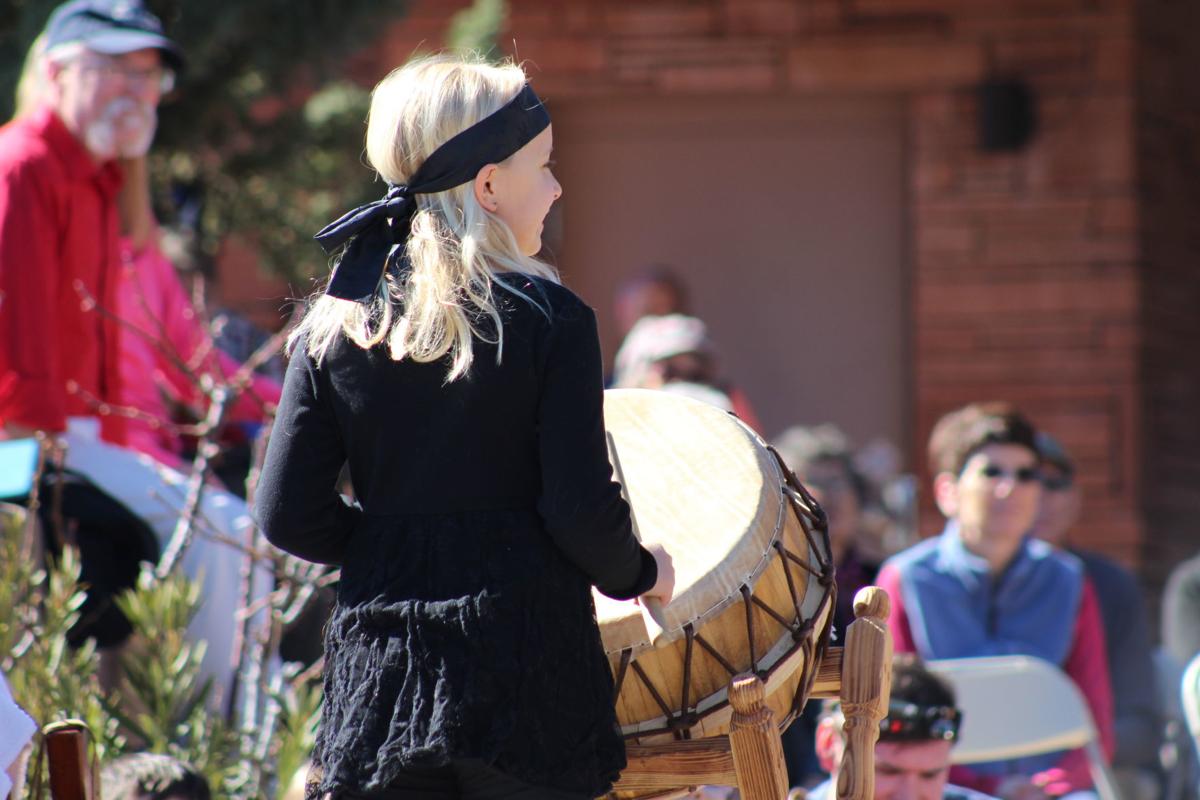 Elizabeth Kraus plays a drum and smiles toward the crowd during Lunar New Year festivities Saturday in Sedona. 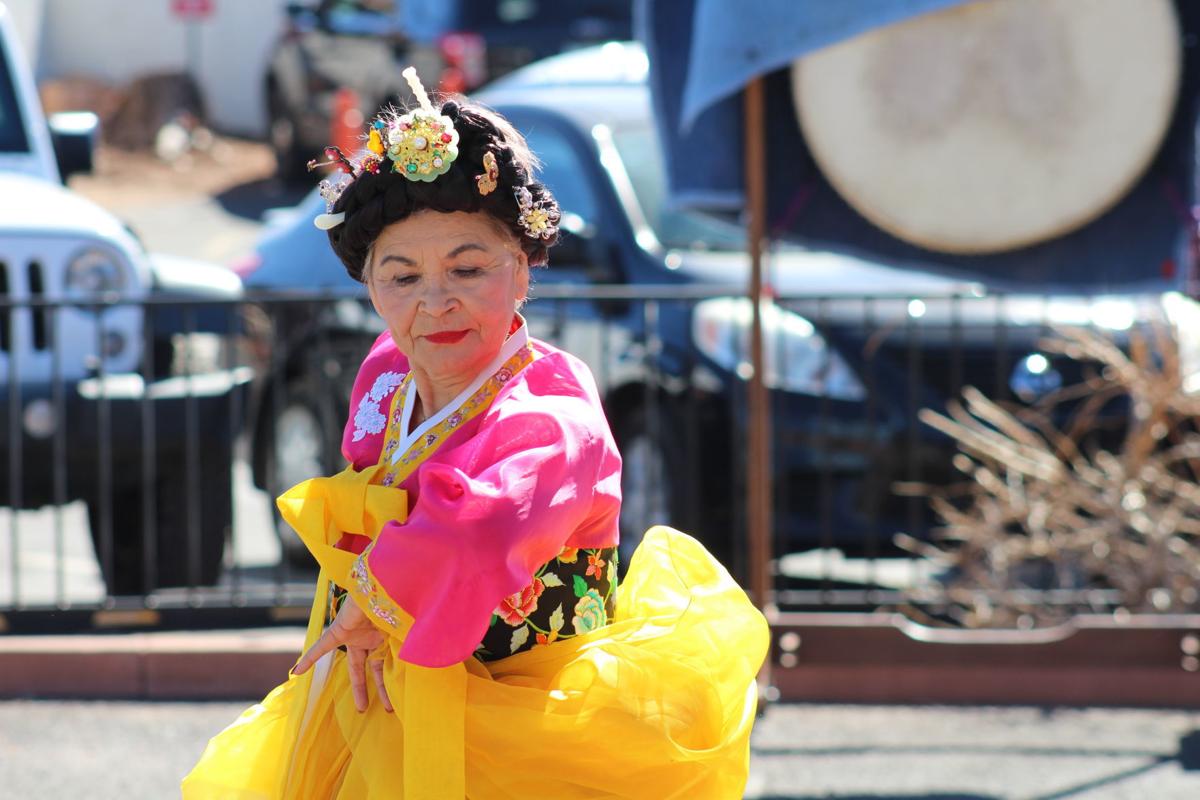 Euhee Lee pauses during her Korean dance, the first of three traditional acts conducted at the festival. 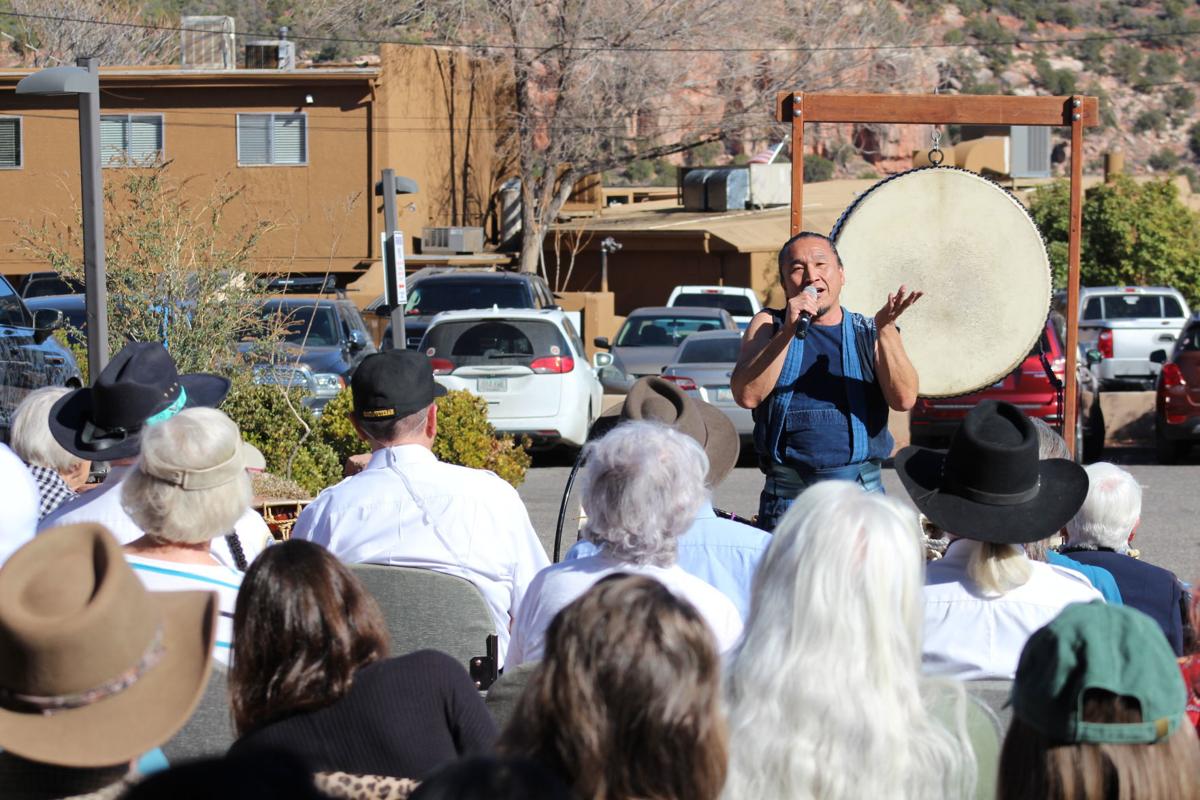 Thousands of years ago, the emperor threw a party, Sandy Moriarty explained to the crowd. Moriarty, the mayor of Sedona, said part of the Lunar New Year tradition started when 12 animals attended the emperor’s gathering, and the order in which they arrived was forever recorded and shared. The Year of the Rat, including 2020, stems from this treasured narrative.

According to the tale, the first two animals to enter were the rat and the ox, who traveled together. Moriarty added that the rat rode on the ox’s back, immediately jumped off when the duo arrived and walked into the party mere moments before the ox — becoming the original attendee. This order designated the rat as the first animal of the Lunar New Year, a tradition still practiced today.

Three traditional dances were observed, each with different meanings. The first performance offered a connection with nature, the second created a sense of community and the third welcomed good spirits. Additionally, each of these themes symbolized hopes and ambitions for the upcoming year.

These festivities, such as the ethnic dances, offered a chance for the community to come together and look ahead, Moriarty said.

“Lunar New Year is a time for new beginnings,” Moriarity said. “It’s a great way for people to unite and share each other’s cultures.”

Wan-joong Kim, Consul General of the Republic of Korea in Los Angeles, also sent a congratulatory message to the hosts and attendees of Saturday’s event. In his letter, the Consul General explained the importance of progressing communally and celebrating traditionally.

“In this holiday, we celebrate our ethnic heritage and share the joyful moments with our neighbors,” the letter read. “It is my sincere hope that the Korean American community not only progresses and enriches itself, but also contributes to the regional prosperity and cultural diversity along the way.”

Saturday’s event was hosted by the Sedona Korean American Association (SKAA), and all proceeds were donated to the Earth Citizens Organization (ECO), an establishment promoting the protection of this planet and the commitment to all people within it.

Dami Kim, president of SKAA, said she invited her neighbors and friends to the Lunar New Year festivities. By extending open invitations and warm welcomes to everyone in the community, she said the celebration grows bigger annually.

“Every year it’s getting better,” she said. “Today I see new faces and more involvement — helped by restaurants and businesses — from the community.”

Paul Yanson, director of sustainable solutions and natural health classes for ECO, said Lunar New Year is based on the Korean spirit of hongik, which translates to widely benefiting all.

“Hongik means that I don’t just live for myself, I live for other people,” Yanson said.

Part of ECO’s mission, Yanson explained, is to cultivate 10 million Earth citizens. Theoretically, this globalized group could transcend any ethnic or religious boundaries; instead, Yanson said they are introspective and harmonized, leading sustainable lives.

If the planet’s population reaches 10 billion people, ECO’s concept of 10 million Earth citizens would comprise 1% of the overall demographic. In turn, these citizens could change society’s trajectory and significance through the principle of critical mass, Yanson said. By having a noticeable number of Earth citizens, the group’s influence could spread and magnify.

“If we can get 1% of the population to care for themselves and other people, then hopefully that will create a shift — and a ripple — that will inspire other people to do the same,” Yanson said.

Earth citizens typically experience a three-step journey, Yanson added. The first stage is knowing one’s true self through healing and happiness. Next is the creation of a vision, which involves taking an individual’s disposition and applying it to a greater context and meaningful plan. Finally, taking action emphasizes executing this ambition, Yanson concluded.

Dami Kim also spoke about this process, labeling it as the transition from individualism to collectivism. As someone who grew up in South Korea, she explained that her emotions and conscience were suppressed by other standards: competition, egoism and stoicism being among them. Collectivism, alternatively, promotes greater acceptance and honest communication, Dami Kim said.

“A lot of times, people try to be positive and change their emotions right away without accepting the negatives,” Dami Kim said.

“Just as lotus flowers bloom out of murky, muddy water, so can the struggles and suffering we feel in different environments be the sustenance that causes our souls to grow,” the book reads.

The Lunar New Year celebration was centered around this acceptance of the past and application to the future. As the calendar continues to turn, 2020 represents a clear opportunity to appreciate the quantity and quality of people, Dami Kim said.

Mindfulness and meditation are effective methods for becoming more aware of this existence, Dami Kim added. It establishes a balance between the body and mind, which can also contribute a greater connection to humankind, nature and the world entirely. Ultimately, embracing these adaptations is a decision, and life is full of them.

“We waste a lot of time regretting the past … If you can change again anyways, why are you still holding onto it?” Dami Kim questioned. “Every moment, you can have choices.”

Elizabeth Kraus plays a drum and smiles toward the crowd during Lunar New Year festivities Saturday in Sedona.

Euhee Lee pauses during her Korean dance, the first of three traditional acts conducted at the festival.