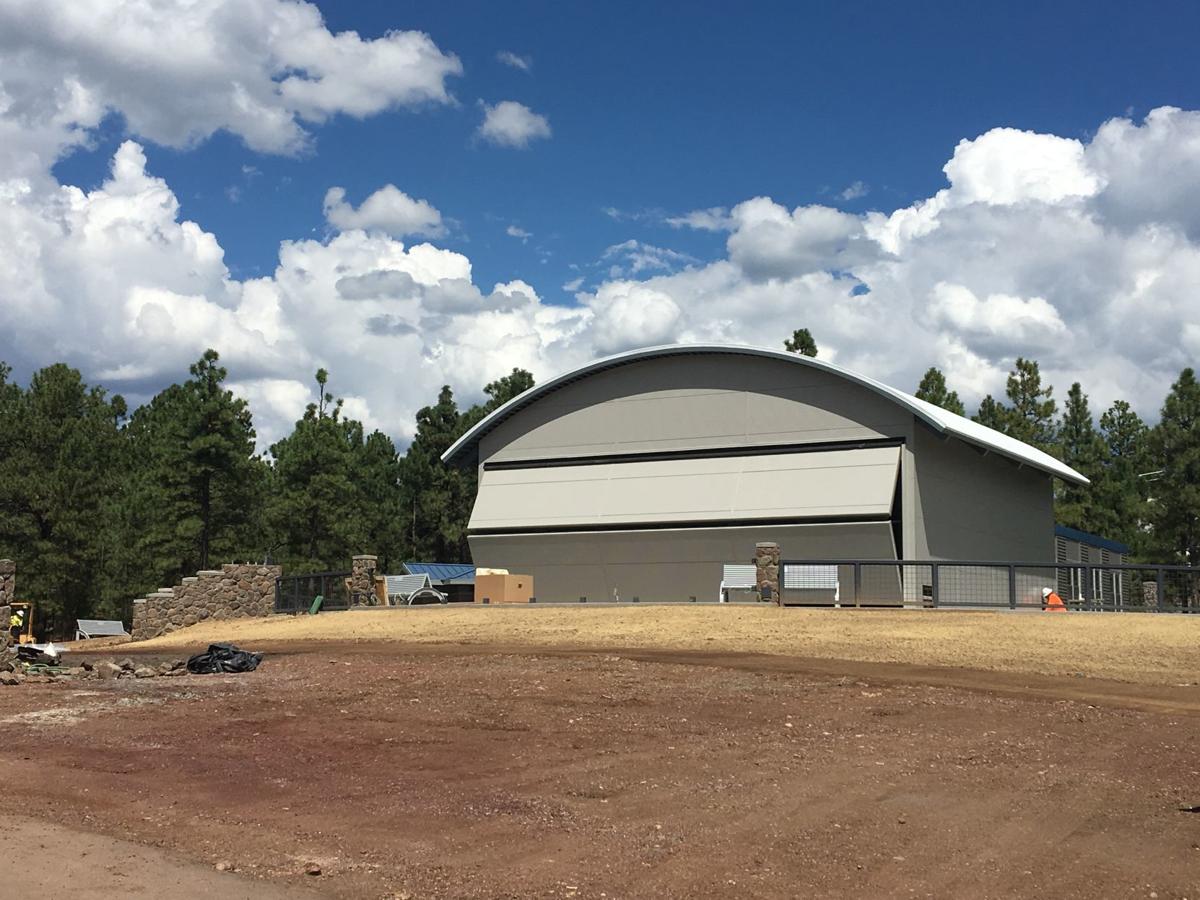 Architect's rendering of the Astronomy Discovery Center at Lowell Observatory.

With just less than a month before the Giovale Open Deck Observatory makes its public debut, Lowell Observatory staff are moving on to the next phase of the Mars Hill master plan.

The new observatory’s grand opening is Oct. 5, during which free admission will be offered all day. Each of the six new telescopes will be unveiled, one per night, in the week leading up to the opening.

In the master plan for the Mars Hill development, the open deck observatory is the first phase, followed by the Astronomy Discovery Center to replace the 25-year-old Steele Visitor Center – which has exceeded its capacity – as the arrival and exhibit hub for guests.

“In the early 2000s when we signed the contract with Discovery Communications to build the Discovery Channel Telescope, that changed Lowell forever,” Lowell historian Kevin Schindler said.

He explained that creating and maintaining the $53 million telescope prompted the ongoing expansion of the observatory, which welcomed more than 100,000 visitors last year.

Although the Mars Hill campus sits on 750 acres owned by the nonprofit, Schindler said the goal is not to develop it all.

“We’re looking how to strategically take advantage of our resources and do it in a way that works with our community,” he said. “We’re making more space, but we also want to offer something really unique and inspiring, something that gets people to get in touch with the universe around them.”

The open deck observatory project broke ground Sept. 29, 2018 and is now receiving its final touches, including the installation of its exterior nameplate to commemorate the project’s initial donors, John and Ginger Giovale.

From the exterior, the observatory looks like a futuristic garage, with a door that folds up in the middle before the entire shell on the front half of the building slides back over the facility’s classroom and workshop spaces.

Plinths made of malapais rock – matching that of existing structures like the Pluto Dome – are placed along the walkway surrounding the building. The shadows formed by the plinths will align with stone circles on the ground during the solstices and equinoxes.

A new restroom and drinking fountain just outside the observatory will prevent visitors from having to make the trek back to the visitor center for amenities. Utility lines have also been installed in the open space surrounding the observatory for use in catered events.

From the deck, visitors will be surrounded by the observatories that came before it, including the Pluto Dome, 18” Astrograph Dome and the Lampland Dome.

Joining the telescopes housed in these historic sites, six new telescopes (all but one made in the United States) have homes in the Giovale Open Deck Observatory, where they are affixed to the concrete for use in public events as well as research.

One of the six, the 32-inch Starstructure Dobsonian reflector, is now the biggest telescope on Mars Hill. It collects nearly twice the amount of light as the 24-inch Clark refractor and uses a quartz mirror instead of a glass mirror, another new feature to Mars Hill.

Jim Cole, senior public program educator, said quartz mirrors are beneficial in a high desert like Flagstaff because they cool quicker and do not generate as much of their own heat.

“If your mirror stays hot, it gives off heat waves like a desert road,” he said.

The Starstructure Dobsonian reflector can be used to view deep sky objects like galaxies and star clusters. In contrast, the new 8-inch Moonraker Victorian Refractor – with a custom, ruby sheen – provides detailed glimpses of the moon and nearby planets.

The other four telescopes can see everything in between. Some have attached instruments for improved viewing and research, like a new 14-inch reflector with a video camera that can record the color of distant objects.

A small workshop in the observatory will allow Lowell staff to repair and maintain these devices as needed.

Beyond telescopes, the open deck observatory will also offer other interactive experiences for guests, like a spectroscopy exhibit featuring a programmed display that will ask visitors to identify different spectra samples before revealing where they have been found in the universe.

Education Director Samantha Gorney, who is finalizing the exhibit, said spectra, the “unique fingerprints in light” of different elements, make spectroscopy the heart of astronomy. Fittingly, she is placing the spectroscopy exhibit at the center of the observatory.

One of the new telescopes will also be attached to a spectrograph, allowing visitors to see this study in action.

“You’ll see what an astronomer sees. They’re not looking at beautiful images most of the time. They’re looking at graphical displays or numbers,” Gorney said.

Although the entrance to the open deck observatory currently faces the campus’s machine shop just behind the Putnam Collection Center, it will eventually be accessed from a plaza connecting it to the $29 million Astronomy Discovery Center.

The center is scheduled to open in 2023 and will be named after the Kemper and Ethel Marley Foundation, which recently contributed a $14.5 million grant to the project, the largest single gift the observatory has ever received.

The three-story visitor center and an adjacent parking lot will increase the observatory’s capacity to 250,000 guests per year. Once the center is created, the Steele Visitor Center will be used instead as a space for meetings and small events.

A gift shop and various exhibits will be placed on the first floor of the new center, with meeting space on the second and an open viewing dome on the third, Schindler said.

This natural planetarium dome, the Dark Sky Planetarium, will allow for presentations using the view from Flagstaff, while the Universe Theater inside the center will combine live presentations with video projected onto a wrap-around screen.

The planetarium will have heated seats to keep presentations going in the winter.

Though the building’s outline is already designated with pink flagging tape, Schindler said construction will not begin until the project is 80% funded.

To make room for the new visitor center, though, the current machine shop will need to be moved first.

Technical Project Manager Dave Sawyer said the new “tech center” – featuring a larger machine shop and instrument lab – will better allow Lowell staff to service and create instruments for the telescopes and technologies on its properties, including the massive Discovery Channel Telescope in Happy Jack.

Sawyer said instruments for this 4.3-meter telescope have previously been created by partners like Yale University.

Beyond this second phase, plans for future development of Lowell Observatory remain unclear. Schindler said a restaurant and community theater have both been suggested.

In the meantime, the campus will see smaller improvements like the replacement of the 16-inch McAllister telescope with a 20-inch Planewave Telescope, scheduled to occur after completion of the Giovale Open Deck Observatory.

Lowell Observatory will host various free presentations and an open house during the Flagstaff Festival of Science from Sept. 20-29, 2019. For a schedule of events, visit www.scifest.org/events/.

For historians, archivists and librarians, protecting artifacts is a job requirement, especially in northern Arizona, where wildfires, snowsto…