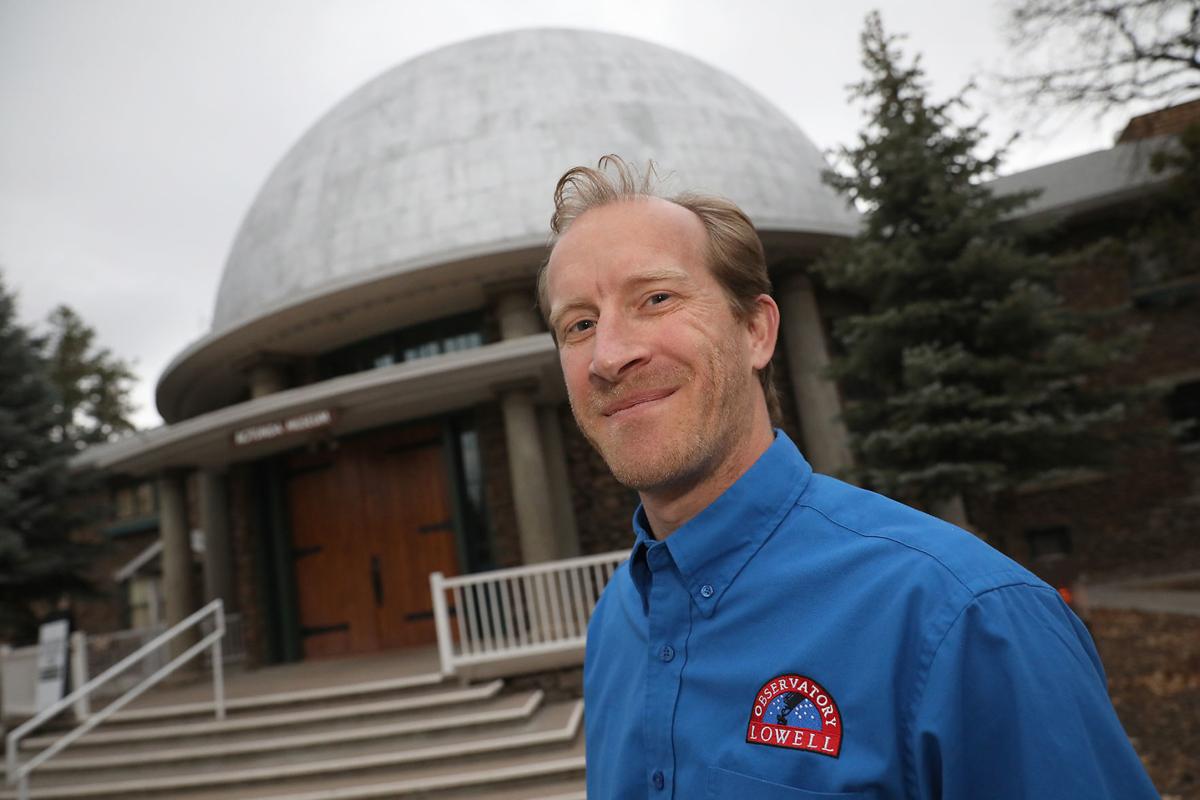 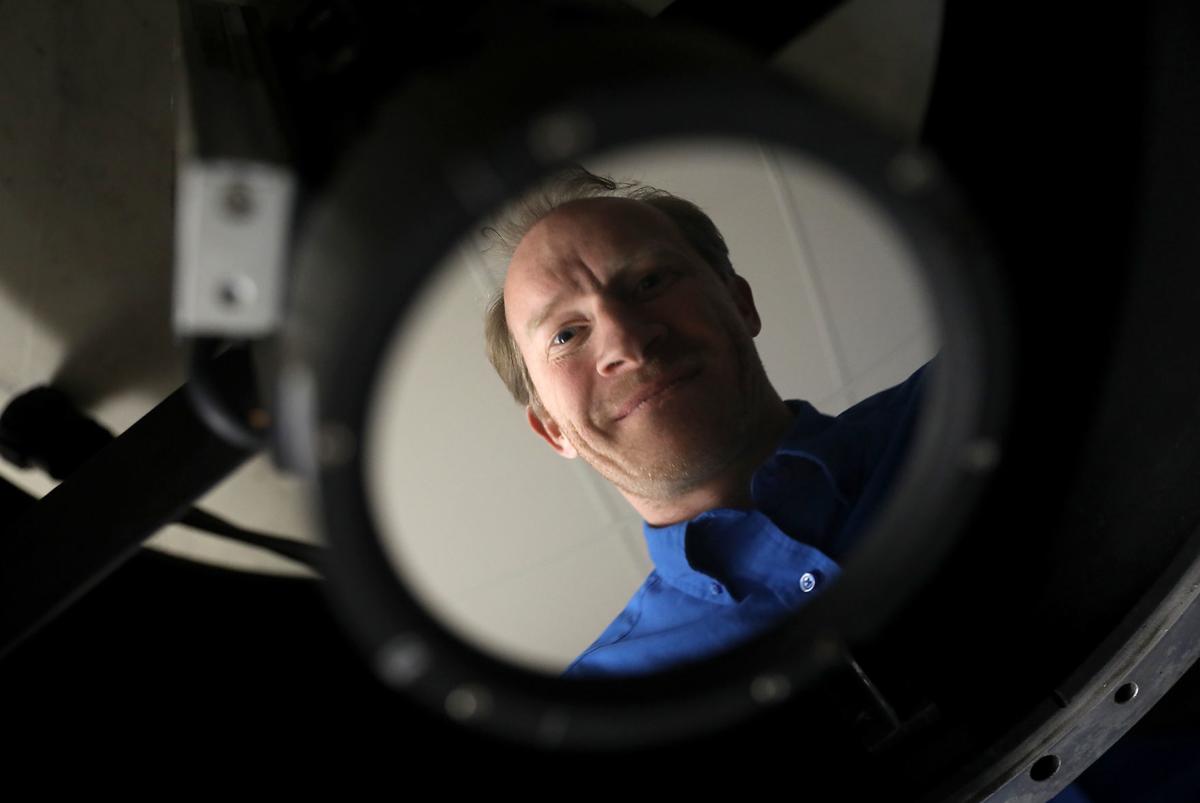 Lowell astronomer Kyler Kuehn, seen reflected in the mirror of a telescope, recently discovered one of the fastest moving stars ever, named S5-HVS1.

“One scientist’s noise is another’s data,” says Lowell Observatory’s Deputy Director of Technology Kyler Kuehn, one of the astronomers who discovered the fastest moving star ever recorded -- accidentally.

The star, named S5-HVS1, is moving at about 1,000 miles a second, a speed achieved when it was flung from the supermassive black hole at the center of the Milky Way.

“The galaxy, on its own, just isn’t massive enough to accelerate stars this fast in a regular orbit, but there are scenarios like this that can increase speed,” Kuehn said.

According to a report released last week by 20 scientists with the Southern Stellar Stream Spectroscopic Survey (S5), the star is moving twice as fast as most other speedy, “hyper velocity” stars and was able to be traced back to this black hole directly.

“It is the first star with such a confident identification,” the team wrote.

They believe the star’s speed was caused by the loss of its partner binary star to the black hole’s gravitational force. As the two stars were orbiting around each other, one was pulled toward the black hole, possibly settling into orbit around it, disrupting its bond with S5-HVS1. As the bond between the two stars was lost, S5-HVS1 was flung out into the galaxy as if it had been launched by a slingshot.

This concept, a 30-year-old theory known as the Hills mechanism, had not been proven until now.

“We figured [the theory] was probably right, but we never had smoking gun evidence before this,” Kuehn said.

In terms of size and brightness, though, the star is rather typical compared to other stars discovered in the galaxy. It is believed to be a main sequence star, like the sun, that fuses hydrogen atoms to form helium in its core.

The S5 project was formed by a group of researchers who aim to study the Southern Hemisphere’s stellar streams, groups of orbiting stars that once formed a small galaxy or cluster but were pulled apart by other sources of gravity.

Kuehn said the group is hoping to use information about these stellar streams gathered by the Anglo-Australian Telescope to help determine the mass of the Milky Way, which is not uniform throughout, but rather has a “clumpiness” that varies depending on the objects -- or dark matter -- present in different parts of the galaxy.

S5, as a whole, is a side project of the Dark Energy Survey in Chile, Kuehn said, but has grown to encompass his scientific career. Most of his overall work relates not to discoveries themselves, but to the engineering behind them. He has helped to create a variety of products like the Dark Energy Camera and is currently working on a device that could filter out the glow that is trapped in the Earth’s atmosphere at night, making observations easier for astronomers.

For this project, though, Kuehn was able to spend some time making observations with the Anglo-Australian Telescope. Whether he was there the night the team documented S5-HVS1 remains a mystery, though.

S5-HVS1 was first observed in August 2018 “as part of regular S5 observations” of a stellar stream, the report states, and again eight months later to confirm many of its characteristics. It is now estimated to be about 7,000 light years below the pancake-shaped galaxy, Kuehn said, but still within the surrounding galactic halo, a position the astronomers believe took the star nearly 5 million years to reach.

Although its orbit was disrupted by the black hole, Kuehn said it is unlikely the star will collide with another object because of the vast distance between interstellar objects within and outside of the Milky Way.

“It’s gotten enough of a kick that it’s going to leave the galaxy entirely and go somewhere else,” Kuehn said. “Maybe there’s another galaxy along its path, maybe there isn’t.”

Though the discovery was not the goal of S5’s research, the star -- and others like it, when they are found -- could be valuable to their work on the mass of the galaxy. Kuehn said, if the star’s path is tracked, astronomers can use any curves in its path to determine the presence of something with gravity, like another star or dark matter.

“One of the things that gets me excited about science is that the things you don’t expect that you end up discovering. That’s where the fun is for me,” Kuehn said.

In April 1981, a 32-year-old software developer in Washington State invited a colleague to join him on a trip to see the first launch of NASA’…

On Monday, Nov. 11, Mercury and Earth will partner with the sun in a celestial swing dance known as a transit of Mercury, when this planet wil…

Seven weeks ago, an amateur astronomer scanning the skies from his personal observatory on the Crimean Peninsula discovered a comet that quick…

Science, of course, is all about looking forward and moving ahead, about innovation and exploring possibilities. But there is merit in occasio…

Lowell astronomer Kyler Kuehn, seen reflected in the mirror of a telescope, recently discovered one of the fastest moving stars ever, named S5-HVS1.