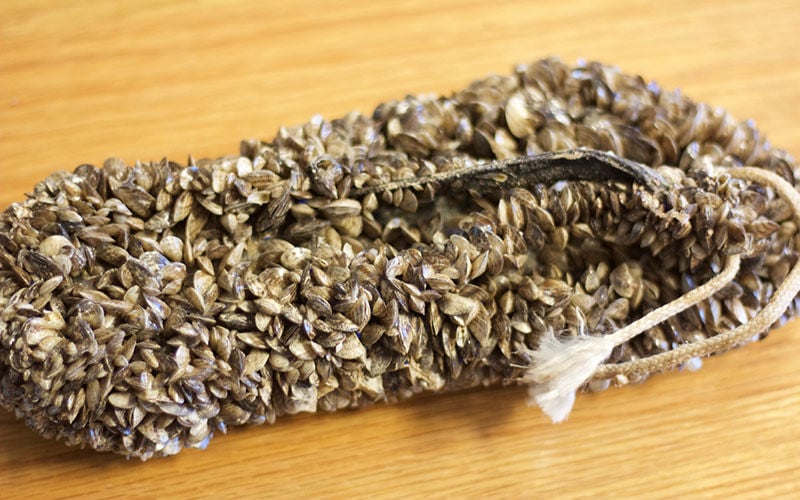 A flip flop covered in quagga mussels is pulled from Lake Powell in this 2017 file photo. 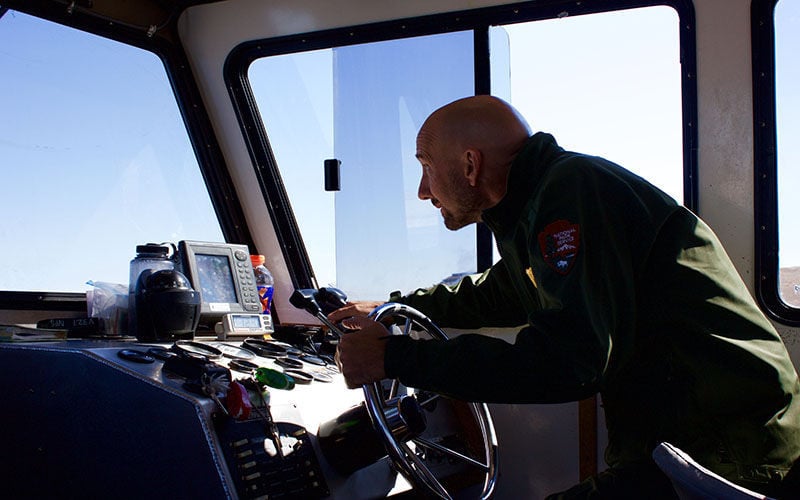 Mark Anderson has been with Glen Canyon for nearly two decades 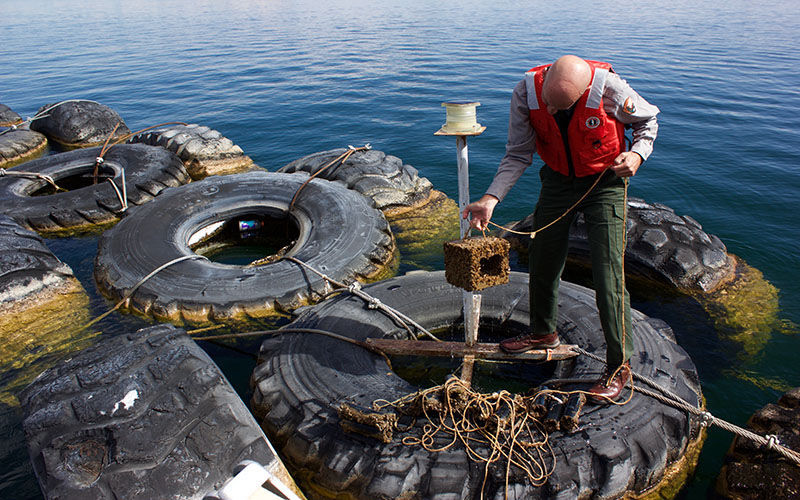 Mark Anderson pulls a quagga mussel monitoring device from dozens of feet below the surface of Lake Powell.

PAGE – Ecologist Mark Anderson still sometimes tears up thinking about March 3, 2013, when an adult quagga mussel was discovered — the definitive sign of a possible aquatic apocalypse — clinging to a boat hauled from the waters of Lake Powell.

“We had finally lost the long-fought battle,” Anderson said.

The adult quagga mussel finding, coming less than a year after microscopic mussels were first spotted, marked the end of more than a decade of attempts to keep the invasive species from taking over Lake Powell and cued the beginning of a new fight.

Experts deem it impossible to entirely eradicate the mussels from Lake Powell, a tourist destination that spans Utah and Arizona. The mussels latch on to the walls of Glen Canyon Dam and the hundreds of boats skimming the lake’s waters. If the mussels could not be removed from the lake, the experts concluded, at least they might contain the threat to keep it from spreading to other waters.

Clumps of quagga mussels damage the dam’s water flow, undercut an ecosystem for other aquatic species, cling to boat engines and cost millions of dollars to handle.

The quagga mussel, a freshwater mollusk that likely was unwittingly brought into Lake Powell by boat, have proven to be a small but mighty foe. Less than three years after finding that mussel, the invasion had spread throughout most of the 186 miles of Lake Powell. Today, quagga mussels can be found in every canyon crevice, Glen Canyon officials said.

Quagga mussels are prolific. They layer by the hundreds onto buoys, docks and boats on the lake, requiring 3,000 pounds of pressure and 140-degree water to remove, Allen said. Thousands of mussels are plastered on the walls of Glen Canyon Dam, disrupting the flow of water that provides hydroelectricity to several states including Wyoming, Colorado and Nebraska. A A single mussel can also filter up to one liter of water a day – a process that removes oxygen and nutrients vital to the survival of other water creatures in the food chain, Anderson said.

More than $1 million a year has been spent on containment efforts since the infestation was first discovered, Allen said.

“It can totally flip the ecology of a place on its head,” Anderson said. “There are few things that you can do that are as damaging to a body of water than to bring something in that it’s never seen before.”

Organizations in Arizona, Utah and several other states are working together on containment efforts that include inspecting boats, educating boaters of the infestation, bolstering staff, levying costly fines to uncooperative boaters and investing in decontamination equipment.

Decontamination units, basically trailers filled with high-tech equipment boasting $700,000 price tags, are now at major marinas. Fines vary, but can reach $5,000 for boaters who don’t comply with the inspection and decontamination process.

All boats must be decontaminated when leaving and entering Lake Powell. Officials created a “clean, drain and dry” program to make sure a boat’s exterior and interior is completely dry before they go out on the water and once they return so the mussels aren’t transferred. Without water, the mussels have a short lifespan.

More than 400,000 boat launches and returns to marinas happen annually at Lake Powell, Allen said. In one busy day, a single marina at Lake Powell can experience more traffic than most lakes will in an entire weekend.

“These mussels don’t move themselves. It’s not like they pick up and walk from one body of water to the next,” said Anderson, who is also the branch chief of the aquatics program. “Boats have to move them.”

Launch ramp staff inspect every inch of boats for mussels and make sure plugs are pulled to allow for internal water to drain from the boat.

It took some time for boaters to warm up to the inspections and decontaminations, but now most realize the importance of the process, Allen said.

Inspections take less than 10 minutes for most smaller boats, but large houseboats that are usually brought to the side for inspection could take hours to fully decontaminate. On busy summer days, when lake-goers are eager to get onto the lake or return home after a long day on the water, the wait can be irritating.

“If you’re a boater, you should get on board with preventing the spread of it. It’s the right thing to do and in reality it doesn’t take that long,” said California resident and boater Mike DeNicola. Mike and his wife, Reggie, have visited Lake Powell for more than 25 years.

The inspection and decontamination process has never deterred them from returning.

Quagga mussels are even easier to transport unknowingly in their early life stages when they are undetectable to the human eye. Veligers, as they are called in their microscopic state, are about one tenth of a millimeter – one-tenth the thickness of a credit card, Anderson said.

One liter can contain hundreds of the microscopic mussels.

Veligers can easily slip past inspectors, hiding in water inside boat engines and other out-of-view places, becoming what lake staff call “aquatic hitchhikers.”

Cleaning, draining and drying a boat is the only real defense against transporting quagga mussels.

“We as man(kind) are the ones that move these species around, and we need to help folks understand that we can be part of the solution, not the problem,” Allen said.

A flip flop covered in quagga mussels is pulled from Lake Powell in this 2017 file photo.

Mark Anderson has been with Glen Canyon for nearly two decades

Mark Anderson pulls a quagga mussel monitoring device from dozens of feet below the surface of Lake Powell.