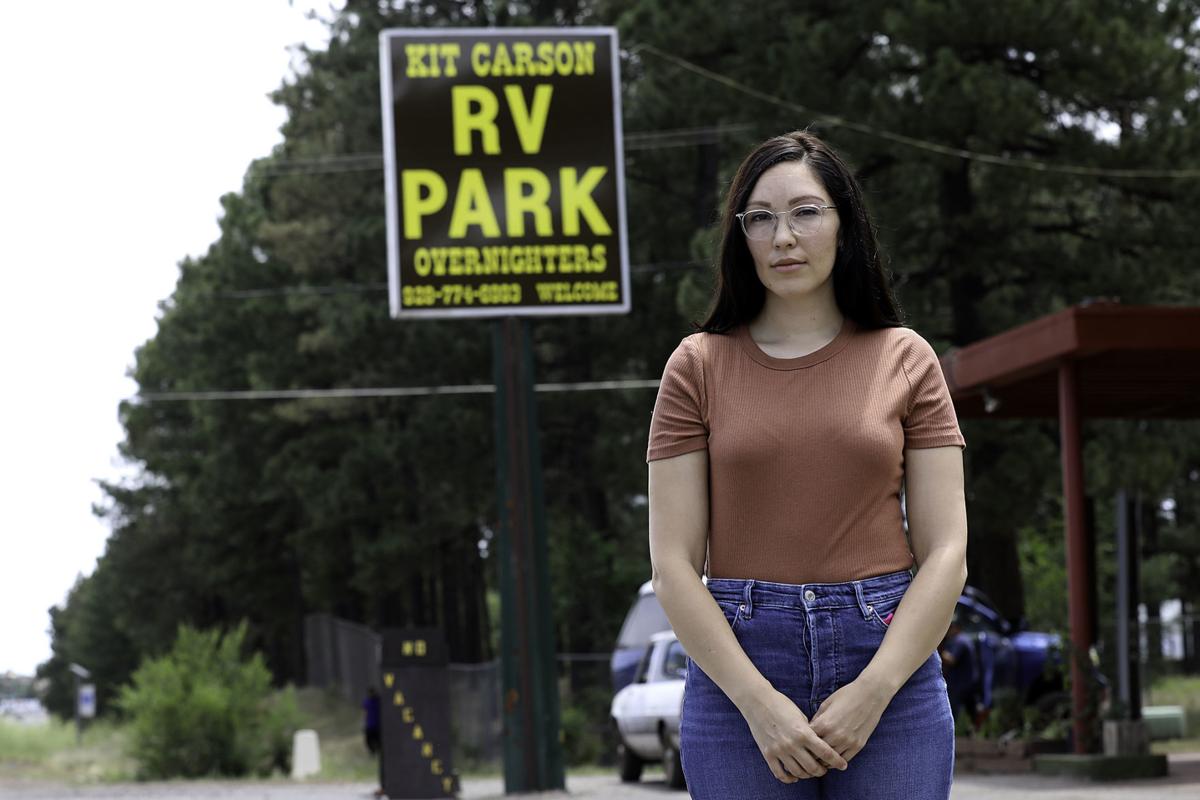 Adriana Orman stands outside of the 102-year-old Kit Carson RV Park in Flagstaff Friday morning. Adriana has started a petition to rename the park due to Kit Carson’s particiaption in the campaigns against the Apache and Navajo peoples, inlcuding the Long Walk of the Navajo, during the American Civil War. 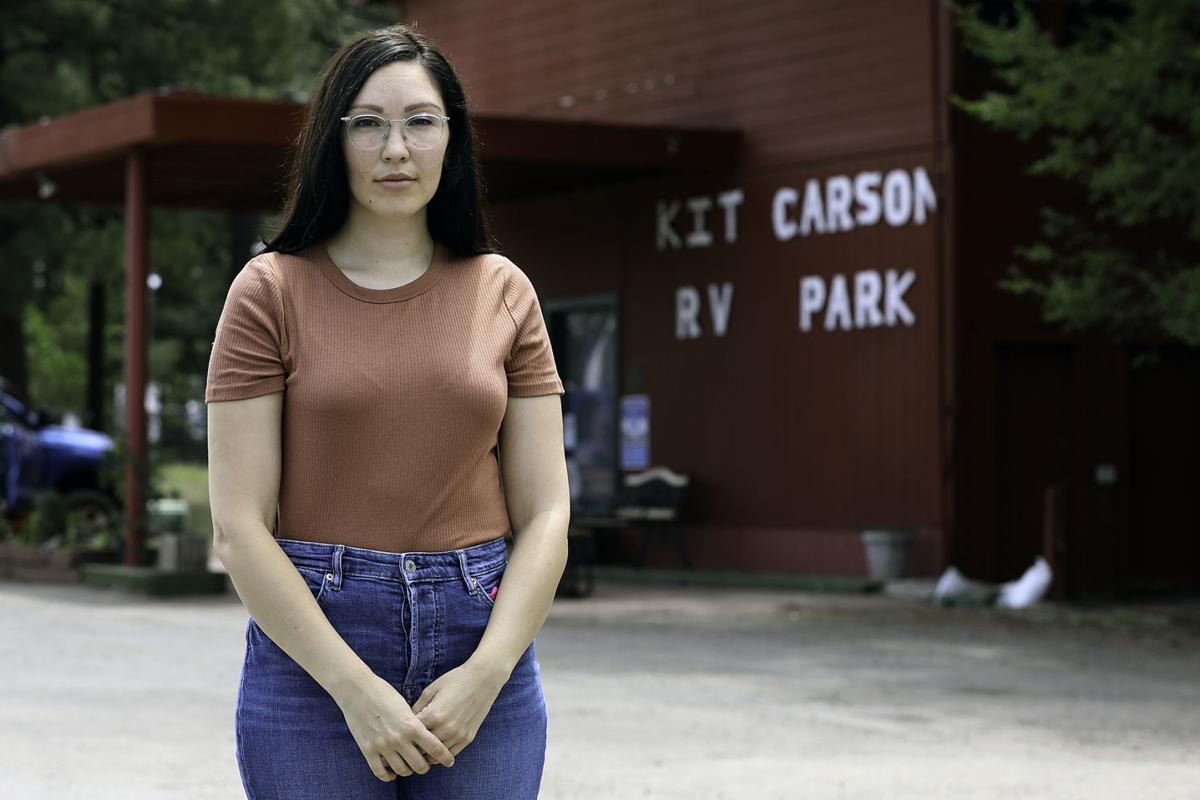 Adriana Orman stands outside of the 102 year old Kit Carson RV Park in Flagstaff Friday morning. Adriana has started a petition to rename the park due to Kit Carson’s particiaption in the campaigns against the Apache and Navajo peoples, inlcuding the Long Walk of the Navajo, during the American Civil War.

Myra Henry and Adriana Orman began the petition last month to change the RV park’s name because of Carson’s role in leading a brutal campaign against the Navajo tribe and The Long Walk.

The park’s management declined to comment on the petition, which has just over 600 signatures.

Henry, who is Navajo, said she has been bothered by the park’s name ever since she moved to the city.

“I moved here in college about 10 years ago and I had to drive by Kit Carson RV Park a lot. And it was kind of a sour image to see knowing what I know about him,” Henry said. “It’s a hurtful thing to see him glorified.”

Orman said neither of them have anything against the people who own it or live there and hope the park’s owners change the name. She said many know Carson as a legendary icon of the old west, venerated by films, comics and honored on place names like the RV park. But that perception leaves out the role Carson played as an agent of the federal government subjugating Native peoples.

In 1863, then a colonel in the U.S. Army, Carson led a scorched earth campaign against the Navajo people, burning homes and killing livestock, all on behalf of the federal government.

By the next year, about 8,000 Navajo men, women and children had been captured or surrendered and were forced to walk over 300 miles to Bosque Redondo in eastern New Mexico.

There, they were held in what amounted to an internment camp for four years, during which time nearly a third of those living there died of disease, exposure and hunger, according to NPR.

And Orman said that history is why she feels the RV park’s name should be changed.

“I think some people have this romanticized view of Kit Carson, that he was this western hero,” Orman said. “I think it’s just such an insult to the Native American community to keep that name.”

Henry said she thinks about her nieces who are 10 and 11 years old and about to begin learning about some of this history.

“They're going to see this and [wonder] ‘Well, why is he being celebrated? Why do we have an RV park named after him?" Henry said. “Things like this really do impact the mindset of Native Americans growing up today.”

By petitioning to change the name, Orman said they are by no means trying to erase this history, but instead are doing the opposite by trying to educate residents about all of Carson’s actions.

And both Orman and Henry said this feels like the right time to change the name, when the country is grappling with numerous historical figures whose actions could be seen as reprehensible today.

In recent months, statues of other historical figures including Christopher Columbus and many confederate leaders have been either removed by localities or torn down by protesters.

Louis Agassiz, for whom both the peak and street are named, was a Swiss scientist in the 1800s who promoted racist myths that certain people could be ranked by development, with white Europeans at the top.

His ideas were used to defend slavery and historians have drawn links from Agassiz’s ideas to Nazi ideology and eugenics.

Even in Toas, New Mexico, where Carson is buried, there has been renewed discussion as to how Carson should be viewed.

In 2014, the Taos town council renamed the Kit Carson Memorial Park before reversing the decision the next month. Recent events have renewed interest in the discussion.

Watch Now: How Ava, The Avalanche Dog, assists in mountain safety at Snowbowl in Flagstaff

As Flagstaff’s peaks have been buried in snow, Snowbowl’s furriest ski patroller is prepared for a possible avalanche search and rescue on the…

Adriana Orman stands outside of the 102-year-old Kit Carson RV Park in Flagstaff Friday morning. Adriana has started a petition to rename the park due to Kit Carson’s particiaption in the campaigns against the Apache and Navajo peoples, inlcuding the Long Walk of the Navajo, during the American Civil War.

Adriana Orman stands outside of the 102 year old Kit Carson RV Park in Flagstaff Friday morning. Adriana has started a petition to rename the park due to Kit Carson’s particiaption in the campaigns against the Apache and Navajo peoples, inlcuding the Long Walk of the Navajo, during the American Civil War.