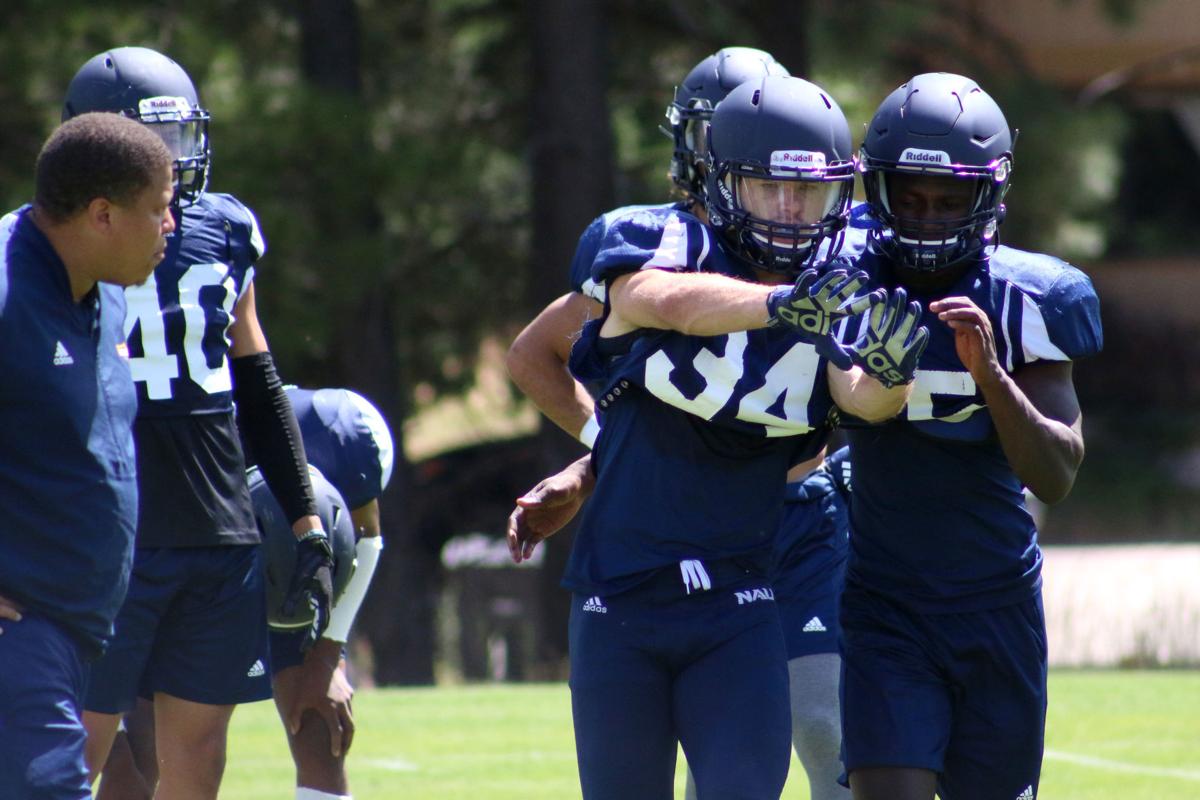 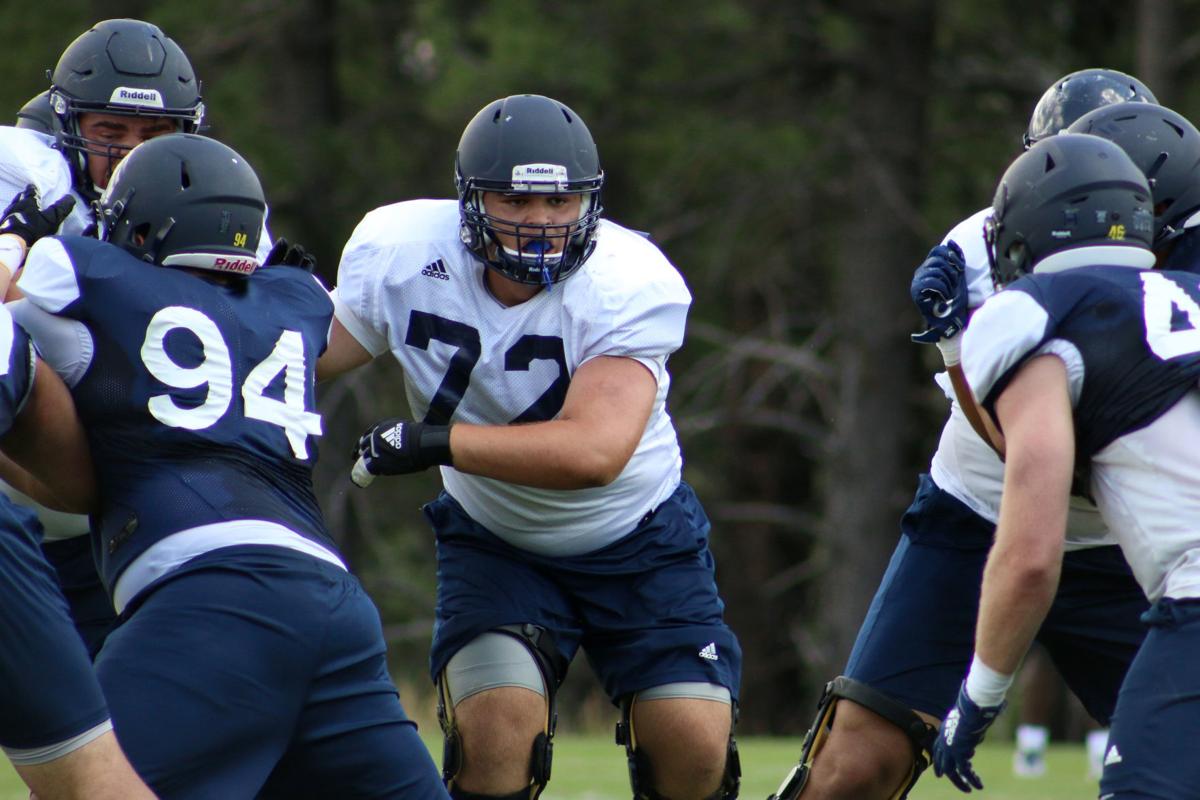 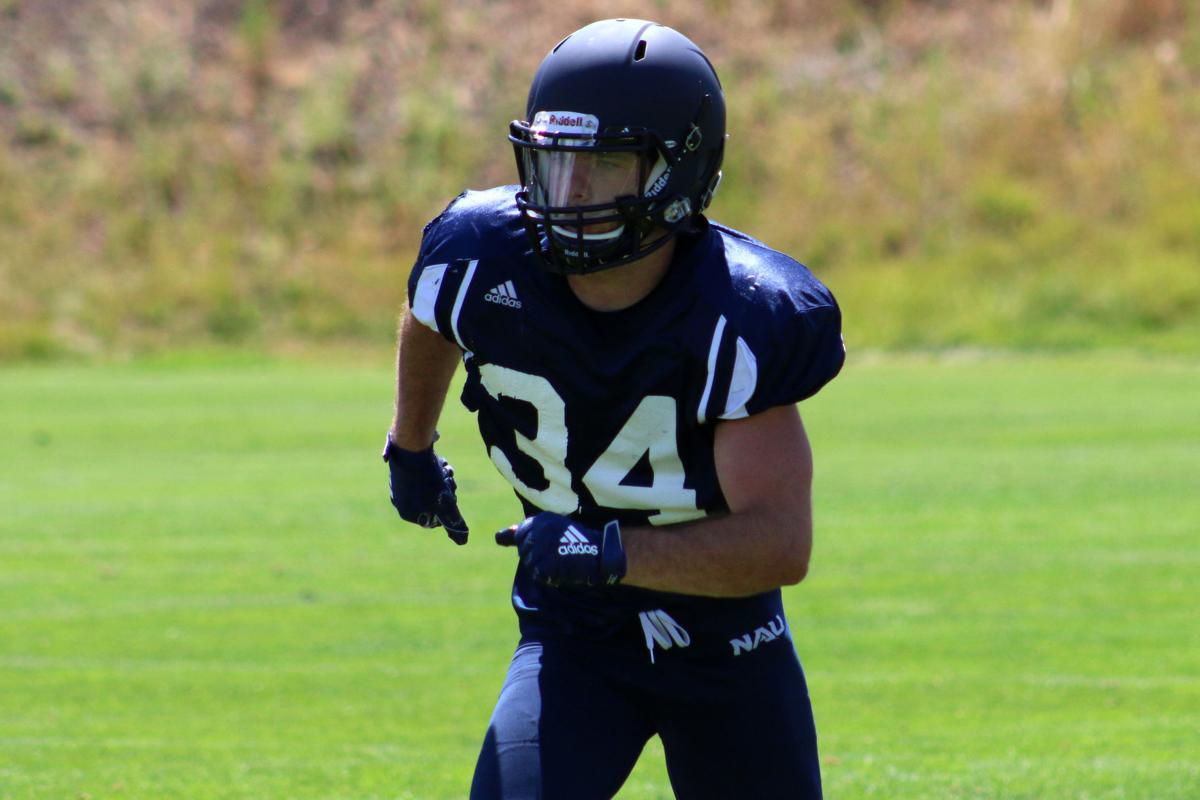 Northern Arizona defensive back Ty Furr (34) runs through drills during Saturday's practice. Furr played for the Coconino Panthers before graduating in 2019.

A rare occasion, Northern Arizona football has a trio of Grand Canyon Region products on the squad.

Former Coconino High School standout Ty Furr and Prescott High School grads Maxwell Flores and John Chaffeur -- the latter entering his redshirt freshman season -- bring a local flair to the Lumberjacks that hasn’t been seen much in the past decade.

In the past 15 years, only four players from Flagstaff-based schools have made it on the Lumberjacks football roster. From the schools around northern Arizona, the number isn’t much higher with just a handful in the same span.

Chaffeur isn’t currently with the team during fall camp and will join once the academic year gets closer to starting.

Flores and Furr had offers elsewhere but were sold by what the new coaching staff at Northern Arizona was pitching.

“When I met all these coaches, I really fell in love with the school, especially because I grew up here,” Furr said. “It’s just a great love.”

Furr was offered by NAIA squads Arizona Christian and Ottawa University in Surprise, where Furr’s high school teammate Keegan Trainor committed. He was also offered by Division II school Adams State, but eventually committed to Northern Arizona -- which had been recruiting him as an athlete.

The former Panthers star spent much of his high school career at quarterback, specifically his junior and senior seasons. He was a dual-threat QB, tossing for a career total of 1,419 yards and running for 952 in three varsity seasons.

He landed at Northern Arizona as a defensive back, a spot he played in high school but didn’t see a ton of time there his senior year.

Furr played defensive back most summers at 7-on-7 leagues hosted by Northern Arizona football, giving him the chance to show his worth on the other side of the field in front of Lumberjack coaches.

“Definitely being a QB growing up has helped me switching sides to the defensive side of the football,” Furr said. “Coming into the DB side, it’s a good brotherhood here with a lot of trust. It’s nice that I finally get to be physical on this side of the ball. Just a good change for me and I really like it so far.”

Even though Furr hasn't received much run, playing in a fairly crowded defensive backfield, he still has embraced the chance to compete in practices.

Staying in his hometown wasn’t a bad option for Furr, either, as he gets a chance to compete for a team just miles away from where he grew up.

On the other side of the ball, Flores joins an offensive line looking at numerous new faces.

That gives the young lineman from Prescott a chance to break into the mold as a needed back-up for a not-so-deep group.

Much like Furr, Flores said the message given by the Lumberjacks coaching staff set his decision to commit to the team in stone.

“It feels great to be here and in state as a part of a program that we all are trying to grow so hard,” Flores said. “ … I’d said the coaching staff who brought us in, what they are saying we really truly believe it and that’s why we came here. Whether we are first in line or fifth string. we believe in what they are saying and we will get our shot.”

Flores started for a run-heavy Prescott team his senior season, serving as a backup his junior year. Much of Prescott’s offense relied on lineman to run block quickly on quarterback runs rather than form a pocket in pass protection.

Flores has seen time playing with the No. 2 and 3 groups during live drills early in camp as he competes for a role.

The biggest adjustment for Flores -- which Furr also acknowledged -- is the change in just how much time they are putting toward the sport.

It is unlikely Furr or Flores will see any significant playing time, with the two being redshirted becoming even more likely.

Lumberjacks hoping for better fortune on offensive end this season

Northern Arizona defensive back Ty Furr (34) runs through drills during Saturday's practice. Furr played for the Coconino Panthers before graduating in 2019.