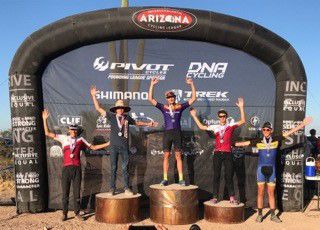 Northland Prep freshman Hayden Saltonstall celebrates at the top of the podium after winning the Arizona Interscholastic Cycling League series title in the Boys JV1 North Conference on Sunday in Waddell.

Saltonstall pedaled away from the 2019 season as champion of the Boys JV1 North Conference, and Division I Northland Prep finished the season with a total score of 18,948 for its third fifth-place finish across four seasons, bouncing back from a seventh-place team series result in 2018.

Basis Flagstaff's Remi Drogi finished his 2019 season in a two-way tie as the individual champ of the Boys Freshman North Conference, and teammate Logan Bonn came away from the season with a series silver medal in the Boys JV2 North Conference.

Flagstaff's Mackenzie Spillman was third overall in her series in the Girls Freshman league.

Northland Prep, Flagstaff and Basis Flagstaff went 7-8-9 in the season-finale event, respectively. Coconino posted a 14th-place finish in the final edition of the cycling series that consists of five races.

Northland Prep came away from Sunday's race with five top-10 finishes, with Nick Barrantes leading the way in points at 504 for the squad on his fifth-place finish in the Boys JV1 North Conference race. He clocked a 1:16:13.10 for the day.

Anja Drey finished sixth in the Girls JV2 race for Northland Prep, and teammate Alden Smith was eighth in the Boys JV1 North Conference race. Miles Mokelke and Daniel Curtis had ninth-place finishes for Northland Prep in their respective races.

Drogi won his final race of the season to secure his series title, crossing the finish line in 36:42.89 on Sunday for a team-high 500 points. Bonn and Gabriel Drogi came away with fifth-place finishes each for the season finale.

With both teams' 2019 seasons finished, Coconino and Northland Prep each saw a player land on an All-Region list.

Brooke Parker was named to the Grand Canyon Region first team for 4A Conference Coconino, which finished the regular-season schedule at 8-9 overall before losing in the play-in round to Cactus in five sets. While Parker made the first team as a setter, teammates Megan Hicks, Rikenna Curtis and Panthers libero Elyce Palmer earned second-team recognition.

Maggie Auza made the first team of the Central Region for 2A Northland Prep, which missed the postseason this year with an overall power-points mark at 6-12.

COVID-19 vaccinations are ongoing in Coconino County, with more doses and appointments expected soon to meet the high demand seen among priori…

Like you, I had seen the forecast. Like yours, my weather app showed snowflake icons starting Tuesday and lasting pretty much all week. But la…

Northland Prep freshman Hayden Saltonstall celebrates at the top of the podium after winning the Arizona Interscholastic Cycling League series title in the Boys JV1 North Conference on Sunday in Waddell.