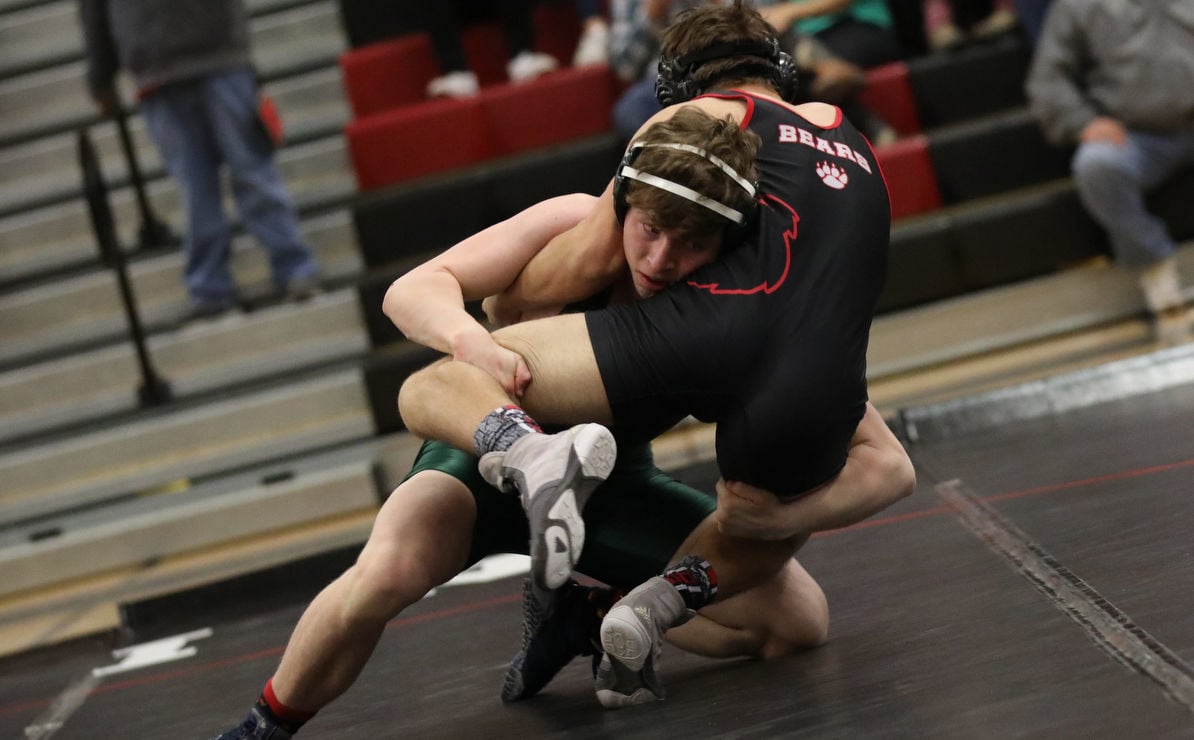 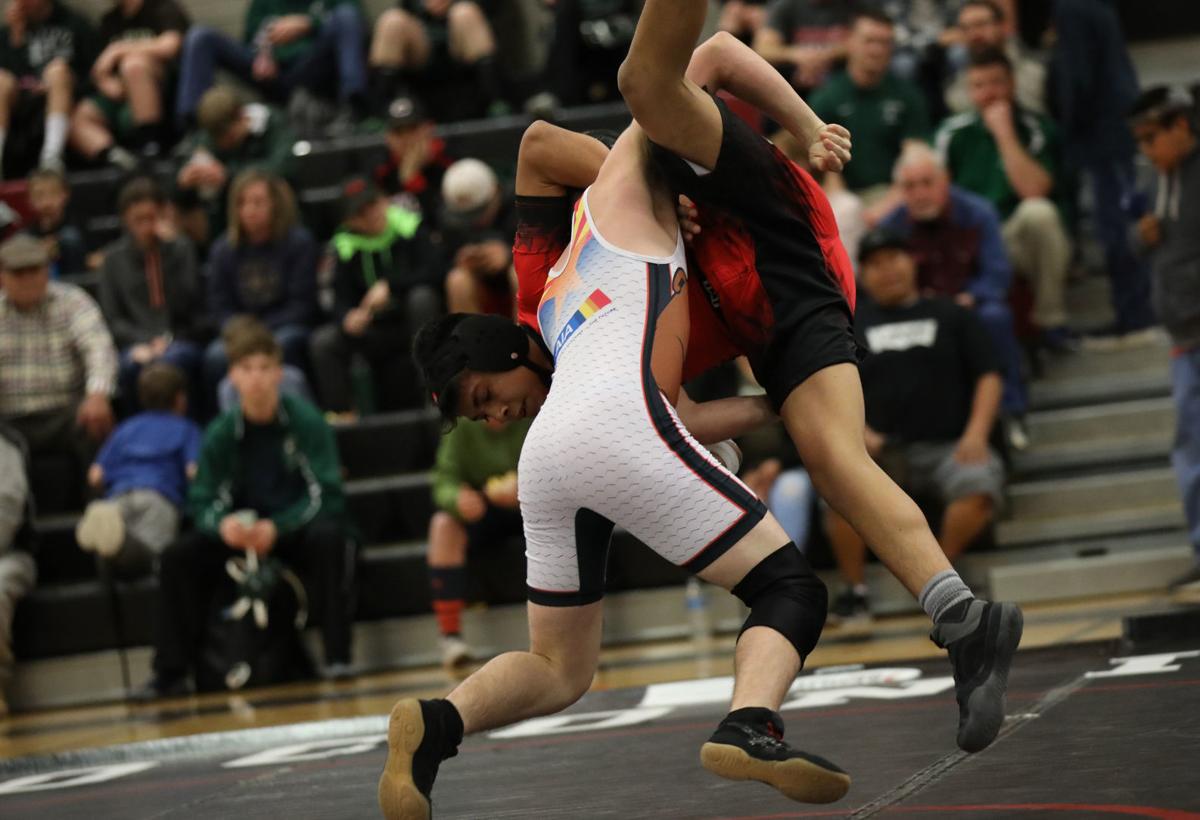 Coconino’s Payton Polder is lifted by a Bradshaw Mountain wrestler  Wednesday while competing in the 132-pound weight class at Coconino High School.

Coconino’s Payton Polder is lifted by a Bradshaw Mountain wrestler  Wednesday while competing in the 132-pound weight class at Coconino High School.

Coconino and Flagstaff's middleweights showed how a meeting of crosstown rivals can bring out the best on the mats.

Wrapping up the regular season at Coconino High School on Wednesday, the hosting Panthers finished 2-0 as a team and the Eagles went 1-1, with both programs earning victories over the Bradshaw Mountain Bears.

Wrestling at 152 pounds, Coconino's Talyn Godwin and Flagstaff's Gabriel Brown locked horns, with the former winning in overtime on a takedown nearly eight seconds into the extra minute. Godwin ended his day at 2-0, while Brown went 1-1.

Brown forced the overtime despite trailing by three points with less than a minute of regulation remaining, tallying a reversal and takedown to knot up the match 11-all. Godwin found position quickly in the extra time and drew the points to take the weight class and stop Flagstaff's run of three straight pins.

"We needed challenges like at 152, that was important," Panthers head coach Mike Schmieder said.

Schmieder praised the wrestlers on his roster who had to step up this season and fill in the blanks to make sure the Panthers didn't give up easy points due to a lack of bodies.

"A lot of these teams have forfeits, but we put a full squad out there once again, and we've been doing that week in and week out," he said.

When Flagstaff put a wrestler on the mats, the result was often a victory.

Eagles 132-pounder Andre Ryan was 2-0 on falls and Zach Collins had a perfect day as well with two pins. At 138 pounds for Flagstaff, Easten Skinner survived a scare against his Bradshaw opponent, and was replaced at the weight for the Coconino match by teammate Spencer Johnson, who also collected a pin.

"Everybody has been pushing that much harder lately, and it's the crosstown rivalry, so everyone is pushing all that much harder," Eagles head coach Scott Neuburger said. "I am happy with what I am seeing from today."

Dealing with the toll a wrestling season can put on a body, Skinner needed the extra push against the Bears. The seasoned senior faced a 12-2 deficit heading into the final period of his bout, and with less than 30 seconds remaining found a weakness in his opponent's game and took the match on a fall with :22 left on the clock.

"I think my team did really well, they showed today some of the things we practiced all week," Neuburger said.

The Eagles head coach was impressed with Ryan's day, especially with the sectional tournament coming up on Saturday.

"When he is not getting into his own head, he's a phenomenal wrestler," Neuburger said of Ryan, who put his team on the scoreboard against Flagstaff after his team gave up 18 straight points on one fall and two forfeits.

Payton Polder pinned his opponent from Bradshaw before suffering the fall to Ryan.

A freshman called up to help his team field a full lineup over the season, Coconino 106-pounder Mason Palmer finished his day with two pins. Coconino's Mauricio Quijano (170 pounds) was 2-0 with a pin against the Bears and 12-2 major decision victory over Flagstaff's Ben Evtimov. Jaden Hart (126) notched a pin against Flagstaff and was 2-0 thanks to a Bears forfeit. Noah Merrell (145) grinded out a major decision win over his Bradshaw Mountain opponent, turning a decision into the extra point thanks to a strong third period in which he turned his 7-4 lead into the 12-4 final.

"I like our grittiness, because even though we have some young guys in there, they are doing a good job and stepping up," Schmieder said.

Both Division III programs, Coconino and Flagstaff will compete at the Section Four tourney at Winslow High School, looking to send as many wrestlers possible to the state meet.

The senior stud also recorded an assist and Flagstaff (10-1, 4-1 Grand Canyon) won its third straight game. Avitia put the Eagles on the scoreboard, then found Alex Grieder for Flagstaff's second goal of the day in Cottonwood.

Grieder provided the game's final assist, helping Avitia to his final goal and second straight time finding the back of the net.

Wes Galland had Flagstaff's fourth goal of the game, as he capitalized on a corner kick from Memo Soto. Soto and Leo Thull each had one assist, with Thull's finding Sam Lytle for Flagstaff's third goal.

Mark Cardenas was in goal for the Eagles, who got great defense from Galland, Sebastian Soto Duarte, Hayden Lucas and Bryan Dean. Flagstaff's midfield was in control thanks to Soto, Emmnauel De Niz and Benett Olsen-Zwick's play.

Flagstaff, ranked No. 4 in the 4A Conference as of press time, is home to close out the regular-season schedule Friday against Coconino at 3 p.m.

Winners of the Grand Canyon Region regular-season title for the second straight season, Flagstaff rolled past Lee Williams, scoring a season-best 71 points in the rout.

The 4A Eagles, playing their sixth installment of a seven-game homestand, scored 23 points in both of the middle quarters.

The Eagles will host the Mingus Union Marauders on Friday for a 5:30 p.m. tipoff.

The Sun Sports Staff contributed to this roundup.