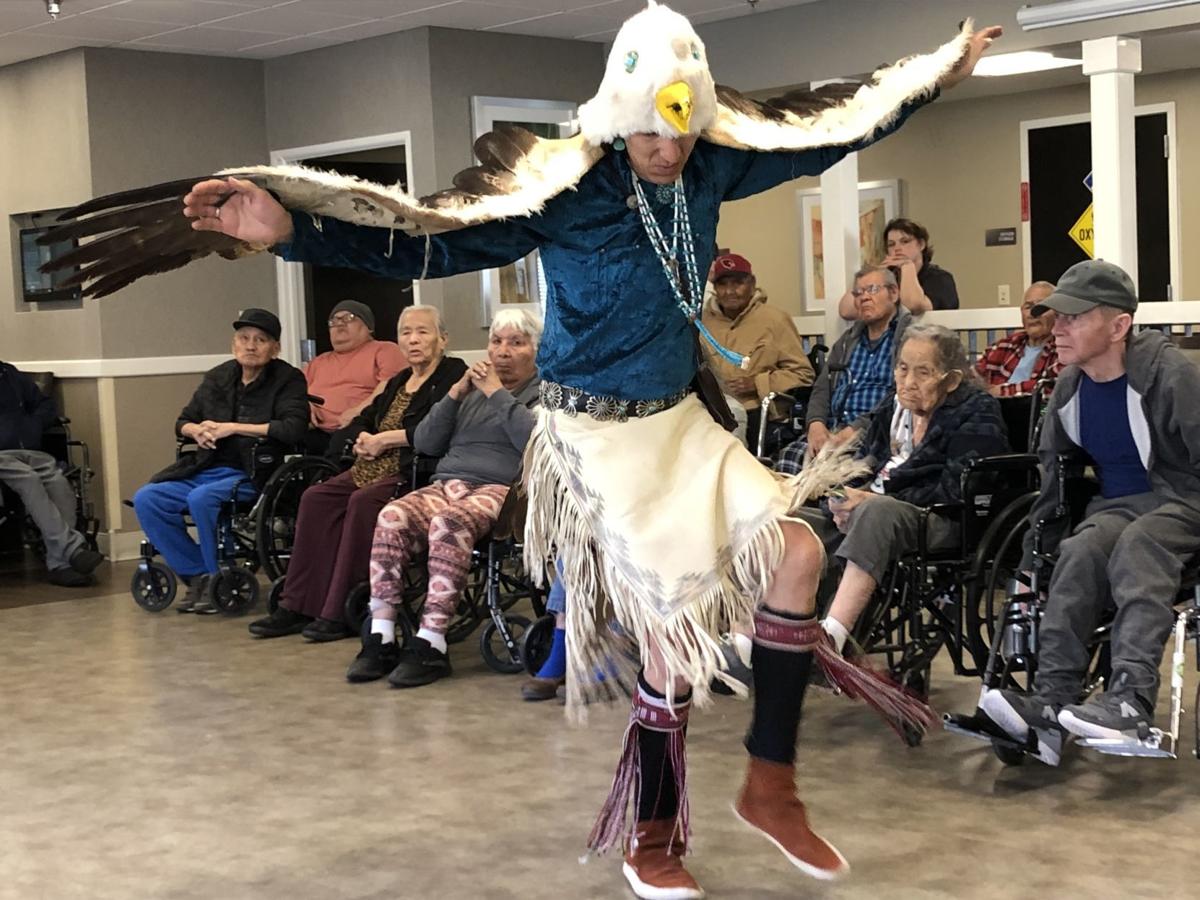 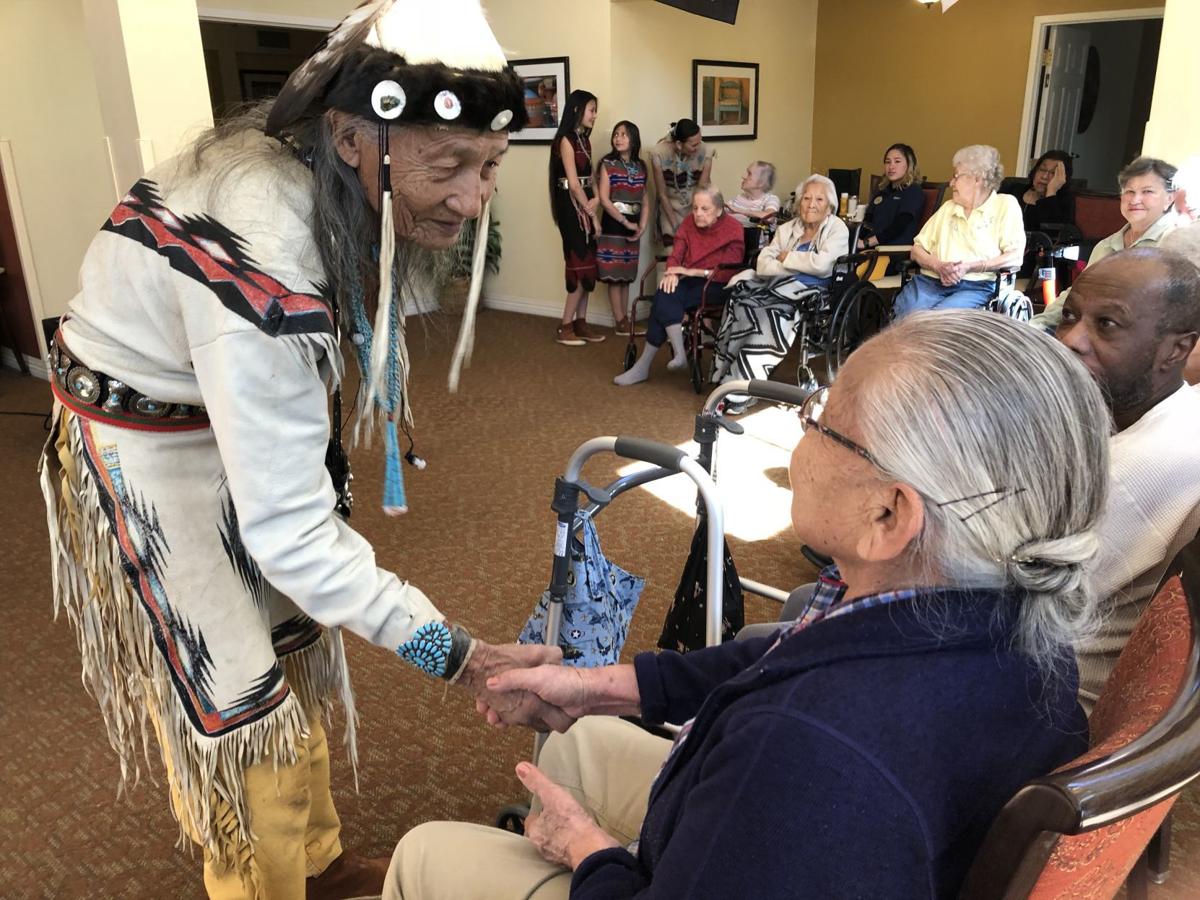 Jones Benally greets residents at Brookdale Flagstaff, an assisted-living center, after a weekend performance for the residents. 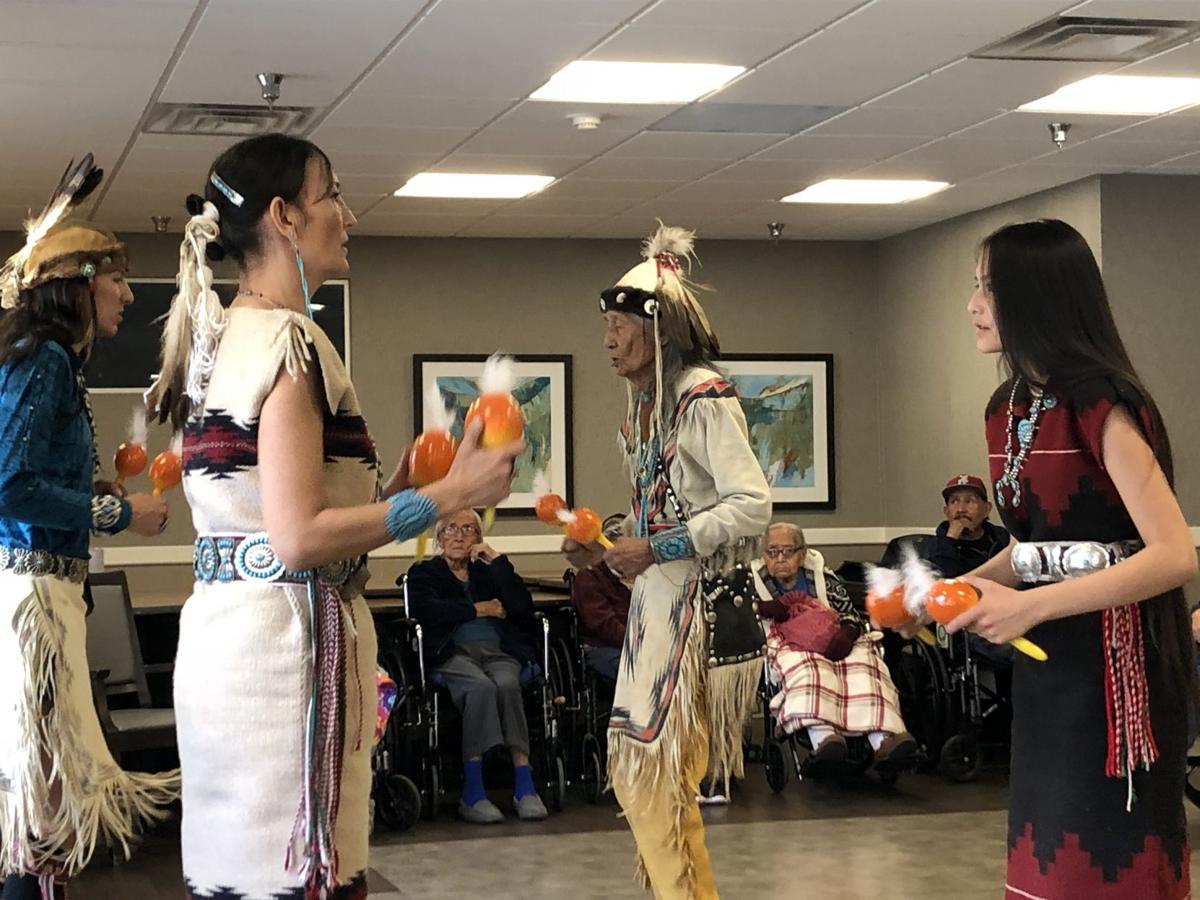 The Jones Benally Family, from left, Clayson, Jeneda, Jones and Dyatihi, perform for the residents at Haven Health in Flagstaff as part of the library's Bookmobile Performance Series. 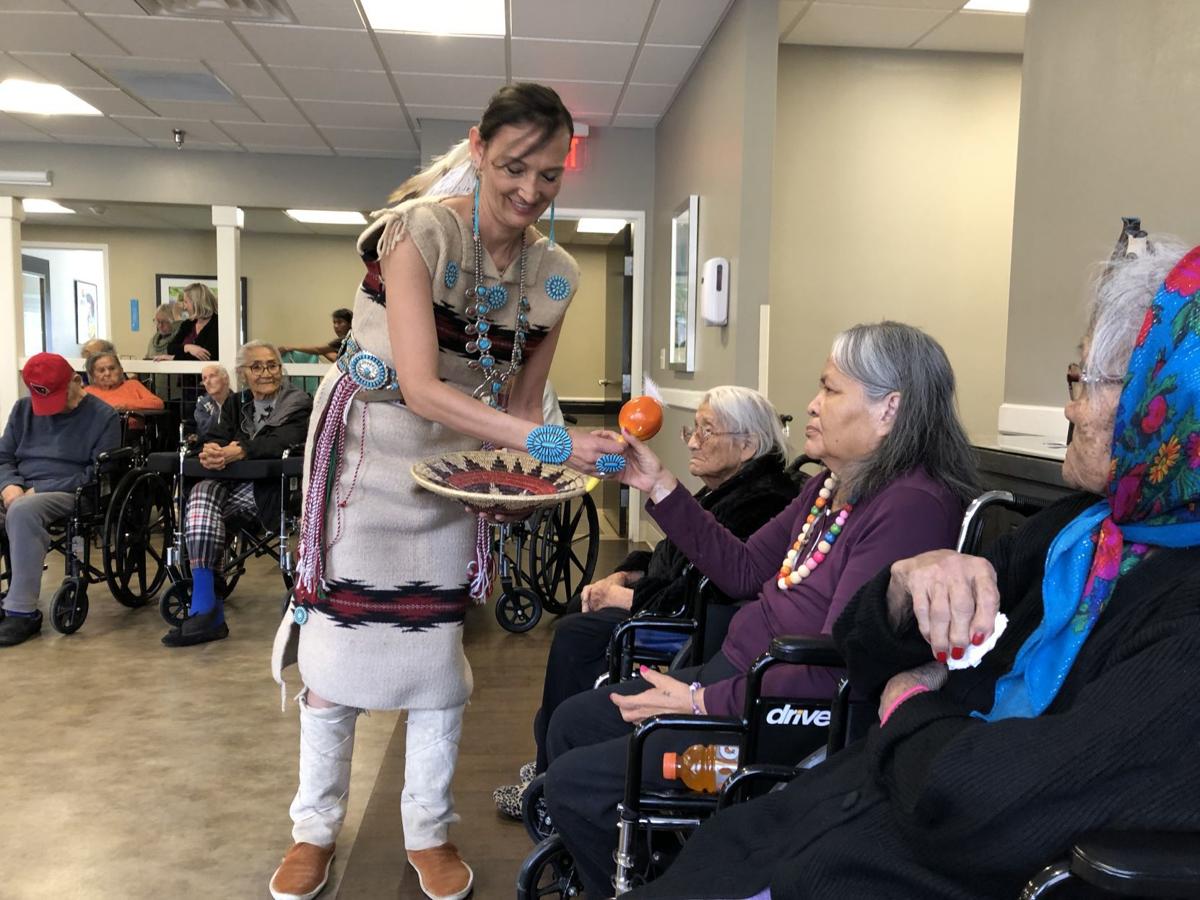 Jeneda Benally hands out rattles to residents of Haven Health Flagstaff during a performance as part of the library's Bookmobile Performance Series.

Nearing the end of a Saturday afternoon performance at Haven of Flagstaff, a senior-living center, after he and his family had finished sharing traditional Navajo dances and ceremonies but before they packed to leave, elder Jones Benally put down his drum and rattle and leaned into the microphone as if to speak.

Then, he paused. Benally scanned the semi-circle of elderly, primarily Diné, residents ringing the dining room, most in wheelchairs or clutching walkers or being supported by canes. In his 90s himself, face deeply grooved with lines of wisdom and hair considerably more gray than black, Benally felt compelled to give a summing up, a Native benediction, if you will, to his fellow seniors.

“Everybody here,” he began, slowly sweeping his right arm around the room, “each one of you, need to support one another in life and in death. None of us are getting any younger — like me. I’m the same way. You never know. Any day is a good day.”

The Jones Benally Family Dance Troupe, which has performed in venues big and small across the nation and across the continents, including hipster venues such as the South By Southwest Music Festival as well as before the Queen of England, received only a modest honorarium from the Flagstaff-Coconino County Library for appearing at two Flagstaff assisted living centers two weekends ago.

But for Jones Benally, in his role as Háátáłí — singer, dancer, healer — this gig was meaningful, a way to reach elders from all cultures who are struggling in their advanced years, to bring an afternoon of joy and entertainment to lives often lacking such cultural stimulation. As Clayson Benally, a celebrated hoop dancer, told the crowd after his father concluded, “We are here to honor and recognize you as our elders, for keeping our wisdom and sharing it with the next generation.”

In the back of the room, video camera thrust over his head, librarian and Bookmobile pilot Ron Kelley captured every moment — both for posterity and in hopes of getting more funding.

For more than eight years, Kelley has spearheaded the library’s monthly community outreach to area assisted living communities, bringing an array of entertainment to people who, due to declining health, cannot venture forth into the community to attend artistic performances.

The Bookmobile Performance Series, Kelley’s brainchild, has logged nearly 100 shows, featuring groups as diverse as belly dancers, Taiko Japanese drummers, Dixieland bands, Cowboy balladeers and Mexican-American folkloric dancers. But Kelley said the program’s budget, originally $4,800 a year, has been slashed in half in the past two years and, in current lean budget times for the library, faces possible elimination.

Kelley said he has redoubled his efforts to apply for outside grants to keep the program going even if the budget axe falls. Landing a noteworthy act such as the Jones Benally Family Dance Troupe lends a certain cachet on the program, but Kelley stressed that his motivation for publicizing what long has been a labor of love has everything to do with keeping seniors in assisted living facilities engaged with the world.

“This program serves relatively few people, in terms of the library at large,” Kelley said. “But it’s a neglected group of people, people who do not have the wherewithal to get out and about. My own experience in doing this for eight years is that a lot of people here can’t read. They’ve lost that cognitive ability. So music and dance performers — it’s perfect for them. It’s primal. For people who cannot read or even watch a movie, the library can still serve them with these performances. For brief periods of time, they can get out of the handicaps of being in such an environment.”

The program is an expansion of Kelley’s duties as a librarian, specifically his job driving the Bookmobile to far-flung areas of Coconino County to give rural residents access to books, movies and periodicals. For him, the performance series is personal.

More than a decade ago, when his mother developed Parkinson’s and later dementia, Kelley was her primary caregiver, until she reached a point she needed to go to assisted living.

“So I know well the parameters of when people are going to slide, and I care about this,” he said. “Sometimes I walk out of these places (after a performance) and I see my mom, in the sense that people with dementia have a look on their face, it’s a bewilderment look, kind of. Music can help them cope with what they are going through.”

Through grants and money allocated from the library, Kelley has been able to support local musical and dance acts and arts organizations by paying them for their performances. Too, various assisted living centers throughout the region do not have to pay to book entertainment for their residents. All they need to do is provide space for acts to do their thing.

Kim Bottorff, activities director at Haven Health, said the program is popular with residents and that she’s sent a letter to library administrators urging them to maintain funding.

“It’s nice to have people come to us rather than us going to them,” Bottorff said. “It’s a little tricky to get (our residents) out, with the number of wheelchair spots available in outside activities. These shows are amazing and highly cultural from all regions in the United States and beyond. It’s not just for us. This, really, benefits all the arts in town.”

At Brookdale, another assisted-living center, about 90% of residents fill the dining area for monthly performances, according to director Peter Dreher. “The residents here don’t have a ton of money and we don’t have a huge budget for programming, so this is big,” he said. “Plus, the residents’ family and friends are invited, so it’s really a whole community thing.”

As Jones Benally put it, “we need to support our elders. That’s what we’re here for.”

During Tuesday’s Flagstaff City Council meeting, residents, business owners and councilmembers deliberated over the need for an enforceable no…

WH: We 'don't know' if Russians are playing games

WH: We 'don't know' if Russians are playing games

Jones Benally greets residents at Brookdale Flagstaff, an assisted-living center, after a weekend performance for the residents.

The Jones Benally Family, from left, Clayson, Jeneda, Jones and Dyatihi, perform for the residents at Haven Health in Flagstaff as part of the library's Bookmobile Performance Series.

Jeneda Benally hands out rattles to residents of Haven Health Flagstaff during a performance as part of the library's Bookmobile Performance Series.