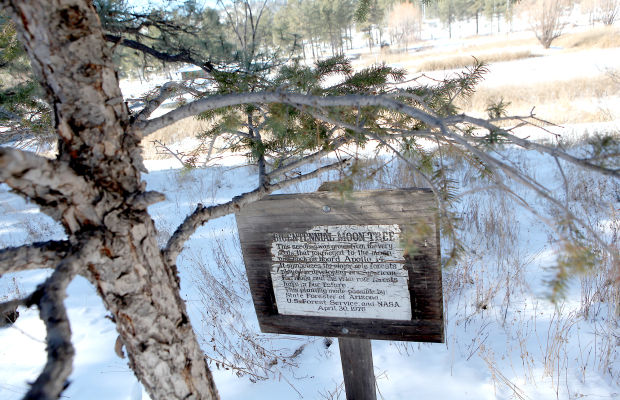 A sign stands next to the Bicentennial Moon Tree at the edge of the Frances Short Pond explaining that the tree was grown from a seed that orbited the moon on Apollo 14. (Jake Bacon/Arizona Daily Sun) 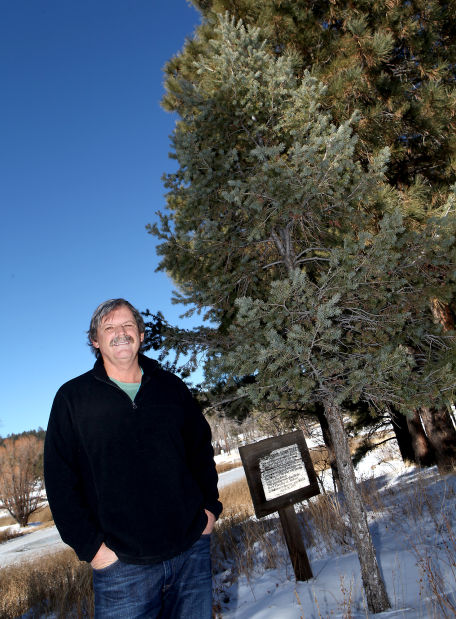 Wayne Ranney stands by the Bicentennial Moon Tree above the Frances Short Pond. The tree was said to have grown from a seed that orbited the Moon on Apollo 14. (Jake Bacon/Arizona Daily Sun)

Since 1976, it’s grown slowly alongside what was once Flagstaff Junior High School. And beneath it is a fading, wooden sign. The sign reads: “This seedling was grown from the very seeds that journeyed to the moon and back on board Apollo 14.”

Longtime Flagstaff science educator Jim David harvested those seeds from Mars Hill to be carried by Command Module Pilot Stuart Roosa. NASA ultimately took some 500 seeds on the mission, after collecting them from across the country.

“It was our idea,” says David. “They did it and brought the seeds back and (Roosa) was standing there when we put (the moon tree) in the ground. That pond changed a lot of kids’ lives. And it changed my life as well.”

The moon tree, now largely forgotten, has been a symbol of all that was accomplished at the pond. Once controversial, the pond became a centerpiece of the education received by thousands of students as they learned science, art and history in an outdoor classroom dreamed up by one man and created by many.

The tree has inspired many over the years, helping pull students toward careers in science and fascinating many casual passersby.

Susan Palm, who works at nearby Flagstaff High School, says she likes to walk by the tree, taking time to visit it sometimes on lunch breaks and occasionally bringing a friend along to see for themselves.

Flagstaff geologist Wayne Ranney says he’s also been drawn to the tree, beginning when he moved to the neighborhood in the early 1990s. Several years ago, he realized the tree was struggling through the ongoing drought and noticed as its needles started turning brown. Ranney nursed it back to health — trimming and watering it regularly, then digging out a water catchment area. He even slipped it some Miracle-Gro.

“I’m a geologist and I’ve taken a real liking to the tree because I’m just so interested that the seeds went to the moon and landed here,” Ranney says.

And yet, this moon tree never went to the moon.

In the early 1970s, the United States was caught up in the Apollo program. And thanks to the U.S. Geological Survey’s role in the missions, Flagstaff was close to the epicenter. Astronauts trained here and astronomers scouted landing sites by satellite and telescope.

The students in this mountain town were blessed with visits from astronauts like Neil Armstrong, Jim Lovell and Stuart Roosa.

Roosa developed a relationship with David’s science class at Flagstaff Junior High School. The students had been among those who visited the Apollo astronauts out at the Cinder Lake east of town while they trained for their voyage.

Their school, Flagstaff Junior High, had been built next to a pit of rocks and cinders by what is now Thorpe Park. For decades the city had used the site to dump old cinders from the roads. David, then a recent NAU graduate and middle school biology teacher, had seen schools in the Washington, D.C., area with ponds under their libraries.

He wanted to transform the rock waste site into a pond and outdoor classroom. But some on the Flagstaff City Council were not in support.

David prevailed on the project and enlisted local contractors to help with heavy machinery and clear out a pond. Silt was piled into a U-shaped island. The National Guard, still stationed near the pond, helped David rescue a homesteader’s cabin off the San Francisco Peaks. The cabin became a one-room schoolhouse where students were taught all manner of subjects.

“I took all those students and we spent about 10 years and redid that whole pond area,” he says. “We were out there everyday working with shovels.”

David says that the pond was like an anvil. He and others used the outdoor classroom to form a generation students into the backbone of this community. His graduates include more than a dozen doctors, including the likes of Flagstaff surgeon Nate Avery, who died last year.

“That pond itself was like an outdoor classroom which each discipline could make use of,” says Fannie Williams, who taught at the school for 28 years. “Each one of my students was required at some point to adopt a tree and write about it and sometimes kids adopted the moon tree.”

“They had to put a cage over it,” she says, “there had been some sort of vandalism.”

David recalls that the idea to bring seeds to the moon and back was first germinated here in Flagstaff. And he personally helped collect the Douglas fir seeds from the Lowell Observatory Scientific Preserve on Mars Hill.

And alongside Alan Shepard, Edgar Mitchell and Roosa, the Mars Hill seeds went to the moon in 1971 on board Apollo 14. NASA records verify that the seeds stayed on the command module with Roosa as he circled the moon for 33.5 hours.

Nine days after it left Earth, Apollo 14 returned and the seeds were germinated by the U.S. Forest Service. The moon seeds grew into normal saplings and were delivered back to the states in commemoration of “the major role forests played in developing our American heritage and the vital role forests have in our future.”

And in a Flagstaff ceremony with much fanfare on April 30, 1976, the Douglas fir moon tree was planted overlooking Frances Short Pond. Roosa, who had started his career as a smokejumper with the U.S. Forest Service,  attended the planting.

“About three days after we planted that (tree), somebody pulled it up and I went out there one morning and it was lying on the ground,” David says.

David and scientist Jim Alam, now retired from the U.S. Soil Conservation Service, tried desperately to save the tree. They brought it to a research station and it died not long later.

He says that he never told anyone of the switch out of fear it would destroy the pond project.

“That tree grew and people loved it and it made a huge difference in people’s lives,” David says. “I don’t ever tell lies. Nobody’s ever asked me about it. It changed a thousand lives and as far as they’re concerned, that tree went to the moon.”

Frances Short Pond is no longer used regularly as a classroom and the homestead turned pondside schoolhouse is now a place for transients to drink. But the pond project and legacy left by Palm and David still carries on in the Willow Bend Environmental Center, now housed off Sawmill Road. The center still abides by the original ethic of incorporating an environmental education into all disciplines.

In a city full of Apollo-era history, the moon tree’s legacy is unknown to many. A long list of scientists, historians and educators contacted by the Daily Sun had no knowledge of the tree.

Heather Archuletta, a blogger, has traveled across the country visiting as many moon trees as she could and writing about the trips at www.pillownaut.com. She says she’s brought tourists to the Flagstaff moon tree several times and they’re always fascinated.

Many of the moon trees she says are still alive, but few still have their signs. On the campus of Humboldt State University in Arcata, Calif., it’s been forgotten exactly which trees went to the moon.

“Yours is one of the very few with its original sign,” Archuletta says. “(It) blows my mind how many have been stolen over the years. I have to admit, though, I was a bit taken aback that the Flagstaff tree was still so small. It has not fared as well as some of the other Douglas firs. Some think it might be the elevation, but I don’t know if that’s the whole story. ... We may never really know, from seed to seed, but lots of folks are planting second generation trees in all different climates with pretty good luck.”

Ranney, long the moon tree’s unofficial caretaker after the middle school moved out, says he’s undeterred that this moon tree never went to the moon. He was unaware of the pond project and thinks its legacy is made the richer by the story.

“This tree that currently exists is growing in the same place and the same soil where the moon tree was growing, so there is some connection,” Ranney says. “I will still take an interest in the tree for what it represents.”

A sign stands next to the Bicentennial Moon Tree at the edge of the Frances Short Pond explaining that the tree was grown from a seed that orbited the moon on Apollo 14. (Jake Bacon/Arizona Daily Sun)

Wayne Ranney stands by the Bicentennial Moon Tree above the Frances Short Pond. The tree was said to have grown from a seed that orbited the Moon on Apollo 14. (Jake Bacon/Arizona Daily Sun)