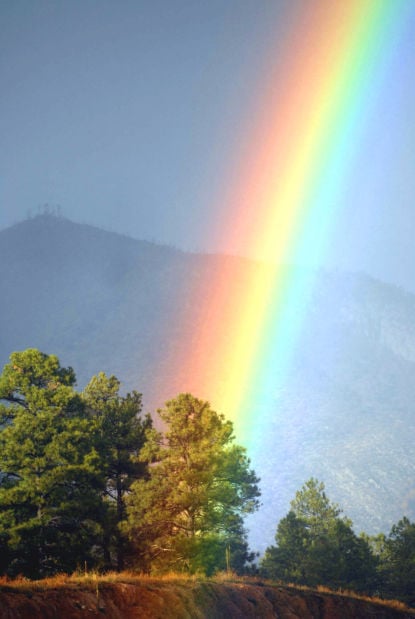 A rainbow shines in front of Mount Elden in the rainstorms in this file photo. (Josh Biggs/Arizona Daily Sun) 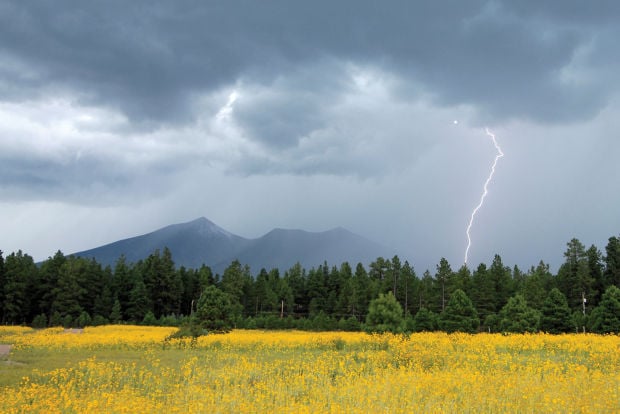 Monsoon storms develop over the Peaks in Flagstaff in this file photo. (Dana Felthauser/Arizona Daily Sun)

Last summer brought an anomaly. It became the second-wettest Monsoon ever recorded in Flagstaff. The officially tally was 12.42 inches—a remarkable amount of precipitation for a town that receives around 22 inches of rain a year. It brought lush forests, verdant gardens and pulsing streams. It was a glorious bounty of moisture in a region that sees little of it—from the sky or the ground.

In fact, the original Spanish name for the San Francisco Peaks was “Sierra Sin Agua,” mountain without water. Archaeologist Harold S. Colton took that name and applied it to early Native American people he called Sinagua. It’s in a place like this that a seasonal shift that leads to torrential rains becomes something to celebrate.

Every year, the summer brings raging thunderstorms as a result of the seasonal Arizona Monsoon. Because of it, we have the largest ponderosa pine forest in the world that runs through the center of the state. And because of it—thankfully after this year’s season, the window for catastrophic wildfire is limited. And, we also get the wildflowers. In short, it is a season that is a cause for excitement.

The Monsoon season has been designated from mid-June to the end of September. This came after more complicated metric regarding relative humidity reaching a certain percentage for a certain number of days. That hard-to-follow determination—at least for the average person—led to a shift in selecting calendar dates. However, the average start for Monsoon in Flagstaff usually occurs in early to mid-July. The greatest intensity of the storms tends to hit from mid-July to mid-August.

The storms generally crank up in the afternoon. As the pummeling rains soak the forests, a number of Monsoon-adapted flowers begin to emerge. There is the dayflower, Torrey’s craglily and sunflowers that go crazy along the meadows beneath the San Francisco Peaks. Along with the beauty along the ground, the skies bring eye-popping drama. There is lightning both day and night, billowing clouds catching sunset light, curtains of virga and—of course—rainbows.

The Monsoon also take the edge off the temperatures. When Monsoon really gets churning in August, the average high temperature is 78 degrees. It becomes a notable shift when the mechanisms click and the clouds begin to billow. And for many longtime Flagstaff residents, it is a special kind of annual holiday.

Flagstaff City Council will be deciding whether to pass a resolution declaring an affordable housing crisis Tuesday.

SUNDAY FEATURE: For this Flagstaff retiree, the Buck stops wherever fires pop up

Back home in Flagstaff, retirement resumed, Buck Wickham looks none the worse for wear. Another fire season will come, soon enough, and he will sure as heck be there once more in the midst of the action. But for now, Buck in winter is content to dust off his golf clubs, scratch his beloved Aussie Shepherd, Bessie, behind the ears, trade his cowboy boots for hiking boots or, really, just chill and reflect on another hot, dry summer on the front lines now safely in the books.

Shadow Mountain Village to open in Bellemont in early 2021

Shadow Mountain Village, a 94-unit townhome community in Bellemont, is nearing completion, with its first residents set to arrive this spring.

New survey suggests some Flagstaff residents are confused about evacuation systems, based on Museum Fire

A new survey in Flagstaff has shown that while people are confident they understand the county’s emergency evacuation system, they might be a …

A local legal aid program has been trying to help people and families stay in their homes for as long as they can during the pandemic, ahead o…

Coconino County has broken its record for COVID-19 testing, with more than 7,000 tests administered in a single week as residents prepared for…

A rainbow shines in front of Mount Elden in the rainstorms in this file photo. (Josh Biggs/Arizona Daily Sun)

Monsoon storms develop over the Peaks in Flagstaff in this file photo. (Dana Felthauser/Arizona Daily Sun)