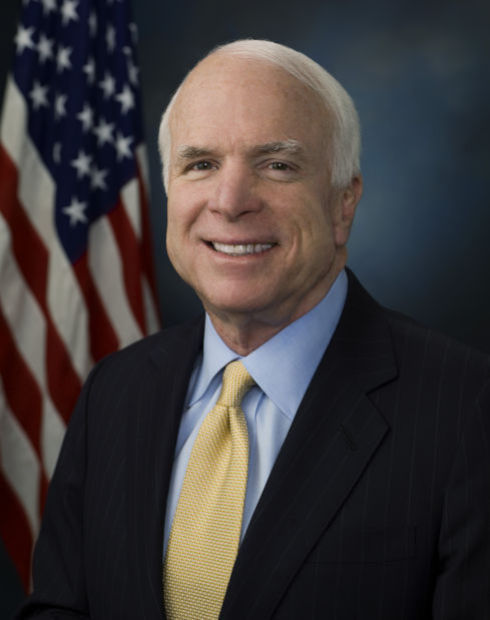 U. S. Sen. John McCain is in one of the toughest political races of his career.

Arizona’s senior senator, seeking his sixth term, finds himself in a convergence of political trouble. He’s facing a well-known Democratic Congresswoman Ann Kirkpatrick, a controversial Republican presidential candidate has shown disdain for McCain, and Tea Party Republicans here in the state are undermining him politically.

The race was once considered to be a toss-up, but recent polls offer conflicting narratives on how close the race truly is.

A recent NBC/Marist poll has the 2008 presidential candidate beating Kirkpatrick by 19 points. An older poll released last month from Public Policy Polling had McCain and Kirkpatrick in a statistical dead heat.

The race has attracted a lot of attention from outside groups, which have poured more than $5.9 million into the race, according to The Sunlight Foundation, a nonpartisan group that advocates for transparency and public access to government data. About $2.7 million was been spent in the Republican primary on ads attacking McCain’s rival, former state Senator Kelli Ward.

Additionally, both McCain and Kirkpatrick have individually raised millions of dollars and have begun spending money on television ads.

Standing in the lobby of the La Estrella Bakery in Tucson before a tour of the business recently, Kirkpatrick told the owner about the tiny store her father owned in the town of Whiteriver. Her family has deep ties to northern Arizona -- her dad’s family were merchants in the White Mountains while her mother’s family had a ranch in Snowflake.

Before being elected to Congress in 2008, Kirkpatrick represented Flagstaff and the Navajo Nation as a state representative. Before that she worked as an attorney. In 1980, she was Coconino County’s deputy county attorney.

The 66-year-old Congresswoman helped briefly make — and eat — tortillas. She spoke to locals who lined up to buy empanadas and other pastries as well as fresh tortillas. Many customers didn’t seem to know who Kirkpatrick was nor that she was running against McCain .

Kirkpatrick has been criticized for her support for the Affordable Care Act, but the Flagstaff Democrat isn’t backing away from the issue.

She believes that some of the problems, including difficulty finding companies willing to provide health insurance in rural areas, have become political. For example, AETNA’s decision to leave the ACA marketplace briefly left Pinal County residents without an option to buy subsidized health insurance.

She contends AETNA officials left the marketplace because they wanted to hold federal officials hostage.

“AETNA’s situation is vindictive. They are getting revenge on the Department of Justice who wouldn’t approve their merger with Humana,” she said. “They are hurting real families who depend on their medical care.”

But she concedes that the Affordable Care Act still needs work.

“Even from the very beginning, I’ve said, ‘We’d need a revision,’” Kirkpatrick said.

The top priorities for Kirkpatrick are building a world-class educational system and comprehensive immigration reform.

For Southern Arizona, the lack of immigration reform is hurting the economy. And the proposal of a larger border wall is bad from local businesses, she says.

“Arizona last year did $31 billion dollars worth of business with Mexico,” she said, standing in the back of the bakery, motioning to the customers. “People tell me that Trump’s idea of deporting 12 million people, that is personal to them.”

McCain is well-known but is fighting battles on many fronts

On a recent trip to his midtown Tucson election headquarters, the 80-year-old McCain rattles off percentages, figures and statistics as he discusses hot-button topics.

For example, McCain notes a Gallup poll found 29 percent of Americans report that the Affordable Care Act has hurt them financially. And a majority of them oppose what he calls “Obamacare.”

“My opponent said it was one of her more important votes,” McCain says.

The shortage of health insurance providers in the ACA marketplace in Pinal County is one of the many examples McCain cites as the broken promises of the federal healthcare initiative.

“I know that when we are down to one that this is a complete contradiction to the promises that were made,” McCain says.

Beyond polls in the news, McCain says he is has heard numerous “horror stories” from supporters.

Jobs are also a top concern for McCain, although he believes the Obama administration has largely avoided Congress by passing mandates through executive action or by setting new regulations with federal agencies.

The Navajo coal generation plant, for example, is threatened by new standards set by the Environmental Protection Agency for greenhouse gases and plans to throttle back production.

“It is going to have a devastating effect on Northern Arizona,” McCain notes.

He offers himself as a check on presidential power, noting President Barack Obama said two years ago he would use his office to enact legislation.

If Democratic presidential nominee Hillary Clinton were elected, McCain predicts she will push for more regulations that will hinder businesses.

“If you talk to any small businessperson in Pima County they will tell you that government regulations are choking them. That and taxes,” McCain said.

McCain also said Congress needs to address illegal immigration, noting his role as one of the Gang of Eight whose plan cleared the Senate, but not the House.

Most importantly, the plan would have provided a legal pathway for undocumented immigrants.

“There are 11 million people living here illegally,” he said. “That is an unsustainable situation.”

McCain still supports the plan but says it will require a lot of work for each person before they can become a citizen.