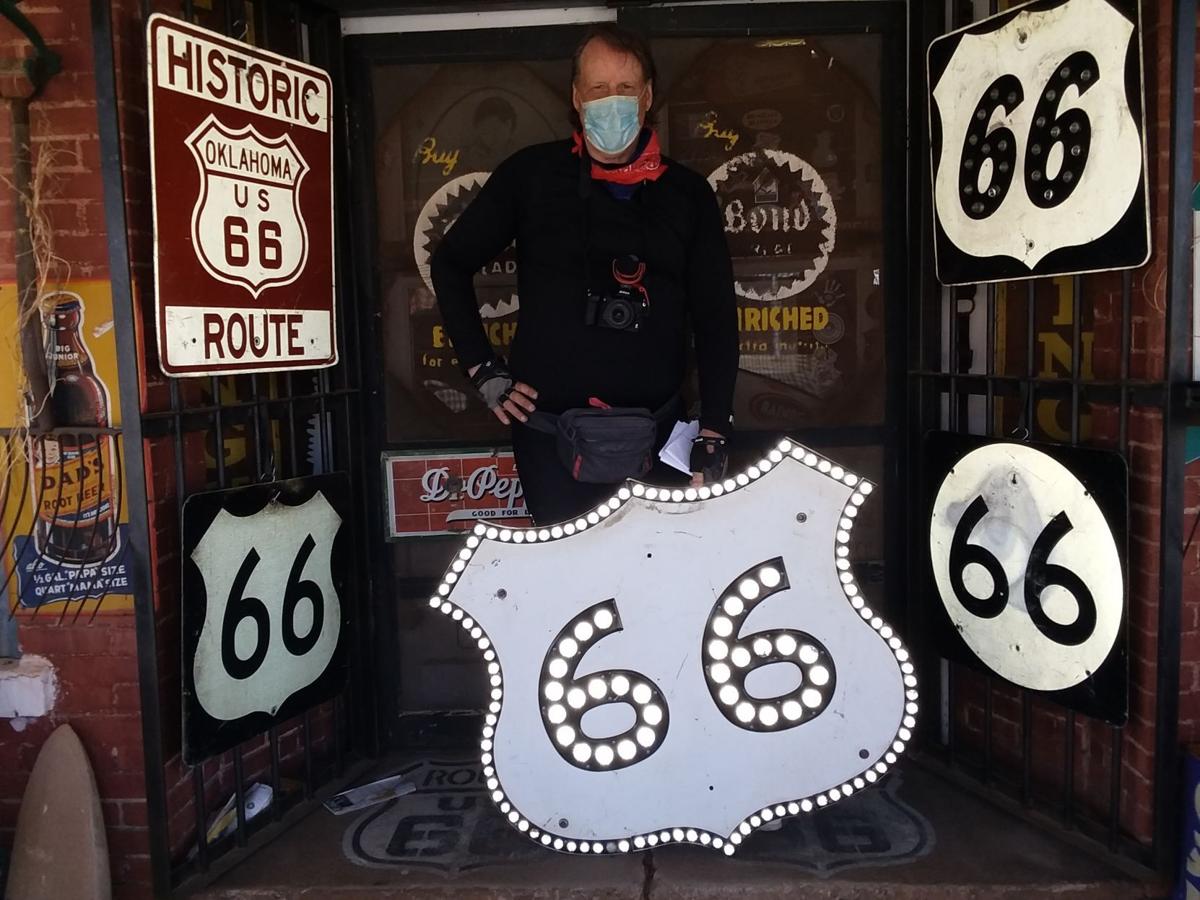 Journalist Michael Sean Comerford is cycling the length of Route 66 to document how average Americans are dealing with the COVID-19 pandemic. Here he is at a stop in Erick, Oklahoma. 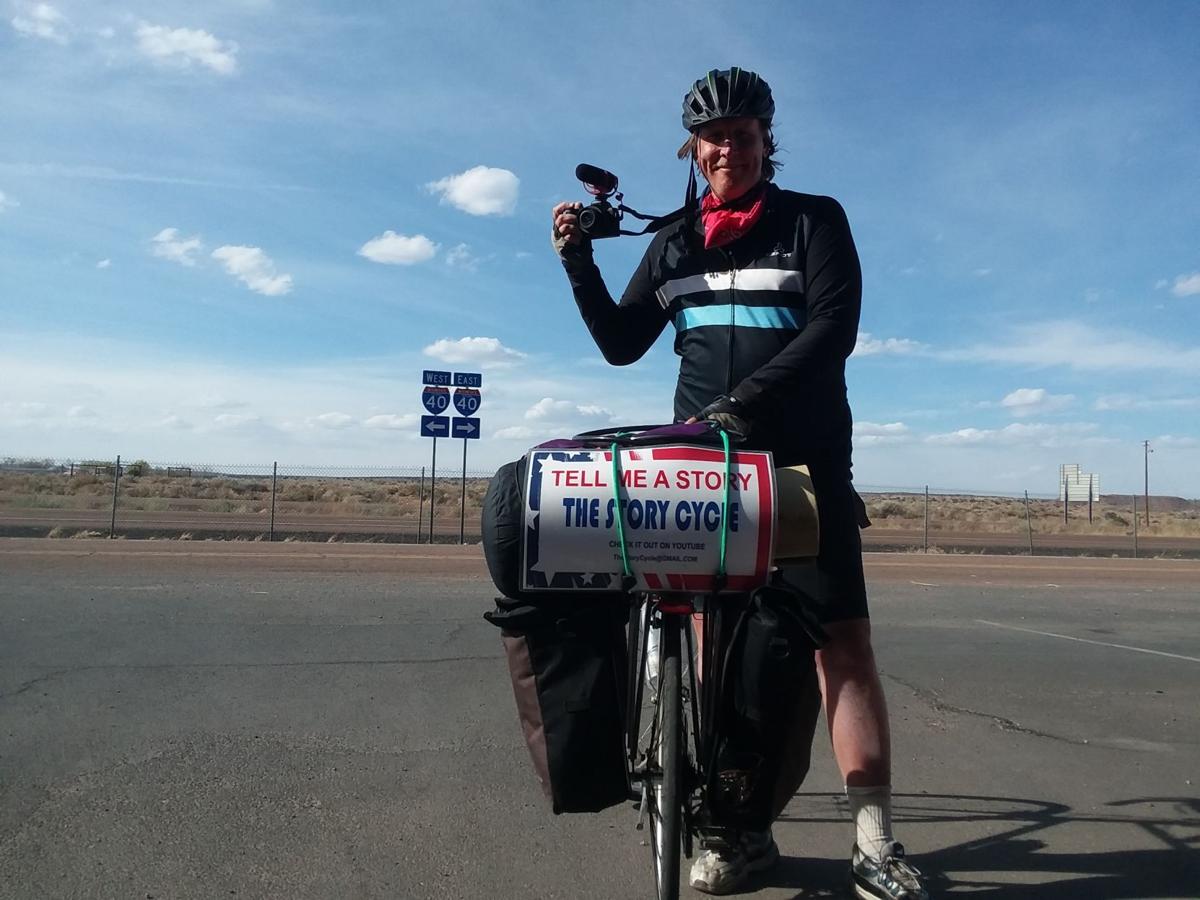 Journalist Michael Sean Comerford, traveling the length of Route 66 to collect COVID-19 stories, stops to rest in Chambers, Arizona. He is expected to stop in Flagstaff on Friday. 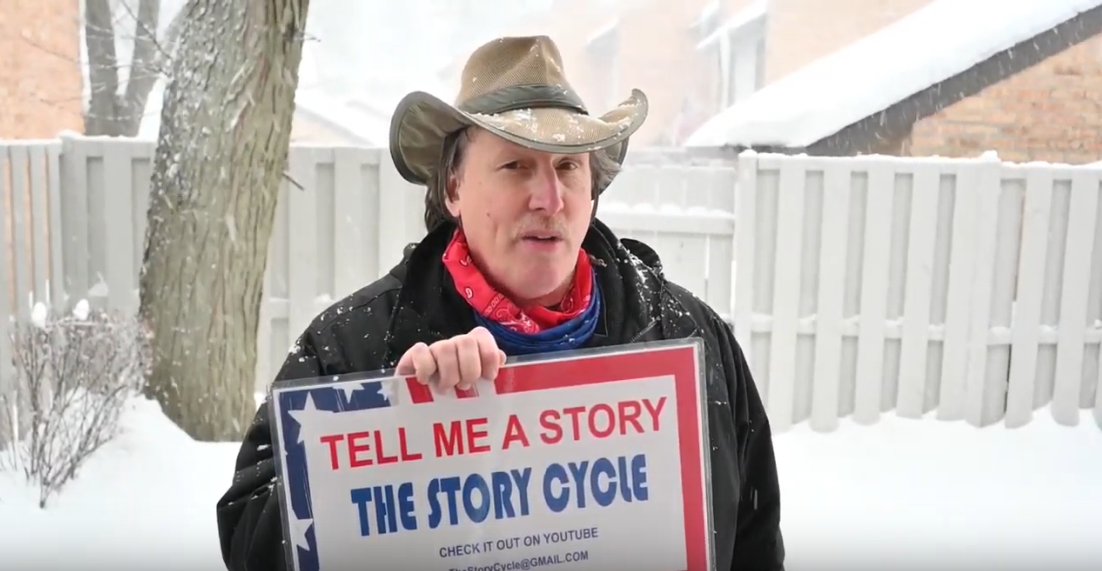 Journalist Michael Sean Comerford is riding his bike the length of Route 66, interviewing everyday Americans for his project, "The Story Cycle: Americans in a Pandemic." He began is journey in February in the snow from Chicago. 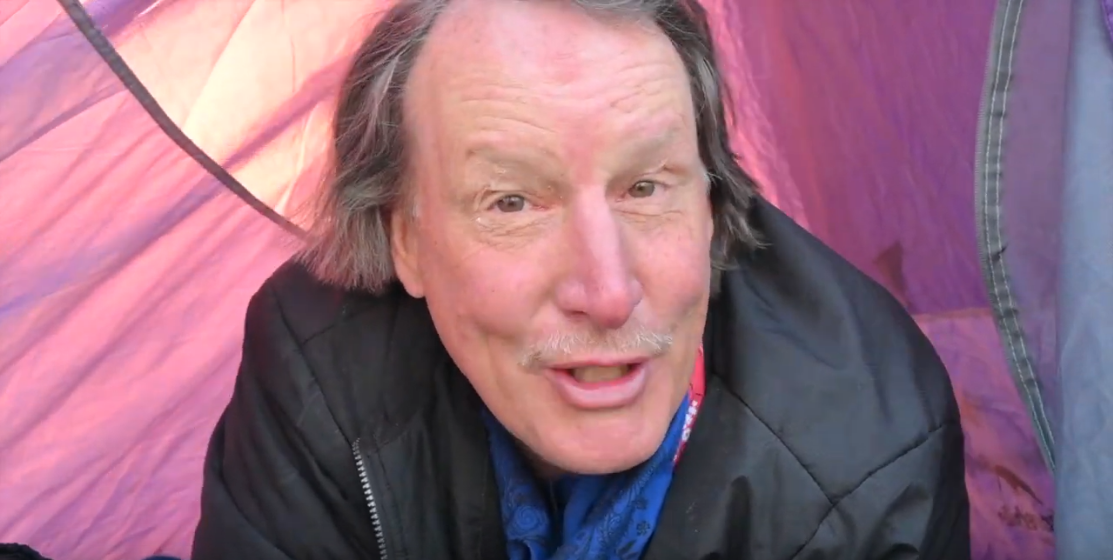 Journalist Michael Sean Comerford records one of his videos for his project, "The Story Cycle: Americans in a Pandemic" while huddled in a tent in New Mexico along Route 66. 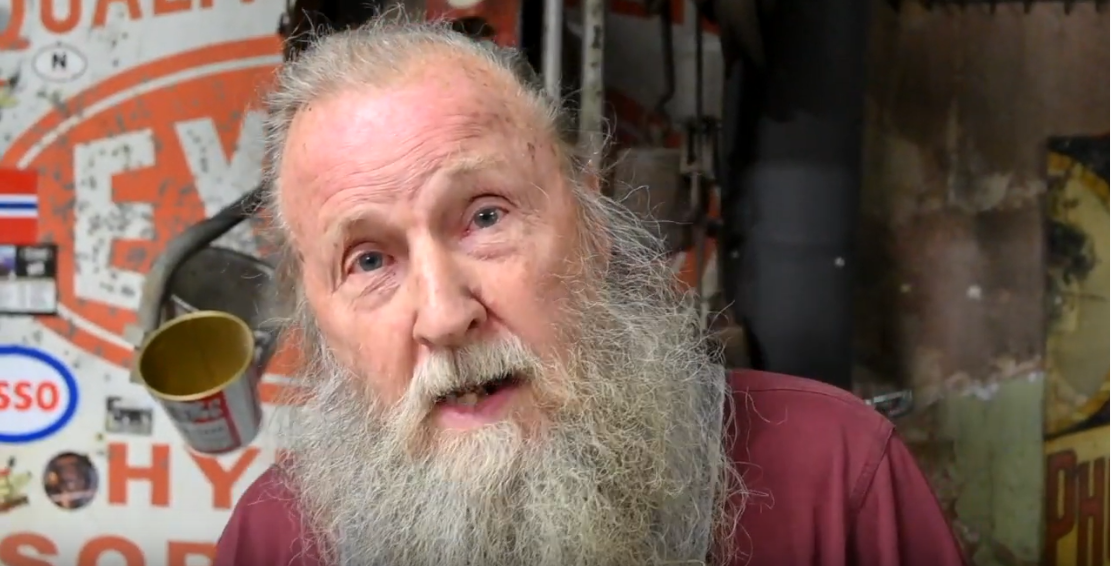 Among the "average" Americans journalist Michael Sean Comerford has interviewed along Route 66 for his "The Story Cycle" project was shop owner Harley Russell, of Erick, Oklahoma, a COVID denier who railed against Dr. Anthony Fauci, among others.

Tuesday morning, and Michael Sean Comerford, astride his 40-year-old bicycle, was just about the cross the threshold from New Mexico into Arizona, the town of Lupton and Speedy’s Truck Stop shimmering up ahead.

Who knows what fascinating stories would be awaiting Comerford in that thriving metropolis, pop. 19?

But before he could roll into town, his cell phone rang. Comerford pulled off to the soft shoulder of Route 66. A reporter from Flagstaff was calling, wanting to hear the veteran journalist and author’s own story of his months-long project, “The Story Cycle: Americans in a Pandemic,” in which he’s traveling by bike to ask people to share their tales of life during COVID.

It has been, in a word, eventful, Comerford said.

Part Studs Terkel’s “Working,” part Steinbeck’s “Travels with Charley,” and part Hunter S. Thompson Gonzo reportage, Comerford, 62, has encountered all manner of Americans with widely divergent stories and opinions, from COVID deniers to those dealing with severe illness to just common folks trying to cope in this most uncommon of times.

Comerford, based in Chicago, is expected to hit Flagstaff today to collect more stories before hopping back on his rickety bike and heading to Route 66’s termination point in Santa Monica, California.

Already, he’s conducted some 80 interviews, which his project’s sponsor, the University of Florida’s Samuel Proctor Oral History Program, posts on YouTube. A book will be forthcoming, Comerford said, after he concludes the trip and is able to reflect and find “threads” that unite such disparate stories he’s absorbed on the road.

“It has been so much more than I’d thought,” Comerford said. “People are astonishingly articulate about their lives and experiences, and compelling, and sometimes heartbreaking, and sometimes hilarious. I’m filming it and not filtering it.

“I’ve heard people talk of brainwashing. I’ve heard people wondering if they’re tracking us (with the vaccine). Several religious people thinking COVID was trying to control the American people. These are educated people I’ve talked to thinking that this is a way to weed out older people. The skepticism is out there."

But he’s also listened to harrowing tales of people dealing with COVID’s health effects, including one man in Bud’s Bait Shop in Carthage, Missouri, who lifted up his shirt to show heart monitors on his chest after a near-death COVID experience.

Comerford, of course, has his own beliefs, like any person, but has told everyone he’s encountered, including this reporter, that he wants to hear their stories, not share his own opinions. (But he did confirm that he has been vaccinated and that he takes precautions — masking, distancing — for safety’s sake.)

Being non-judgmental and simply taking the pulse of Middle America — and Route 66, he said, is the country’s “Main Street” — is a way for Comerford to illustrate the often gaping political and cultural divide that has taken hold around the pandemic and the politicization of everything from mask wearing to vaccine compliance.

“There’s a lot of folk wisdom floating around America,” he said, charitably.

One of Comerford’s most memorable interviews was with an Oklahoma rancher who contracted a pretty severe case of COVID but found what he said was a novel way of recovering that definitely is not recommended by the Centers for Disease Control and Prevention.

“The guy,” Comerford explains, “says to me, ‘Well, I got COVID. I joked about it but then I got it and thought I was going to die. But the guy who slaughters my cattle told me that he knows of a de-wormer for cattle that you can take to get better. So I walked right out to my barn and took 20cc and drank a vial of it.’”

Comerford stopped to laugh, then continued with the rancher’s story: “He said he felt better the next day, but worse the day after. But the guy who slaughters the cattle told him he had to take the de-wormer for three days. So he took it another two days, and (the COVID symptoms) were gone. He went to his veterinarian, who told him he’d heard the same (cure) from other ranchers and gave him another vial.”

Not only did the folk remedy purportedly work, the rancher told Comerford, but “the guy looked in the toilet bowl, and he’d de-wormed himself, too.”

Not all the stories are so colorful. Some paint a dark portrait of conspiracy theories and COVID-denial and perpetuation of “alternative facts” that are hard to fathom with the reams of solid scientific evidence available.

There was a woman who works in a gas station in a one-stop town in New Mexico — living in a trailer in the back — who flatly denied the existence of COVID and refuses to wear a mask or get vaccinated or even believe that nearly 600,000 Americans have died of the virus. And there was Harley Russell, a souvenir shop owner in Erick, Oklahoma, who gave a profane rant against Dr. Anthony Fauci and the government, dismissing COVID concerns by saying, “I didn’t even catch V.D. Whattya think of those numbers? Lord almighty!”

Comerford lets people express themselves for a full five minutes, without presenting any scientific rebuttal. The journalist said it’s not his place to add context during the interviews; it’s just to document the way people think.

“I cannot tell you how many people, before I start my interview, especially from Missouri through Oklahoma and Texas, have said, ‘Do you know Jesus?’" he said. "I say, ‘I’ve been to a lot of countries, and I don’t talk religion or politics. I’m not here for my opinion; I’m here for yours.’

“So here's the way some people are adjusting. Religion: God is protecting me. Or fatalism: the hair on my head is counted and the days of my life are counted, and when my time has come, that is what’s written. They don’t seem so crazy when you’re talking to them. If you’re in a town of 12 people, and you mention the 560,000 dead, they can’t put their heads around it. They think it’s overblown because they’re in a 12-person town with plains all around them just off the mesas. It’s not what they see with their own eyes.”

Comerford has seen a lot, as he anticipated. He said he came up with the idea after meeting with renown author Paul Salopek, currently embarked on an “Out of Eden” walk for National Geographic, in which he is retracing global migration on foot for 21,000 miles.

“We talked about slow journalism and how it will turn up stories you would not get if you were not taking your time,” Comerford said.

On the back of Comerford’s bicycle is a simple sign, stating, “Tell Me a Story.”

It gets a big response, he said, some having nothing to do with COVID.

“I park the bike," he said, "and people will come up and say you want a story? There was a guy in Missouri who told me, ‘I could tell you some stories, where the bodies are buried here and who’s sleeping with who in town.’ I said, ‘I’m sure those are great stories, but I want to hear about COVID.’

“You know, 10 years from now, we’ll go, ‘Remember when?’ Well, we’ll have it in the archives, on film and have a book about it in people’s own words.”

To learn more about journalist Michael Sean Comerford's trip across Route 66 for the "The Story Cycle: Americans in a Pandemic," go to www.michaelseancomerford.com. Many of his interviews can be found on YouTube: www.youtube.com/channel/UCAoCTKRdaIVX3B3nV0X2MrQ.

The moon's phases may be affecting mankind's sleep

With greenhouse emissions on the rise, Flagstaff works to implement Carbon Neutrality Plan

As a report indicated increased greenhouse emissions in the community, local leaders were presented at this week’s Flagstaff City Council meet…

Journalist Michael Sean Comerford is cycling the length of Route 66 to document how average Americans are dealing with the COVID-19 pandemic. Here he is at a stop in Erick, Oklahoma.

Journalist Michael Sean Comerford, traveling the length of Route 66 to collect COVID-19 stories, stops to rest in Chambers, Arizona. He is expected to stop in Flagstaff on Friday.

Journalist Michael Sean Comerford is riding his bike the length of Route 66, interviewing everyday Americans for his project, "The Story Cycle: Americans in a Pandemic." He began is journey in February in the snow from Chicago.

Journalist Michael Sean Comerford records one of his videos for his project, "The Story Cycle: Americans in a Pandemic" while huddled in a tent in New Mexico along Route 66.

Among the "average" Americans journalist Michael Sean Comerford has interviewed along Route 66 for his "The Story Cycle" project was shop owner Harley Russell, of Erick, Oklahoma, a COVID denier who railed against Dr. Anthony Fauci, among others.