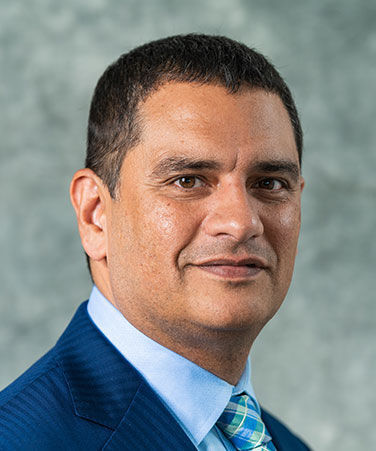 The Arizona Board of Regents selected José Luis Cruz as the finalist for Northern Arizona University’s next president in a vote late Thursday evening.

Cruz is the current executive vice chancellor and university provost at The City University of New York. He has a background in electrical engineering.

As the finalist for the NAU position, Cruz has been invited to visit the university campus starting Friday to meet with students, faculty, staff and community leaders in virtual and limited in-person settings. A community address is scheduled for 4:45 p.m. via virtual livestream to the ABOR YouTube page.

Details of Cruz’s contract will be approved at a future ABOR meeting.

ABOR convened in executive session starting Wednesday to interview its top two candidates, Cruz and Bret Danilowicz, the provost and vice president for academic affairs at Florida Atlantic University. The meeting continued all day Thursday before the board opened the session up to the public just before 10 p.m. Thursday night.

“He is a proven innovator in higher education who keenly understands the enormous opportunities that NAU offers as well as the challenges facing higher education,” Penley said. “His unsurpassed commitment to diversity, equity and inclusion, coupled with a long track record as a leading national advocate to improve educational outcomes for all students — especially those who have historically been underserved — will serve Arizona and NAU well.”

When the board takes action to approve the appointment and contract terms, Cruz will replace Rita Cheng, who has served as NAU’s president since 2014. Cheng announced in September she would not be seeking an extension of her contract, which expires in 2022.

“I am honored that the Arizona Board of Regents has selected me as the finalist for the position of president of Northern Arizona University,” Cruz said in a statement. “Rima and I are very much looking forward to joining the proud Lumberjack family, serving the Flagstaff community, and the peoples of the great state of Arizona. We truly believe a bold and boundless future is within reach.”

Cruz has advocated for national policies to expand opportunities and improve outcomes for underserved students. He chairs the board of directors of The Education Trust and has served on the boards of numerous educational groups including the Institute for Higher Education Policy, the American Association of State Colleges and Universities, the National Survey of Student Engagement, the Presidents’ Alliance on Higher Education and Immigration, and the Postsecondary Value Commission.

Cruz is also a senior member of the Institute of Electrical and Electronics Engineers, a patented inventor and a National Science Foundation Career Award recipient. His research on optical interconnections for massively parallel processing systems was published in scientific journals and presented at international conferences.

Cruz’s selection as the finalist for NAU president came after the board conducted an extensive nationwide search, appointed co-chairs and members of the ABOR NAU Presidential Search Advisory Committee and chose an executive search firm to assist with the search.

“A special thanks to the NAU community for all that you have done, both in terms of serving on the Search Advisory Committee, as well as those of you who provided input to the Arizona Board of Regents,” Penley said during Thursday night’s meeting. “We read your input, we take it into consideration. There’s no question that you’ve made a difference in providing that input to us.”