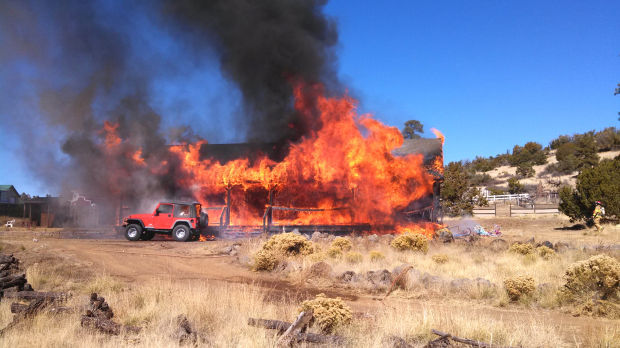 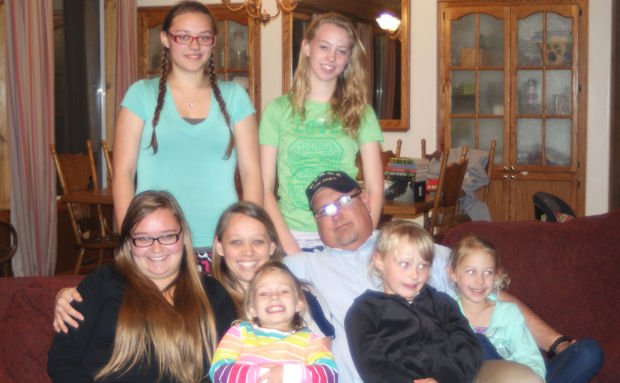 A family of eight is trying to pick up the pieces after a fire destroyed their Doney Park rental home.

The Jones family lost nearly everything — they had no local renter’s insurance —  when a burning piece of material from their grill landed in a pile of empty moving boxes on the other side of their porch shortly after noon Saturday.

Ron and Lisa Jones were inside the house on the 8600 block of Arroyo Trail with their six daughters when the fast-moving blaze started. Their 4-year-old daughter Lily was the first one to see the flames.

“She’s the one who saved us,” said Lily’s 5-year-old sister, Chloe.

Lily ran to her 16-year-old sister Victoria as soon as she saw the fire.

“(Victoria) went running through the house yelling ‘fire,’” said Lisa, who at first thought it might be something small. “So I walk out to the front and I’m like, ‘Oh crap, fire.’”

Lisa and the kids fled the house while Ron tried to put out the flames with a fire extinguisher and a hose, but the blaze was growing too quickly for him to stop it. He then tried to hose down the family’s two vehicles to try to keep them from burning, but the fire soon became too hot.

“When I realized that the hose wasn’t working I knew this was it,” Lisa said.

Lisa, Victoria and 13-year-old Lexi scooped up the three youngest girls and ran down the street, where Victoria and 14-year-old Macy both called 911. By the time crews from the Summit Fire Department arrived less than 15 minutes later, their home was completely engulfed in flames.

It took Summit and Flagstaff fire crews about an hour to fully contain the blaze. One firefighter was taken to Flagstaff Medical Center for smoke inhalation but no one else was hurt. The 1,600-square-foot house was deemed a total loss.

The Jones family had already been through a rough year. The couple had lived in their Mesa home for 13 years before Ron lost his job in May. He found a job in Oklahoma, but was not able to find a house for his family there.

Finally, after months of separation from his wife and daughters, Ron got a job as the manager of Flagstaff Medical Center’s radiology department. The reunited family moved to Doney Park about six weeks ago and was just settling in when their new home burned down.

The girls, who range in age from 4 to 16, watched everything they owned go up in flames. The girls had no clothes besides the ones on their backs and no school supplies. They did not even have time to put on shoes before they fled the house.

“Everyone was crying,” Chloe said.

Bella, 7, was particularly distraught because she thought their four new puppies had died in the fire. A few hours later, Lisa asked one of the neighbor’s sons to go back to the house with Victoria to see if any of the puppies had survived.

“They ran up there and about 15 minutes later, they came running down with puppies,” Lisa said.

Bella was on the porch at a neighbor’s house trying to find a pair of shoes that might fit her, so a fireman used the loudspeaker on the fire truck to tell her the good news.

“He’s yelling on the intercom, ‘Bella, the puppies are OK,’ and she starts jumping up and down,” Lisa said, smiling.

Kenya Summerville and her family were staying in her parents’ large home about five minutes away from the Jones’ house when they saw the fire. Summerville, who attends the same church as the Jones family but did not know them well before the fire, also lost her home in a blaze when she was a little girl. She invited Ron, Lisa and their daughters to move in with them while they look for another house to rent or buy.

“Sometimes it doesn’t feel real because we’re staying at a house with a suitcase with what we have,” Victoria said. “It’s like we’re staying in a hotel. We’re going to go back home.”

That could take awhile. The Joneses still have to fix up their house in Mesa before they will be able to sell it. Ron said he had to borrow money to even move up to Flagstaff. Plus, the family was denied renters’ insurance when they moved to their Doney Park home because the insurance company told them the area was too prone to fires.

Because they had lived in Doney Park for more than 30 days before the fire, their insurance company in Mesa will cover only 10 percent of their lost property. Only the cars, which were both destroyed in the blaze, were fully covered, and Ron said those insurance claims look like they are going to take a long time to go through.

“We’re going to draw straws tonight on who has to donate the kidney because we need money for a down payment,” Ron joked.

In the meantime, a neighbor is loaning Ron a Suburban so he can get to work every day. The family has also seen an outpouring of support from the American Red Cross, the Summit Fire Department, the local Masonic lodge, the Veterans of Foreign Wars, Flagstaff Medical Center and Home Depot. The girls’ teachers at Coconino High School, Sinagua Middle School and Cromer Elementary have helped with some school supplies and have offered to provide counseling. The family has also received a lot of donations from the Church of Jesus Christ of Latter-day Saints.

While Ron, Lisa and their kids were rushing around town Saturday trying to buy enough clothes to wear to church, school and work for the next few days, friends from their old church group in Mesa were already preparing to drive up to Flagstaff with donations. The family received piles of clothing and other items from L.D.S. members in Mesa and Flagstaff over the weekend.

Still, the family lost a lost of things they will never be able to replace. The older girls lost their diaries. Victoria lost her prom dress. Macy, who wants to be a writer, lost her entire book collection and a story she had been penning for more than a year. Lily lost her blankie, as did 7-year-old Bella, and Chloe lost her new school pictures.

“We were thankful that we all made it OK,” Ron said. “We were trying to be grateful that we had each other, but we still couldn’t help but think about the things (we lost) that were irreplaceable.”

Among the things Lisa lost was her wedding dress. She also thought she had lost her wedding ring in the fire, so Ron went back to what remained of their house to look for it in the ashes.

“The next morning, I put on my only shoes and went and slogged through the foam and kept digging in that area where she thought it was until I found it,” Ron said.

Ron also found a plaque that had been hanging in the family’s house. Somehow, it was not destroyed by the fire. On the plaque was a quote that said, “The most important things in life aren’t things.”

The family is trying to keep that motto in mind.

“Now we’re kind of back to square one again but at least this time we’re together,” Ron said.

Meghan reveals she had suicidal thoughts

Danny Neal: A key to the city for a man who owns Flagstaff

What Danny Neal gave Coral Evans, back in the day, was an ear and his undivided attention when she sought him out — which was often. A chance …

That December night, 57 years ago in Prescott, a chill permeated the air. The temperature plunged below 30, jacket weather even for hardy Flag…

Coconino County Board of Supervisors chooses Peru as new manager

After about two hours of discussion in a closed session, the Coconino County Board of Supervisors voted unanimously Tuesday to appoint Steve P…

A Tote-Ally green way to tackle takeout waste in Flagstaff

The use of to-go boxes and takeout bags has skyrocketed with restaurants’ surge of to-go orders since the start of the pandemic. A world with …

Inmates in Coconino County can now receive a COVID-19 vaccination if they choose, though jail officials are reporting a refusal rate close to 75%.