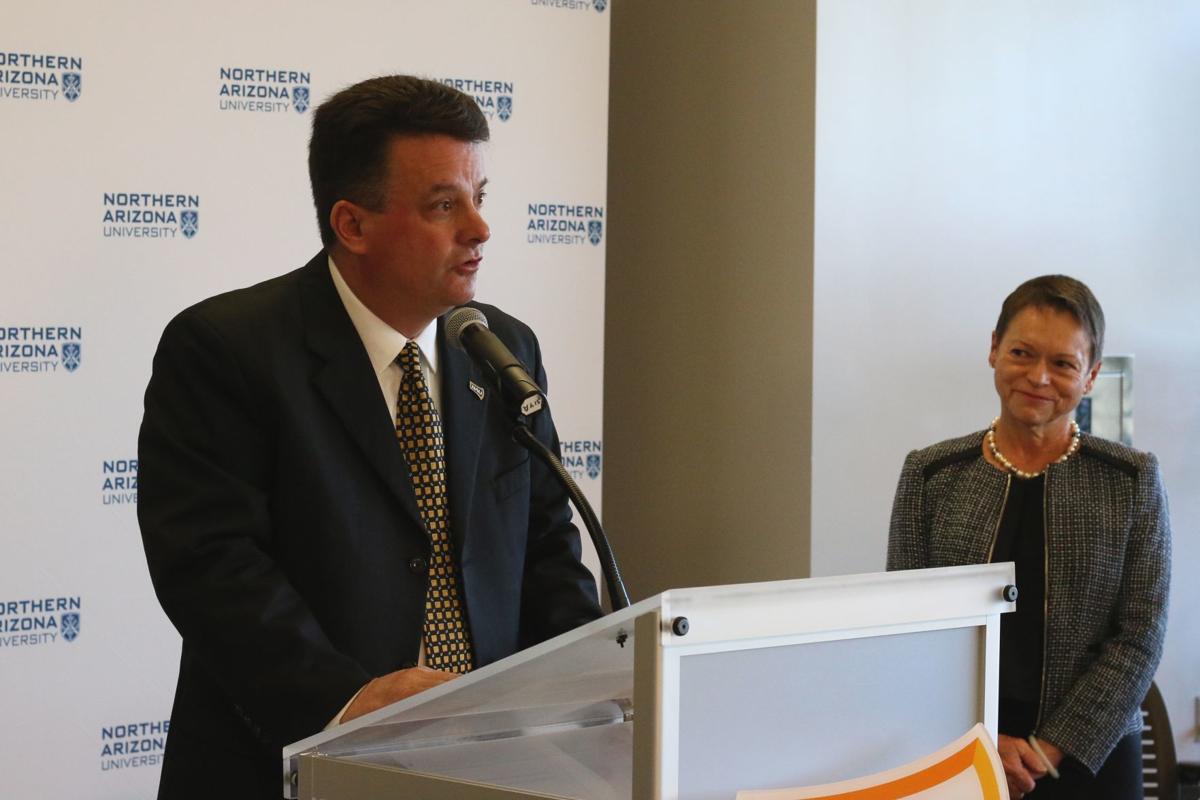 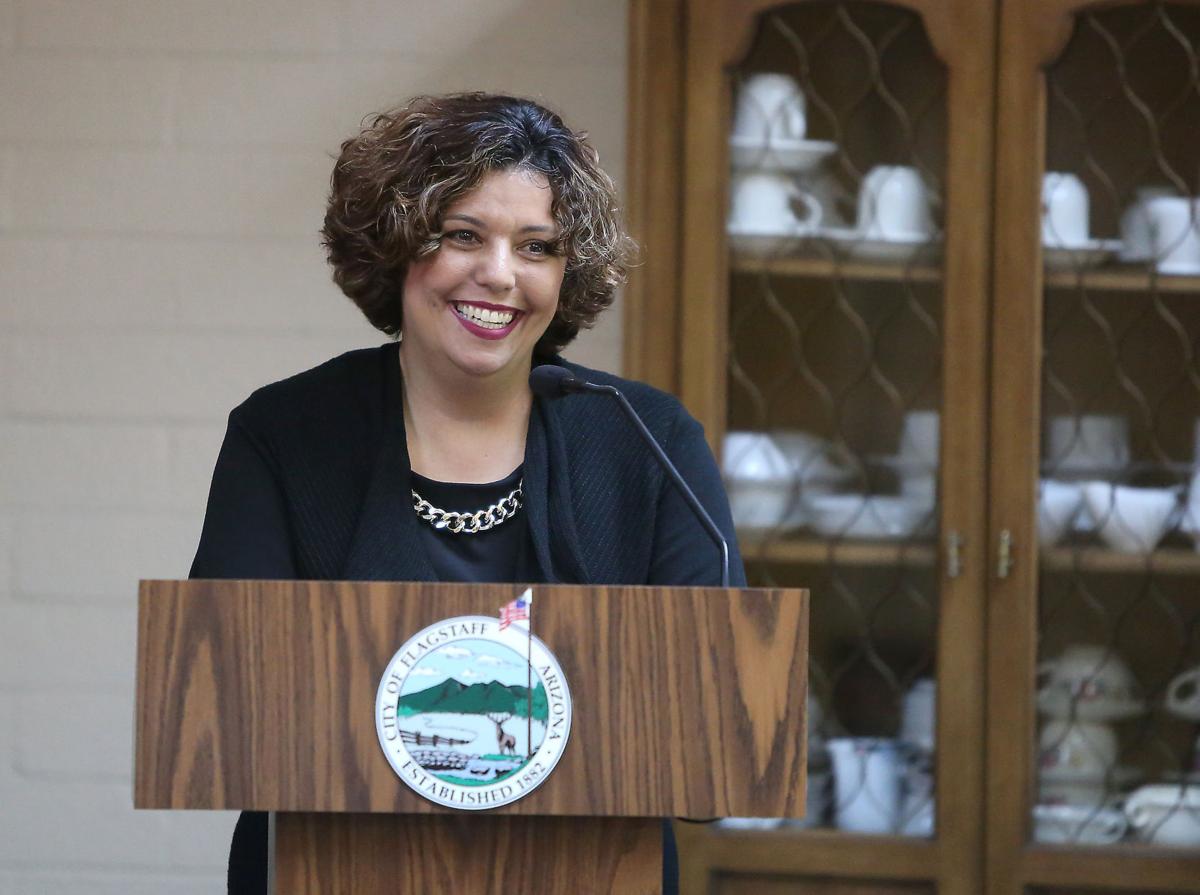 Valeria Chase answers questions from the audience Wednesday night at the Murdoch Community Center about ideas that she would like to put into action if she is the successful candidate for the neighborhood liaison position between the City of Flagstaff and Northern Arizona University. Chase is one of two finalists for the position. 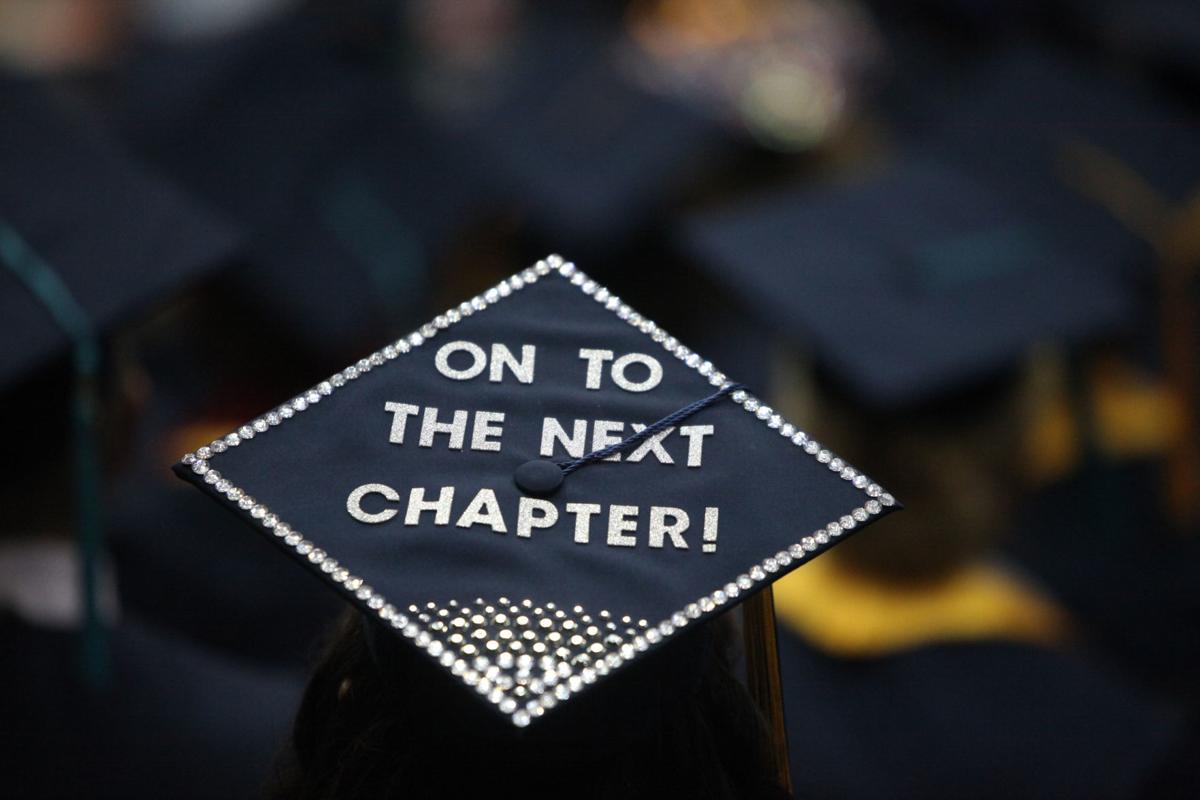 There were plenty of bedazzled and decorated mortar boards Friday morning during graduation ceremonies in the Walkup Skydome at Northern Ariozna University.

Valeria Chase answers questions from the audience Wednesday night at the Murdoch Community Center about ideas that she would like to put into action if she is the successful candidate for the neighborhood liaison position between the City of Flagstaff and Northern Arizona University. Chase is one of two finalists for the position.

There were plenty of bedazzled and decorated mortar boards Friday morning during graduation ceremonies in the Walkup Skydome at Northern Ariozna University.

Northern Arizona University started off the year with one assistant director for Off Campus Life and Community Liaison Programs and is ending the year with a brand new person in the position.

Assistant Director for Off Campus Life and Community Liaison Programs Karissa Morgan was hired in August 2016 to fill the new position created by the city of Flagstaff and NAU. She was supposed to help address issues associate with students living off campus, including being good neighbors and community involvement. Which she did until she announced her departure, nine months later, for a new job in the Valley.

After seven months of refining the jobs duties and responsibilities, reposting the position, and narrowing the field of candidates to two, NAU and the city of Flagstaff announced NAU alumna Valeria Chase as the new neighborhood liaison.

The university also hired new deans for its College of Arts and Letters and for the W.A. Franke College of Business.

Valerio Ferme, the new dean of Arts and Letters, hails from the University of Colorado-Boulder’s College of Arts and Sciences, where he was in charge of programs like the Colorado Shakespeare Festival and the Anderson Language Technology Center. He has a Bachelor of Arts in Biology and Religious Studies from Brown University, a Masters of Arts in Italian from Indiana University and a doctorate in comparative literature from the University of California at Berkley. He’s published two books on his own and co-written another on criticism and a bilingual book of poetry.

Daniel Goebel, the new dean of the W. A. Franke College of Business, comes from Illinois State University, where he served for the last five years as the university’s associate dean for Academic Programs and Maintenance of Accreditation and as a professor of marketing. He’s had research published in numerous journals and textbooks since 1998 and served on the editorial review board for the Journal of Business Research and the Journal of Personal Selling and Sales Management.

The university also announced the creation of a new professorship for the study of criminal behavior. That position is supposed to be filled in the new year.

The university also saw a boost of about 800 new students at all of its campuses statewide this year. The university also asked for a 2 percent increase in tuition for new freshmEn for the next school year. Those new students will also have plenty of housing options on and off campus in Flagstaff, with Fremont Station, a new apartment complex geared toward college students, opening this year and two more apartment complexes, the Standard and The Hub, expected to open next year. NAU is also working on the construction of a new honors dorm on campus and the new Sky View Residence Hall opened on campus this year.

The university is also working on the construction of a new recital hall. The new hall is expected to cost $15 million and will be located between Ardrey Memorial Auditorium and the Performing and Fine Arts building. The new 26,863 square-foot building includes a 250-seat recital hall, a choral rehearsal room, an instrument rehearsal room, a choral library, an instrument library and a lobby.

The university also has plans to tear down the old Peterson Hall on campus to make way for a new STEM academic/research building. The estimated cost of the new building is $139 million and does not include the cost of demolishing Peterson. It will be financed through system revenue bonds. Details of what programs and departments will move into the building have not been fully determined yet. A demolition and construction date has not been set yet.

The university will also spend $17.4 million to renovate the third and fourth floors of the Science Annex, which once housed the chemistry department. The floors will be turned into office space to replace the office space lost by the demo of Peterson.

NAU’s College of Education also received a $1 million gift from George Roberts, the co-chair and co-CEO of KKR, a major California investment firm. Roberts donated the money in honor of his friendship with William Franke, the businessman who donated $25 million to NAU’s College of Business in 2007. Roberts’ donation will be used to fund $5,000 scholarships for minority and first-generation college students who are studying to become teachers. The students who receive these scholarship will be known as “Franke Scholars.”