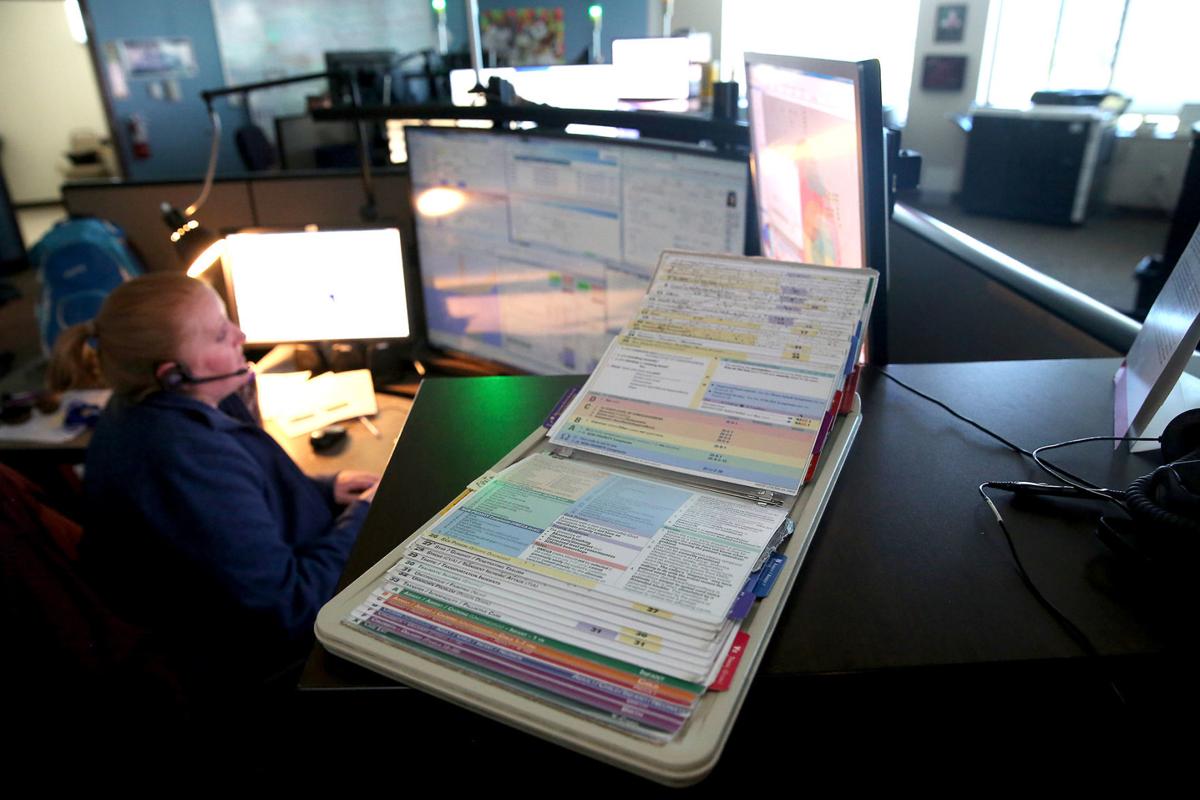 Emergency Communications Specialists working in the dispatch center at the Law Enforcement Administration Facility use manuals to guide them.

An Emergency Communications Specialist stands at her console Wednesday morning in the dispatch center at the Law Enforcement Administration Facility. Dispatchers are often on the front lines dealing with suicidal subjects who call 911 directly or sending first responders to assist when family, friends or members of the public call worried about a persons mental state. 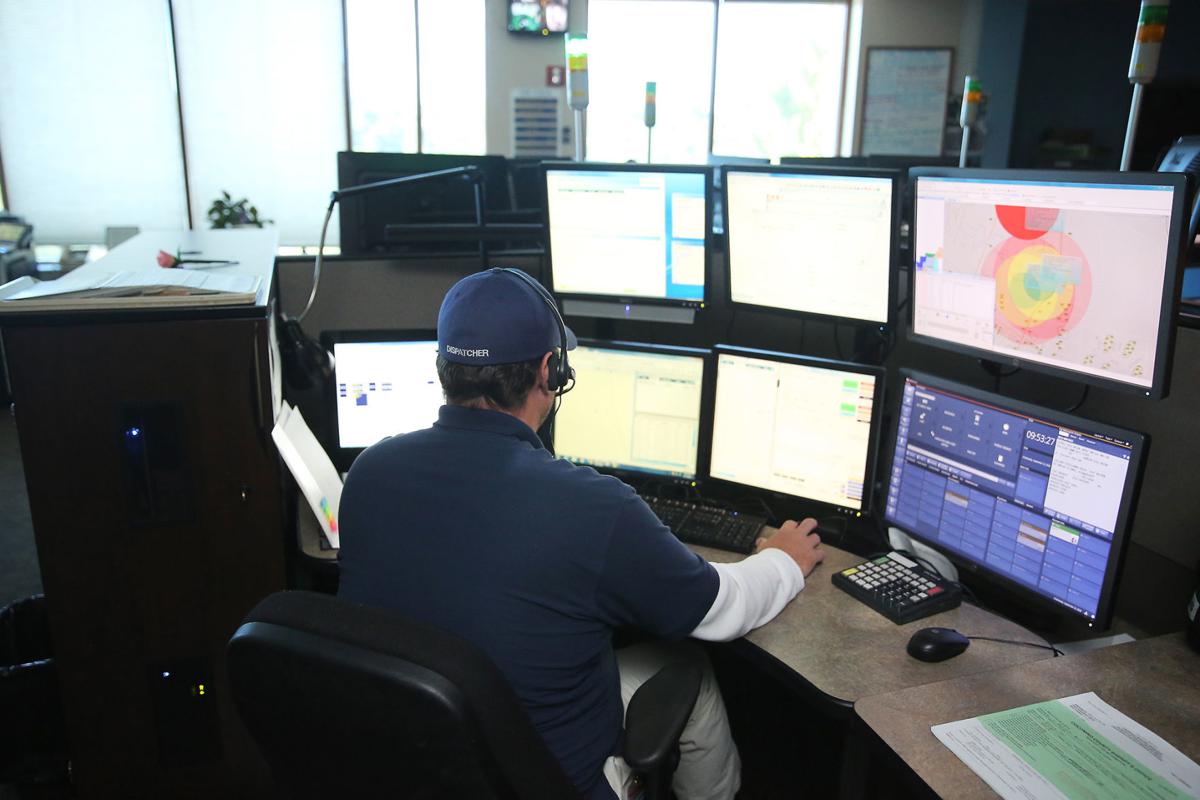 Emergency Communications Specialist Bill Harris sits at his console Wednesday morning in the dispatch center at the Law Enforcement Administration Facility. Dispatchers are often on the front lines dealing with suicidal subjects who call 911 directly or sending first responders to assist when family, friends or members of the public call worried about a persons mental state.

Emergency Communications Specialists working in the dispatch center at the Law Enforcement Administration Facility use manuals to guide them.

An Emergency Communications Specialist stands at her console Wednesday morning in the dispatch center at the Law Enforcement Administration Facility. Dispatchers are often on the front lines dealing with suicidal subjects who call 911 directly or sending first responders to assist when family, friends or members of the public call worried about a persons mental state.

Emergency Communications Specialist Bill Harris sits at his console Wednesday morning in the dispatch center at the Law Enforcement Administration Facility. Dispatchers are often on the front lines dealing with suicidal subjects who call 911 directly or sending first responders to assist when family, friends or members of the public call worried about a persons mental state.

Editor's note: This week is National Suicide Prevention Week. This story is the second of a two-day series on suicide, prevention and response in Coconino County.

The Flagstaff Police Department’s 911 dispatch center receives between four and 10 calls each day from people who are suicidal.

Because the dispatch center is the first contact for people in crisis, dispatchers are trained to respond to a multitude of issues, including suicide, and have a book of protocol that helps guide them through their response and decisions.

Immediately, the dispatchers ask suicidal callers if they are feeling violent, if they have a weapon, if they are attempting suicide, and where their location is.

If they have attempted suicide, the dispatcher gathers information about their method, if they’re alert and if they’re having difficulty breathing.

In order to better assess the mental condition of someone when first arriving at the scene of any call or incident, officers receive Mental Health First Aid training taught by FPD Public Information Officer Sgt. Cory Runge.

The eight-hour course is a national program that gives officers skills to respond to the signs of mental illness and substance abuse.

The National Association of Chiefs of Police and the National Sheriffs’ Association are asking that 100 percent of law enforcement officials be trained in Mental Health First Aid, and both FPD and the Coconino County Sheriff’s Office are working toward that goal, with most of their officers and deputies already trained.

Runge said in order to assess and deescalate the situation, officers approach suicidal subjects like friends, and they keep things conversational and non-judgmental.

FPD officers take suicidal subjects to one of three places: The Guidance Center, Flagstaff Medical Center or to the Coconino County Jail.

Those who are non-violent and have not injured themselves go to The Guidance Center, a not-for-profit community mental health center, where they are seen by counselors and monitored for up to and sometimes more than 24 hours.

Those with injuries, whether it be attempted suicide or otherwise, are transported to the hospital, and those who have committed a crime are taken to jail.

No matter what, Runge said, those under 18 go straight to the juvenile unit of the hospital.

Runge received his bachelor’s degree in psychology and his master’s degree in applied sociology, and he understands how important it is for law enforcement and behavioral health practitioners to work together for the good of those in the community.

“As a criminal justice practitioner, it’s my job to preserve the peace and protect society,” he said. “And the mental health practitioners are there to protect the individual that’s right there in front of them. These organizations and agencies work best when they work together.”

One organization FPD works closely with when it comes to suicidal subjects is Terros Health, a not-for-profit organization in Arizona that provides primary care, substance use and mental health disorder treatment, recovery, crisis and prevention services.

Terros Health has a mobile crisis van that its teams travel in to crisis situations brought on by mental illness and substance abuse.

“We do what we can to help a person where they’re at, no matter where that is,” said Bryan Gest, Terros Health’s director of Northern Arizona Crisis Services, adding that they once met a client outside of a McDonald's.

The way the crisis van works, Gest said, is a person will call the Crisis Response Network’s crisis phone line, and network employees will try to deescalate the situation over the phone. If they are not able to, they dispatch Terros Health, and the organization sends a team to the individual to assess the situation.

Gest said Terros receives calls from and serves about 150 people per month in Coconino County and around 70 percent of the calls received are about someone who is suicidal.

Once the team arrives at its destination, it makes contact with the person and makes sure they’re open to talking with them.

“We have a standard set of information we’re trying to get as far as assessment and their risk of danger, but we weave in therapeutic interaction, build a report to allow them to vent and help them feel like they’re not alone,” Gest said.

If they do not have to call the police or transport the person for further help, the team wraps its visit up by creating a safety plan for the client, which includes resources they already have, resources they can establish within the community and goals for the next 24-48 hours.

The crisis van service provided by Terros is free to everyone and is funded by the state.

“Anyone can use this service for free whether they have insurance or not,” Gest said. “There is no cost to the individual.”

Gest said that part of the problem when it comes to crises is that people wait too long to call and to get help, adding that Terros is not only for suicidal feelings and substance abuse.

“They think what they’re experiencing has to be so severe before they call,” he said. “Anyone who is having a tough time with anxiety or depression, even if they’re not feeling suicidal, is encouraged to call. They’re never going to be refused by the person on the phone.”

Runge said FPD calls Terros Health to respond to a situation after determining a person is not a danger to themselves or others, and Terros Health often contacts FPD if its team feels as if a police response is more appropriate.

Runge said he encourages people who are suicidal and not in immediate danger to call the Crisis Response network line to get in touch with Terros, as the department is trying to not criminalize people who with mental health issues by having a police car drive up to their house for neighbors to see.

Either way, Runge said, FPD responds to 100 percent of the calls for service no matter what.

“Every one of us care about this, and if a person asks for a police response, we will be there,” he said.

Editor's note: This week is National Suicide Prevention Week. This story is the first of a two-day series on suicide, prevention and response …