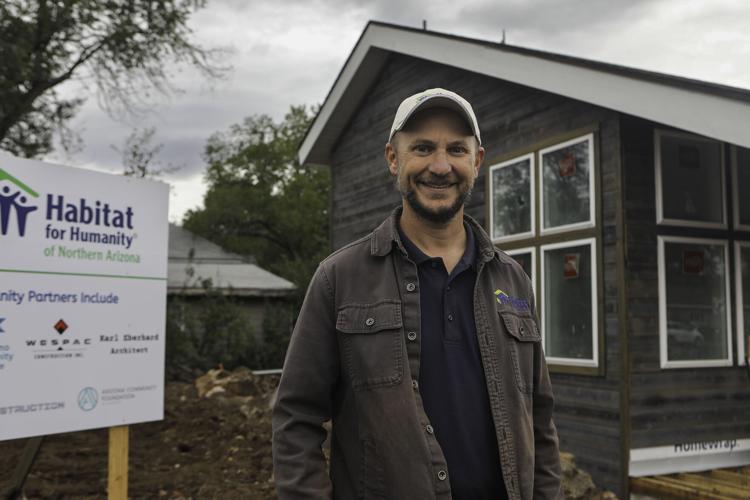 Eric Wolverton, Executive Director of the Habitat for Humanity of Northern Arizona, stands in front of a starter home Tuesday morning that is being built as part of an affordable housing project off of Butler Avenue and South O'Leary Street. Applications to purchase the small family home for as little as $1,000 down are open until November 1, with an expected sale date near Christmas. 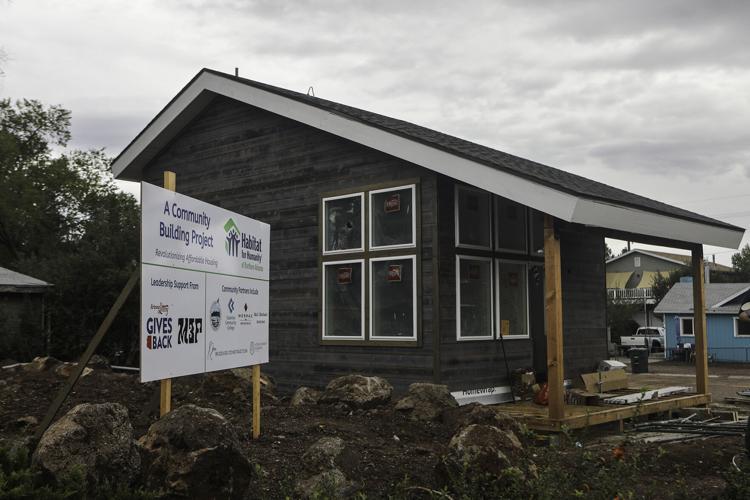 An affordable housing project by Habitat For Humanity is under construction Tuesday morning off of Butler Avenue and South O'Leary Street. 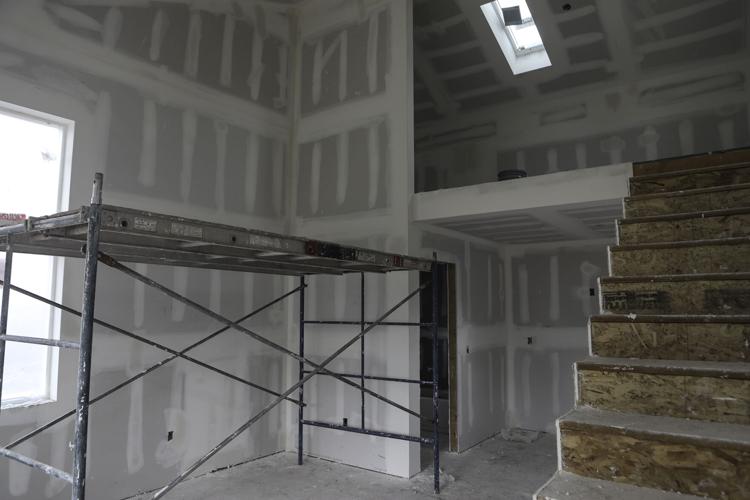 An affordable housing project by Habitat For Humanity is under construction Tuesday morning off of Butler Avenue and South O'Leary Street. Applications to purchase the small family home are open until November 1 with an expected sale date near Christmas. 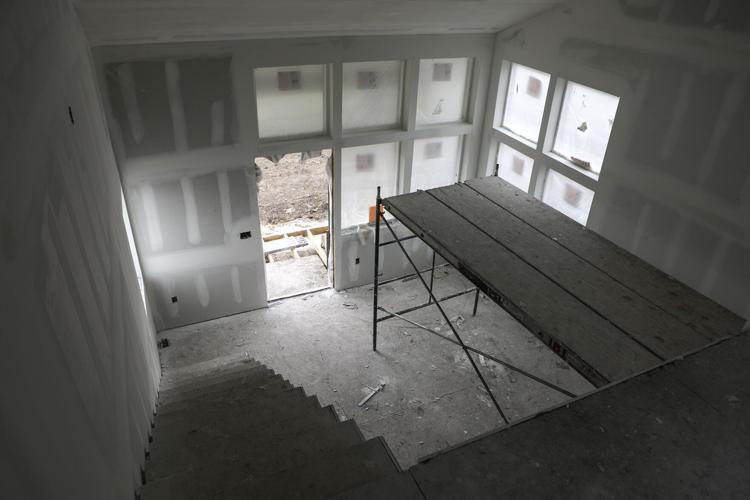 An affordable housing project by Habitat For Humanity is under construction.

Habitat for Humanity of Northern Arizona has recently shifted its attention to starter homes, with the program's pilot house set to be completed soon.

The first two starter homes will be on a plot on Butler Avenue, part of a land trust from the city. Each will cost $100,000 to build, funded by donations. Money for the construction on the first has been donated from the M3F festival in Phoenix, with the project’s general contractor, Wespac Construction, providing its services for free. The second has been funded by individuals using the Arizona tax credit. The Arizona Lottery's Gives Back program also contributed, providing half of the total cost of both starter homes.

Due mostly to their size, the starter homes can be built quickly, with about eight weeks between breaking ground and finishing touches. While the foundation is being prepared on site, students in Coconino Community College’s home construction program are framing the homes on campus.

“Basically, it looks like a jigsaw puzzle of 12 big pieces and we literally just bring them out on a flatbed truck and we put up the house in three days,” Wolverton said.

When finished, each home will be 400 square feet, with a full bathroom, kitchen, living area and a loft-style bedroom, enough room for a family of three. They are also designed to be close to net zero emissions, using only electric and solar energy.

The houses will provide an easier entry to home ownership in Flagstaff, but what Wolverton said is “the game changer” is the program’s savings equity model.

“Anybody can build the homes and sell them; I can do that all day long in Flagstaff,” he said. “But how do we get people out of the system so we can get new people into the system? If we know we have a backlog of thousands of people on waiting lists, how are we going to get to them unless we graduate people out of the current list?”

Habitat provides financing for mortgages to the homeowners with a 0% interest loan. For homeowners, each starter home will require a $1,000 down payment, followed by a $833 per month principal, which will translate to $10,000 of savings each year they are in the house. Adult family members are also required to put in 200 hours of sweat equity on either their own or another Habitat home.

After three years, homeowners can sell at any point and receive the entirety of their equity savings to do whatever they want with. They won’t get anything from the home’s increased value, to allow Habitat to continue selling it to low-income families.

“This is a major difference in comparison to our past homes that we’ve built,” Wolverton said. “Usually, they were considered forever homes. What we are now doing is we are setting it up so our homes are actually going to function to create this self-wealth savings platform for multiple families per unit.”

He said equity programs similar to this one are what is most needed in Flagstaff housing.

“There are no shared equity models, other than what we have. That’s the problem. We can’t solve family financial issues if we don’t create a savings program for them to get out of the program,” he said.

Traditional housing solutions in Flagstaff, including affordable units, don’t include equity programs, making it hard for people to save and move onto the next step in the housing continuum. Wolverton said his hope was for the city to develop/implement a network of programs that could help people at earlier stages build their savings and move to the next step.

For example, he said a tenant could use their savings from shared equity in a transitional housing program to afford the down payment on one of the starter homes, which through its own equity program would continue to grow their savings.

In this scenario, he said, “an individual can go from homelessness to $30,000 in savings in five years in Flagstaff."

While applications for the first starter home haven't been put out yet, Wolverton said Habitat has been expecting a “huge response.” Its most recent home -- a four-bedroom, two-bathroom house sold for $402,000 in June -- had 171 applications.

Eligibility for Habitat homes is based on income (less than 80% AMI, which in 2022 is $61,850 for a household of three in Flagstaff) and housing need.

Part of why Habitat is moving away from its earlier model of larger, long-term houses is the area’s rising cost of living.

“We just can’t keep up with those prices and the cost of goods and the cost of those great professionals, which is why this smaller footprint is so much better for us,” Wolverton said. “Now we’re able to build in volume.”

The shift also has to do with Flagstaff’s volume of need. The city’s 10-year housing plan includes a gap analysis, which found that 12,072 Flagstaff households had an affordable housing need and that the city currently has an undersupply of 7,976 units. One of the plan's goals is reduce the need for affordable housing through unit creation and subsidy provision, impacting at least 6,000 low-to-moderate income residents.

Habitat's starter home model allows for denser building, as, for example, the lot that holds the first two starter homes would only work for one typical house.

“Now we’re taking advantage of our land and we’re building denser,” Wolverton said. “Because we’re landlocked, we have no place to go, no place to expand. ...So we’re getting out of conventional housing, now we have the ability to build more units on less land.”

The starter home program is designed to be able to house multiple families over time, with people coming in, building their savings and then moving elsewhere in Flagstaff.

After 10 years, the starter home will be fully paid off and ownership rights revert to Habitat. Homeowners can then enter a rental lease or sell back to Habitat, receiving the $100,000 from the equity program. This ensures that the house continues to cycle through the market and help out other families in need.

Going forward, Wolverton said, the plan is to continue to build starter homes in Flagstaff. It has already started the next step, working with Vintage Properties, part of the Timber Sky development, which will provide three acres to build 48 more starter homes in the next five years. (For comparison, Habitat has built a total of 24 houses in Flagstaff so far during the 30 years it has operated in the city.) Work on the second starter home will also start as soon as the first is completed.

“But in order to do that, we need the community’s support, we need the City of Flagstaff’s support, we need private industry support. That’s the only way to holistically do it. It has to be done through partnerships and that’s how I look at shared equity. It’s not just a savings program; it’s about a shared experience and ability to use all of our talents and skills and tools to holistically solve a problem because Habitat can’t do it by itself," he said.

More about Habitat can be found at habitatflagstaff.org.

An earlier version of this article left out a sponsor for of Habitat's pilot starter homes. Arizona Lottery's Gives Back program provided half of the total costs for the program's first two starter homes on O'Leary St.

Scientists: Why there's more light than there should be in the universe

The reason Japanese fans clean up after World Cup matches

The reason Japanese fans clean up after World Cup matches

A winter wonderland in Denmark? Why you should visit Tivoli Gardens in December

A winter wonderland in Denmark? Why you should visit Tivoli Gardens in December

Eric Wolverton, Executive Director of the Habitat for Humanity of Northern Arizona, stands in front of a starter home Tuesday morning that is being built as part of an affordable housing project off of Butler Avenue and South O'Leary Street. Applications to purchase the small family home for as little as $1,000 down are open until November 1, with an expected sale date near Christmas.

An affordable housing project by Habitat For Humanity is under construction Tuesday morning off of Butler Avenue and South O'Leary Street.

An affordable housing project by Habitat For Humanity is under construction Tuesday morning off of Butler Avenue and South O'Leary Street. Applications to purchase the small family home are open until November 1 with an expected sale date near Christmas.

An affordable housing project by Habitat For Humanity is under construction.