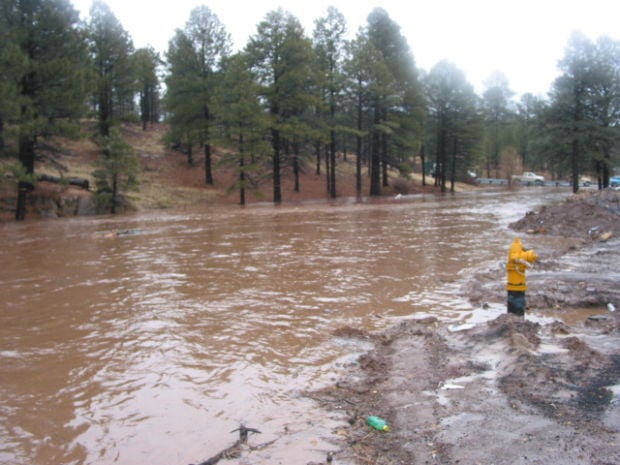 Courtesy photo from flooding in 2004-05 in the Rio de Flag below Sinagua Heights.

courtesy photos  from flooding in 2004-05 in the Rio de Flag below Sinagua Heights. 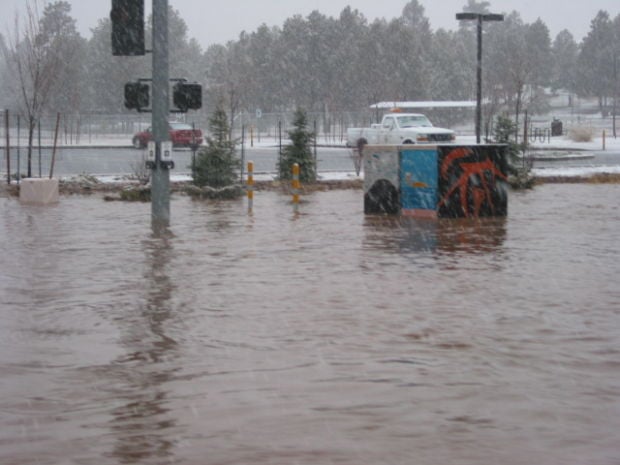 Courtesy photos from flooding in 2004-05 in the Rio de Flag below Sinagua Heights.

Winnie Ennenga remembers the flooding in Elk Run in the winter of 2004-05 because she has photographs of it.

The photos show raging water from the Rio de Flag flooding her back yard and lapping at back doors up and down her neighborhood.

Had Foxglenn Park been fully built, she’s sure the trails and ballfield turf would have been torn out.

“And now they want to pave over more of this drainage?” she asks incredulously. “Where do they think all that water is going to go?”

Ennenga is referring not just to one new project proposed for the Rio de Flag drainage in south Flagstaff but three: Canyon del Rio, Little America Neighborhood and Juniper Point.

Together, the properties will contain 4,500 homes along with shops and offices on 800 newly developed acres. About 330 acres out of 1,125 will be left as open space. City planners concede they have not yet modeled the stormwater runoff when all three projects are fully built, but it is early in the planning process.

“We are getting them to work together,” said Jim Cronk, Flagstaff’s soon-to-retire planning director, adding that joint meetings have begun to discuss the shared costs of new roads, waterlines and other infrastructure.

Still to be determined are the costs each developer might bear for an extension of J.W. Powell Boulevard to a Fourth Street extension south of Butler Avenue, as well as improvements to both Butler and Lonetree Road, among others. Costs could readily total tens of millions of dollars.

Because the Little America project will also include a golf course, developers may be asked to chip in for an expanded network of reclaimed wastewater pipelines to help irrigate the course.

In fact, Friends of Flagstaff Future would like to see all three projects install not only treated effluent lines for use by residents but also rainwater harvesting systems while not building grass lawns and golf courses to reduce water use.

“We believe that development should pay for itself and the community should not be burdened by growth with new taxes,” wrote Marilyn Weissman of F-cubed in response to written questions by the Daily Sun. “It’s evident from the discussions so far about Little America that there will need to be more wells, treatment plants (both potable and reclaimed), roads and other infrastructure improvements if this area is to develop.”

But another impact of all the new growth, say the developers, will be an expanded housing supply and more jobs. Little America estimates it will provide 500 new jobs in its second hotel and conference center as well as at the golf course and in the 400,000 square feet of commercial space that is planned.

That has brought endorsements from the Flagstaff Chamber of Commerce and Economic Collaborative of Northern Arizona, which note that Flagstaff will be attracting a rising number of recreation-minded retirees as the baby boomers age along with upscale vacationers.

Realtor Ann Heitland says that faster projected growth in the Southwest than IN the rest of country is creating an optimistic attitude among homebuilders. There is also a ready market for more second homes developing in Flagstaff at prices between $350,000 and $450,000 as the Valley economy recovers.

That’s not the market, however, that zoning attorney Nick Wood at Juniper Point sees for his project.

“It is being designed for people who live in Flagstaff, not second-homes,” he said.

Noel Griemsmann, the urban planner who is designing Juniper Point, said it reflects the “new urbanist” movement of walkable neighborhoods with different types of houses clustered around local-serving shops and offices.

Robert Semple, principal owner of Canyon del Rio, says his project will also be built to appeal to local residents, although the businesses along the Butler Avenue frontage may be more car-oriented.

Each of the projects intends to set aside open space for public trails and parks while protecting the Rio de Flag from runoff.

Two of the projects — Juniper Point and Canyon del Rio — have filed rezoning applications that will wind up before the city council in three to six months. Little America only recently received a regional plan amendment approval, with a rezoning application to follow. Each has estimated that buildouts will take at least five to 10 years and possibly longer.

That makes sense, says Heitland, the Realtor, noting that even in the pre-recession boom times, Flagstaff was generating sales of only 400 new homes a year.

That also suits Weismann of F-cubed, whose group would like to see not only phasing that doesn’t get ahead of water and sewer treatment capacity but also smaller houses on smaller lots that will be more affordable in high-cost Flagstaff.

“We understand that these landowners have the right to develop their properties per their current zoning,” she wrote. “It’s important to us that these remaining lands within our growth boundary be phased and developed in ways that meet the housing, retail and employment needs of our community and not outside interests.”

Courtesy photo from flooding in 2004-05 in the Rio de Flag below Sinagua Heights.

courtesy photos  from flooding in 2004-05 in the Rio de Flag below Sinagua Heights.

Courtesy photos from flooding in 2004-05 in the Rio de Flag below Sinagua Heights.