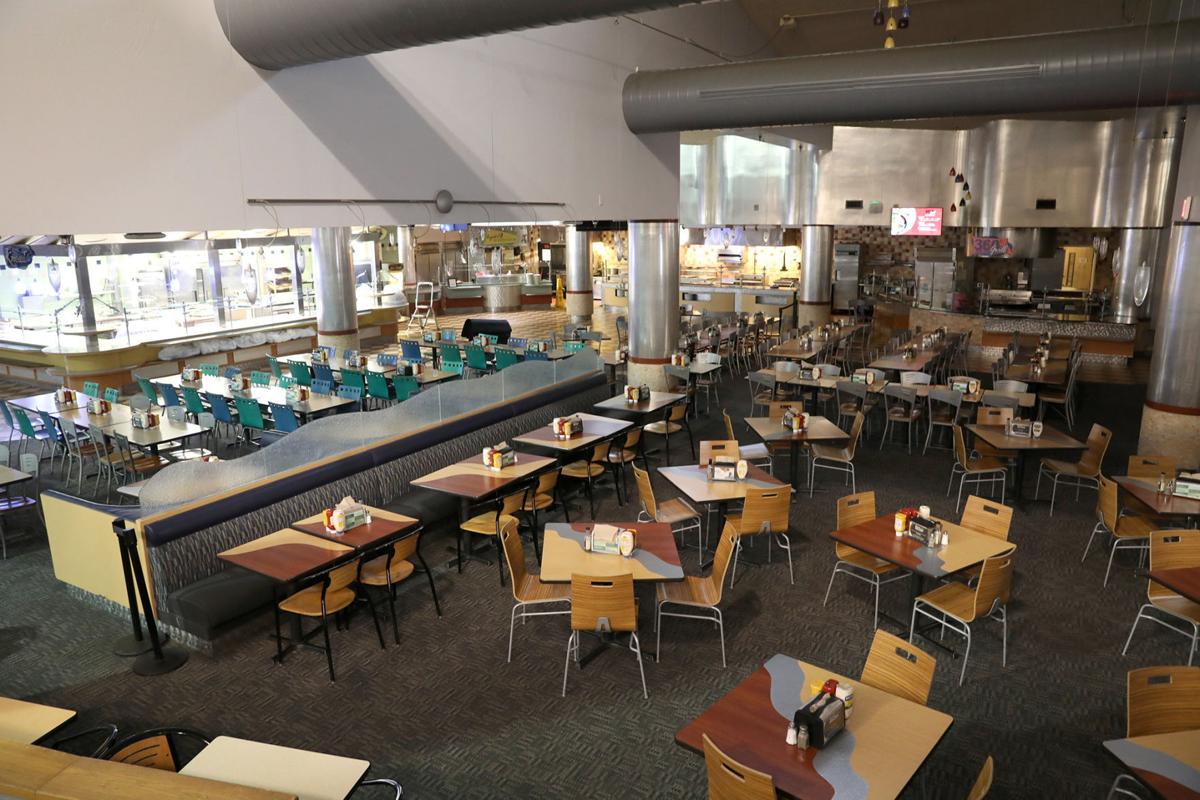 An empty dining hall during spring break at Northern Arizona University remained mostly empty for the rest of the semester after in-person classes were called off. 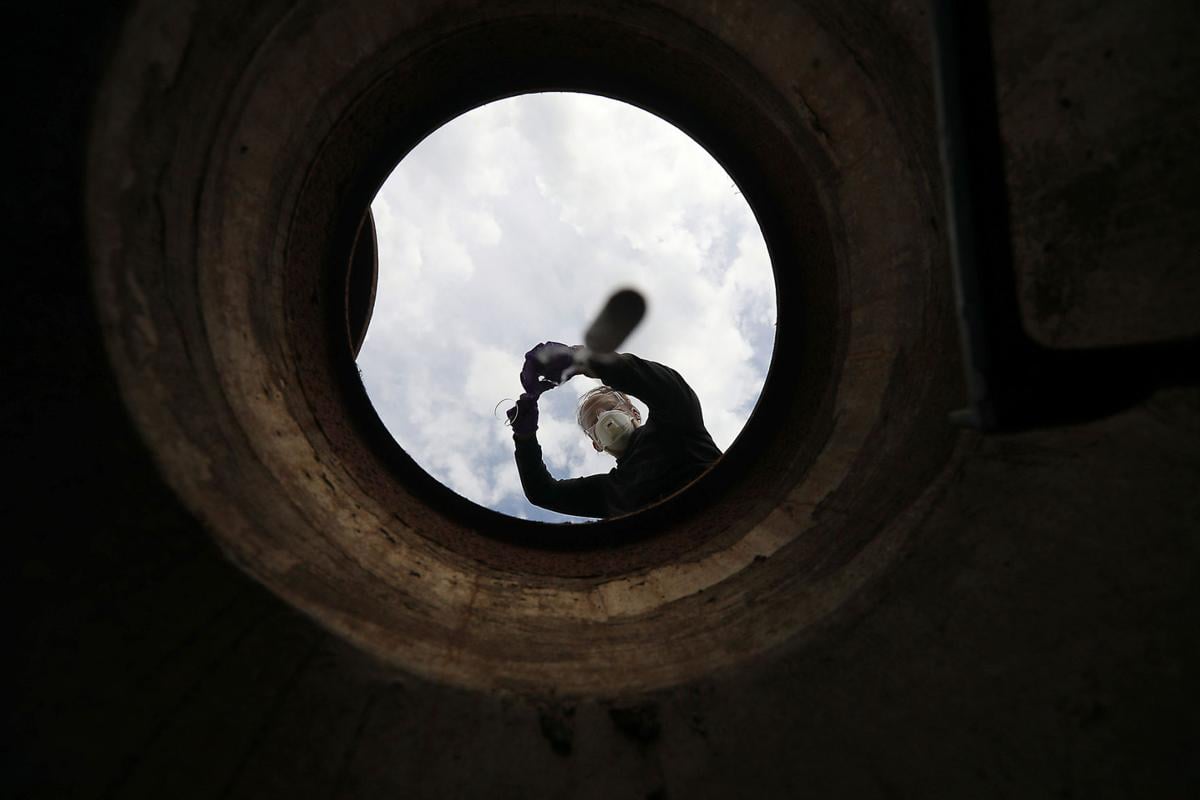 Researcher Crystal Hepp lowers a tampon into a manhole over a sewage line on the Northern Arizona University campus in November. Hepp and graduate student Daryn Erickson are using a novel method to track COVID-19 levels at the university. 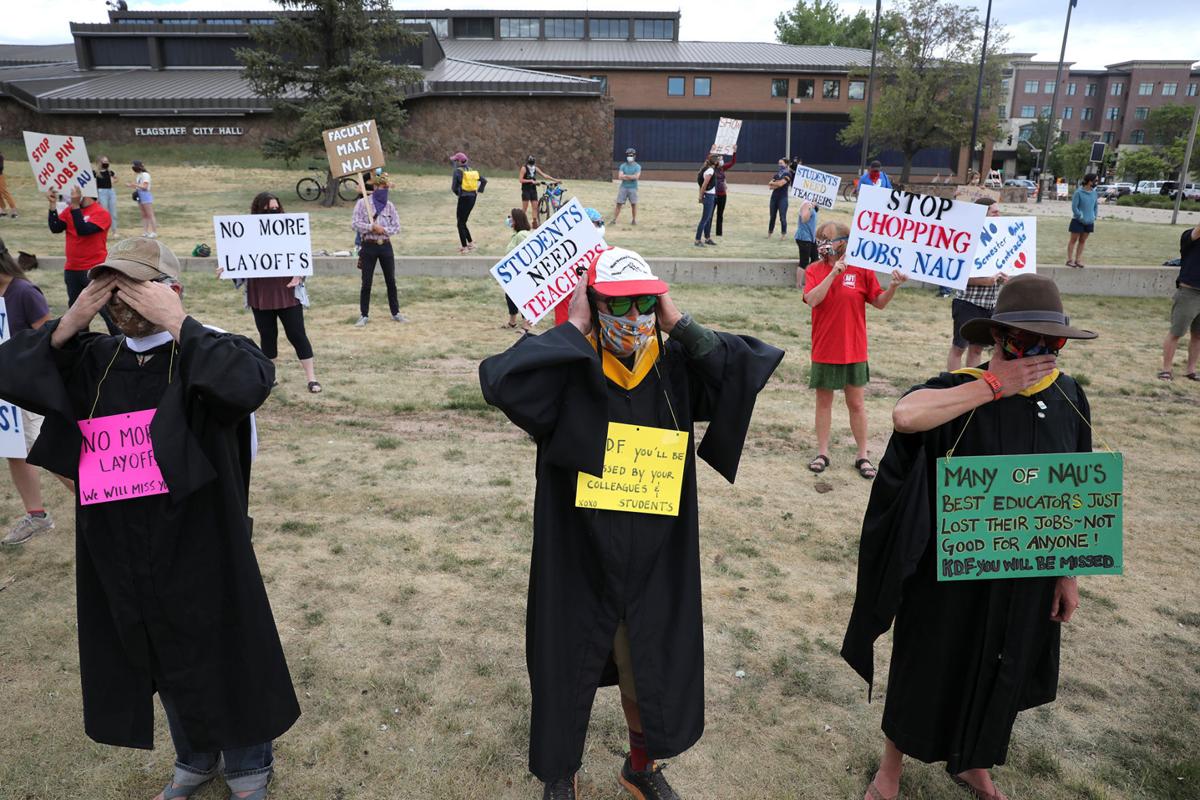 A trio of protesters wearing college gowns covers their ears, eyes and mouth in May during a protest on the city hall lawn in response to budget cuts and layoffs at Northern Arizona University.

For the thousands of students, faculty and staff at Northern Arizona University and Coconino Community College, “the college experience” took on new meaning during 2020 as the two local institutions of higher education worked to adapt to the COVID-19 pandemic as other big changes occurred on campus. Here are the top NAU and CCC stories from 2020:

While K-12 school districts spent the start of the 2020-21 school year with students attending classes from home, after ending the spring semester remotely, NAU and CCC adopted hybrid learning for the fall: part online, part in-person, depending on the particular class. Hands-on courses and labs generally offered more sessions for students on campus. Through NAU Flex, students were able to attend classes either online or in person simultaneously, alternating between the days they were permitted to attend on-campus classes physically.

NAU fall semester classes began online only on Aug. 12 and campus opened for the first day of in-person instruction on Aug. 31. The semester was moved up to end classes before the Thanksgiving holiday in an effort to reduce transmission of the coronavirus by traveling students.

In early September, NAU President Rita Cheng announced she will be leaving the school. She began her term as NAU’s 16th president six years ago and shared that she will not be seeking an extension of her contract, which is set to expire on June 30, 2022.

The Arizona Board of Regents formed a search committee that hosted meetings with faculty, staff, students and community members to determine ideal leadership characteristics for the next NAU president, including transparency, inclusivity and respect for faculty. Committee chairs Regents Fred Duval and Lyndel Manson said they will aim to fill the position as soon as they find the right person.

Northern Arizona University will soon need a new president: after six years in the role, Rit…

Months before her announcement about leaving, Cheng made headlines throughout the state when the Arizona Office of the Auditor General released a report that flagged $40,000 worth of travel expenses -- including international business-class flights made by Cheng and her husband -- for potential misuse due to lack of documentation.

In response, students started calling for Cheng’s resignation, referencing rising tuition, budget issues, and a lack of mental and social resources for students, among other grievances. At the state level, Rep. Walt Blackman introduced an Arizona House bill created alongside Flagstaff talk show host Jeff Oravits that would prohibit state officials, including university presidents, from being reimbursed for airfare upgrades.

Cheng said she would reimburse the NAU Foundation some of the $37,785 it gave her for airfare to Russian and Israel, visas to Russia and early check-in fees.

As the spring semester came to a close, NAU leaders began projecting an estimated loss of up to $100 million, almost 20% of the university’s operating budget, in the coming fiscal year as a result of enrollment declines, a trend they said would be worsened by the pandemic. Departments were asked to adjust their fall 2020 budgets to schedule for 25% lower enrollment and personnel expenses, prompting a large round of layoffs in May.

In a statement, Cheng said fewer than 100 faculty positions were affected, none of which were tenure track, but an official number of total jobs lost was never publicly released.

The following month, NAU announced employees would need to take tiered pay cuts between 2.3% and 4.6%, and between six to 10 days of personal flex time in order to cut an additional $6 million in response to its projected revenue shortfall. NAU Executive Team members took 10% pay cuts.

When the first day of in-person classes began Aug. 31, though, the enrollment decline was not as much as anticipated. The university was down 5% of its student enrollment, with a head count totaling 29,594 total students. Lost tuition and fees, along with state appropriations and the loss of revenues from canceled events, led to a total decrease of $78 million in expected revenues for the year. It was NAU’s second year of declining enrollment for the fall semester and faculty layoffs accounted for 700 fewer classes than the previous year.

As of the first day of in-person classes Monday, the 20th day of the fall semester, Northern…

Four new programs were finalized at CCC this year — the Veterinary Technician, Marine Maintenance Technician, Cyber Security and Automotive Technician programs — in order to be offered to students in early 2021. The release date was originally set for fall, but was delayed by the pandemic as CCC officials worked to cut operating costs and prevent faculty furloughs and layoffs.

Each of the programs will accept between 12 and 15 students per year and will be included in the Coconino Association for Vocations, Industry and Technology (CAVIAT) to allow local high-schoolers to begin these courses before graduating.

Various NAU researchers took on COVID-19 as a new subject this year to learn more about the emerging novel coronavirus and its transmission. TGen North, a collaboration between NAU and the Translational Genomics Research Institute in Phoenix, began testing samples for COVID-19 positivity in March.

The following month, NAU’s Pathogen and Microbiome Institute partnered with a Danish biotech company to begin testing a cancer drug for its effectiveness on COVID-19 and also joined the Arizona COVID-19 Genomics Union in a statewide initiative to sequence the virus’s RNA genome in positive patient samples to search for different strains.

NAU scientist Crystal Hepp created a COVID-19 wastewater testing program that was used both on campus and in other areas of Flagstaff to get a sense of the level of the virus within the community and how it relates to measures such as mask mandates.

Testing the flow: Researchers drop tampons down sewers to test for COVID on campus

COVID-19 testing was required for NAU students living on campus for the fall semester, and when in-person classes began the university began randomly testing 1,000 members of the campus community every week as part of its COVID surveillance efforts. NAU administered more than 34,000 total COVID-19 tests over the course of the semester.

At the end of the semester, to the surprise of students and faculty, students who had not completed their mandatory testing lost their access to Blackboard Learn, the learning management system the university uses for its classes’ online materials, including assignments and exams, until they were tested or filed for an exemption.

Northern Arizona University has cracked down on COVID-19 testing infractions this week, lock…

New policies and procedures in response to the pandemic were a point of concern for students, families and even internal departments this year.

After spring break, students who left campus to complete the semester remotely were informed they would not be receiving refunds for housing or meal plans, and in the fall as students made alternative plans for the semester, they discovered they would be unable to get out of their leases at off-campus student-focused apartment complexes. On campus, meanwhile, fall move-in dates were changed and study abroad programs were canceled, causing students and families to struggle to adjust existing travel plans.

An internal report on local COVID-19 transmission by NAU’s Center for Health Equity Research advised against reopening campus for in-person classes prior to the fall semester, expressing concerns that were echoed in protests after the semester began by groups including graduate teaching assistants, who held a “die in” to demand personal protective equipment and other improvements to pandemic working conditions.

This semester, Jialin Yang planned to live at The Jack student housing development as she at…

CCC completed its $1 million construction lab at its Fourth Street campus in January. The project was primarily funded by the Del E. Webb Foundation and included renovations to both a classroom and workshop that are used by construction technology management students.

Following an executive order from Gov. Doug Ducey in March to slow the spread of COVID-19, Arizona schools postponed the return of their stude…

It may violate some unwritten year-in-review story rule, but by far the most significant weather event in Flagstaff in 2020, with potentially …

Health Year in Review: The year of COVID-19 in Flagstaff, Coconino County

Throughout the world COVID-19 topped health news this year as the illness first emerged in Wuhan City, China, and then spread exponentially wi…

Coconino County has been a leader in local COVID-19 response from the beginning, with its health department collecting specimen samples for CO…

City of Flagstaff Year in Review: A pandemic and pension policy

With restrictions still in place, the year inside and out of city hall was dominated by COVID-19. But between business closures and mask manda…

Flagstaff saw massive police protests, the coronavirus pandemic's impact on the courts, and high-profile cases reach a conclusion in 2020. Her…

An empty dining hall during spring break at Northern Arizona University remained mostly empty for the rest of the semester after in-person classes were called off.

Researcher Crystal Hepp lowers a tampon into a manhole over a sewage line on the Northern Arizona University campus in November. Hepp and graduate student Daryn Erickson are using a novel method to track COVID-19 levels at the university.

A trio of protesters wearing college gowns covers their ears, eyes and mouth in May during a protest on the city hall lawn in response to budget cuts and layoffs at Northern Arizona University.