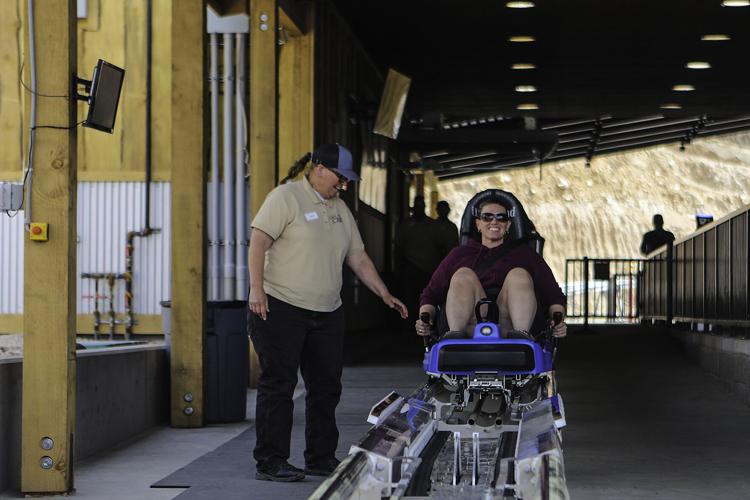 Canyon Coaster Adventure Park employee Robyn Bagby gives Kelly Anderson instructions on how to use her sled Thursday afternoon as she prepares to take a ride on the new alpine slide style coaster in Williams. The park also offers summer and winter tubing, with plans to install miniature golf and a ropes course. 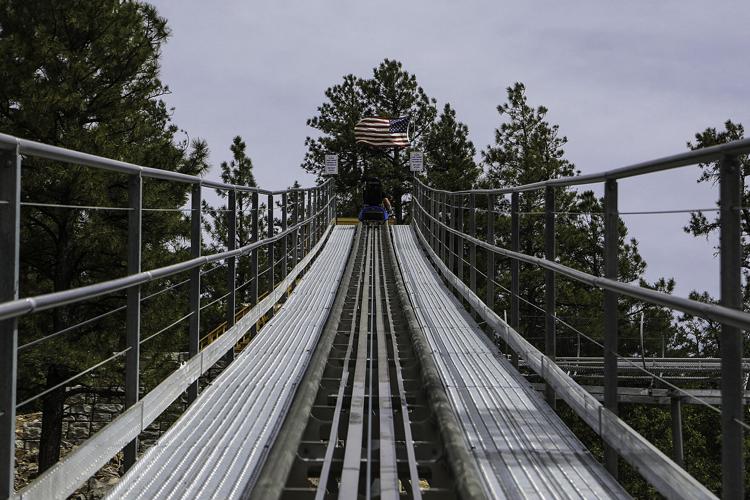 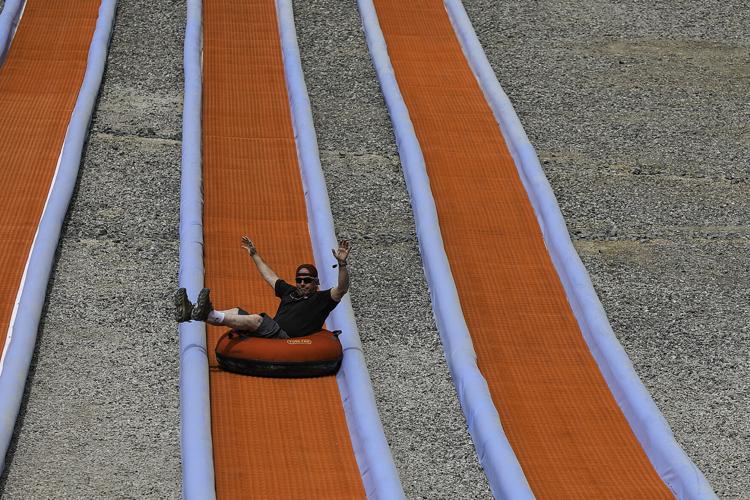 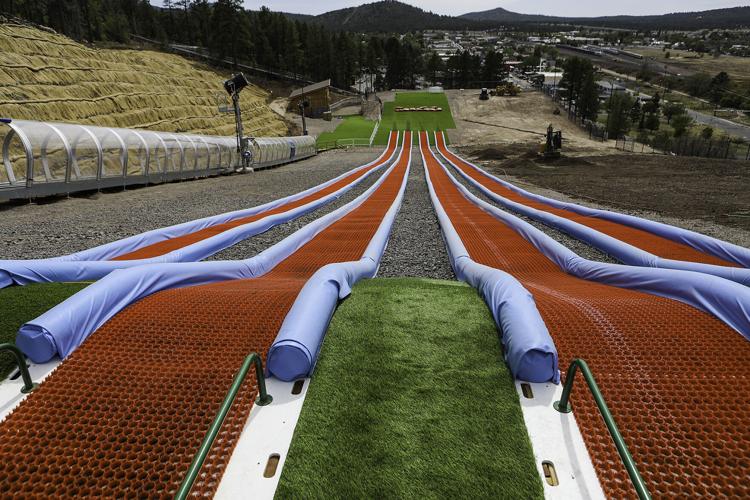 Four summer and winter tubing runs are ready for use Thursday morning at the Canyon Coaster Adventure Park in Williams. The business plans to offer 10 runs total eventually and will provide the community with a sledding alternative in the winter because the company will be able to make snow for the hill. 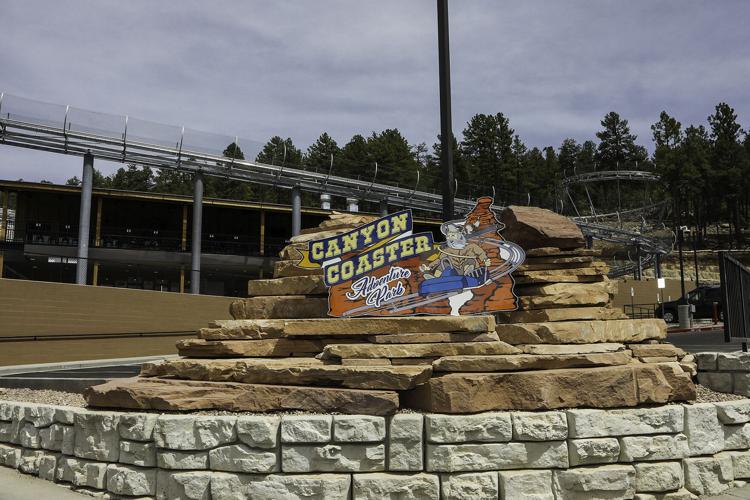 The Canyon Coaster Adventure Park is open for business Thursday afternoon in Williams. The park boasts an alpine slide style coaster, a summer/winter tubing hill, a cafeteria and a bar, with plans to install miniature golf and a ropes course.

There’s an air of suspense hanging over the new Canyon Coaster Adventure Park in Williams. It starts with a sign by the front entrance — “Bar Coming Soon!” — and continues up the steps by the ticket booth. The guardrails stand at attention, eager to accept a crowd much larger than the few people that trickle in on a Thursday afternoon.

TV screens on the outdoor patio are dark and dormant, ready to stream live video feeds from throughout the park. The exterior wood paneling of the central building has a fresh-cut color that longs for a little weather. Staff, too, are poised and expectant of the seasons to come. They welcome guests to the loading platform of the main attraction — The Canyon Coaster.

The Canyon Coaster is technically an “alpine coaster” — distinct from traditional roller coasters for its sled-like seating, hand brakes and low-to-the-ground track. It’s a ride that was invented in Germany, designed to take advantage of existing topography rather than an elevated structure.

It gains ample height — about 1,200 feet — by climbing into the steep, pine-laden hillside at the back end of the park. From the crest you can see all of Williams and a stretch of the high plains that span between the town and the Grand Canyon.

It’s quiet up there. The coaster rails clink lightly. It’s a whisper compared to the noise of true roller coaster. The metallic patter clicks like a countdown. Clink. Clink. Clink.

And then it drops. A slow glide around a curved rail. Then speed. More. More. The sled whips through the pines. With the hand brakes wide open, the coaster can reach a speed of about 27 mph. But it feels much, much faster. The ground rushes just below the rail. The trees seem close enough to touch. Then arcing through the sky, the whole park turns below. For a little under two minutes, the coaster whisks riders on a snaking route before settling back at the platform.

“Did you enjoy the ride?” one of the attendants asks.

Maybe the attendant is Izayah Cooper, come to the adventure park staff from active duty with the National Guard.

Cooper says the experience is  “180 degrees from what" he's used to.

“Everyone that you deal with is always having a good time. Just boosts the attitude of town," he said.

Or maybe you’ll be helped by Robyn Bagby, former military subcontractor who now wears a relaxed smile when she excitedly asks ,“Who likes to go fast?”

Bagby is also pleased to be on the park staff. It’s a good gig, she says — 40 hours a week, decent pay and “it’s fun.” She can’t stress that last part enough.

“Positivity. Laughter. Happiness,” said Bagby. “Something like, ‘Yay, we can have fun and we don’t have to drive eight hours to go.' We have it all right here.”

“I just like the idea that the community enjoys it,” she said.

Community enjoyment (and of course tourist attraction) is the point of the park, said Pat Follet, general manager.

“I rode it probably 30, 40 times,” said Braden Whitney, operator of El Rancho Motel, which sits right across the street from the Canyon Coaster.

The park already includes a bar, restaurant, tube slide and of course the coaster, but Whitney is excited for what comes next.

“They’re building mini golf and I think a ropes course next,” he said. “I love golfing, so I'll be over there playing mini golf to practice my putting.”

Aside from the anticipation of new attractions and a tighter short game, Whitney has high hopes that the Canyon Coaster Adventure Park will do for Williams what no business has done before.

“Hopefully [local businesses] won’t have to lay off so many people in the winter,” he said.

Summer travelers taper off and “The Gateway to the Grand Canyon” can struggle to make ends meet without the influx of tourist dollars. Hotels, motels and restaurants all have to cut staff. At nearby Historic Brewing, Brian Pluma reported that they have to let got two-thirds of the bottle room staff in the winter.

“We usually run with about 15 servers or front-of-house crew, but during the winter we’ll run with four,” Pluma said. “There’s just not enough business.”

Among the working people of Williams, an optimistic eye is turned to Canyon Coaster Adventure Park. With wintertime attractions such as a snowplay and tubing hill, alpine coaster, hot food and beer around the fire pit, the park seems positioned to be the missing piece that Williams needs.

“We’ll have thousands of people, especially in winter,” Follet said. “Economically, it’s going to be a huge boost. It’ll add one more day to somebody’s stay when they visit town.”

Follet has reason to be confident. Two of the park owners — Bruce and Kim Voigt — have successfully created similar attractions in Big Bear, California. They own the Alpine Slide at Magic Mountain as well as Big Bear Snowplay. For their contributions to the community, the Voigts were awarded the 2018 Big Bear Chamber of Commerce Summit Award.

Follet expects that the adventure park will receive “overflow” from wintertime tourists in Flagstaff as well attract guests of its own. For those passing through Williams, the park is hard to miss. Its placement on the western edge of town means that anyone getting on Interstate 40 to Flagstaff will have to pass by the intrigue of its coiling coaster rails.

That was enough to stop Mike and Shannon Alban from north Florida.

“We were just passing through on our way to Yellowstone and the Grand Canyon,” Mike said while he and his wife trotted up to the entrance. “Saw it on the side of the road.”

“I’m surprised we haven’t had more wrecks out there,” joked Follet. “People just slow down and stop when they see the coaster.”

The park’s capacity as a roadside attraction will also be augmented in winter, when, Follet said, they will be making snow for the tubing hill.

“You're going to see this big white dot from the freeway,” Follet said. “Snow is like a magnet for people.”

Follet is hoping for a boom over Memorial Day.

“We had really good numbers last weekend,” he said, but there’s been an “absolutely huge” amount of money invested into building the park.

There’s still a lot of ground to make up.

For Follet, the park’s 50 employees and the workers in Williams hoping to hold winter jobs, the suspense is real. The Canyon Coaster Adventure Park has taken on a weight in the Williams community, and already people are looking to it as the stabilizing leg in what Follet calls “the trifecta” of local attractions.

“You’ve got Bearizona, Grand Canyon Railway and now us,” Follet said. “That’s what we’re pinning our hopes on.”

Sean Golightly can be reached at sgolightly@azdailysun.com.
0 Comments

Bald eagle gets a lift from utility crews in Flagstaff

Twelve years ago, a handful residents in the Timberline neighborhood east of Flagstaff declined to grant Coconino County the easements required for the completion of flood mitigation projects. Now, current residents are bearing the consequences.

Monsoon rains that dropped onto the Pipeline Fire burn scar flooded multiple areas in and around Flagstaff on Sunday. These floods were not wi…

The City of Flagstaff, Coconino County and the Coconino National Forest lifted fire restrictions Tuesday due to “significant precipitation” th…

The 26,000-acre Pipeline Fire burned across multiple watersheds within the San Francisco Peaks, escalating the threat of post-fire flooding fo…

6 p.m. update: According to the daily numbers from the National Weather Service, Flagstaff received 0.11 inches of rain at the Flagstaff Airpo…

An apparent murder-suicide claimed two lives and left a third person with multiple gunshot wounds on Wednesday night in Flagstaff.

As an early monsoon season settles in, flood mitigation projects downstream of the Museum Fire burn scar are nearing completion -- not a day t…

Unbelievable! This is the moment a cobra vomits up a massive PVC pipe

Unbelievable! This is the moment a cobra vomits up a massive PVC pipe

This car-bike hybrid could be the future of city travel

This car-bike hybrid could be the future of city travel 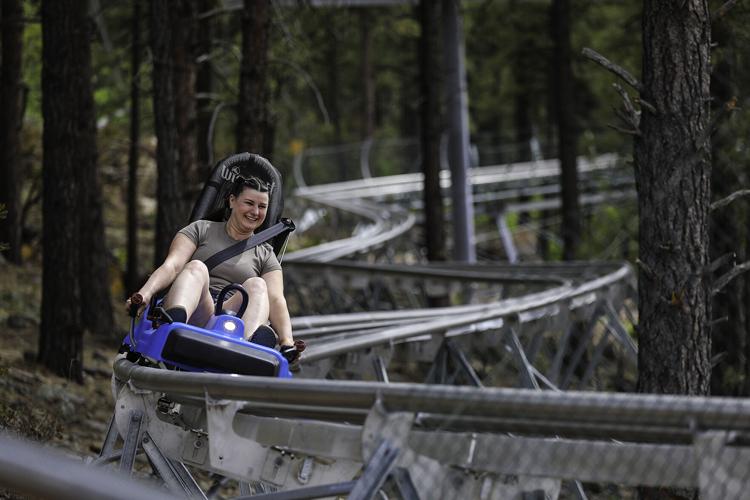 Paige Montoya pushes her brake handles all the way forward to slide full throttle down the rail of Williams' new Canyon Coaster at the Canyon Coaster Adventure Park Thursday afternoon. The park boasts Arizona's first alpine slide style coaster as well as a summer and winter tubing hill. For more photos and a video of the coaster, visit azdailysun.com.

Canyon Coaster Adventure Park employee Robyn Bagby gives Kelly Anderson instructions on how to use her sled Thursday afternoon as she prepares to take a ride on the new alpine slide style coaster in Williams. The park also offers summer and winter tubing, with plans to install miniature golf and a ropes course.

Four summer and winter tubing runs are ready for use Thursday morning at the Canyon Coaster Adventure Park in Williams. The business plans to offer 10 runs total eventually and will provide the community with a sledding alternative in the winter because the company will be able to make snow for the hill.

The Canyon Coaster Adventure Park is open for business Thursday afternoon in Williams. The park boasts an alpine slide style coaster, a summer/winter tubing hill, a cafeteria and a bar, with plans to install miniature golf and a ropes course.