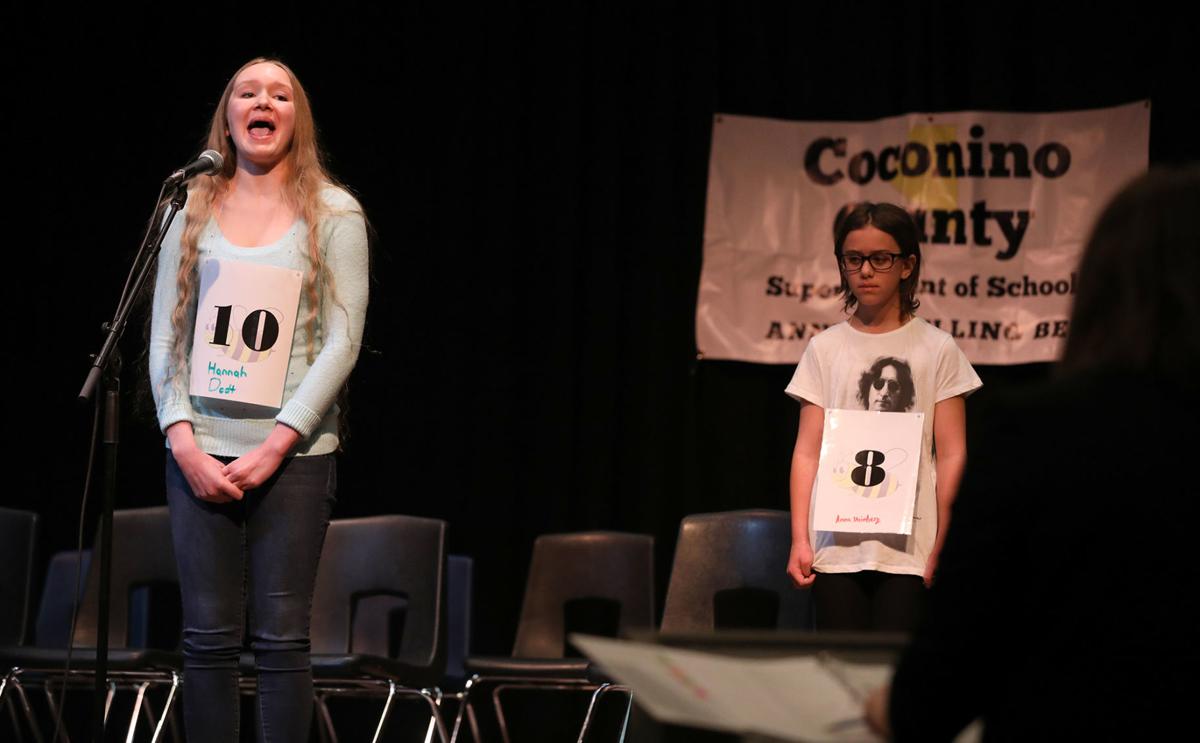 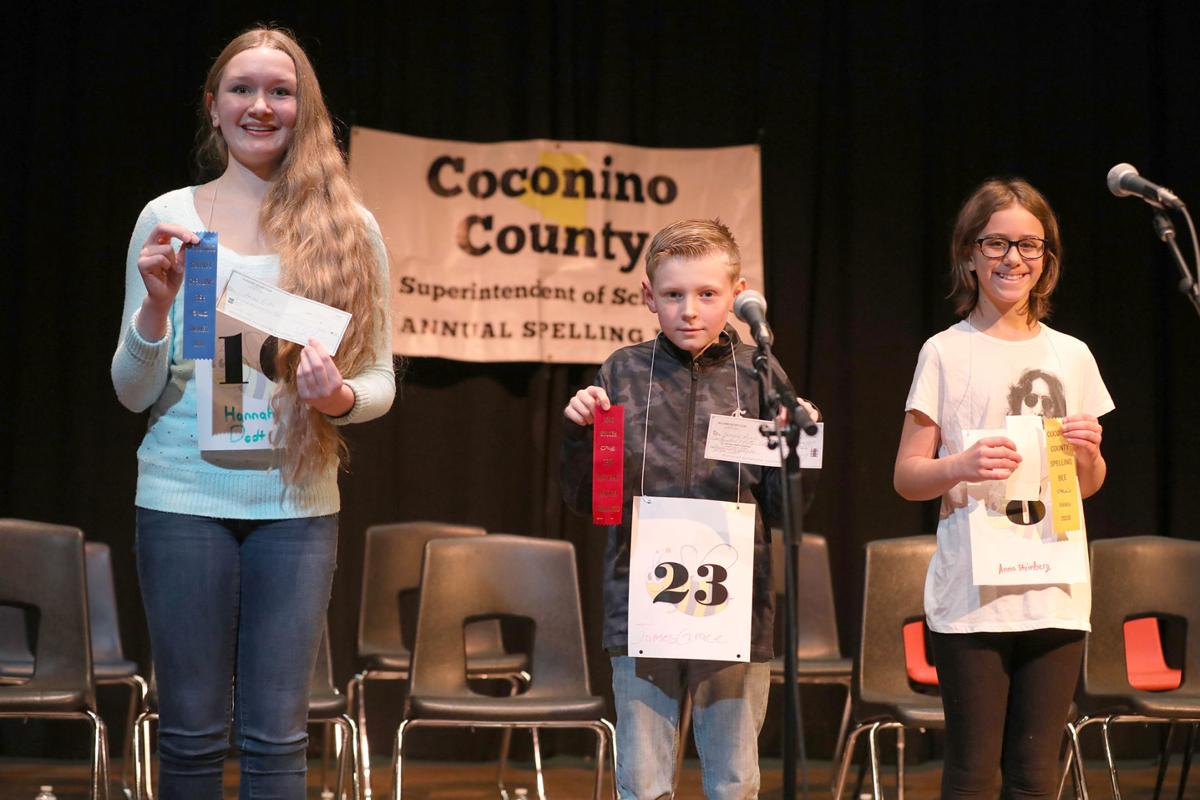 From left to right Hannah Dodt, 13 (left), James Grace, 9 (middle), and Anna Steinberg, 8, stand with their checks and winning ribbons after the Coconino County Spelling Bee in this Feb. 2020 file photo.

A list of 4,000 new words did not scare 13-year-old Hannah Dodt, the 2020 Coconino County Spelling Bee champion, who won the regional competition for the second year in a row.

Hannah, an eighth grader at Flagstaff Home Educators, a local home school program, said the previous word list provided by the Scripps National Spelling Bee had been nearly the same for as long as a decade.

“That made it a bit more challenging this year, but it was a lot of fun,” said Hannah, who secured the title Saturday morning at Coconino High School with “mantra.” Last year, her winning word was “potash.” When she went to the state bee last year, she finished in the top 12.

Such winning streaks seem to run in the family. This weekend’s bee marked the Dodt family’s 16th; Hannah’s participation in the state bee next month will add one more.

Her brother, Tanner, 15, who is now a sophomore, won the Yavapai County bee three years in a row starting in 2015. During the 2017 state bee, when he was a seventh grader, he took second place, just as he did the following year in the Coconino County spelling bee.

“It’s nerve-wracking,” he said of watching his sister compete. “I’m still nervous for her.”

A total of 23 third through eighth grade students from home, public, charter and private schools from throughout the County participated. Each qualified by winning their school or district spelling bee.

Though the winners, like most of the students during the competition, nervously clutched their hands together or tugged on the fabric of their clothes as they spelled, afterwards, the three were all smiles, cheeks flushed from compliments as they held their ribbons and prizes — checks for $250, $150 and $100 donated by the Rotary Clubs from Flagstaff, Grand Canyon and Williams.

Though Anna said she was still determining how she would use her prize money (she’s considering a puppy or a trip to see The Ellen DeGeneres Show in person), James and Hannah knew exactly where these funds would go: to a new pair of Vans shoes for James and straight to Hannah’s college fund. She hopes to attend a ballet school in New York.

This year, competitors triumphed over words like “organza” and “ragamuffin,” even as they tentatively ended some of their perfect recitations like questions, with both their pitch and eyebrows raised. When misplacing a vowel or omitting a letter like in “epigram” and “fuddy-duddy,” though, they heard the dreaded judges’ bell.

Every time Hannah approached the microphone, she would ask for the word’s definition to rule out any homonyms, then confidently recite the word’s spelling with an even rhythm. When the judges remained silent, she released a wide grin.

Repeatedly typing out the words on the Scripps list helped her learn the words.

“Every time I would have any extra time, all I would do is just practice,” Hannah said. “I really wanted to be prepared for this.”

Hannah will compete in the Arizona Educational Foundation State Spelling Bee on March 21 in Phoenix. The winner of the state bee will represent Arizona at the 2020 Scripps National Spelling Bee in Washington, D.C. in May.

WH turns focus to getting Under 30 vaccinated

WH turns focus to getting Under 30 vaccinated

This year, the Mountain Spelling Bee winner was perfect.

After nearly 60 rounds of back and forth for over an hour between the two finalists, it came down to one word with Latin roots meaning "huge" …

From left to right Hannah Dodt, 13 (left), James Grace, 9 (middle), and Anna Steinberg, 8, stand with their checks and winning ribbons after the Coconino County Spelling Bee in this Feb. 2020 file photo.