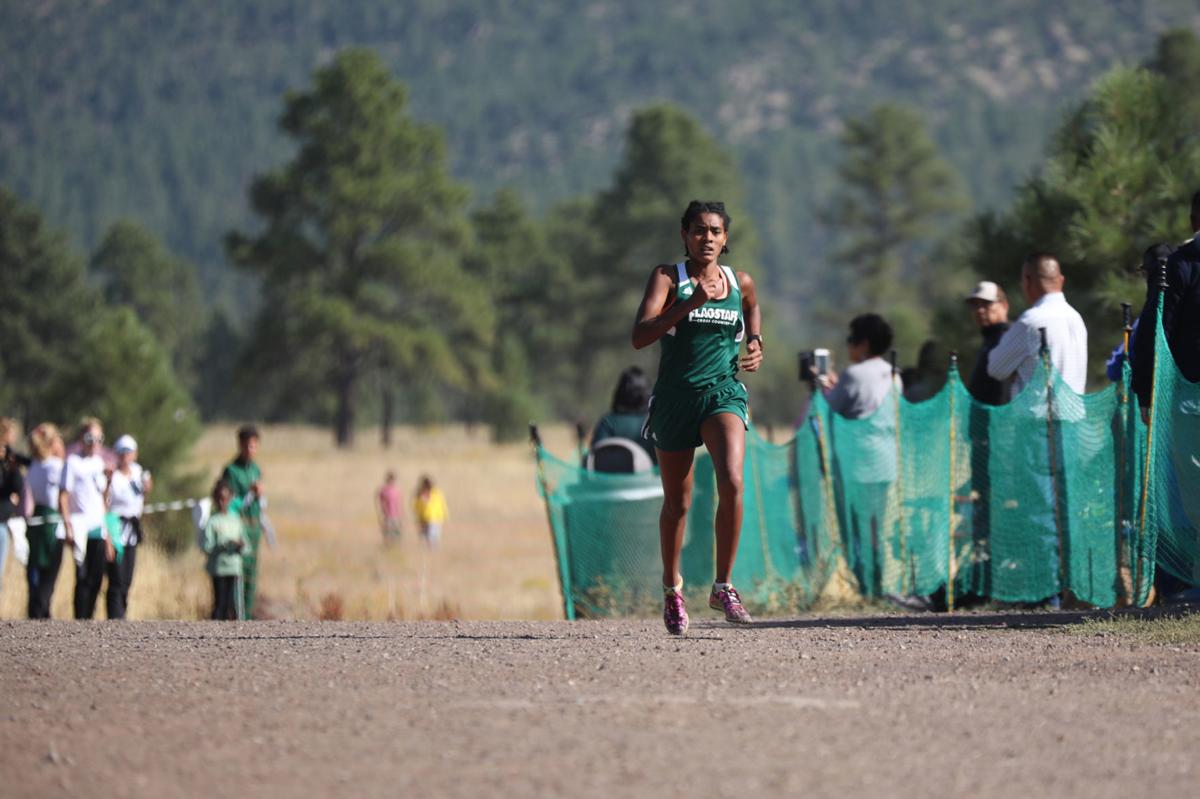 Flagstaff’s Hana Hall prepares to cross the finish line of the Four Corners cross country meet without another runner within sight this season at Buffalo Park. 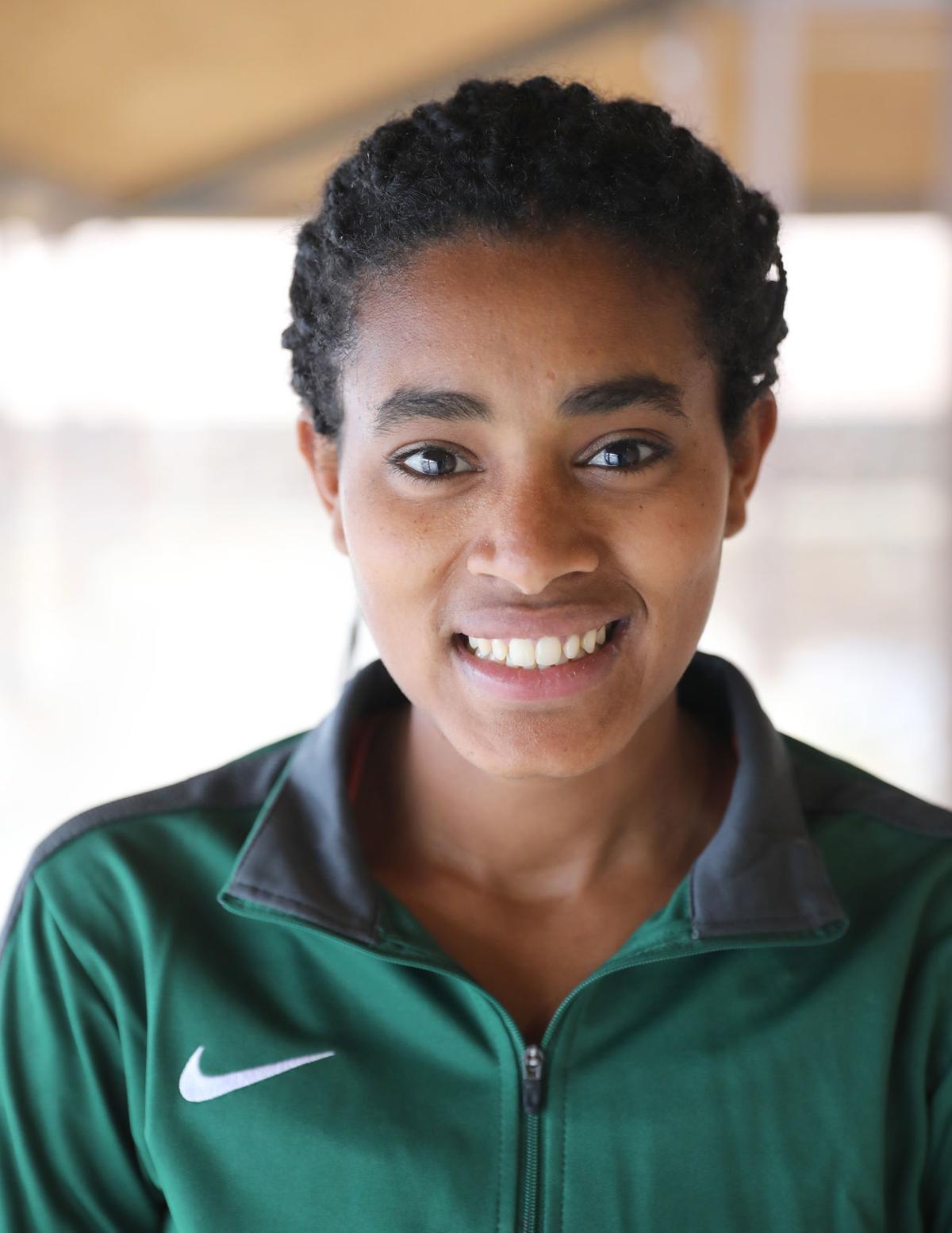 Flagstaff High School’s Hana Hall has been named as the 2019 Arizona Daily Sun Girls Cross Country Athlete of the Year.

Hana Hall is normally found at meets racing alone as the leader of the field. During those miles and minutes of being out front, she still always had lots of support surrounding her.

Her support system, made up mainly of her parents, coaches and teammates, helped her continue to push her boundaries and maintain a champion's mentality. Hall finished her second and final season with the Flagstaff Eagles as a repeat individual state champ and as a key cog of the Division II program's fifth straight team title.

For her stellar season, and ability to lead a team full of talent and title aspirations, Hall has been named the 2019 Arizona Daily Sun Girls Cross Country Athlete of the Year.

“I definitely got better this season than last," said Hall, who won this year's state individual title on a time of 18:15.13.

The Flagstaff girls, for the second time in program history, won a fifth straight crown. The Eagles topped the state with 53 points and a team time of 1:38:14. Hall's younger sister, Flagstaff freshman Mia, came in third.

With the elder sister leading the way, the sisters often went 1-2 at races, including the sectional meet that Flagstaff won this season.

Hall brought most of the varsity experience on the team, as junior Allie Thurgood, who took sixth at the state meet at the Cave Creek Golf Course, was in her first season running cross country. Senior Anna Harmon finished 18th for the Eagles, with sophomore Breana Biggambler and freshman Brooke Golightly going 25th and 30th respectively.

“It’s incredible having this group of young girls in the program because they work so hard, like every day," Hall said.

Their drive to be fast pushed Hall to better as well, to lead by example by upping the work ethic and intensity during training and on race day.

Hall also learned how better work through the rough spots of racing and training. She said she had a stronger mentality this season when it came to dealing with pain, attributing her development in the area to her supporting cast -- especially her mother, Sara.

“She works really, really hard before her marathons. That kind of helps me to go through all the pain and stuff. Just have a strong mindset that you can do it," Hall said.

She also learned from her mentors, such as Eagles head coach Trina Painter, how to be at her best for race day. Hall said she learned how to eat and drink better, and how to make sure she sleeps and recovers well.

“I think that’s like the main goal for me. I didn’t know how to sleep, or eat or drink, but my parents really got me through that," Hall said.

Adding the body and fitness management to her talents led to her always being out front in races. She won five of her six races this season, and then she finished ninth in the Nike Southwest Regional Championships meet on Saturday in Casa Grande, clocking a 17:46.7 in the 5,000-meter race. The only race she didn't win during the regular-season slate was the Nike Desert Twilight meet, where she took 11th and set a 5000m PR of 17:35.6.

She admitted it's not easy leading the pack in most races, but she was always good at executing the kind of race she wanted to run.

“You never know who’s coming up, but I just kinda go for it. I know my pace that I can hold throughout the race," Hall said. "But it’s challenging because there are some really good girls racing and sometimes racing out front works or it doesn’t, you just have to plan and go for it.”

She'll soon get a new taste of stronger competition as she is set to run for Grand Canyon University.

She said she liked the coach, environment and the fact that GCU is close to home. She added that she thinks it's the best place for her to be the strongest, fastest runner she can be.

“I want to improve a lot, I really want to be the best I can be," Hall said.

Even though she's graduating, she'll still have with her the support that made her champ two years as a Flagstaff Eagle.

Flagstaff’s Hana Hall prepares to cross the finish line of the Four Corners cross country meet without another runner within sight this season at Buffalo Park.

Flagstaff High School’s Hana Hall has been named as the 2019 Arizona Daily Sun Girls Cross Country Athlete of the Year.