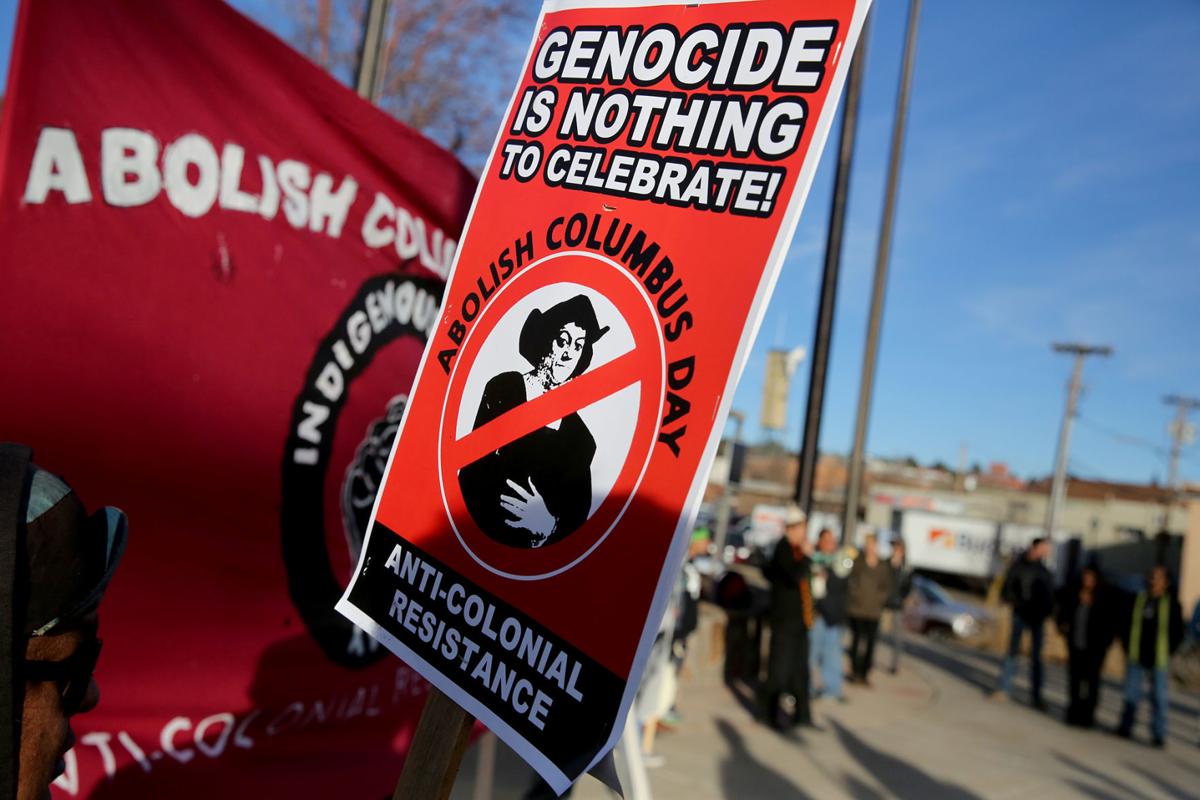 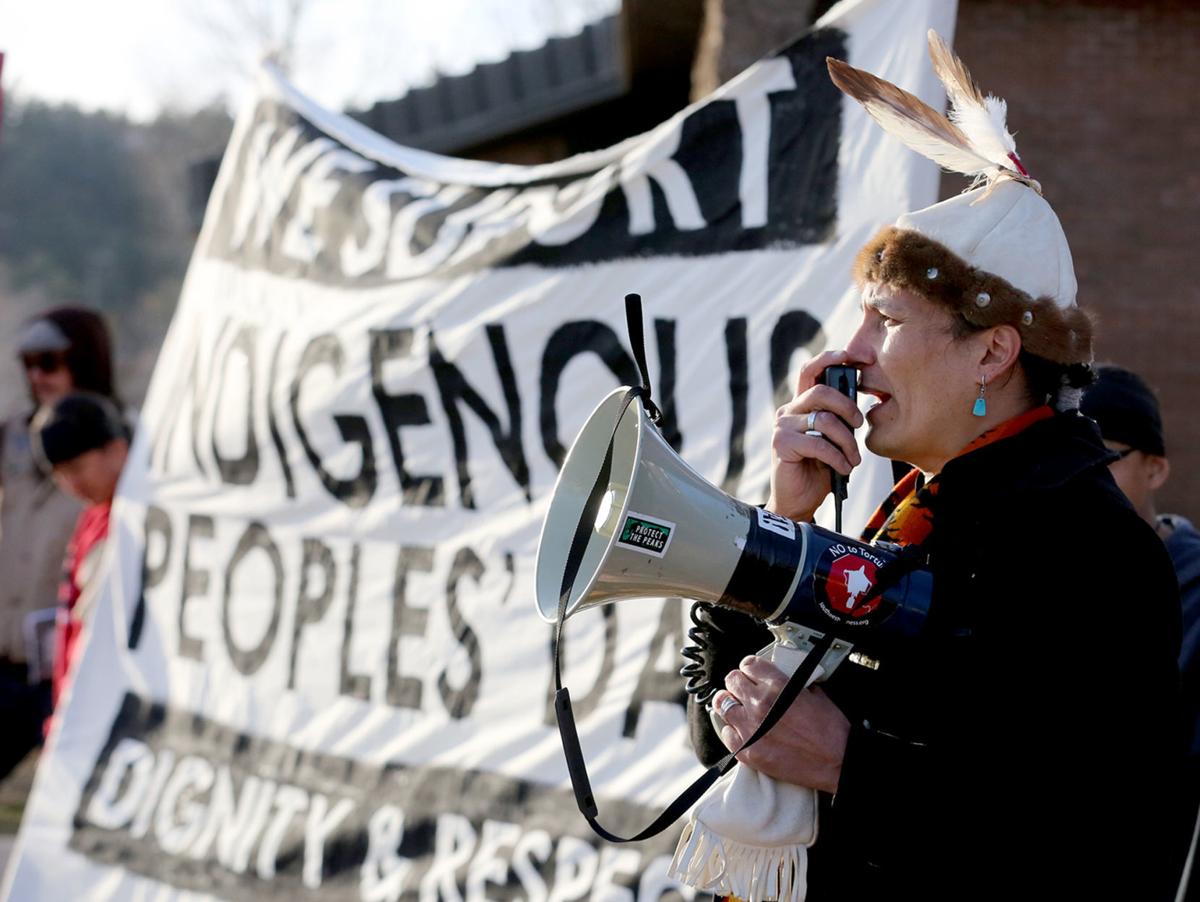 Klee Benally leads a protest in support of Indigenous Peoples Day in front of Flagstaff City Hall. Benally spoke before the Flagstaff City Council calling for them to replace Columbus Day.

Supporters of an Indigenous Peoples Day are one step closer to seeing it become a reality in Flagstaff.

The Flagstaff City Council unanimously directed staff Tuesday to move forward with a plan that could see the city recognize the second Monday in October as Indigenous Peoples Day. The city would not replace Columbus Day, which falls on the same day, but would encourage people to celebrate their Native American neighbors.

Councilmember Eva Putzova requested the item in October. Her three-step plan first requires staff to examine and report on how well the city is implementing the memorandum of understanding between the city and the Navajo Nation Human Rights Commission.

Then the city would hold multiple town hall meetings with the public, the city and the city’s Native American neighbors to discuss the city’s relationship with the nearby tribes.

Once those two steps were complete, then the city would consider designating an “Indigenous Peoples Day.”

More than 100 supporters of the holiday packed the Council chambers Tuesday to advocate for the day. Many of them talked about how their family members and friends have experienced racism by law enforcement and business owners in the Flagstaff area. They asked Council to consider moving to the “right side of history” by endorsing Indigenous Peoples Day.

Daisy Purdy, a Northern Arizona University faculty member and student, read a petition signed by more than 230 residents in support of the day. It called on the city to “honor indigenous histories, respect indigenous contemporary holistic wellbeing and work diligently for the benefit of future generations of indigenous peoples.”

Joe Washington, a former city councilmember, asked, “Why wouldn’t Council be for Indigenous Peoples Day or a dialogue on it? I can’t imagine why Council would be against it.”

One student who is Navajo stood before Council and asked if they had ever been stared at or called names while walking down the halls of their high schools because of the way they dress, their long hair or the jewelry they wear.

He said he was afraid of being stopped by police on the way home from school because of the way he dressed and he felt disgraced because the mountain his people worshipped was covered in “yellow snow.”

Jamie Yazzi, an NAU grad student, said she constantly has to fight for appropriate representation of her people on the streets and in the classroom.

“I often do not feel safe or welcome here in Flagstaff because I am Navajo,” she said.

Recognizing Indigenous Peoples Day was a perfect way to recognize the relation between the tribes and the city and was the first step in dismantling the symbols of colonization, she said.

Lyncia Begay said, “Indigenous Peoples Day is a step toward acknowledgement, acceptance and healing within our community.”

Councilmember Coral Evans compared the city recognizing Indigenous Peoples Day to the removal of the Confederate flag from the state capitol building in South Carolina.

“Nikki Haley, the governor of South Carolina, said on June 22, 2015, ‘This is a moment in which we could say that flag, while an integral part of our past, does not represent the future of our great state,’” she said. “I think the same can and should be said of Columbus Day. I think that Columbus, while an integral part of our past, our country’s history that should never be forgotten lest it be repeated. Columbus Day in my mind does not and should not represent the future of this country, much less this city, therefore, I support the establishment of Indigenous Peoples Day here in Flagstaff.”

Evans also asked staff to consider seeking out the other local tribes and adding them to the memorandum of understanding.

“Conversations about race, racism and traditions are never easy, but that does not mean it should be avoided,” she said.

Staff will return to Council in the coming months with a more detailed report on the memorandum with the Navajo Human Rights Committee and dates for the town hall meetings.

Senior royals walk in the Duke of Edinburgh's funeral procession

Senior royals walk in the Duke of Edinburgh's funeral procession

Rep. Walt Blackman, R-Ariz., announced he will be seeking a seat in the U.S. House of Representatives representing Congressional District 1.

A reintroduced bill by Rep. Tom O’Halleran hopes to provide assistance to northern Arizona communities and local tribes impacted by the closur…

Klee Benally leads a protest in support of Indigenous Peoples Day in front of Flagstaff City Hall. Benally spoke before the Flagstaff City Council calling for them to replace Columbus Day.