The $73 million overpass bridge that will extend Lone Tree Road over the railroad tracks to connect with Route 66 is gaining steam as the project moves through the preliminary design phase.

“Hopefully in 2023 we will be ready for project construction,” project manager Christine Cameron told the Flagstaff City Council during a presentation last week.

The presentation provided the council with an update on the project, offering a first look at how the north-south roadway might function when it is completed.

Preliminary designs for the overpass feature two automobile travel lanes in each direction, connections to pre-existing urban trails and protected bikeways on either side of the bridge. The project looks to reduce traffic congestion across many of the city’s major corridors, city officials said.

But the council was not entirely sold on the current iteration of the plan, raising concern with the overall impact on Flagstaff’s climate action goals and the citywide effort to enhance multimodal transportation.

“There’s a lot of apprehension with the way in which we grow and the mindfulness in which we do it,” Councilmember Austin Aslan commented.

Aslan was concerned with the scale of the project, stating that he felt it was “too big” and “too focused on cars.” He advised project managers to look into reducing the size, worried that the current design may serve to facilitate an increase in traffic.

“I see a way for us to move forward with a project that proclaims our community values and provides needed relief from congestion for traffic at the same time,” Aslan said. “So be bold, think in new ways, be innovative.”

The current phase of the project comes after nearly two decades of consideration, and will serve not only to reduce congestion, but also to enhance regional mobility and increase safety, according to city officials.

In 2001, the City of Flagstaff’s Regional Land Use and Transportation Plan revealed the need for an additional north-south connection near the downtown Flagstaff area. The city subsequently began studying the concept of the corridor in the mid-2000s.

The project was solidified by voters more than a decade later, when the city secured a $73 million bond for the Lone Tree overpass from a voter-approved proposition in the 2018 election.

Because the funding was approved by the Flagstaff electorate, the council does not have the option to pump the brakes on the project. Councilmember Regina Salas reminded the council that the project was supported by voters at Tuesday’s meeting.

“This is a part of the Lone Tree Corridor that was approved by Flagstaff voters in 2018 and the Lone Tree overpass is the masterpiece,” Salas said. “It benefits Flagstaff and the entire region. It will provide less congestion to downtown, access to future growth areas, improve pedestrian and bicycle mobility and offers more effective evacuation routes.”

Not everyone was as optimistic. Councilmember Adam Shimoni shared concerns with Aslan that the project was too focused on accommodating cars, and asked for improvements to be made to the bike and pedestrian infrastructure.

Shimoni was concerned that the design of the intersections in particular prioritized the movement of cars. One of the proposed intersection concepts at Butler Avenue and Lone Tree Road included multiple dedicated turn lanes, amounting to seven total traffic lanes on the northern and eastern roadway sections.

“As councilmember Aslan spoke to, I have the same concerns that by 2040 we are going to find ourselves back at the same issue, yet with seven lane intersections,” Shimoni said. “So I do have concerns with some of the underlying principles and values with which this project was designed.”

“If we are going to achieve our carbon goals, and if we are going to design for a more enjoyable place to live, it has to be enjoyable to walk and bike,” Daggett said. “Anything that we put in the path of someone choosing another option in terms of transportation, I think we are missing an opportunity to create what we said that we value.”

During the discussion, design manager Jason Carloftis presented traffic projections to the council from 2026 to 2040. He said a traffic study with the addition of the overpass showed significant traffic reductions to Milton Road, Beaver Street and San Francisco Street.

Councilmember Jim McCarthy asked if the traffic reductions also applied to Milton Road south of Butler Avenue, adding that he would like to see those projections included in future discussions.

The presentation also included data on the estimated reduction in greenhouse gas emissions, which according to city staff would come through more efficient traffic operations. The model showed more than 1,896,500 gallons of fuel reduction between 2026 and 2040, accounting for an increase in vehicle traffic.

Shimoni pointed out that the city’s recently approved Carbon Neutrality Plan calls for the number of vehicle miles traveled to remain constant from levels from 2019. He asked climate specialist Jenny Niemann for clarity on the project in regard to the city’s sustainability goals.

“We know that there are tradeoffs. We know there can be tension,” Niemann said. “I think it's really important that we all take a step back.”

Niemann said the project looks to give vehicle commuters more options, which is a significant component in reducing the dependency on cars. She noted the infrastructure that would be created for bicyclists and pedestrians.

In February, the council awarded the preliminary design phase agreement for the project to Ames Construction. With the council’s recent input, the team will now trudge forward to the final design phase.

Cameron said staff will return to the council in November with a contract to begin work on a final design. If all goes accordingly, plans will be finalized by the end of 2022 with construction beginning the following year -- putting the project on pace to be completed by 2026. 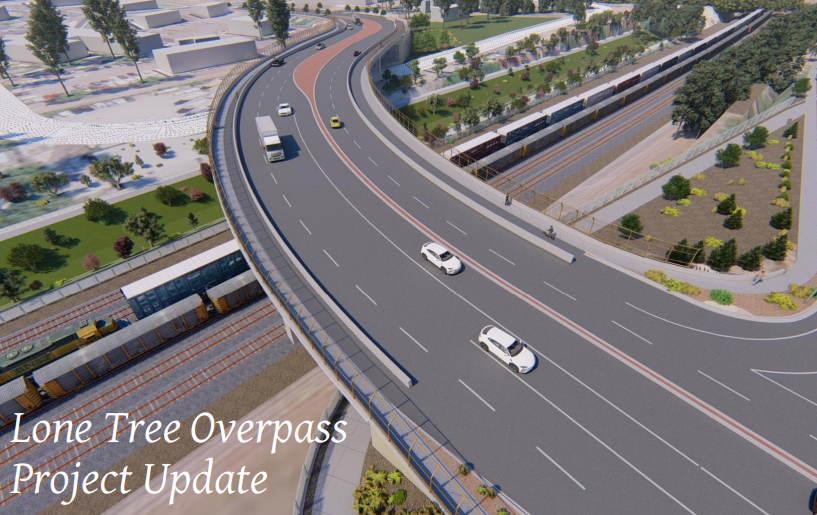 Preliminary designs for the Lone Tree overpass were presented to council this week. 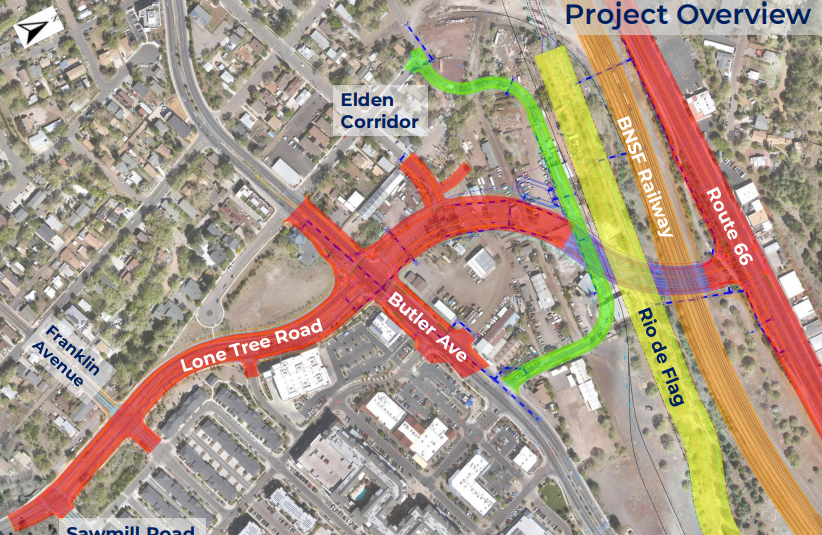 The areas that will be impacted by the Lone Tree corridor improvements. The project will include an overpass that will extend across the Rio de Flag flood control project and the BNSF railroad tracks.

The timeline for the design and construction of the Lone Tree overpass. The project is expected to be fully completed by November 2026.