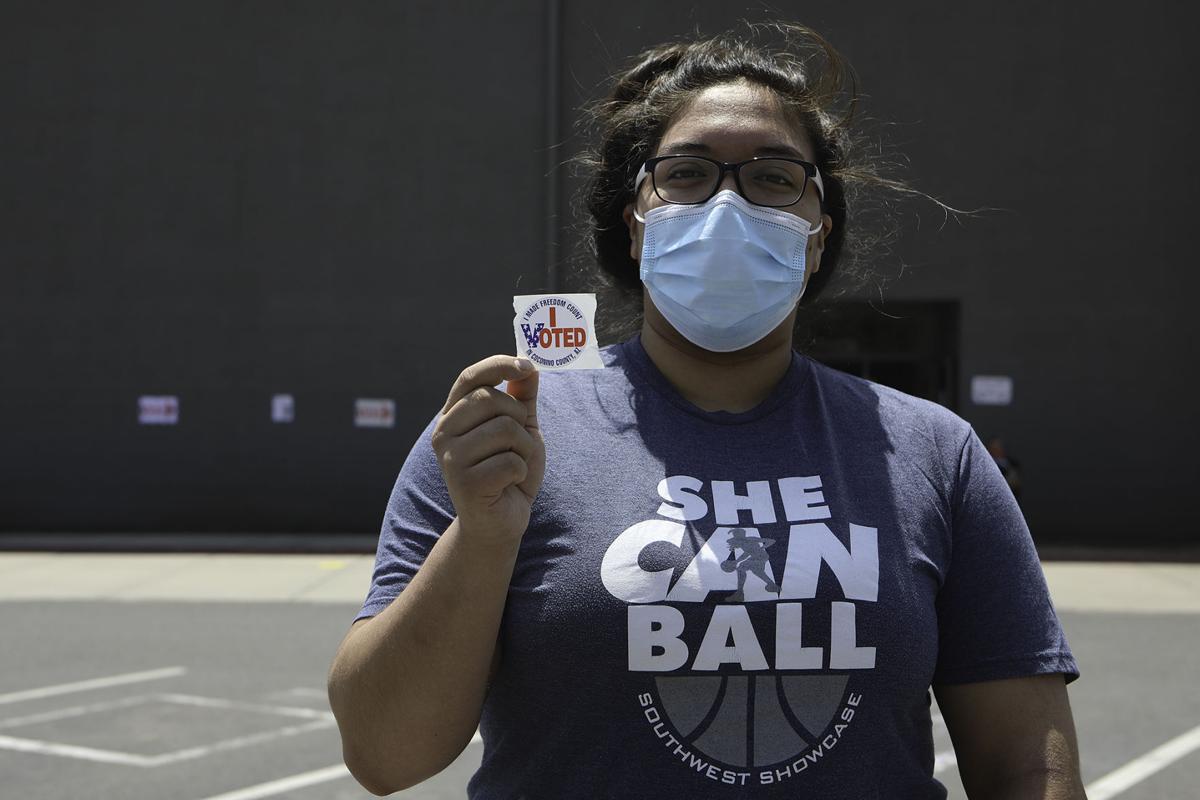 Trinity Gencarelle displays her “I voted” sticker after voting in the Flagstaff primary election at the Coconino High School location Tuesday morning. 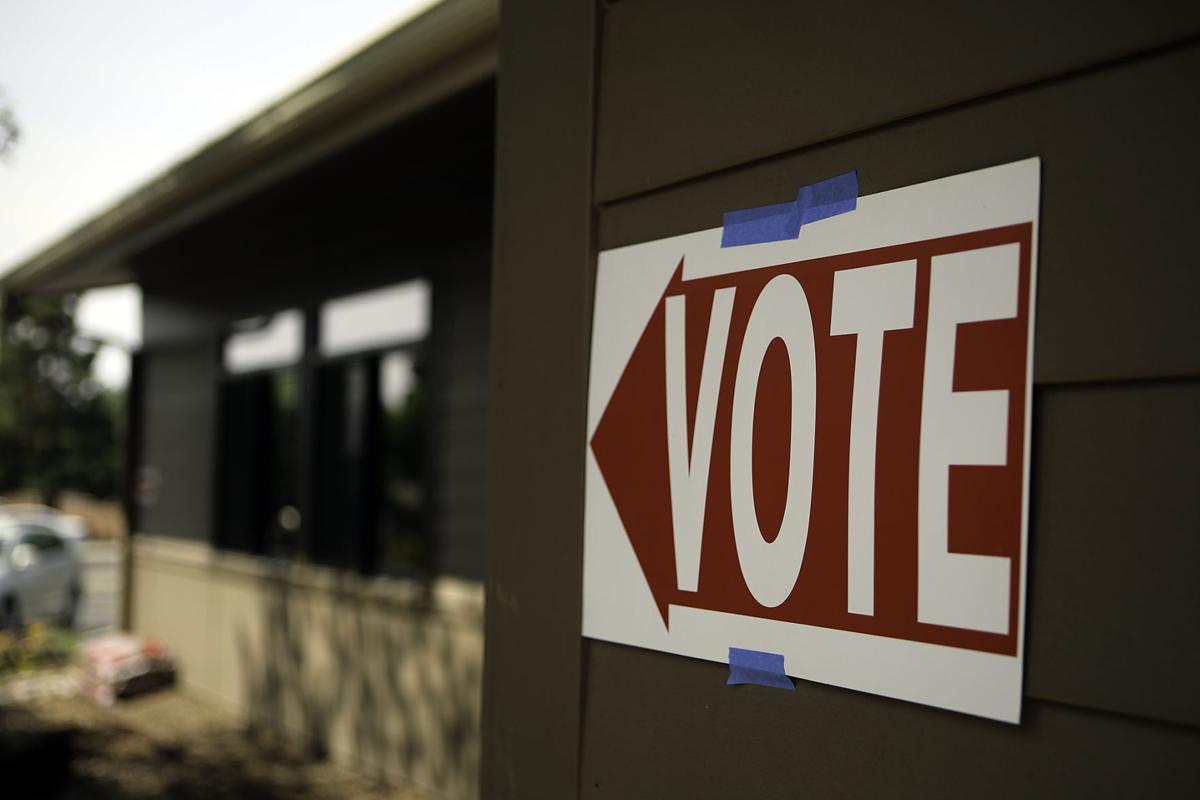 Many signs led the way to the entrance to the polling location at the Shepard of the Hills Lutheran Church on Wednesday. This was one of many polling spots in Flagstaff in which residents could either vote in the primary election in person or drop off their ballots.

Although ballots will continue to be counted throughout election night, from early results Tuesday evening, it appears that Flagstaff mayoral candidate Paul Deasy will be on the ballot in November.

Who he will be running against was less clear.

As of 9:50 p.m. on election night, with 80% of precincts reporting, Deasy had received 37% of the vote, while Councilmember Charlie Odegaard was at 32% and Councilmember Jamie Whelan was at 29%.

Overall, the county had about 30% of registered voters participate. As voter participation during a primary goes, that is fairly low for Coconino County, said County Recorder Patty Hansen. She attributed some of that to a fear of COVID, especially as the county saw much lower numbers of in-person voters.

Rodger Gee was one Flagstaff voter who decided that rather than mail his ballot, he would simply drop it off at a polling location.

“I’ve always voted in person. I live about a block from the polling place and it’s always been nice to see the community getting out and getting involved, to see the faces of my neighbors voting their choice,” Gee said.

Gee said he was also curious about how his polling place at the Shepherd of the Hills Lutheran Church would be set up given the safety concerns.

Spread out within the church’s community room, poll workers wearing masks sat behind Plexiglas sheets as they checked voters' IDs and handed them ballots to fill out.

Gee said despite his concerns for the safety of himself, his neighbors and the community as a whole, he felt safe dropping off his ballot inside.

On the other hand, Flagstaff voter Victoria Nabours chose to drop off her mail-in ballot at an outdoor drop box, specifically avoiding an indoor polling location. Nabours said because of the virus, she just wouldn’t feel comfortable going into a polling place. She doesn’t expect that feeling to change for the November election and plans to again vote using an early ballot.

Nabours said for mayor, she voted for Councilmember Jamie Whelan, in part because she likes the idea of being represented by a woman mayor. Whelan also has the experience for the job, having served on council for four years, Nabours said.

For that same reason, Nabours said she was also considering voting for Odegaard.

“They have experience, which was the big thing for me,” Nabours said.

Jill Wagner said she voted for Paul Deasy in large part because Wagner said she thinks he will stand by his convictions. On top of that, Wagner said she felt that Deasy and his campaign had done a better job reaching out and courting her vote, especially on social media, while she didn’t hear much from the other two candidates.

Jamie Campbell, whose 2-year-old daughter Adelaide slid her ballot into the downtown drop box on her behalf, said she voted for Odegaard.

“I really love what he stands for, I mean he’s like third generation Flagstaff. And we’re for the police, we’re not for defunding the police,” Campbell said, referencing Odegaard’s support for the department.

Earlier this year when some residents were pushing Flagstaff City Council to reduce police funding, Campbell said she wrote to the council supporting the department. Odegaard sent her a personal response, and Campbell said it was nice to know she had been heard.

Meanwhile, the number of voters coming through polling places on Election Day appeared to be much lower than past years, she said. When voters did turn up to polling places, it was generally to drop off mail-in ballots.

Before COVID-19 forced officials to come up with new measures to keep voters and election workers safe, another issue had been top of mind: that of election security.

In January, the office showed off new election equipment and machines meant to make cyberattacks and attempted election meddling less likely, including the creation of paper buck ups to even ballots cast via a machine.

The office also got new machines to help count votes, although Hansen said the upgrades do mean it takes much longer to count ballots, meaning some races couldn’t be immediately called.

Flagstaff voters also cast a yes vote for both propositions that appeared on the primary ballot.

Although some environmental groups and the Coconino County Democrats had encouraged residents to vote no to give the city the chance to negotiate a higher franchise fee, the proposition passed with 69% of the vote.

The renewal allows UniSource to operate within the city for another 25 years and pay a 2% franchise fee to the city.

Proposition 435 also passed with 63% of the vote. That proposition raises the amount of money the city is able to spend in a single year by $4 million. Voters have approved increasing the expenditure limit twice before, once in 1988 and again in 2006.

Several Board of Supervisor candidates ran unopposed in the primaries. Lena Fowler had a substantial lead over Marie Acothley in District 5, while in District 4, Bob Thorpe had 62% of the vote against Stan Pierce on the Republican side and Judy Begay was leading with 55% against Bryan Bates for the Democratic spot.

In other mayoral races, Bill Diak was leading Levi Tappan with 57% of the vote in Page, and Clarinda Vail had 41 votes to Craig Sanderson's 25 in Tusayan.

Get Election 2020 & Politics updates in your inbox!

Keep up on the latest in national and local politics as Election 2020 comes into focus.

Trinity Gencarelle displays her “I voted” sticker after voting in the Flagstaff primary election at the Coconino High School location Tuesday morning.

Many signs led the way to the entrance to the polling location at the Shepard of the Hills Lutheran Church on Wednesday. This was one of many polling spots in Flagstaff in which residents could either vote in the primary election in person or drop off their ballots.