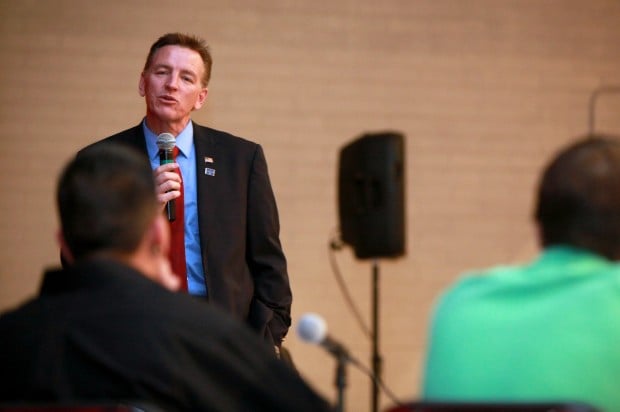 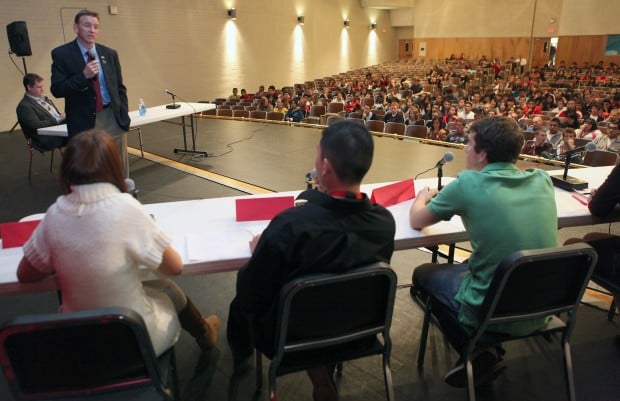 Responding to questions from a panel of students, Gosar told Coconino High School students there was no relationship between school spending and test scores, and that any money going to oversight of education at the federal level should be returned to states.

"We really have to actually look at cuts, and not just cuts in education, but all the way across the board," Gosar said, prompting one student to debate him on the need for textbooks and teacher pay.

Gosar said the community at large and businesses should step in to teach students somewhat, as an answer on how to improve education overall.

"When we throw money at education, something's not working. And so we've got to find a different way," he said, supporting competitive funding for schools that score in the top tiers academically.

For Flagstaff Unified School District, federal funding accounts for about 10 percent or 11 percent of the annual budget, on average.

Reversing some campaign statements, Gosar now says he would trim military and war spending in an attempt to balance the federal budget, but still would not cut programs like Social Security or Medicare.

Earlier this year, Gosar said he would not cut defense or veterans programs.

The students returned repeatedly to medical marijuana, and whether voter approval of an initiative making it legal for some to use was a good idea overall, helpful for the economy, or a positive for terminally ill patients.

"There are drugs that mimic the same things and act the same ways as marijuana. What this is going to be is a huge enforcement problem. But once again, just like drinking and driving, you need to have penalties when people are involved in accidents," he said.

He said marijuana had become more powerful than what was once popular, and that there were many reasons it wasn't sold over the counter.

"A lot of this is grown hydroponically, and so the drug is more concentrated. This isn't the same drug," he said.

Another student raised the possible economic benefit of partially legalizing the drug, then taxing it.

"I'm not a big tax person," Gosar said. "Governments aren't here for taxes. Government's here to provide the nimble skeleton of making sure that we're upholding laws and stuff. And so taxation I'm not a big proponent of."

Then he asked the students a question.

"Let's say that you've had some medical marijuana and you've smoked it, and you're a little bit high, and you've got in an automobile accident. How should I hold you accountable? Same as drunk driving?" he asked.

In response to another question, Gosar said he supports use of the death penatly, saying individuals must face consequences for their actions.

He also supports this year's state legislation allowing local law enforcement officers to question the residency of people they suspect of being in the United States illegally.

One student raised the Bush-era tax cuts for the wealthy, and asked whether they should be extended.

Gosar said they should, to prime spending, help small businesses, and as a matter of fairness for those who had the ingenuity or put the labor into making money.

"Why should, if I go out there and spend all my time and make $1 million, why should that be detrimental to me?" Gosar said.

He pointed to what he called burdensome requirements.

"If I do business with any one of you over $600, I have to tell the government about it. I have to fill this form out. And that's not right. That's onerous," he said.

Counter to his stance on voters partially legalizing marijuana in Arizona, Gosar opposes the requirements laid out in this year's health care legislation, which he has proposed to repeal.

"I don't ever want the government telling me that I can't do something. That's wrong," he said.

He also feels it shouldn't be up to others to pay, for example, for health consequences he would face for not following the gluten-free diet he requires, he said.

"If I don't take care of myself I suffer, but you shouldn't have to pay the bill," he said.

As an example of federal meddling, he raised a prohibition that he said would prevent individuals from paying for health care out-of-pocket in the case that they wanted a procedure or test that wasn't covered.

As an example, he gave a woman wanting a mammogram to check for breast cancer before federal agencies and her insurance company thought she needed one, and said such a patient would be prohibited from paying for it on her own.

"Most people in this district did not care for Obamacare. Since when do you feel comfortable when a bureaucrat tells you what you can and cannot do, that you cannot spend your money in your health care? That's wrong," Gosar said.

The nonpartisan Kaiser Family Foundation stated that the law does not prohibit people from paying out-of-pocket for care that is not covered by their insurance.

Certain streets in Flagstaff could be closed this summer to better accommodate business operating while following social distancing practices.