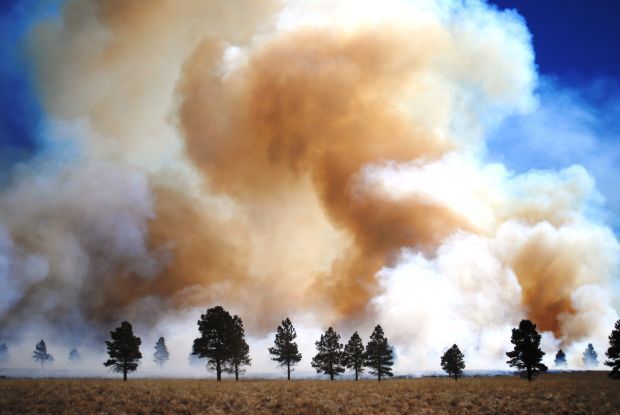 Smoke billows from a prescribed burn on the Williams Ranger District on the Kaibab National Forest. The U.S. Forest Service recently released its final environmental analysis for phase one of the Four Forest Restoration Initiative, which uses prescribed fire to help bring the forest back to its natural state. (Photo courtesy of U.S. Forest Service) 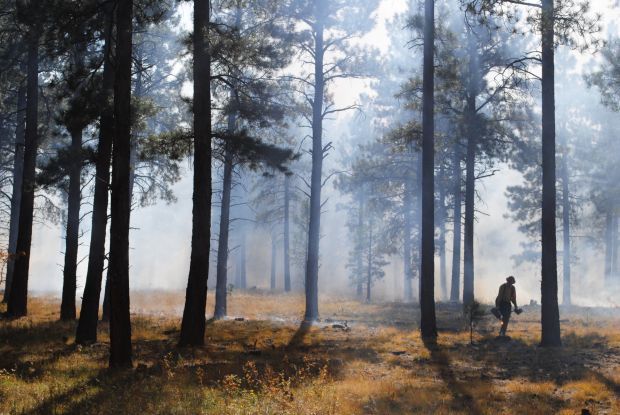 A firefighter walks through a prescribed burn in 2013 on the Williams Ranger District in the Kaibab National Forest. Prescribed fire will be a major part of the Forest Service's recently released final restoration plan for 600,000 acres under the Four Forest Restoration Initiative.

After almost four years of work, the U.S. Forest Service has released its final plan for restoration work on almost 600,000 acres of northern Arizona forests.

It is believed to be the largest single restoration project in the nation.

The Forest Service’s chosen plan of action will improve 23 percent of at-risk and 42 percent of impaired watersheds, increasing water yield. It will reduce the bark beetle hazard rating from 84 percent to 22 percent and spur aspen regeneration. This alternative will also create the most forest-related jobs and produce the least smoke emissions over the project’s 10-year timeline.

“Part of the interesting nature of collaborative processes like this is there’s a long list of things people want and in the end, if the collaboration is successful, folks usually get what they need,” said Ethan Aumack, conservation director with the Grand Canyon Trust who has worked on the project since it began. “I think we’ve reached that threshold here.”

Preservation of the forests' massive, historic trees has been a major pillar of 4FRI that was long a sticking point between the project’s stakeholders. In its final draft, instead of a rule that generally prohibits logging trees over a certain diameter, which groups like the Center for Biological Diversity pushed for, the Forest Service decided on wording that prioritizes the retention of trees over 16 inches in diameter, but provides a more flexible framework for deciding how, when and why those trees should be cut,  Aumack said. Even the Center for Biological Diversity described the Forest Service’s strategy as encouraging and a step in the right direction.

“The staff on the Coconino and Kaibab (forests) deserve a lot of credit for hearing our comments and concerns, taking them seriously and doing their best to address them,” co-founder Todd Schulke said.

Schulke also emphasized that the Center still has issues with the Forest Service’s plans to monitor the effects of fire and thinning on the threatened Mexican spotted owl. Too few monitoring locations and a monitoring plan that lacks specificity make the plan inadequate, Schulke said.

In addition to an owl monitoring plan, the Forest Service’s environmental decision require more precise thinning and lower severity fire in active owl habitat in order to comply with the official recovery plan for the species. It would also prioritize the canopy cover and large trees over 550,000 acres of northern goshawk habitat.

With such a complex process, the Forest Service will allocate $400,000 toward monitoring impacts on everything from sensitive plants to grazing sites, agency officials said.

The project isn't meant to only benefit Good Earth Power AZ, the subsidiary of Oman-based Good Earth Power that was awarded the 300,000-acre 4FRI Phase 1 contract last year. With hundreds of thousands of acres approved for thinning, the Forest Service is telling local logging companies it will be putting more contracts up for bid, but some in the industry remain skeptical.

“All I have is hope that the Forest Service will open up more acres,” said James Perkins of Perkins Timber Harvesting. It wasn’t the intention of 4FRI to put other loggers out of business, but Perkins said that fear runs through his head.

“We're kind of on the outside looking in and we're wondering if we're going to be here in a year or six months,” he said.

While the Forest Service's environmental review process was a major hurdle for the Four Forest Restoration Initiative, the pace of work on the ground ultimately depends on how logging companies carry out the contracts. Good Earth Power AZ holds the largest contract under the first phase of 4FRI project. The company brought on the timberland management firm Campbell Global to oversee thinning and forest restoration work locally, but has so far been slow to get its operations moving beyond a crawl.

Good Earth Power AZ, which oversees Arizona operations for Oman-based Good Earth Power, was awarded the 300,000-acre phase one 4FRI contract last year. But so far, of the 32,000 acres in task orders assigned to the company, it has actually harvested only 3,042 acres.

Good Earth Power AZ is still developing markets for the forest products it harvests from the 4FRI project area, said Lori Martinek, the company’s public affairs officer. Under the Forest Service contract, the company must remove the larger and more valuable logs, but also the small trees, slash and other biomass from the forest. Good Earth hasn’t yet released details about how it is plans to make this forest restoration work economically sustainable. Right now, the company is trucking logs to Lumberjack Mill in Heber, which it acquired in January, and is shipping biomass on the east side of the project to NOVO Power in Snowflake, Martinek said.

“Keep in mind that there was no real forest industry in place when GEPAZ took over the 4FRI contract and that we had to begin developing one, at the same time that work was expected to begin in the forests,” she wrote in an email.

In addition to its environmental impact statement, which analyzed 4FRI’s impact on a total of 1 million acres, the Forest Service published a formal decision about how prescribed fire, thinning work and watershed restoration should happen across the landscape.

The decision is largely similar to the preferred alternative outlined in the draft environmental impact statement the agency published in March 2013.

This final decision and analysis, once it goes through a formal protest period, will allow 4FRI’s restoration work to finally kick into first gear by creating a broad swath of environmentally approved land stretching across the Kaibab and Coconino national forests.

It will be the largest site-specific environmental analysis in the agency’s history.

Smoke billows from a prescribed burn on the Williams Ranger District on the Kaibab National Forest. The U.S. Forest Service recently released its final environmental analysis for phase one of the Four Forest Restoration Initiative, which uses prescribed fire to help bring the forest back to its natural state. (Photo courtesy of U.S. Forest Service)

A firefighter walks through a prescribed burn in 2013 on the Williams Ranger District in the Kaibab National Forest. Prescribed fire will be a major part of the Forest Service's recently released final restoration plan for 600,000 acres under the Four Forest Restoration Initiative.