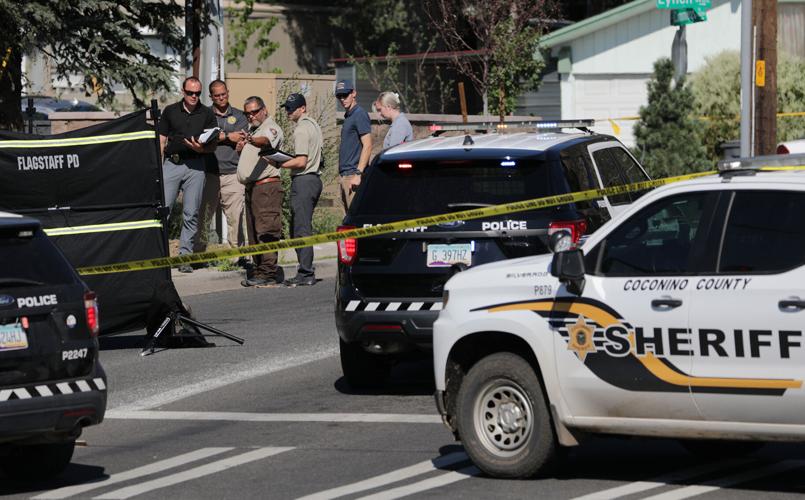 Investigators from the Coconino County Sheriff’s Office talk with a detective from the Flagstaff Police Department near the body of a man killed during an officer-involved shooting earlier this month at the corner of Cummings Street and Highway 89 across from the Flagstaff Mall. 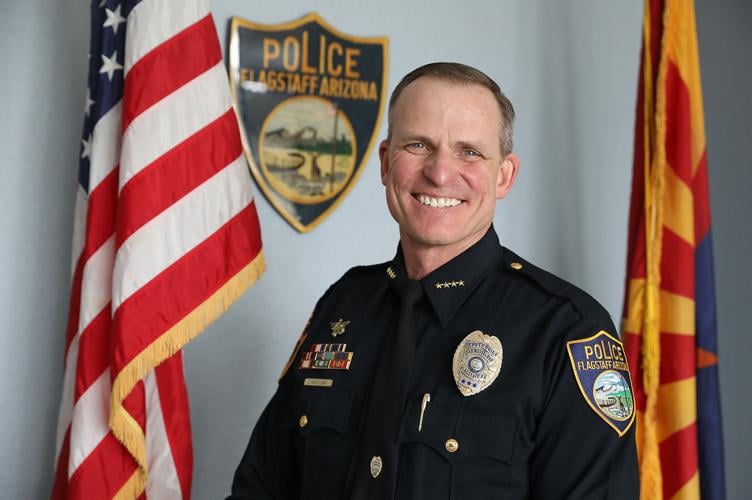 Donald Wayne Henry, a 51-year old Missouri man, was killed in an officer-involved shooting in Flagstaff on Wednesday, September 7. The investigation into the incident is still ongoing, but it took police less than 24 hours to release body camera footage and a press release about what happened.

The footage takes viewers to the corner of North Cummings Street and Highway 89, where a Verizon store sits across the street from a gas station. The clips show Flagstaff police officers and Coconino County Sheriff’s Office deputies interacting with Henry near the gas station, giving verbal commands. The footage captures the moment when Henry appears to run directly at a deputy, and the officer uses deadly force.

Flagstaff Police Chief Dan Musselman explained the decision to release video captured by officer’s body cameras. “On matters like this, where the public is interested in what happened, I think it’s good to release it as quickly as possible,” he said. “Describing what happened in a statement doesn’t always fully capture the circumstances.”

The public can view the body camera footage and make their own judgments, but the officials conducting the internal investigation are focused on a few specific things, Musselman said. They’ll be examining whether or not the officer followed department policy, and whether or not that policy is appropriate.

“Even if there weren’t policy violations at the end of the day, is there something we could have done better or different that may have affected the outcome?" Musselman said. "In addition to the internal investigation, usually there’s a criminal investigation or an overall review investigation. That’s in this case, that’s what the police department is doing, we’ll forward that to the county attorney."

After an incident like this one, which the chief calls “high liability, low frequency,” officers are typically placed on administrative leave for the duration of the internal investigation.

During that time, they might need to lean on support systems.

“It used to be taboo, reaching out for help, but not so much anymore. We understand that officers are people too, with dads, brothers, sisters, moms, and we need help as well when we see bad things,” Musselman said. “Family support is huge after an officer has been involved in a critical incident, as well as peer support. Usually, they’ll get checked on quite a bit by their supervisors their coworkers.”

Flagstaff Police Department has chaplains available to officers seeking spiritual guidance, all of whom have been on ridealongs with officers, but there is also a psychologist available to them, as well as a critical incident stress management team.

The Daily Sun will continue to follow this investigation as more information comes available.

What’s going on with University Drive in Flagstaff?

A street realignment, a roundabout, a pedestrian underpass and a 1,200-bed student housing development — all this has been promised in a plan …

The Downtown Business Alliance calls it Slack Friday — an anti-Black Friday retail tradition that is 4 years in the making. The concept is simple: take it easy and shop local.

Outdoors: The Bass Trails: The original highway across the Grand Canyon

One 120 years ago in 1902, Francois Matthes arrived at the south rim of the Grand Canyon to begin three years of topographic surveys that prod…

Thanksgiving is perhaps the biggest “food holiday” in the United States, and as every culinarian who has ever peeled a potato knows, that mean…

Investigators from the Coconino County Sheriff’s Office talk with a detective from the Flagstaff Police Department near the body of a man killed during an officer-involved shooting earlier this month at the corner of Cummings Street and Highway 89 across from the Flagstaff Mall.