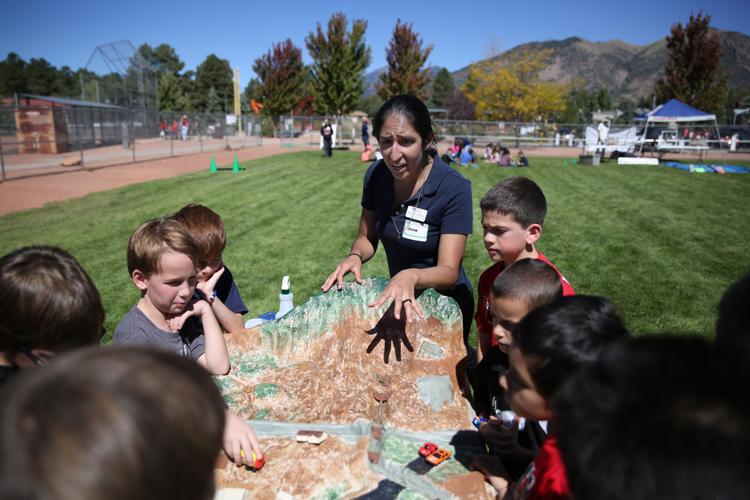 Jenna Escobedo, a student teacher from the College of Education at Northern Arizona University, explains how watersheds work to fourth grade students during a water festival at Foxglenn Park Thursday morning. 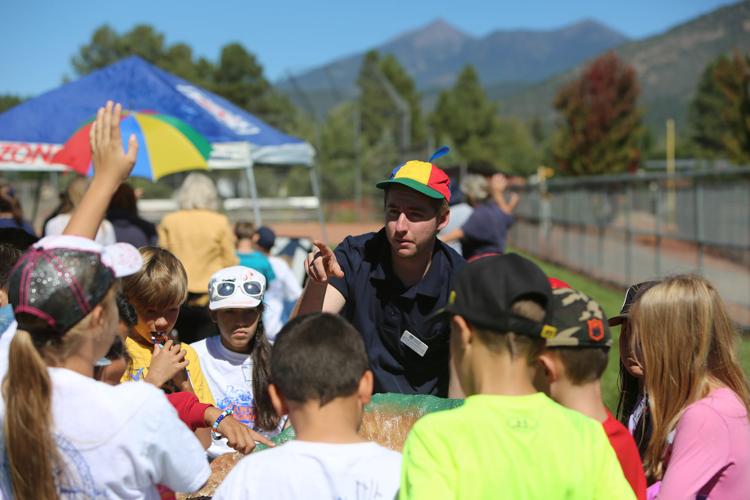 Jacob Goodenough, a student teacher from the college of education at Northern Arizona University, takes a question from a fourth grade student Thursday morning during the annual fourth grade waterfest sponsored by his college.

Imagine a day without water.

How would life be different? What would you still be able to do?

These thoughts and more were posed to fourth graders Thursday afternoon during the annual Flagstaff Water Festival at Foxglenn Park.

“Living in the high desert, water conservation is critical,” said Robin Harrington, Utilities Program Manager for the City of Flagstaff. “It’s very important that we start working with the children as soon as we can.”

The festival is a part of Arizona Project WET (Water Education for Teachers), an organization based out of the University of Arizona. Cities around the state have adopted the festival, from Nogales to Lake Havasu, and almost everywhere in between. More than 96,000 students statewide have participated in the Arizona Water Festivals since 2000.

In a happy twist of fate, this year’s festival happened to land on the same day as Imagine a Day Without Water, a national education and awareness campaign by the Value of Water Coalition.

“We thought it was a great hook to get people interested in the festival so we put together a lesson that really focuses on water conservation technology,” said Kerry Schwartz, director of Arizona Project WET.

Locally, Flagstaff Junior Academy and each of the schools in the Flagstaff Unified School District have made the festival a part of their fourth-grade curriculum.

Tents were spread throughout the park, where student teachers from Northern Arizona University’s College of Education demonstrated the water cycle, groundwater and aquifers, the value of water and watersheds through interactive lessons.

A group of students gathered around one of the watershed stations, looking at a 3D model with mountains and tributaries near a miniature town set in a valley. A reservoir was created with clay to hold the runoff water that had come down the mountain. Three other students were given the task of engineering a way to direct the water to the homes at the bottom. Equipped with a small plastic tube and more clay, they got to thinking.

“How can we use gravity to work for us?” one of the teachers prompted them after some unsuccessful maneuvering. With help from a volunteer, the students got one end of the tube in the lake and secured it with clay so that the other end pointed towards the city.

To test it out, another student was given a spray bottle full of water to represent rain. As he rained on the top of the mountain, the water went down to fill the lake they had made and then traveled through the tube, successfully reaching the city.

“The watershed mode is important to teach for Flagstaff,” said Gretchen McAllister, associate professor in the College of Education’s Department of Teaching and Learning. “The students look at erosion, pollutants and how that influences the environment and our water.”

Jordan Millidge, one of McAllister’s students, said he was feeling good about how the event went.

“I teach first and second grade right now, but the fourth-graders are fun and they’re really enthusiastic,” he said. “A lot of this is hands-on, which keeps their attention and helps it stick.”

The Flagstaff community is heavily involved with volunteers who come from NAU, the City of Flagstaff and SCA Tissue. The last two are also major sponsors of the festival.

“At SCA we believe that getting students and young people involved in environmental learning is a key part to lifelong sustainability,” said Amy Davis, Regional HR Manager at SCA in Flagstaff.

It also doesn’t hurt to have fun at the same time as learning.

“I volunteered last year and we worked with over 1,200 students,” Davis said. “It took me back to fourth grade science class.”

The smiles on the students’ faces as they got ready to leave were enough to see that they had enjoyed themselves.

“It’s something we look forward to every year and we really enjoy the collaborative effort between NAU, Project WET, SCA and the City of Flagstaff,” Harrington said. “It’s one of our favorite programs.”

Rising materials costs have delayed phase one of a housing development that will demolish the historic home of one of Flagstaff’s founding families.

LD6 Rep. Wendy Rogers back in hot seat over comments on Buffalo shooting

PHOENIX -- Less than two months after censuring her, state senators voted Monday to once again investigate Sen. Wendy Rogers to see whether sh…

Two Flagstaff students have been named Flinn Scholars for 2022 recently.

Temporary closures on the Coconino National Forest related to the Tunnel Fire loosened under an updated closure order effective at 5 p.m. Friday.

The Arboretum at Flagstaff reopens with new executive director

On Sunday, May 1, The Arboretum at Flagstaff opened its 41st season with a new executive director at the helm. Nathan O’Meara, with degrees fr…

The 1/10th acre Wilson Fire was reported at 1:30 a.m. Monday by an overhead aircraft. The fire is located 2.5 miles north of downtown Sedona i…

Jenna Escobedo, a student teacher from the College of Education at Northern Arizona University, explains how watersheds work to fourth grade students during a water festival at Foxglenn Park Thursday morning.

Jacob Goodenough, a student teacher from the college of education at Northern Arizona University, takes a question from a fourth grade student Thursday morning during the annual fourth grade waterfest sponsored by his college.