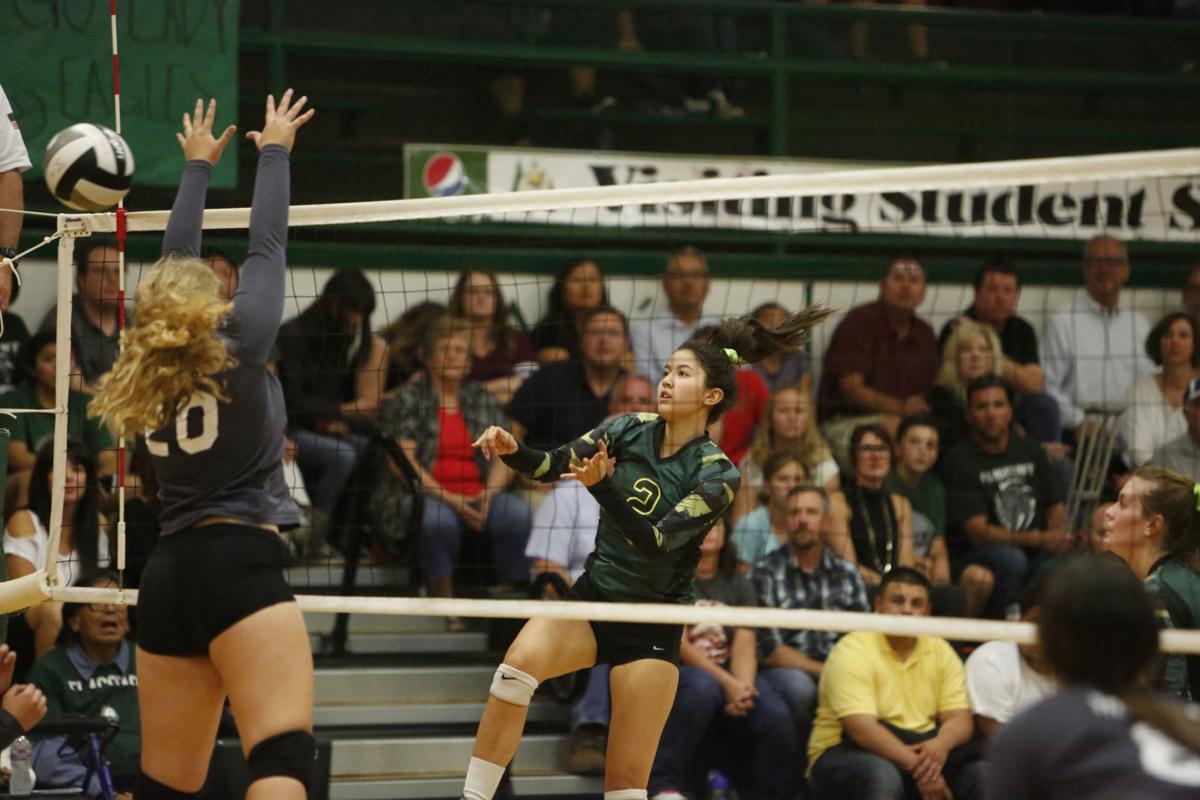 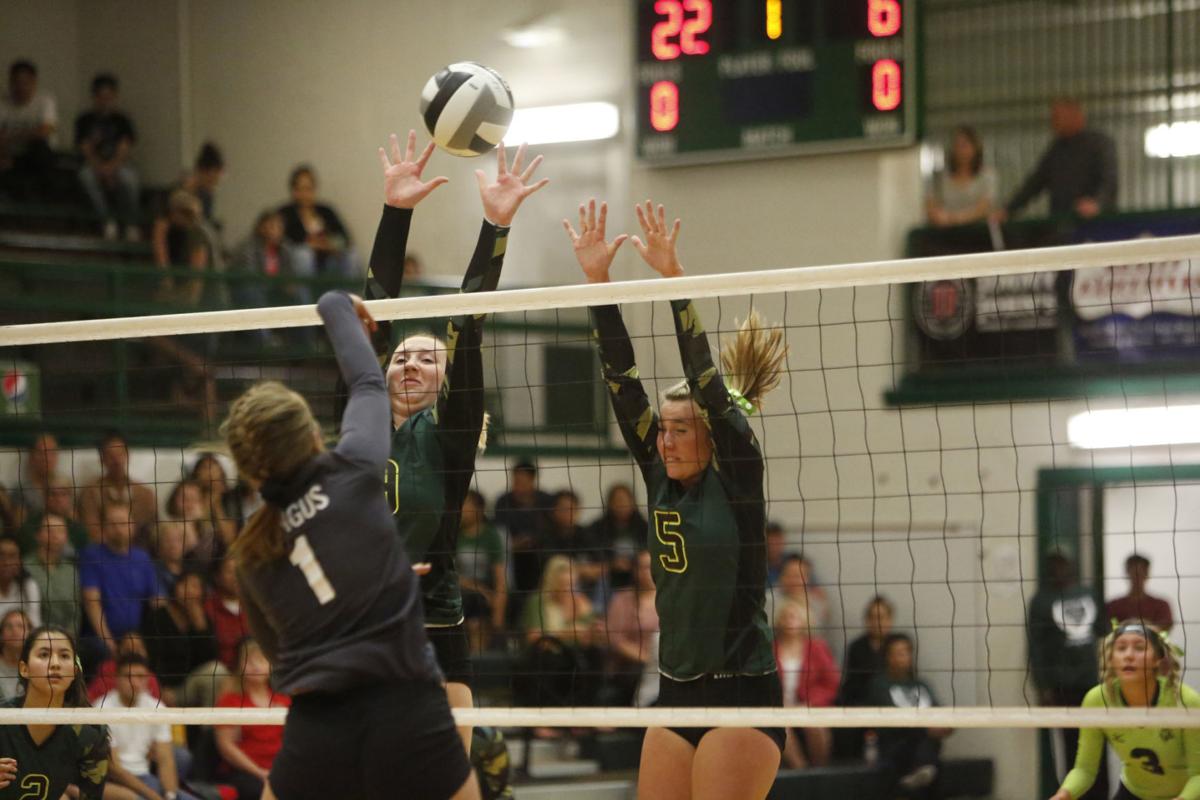 Flagstaff’s Tara Brain (19) and Jazzy Berry (5) leap to put up a block against a Mingus Union player Thursday evening at Flagstaff High School.

The Flagstaff Eagles transitioned smoothly into the Grand Canyon Region schedule on Thursday.

Freshman outside hitter Gracelyn Nez recorded 10 kills as the offense clicked and Flagstaff won its region opener at home, toppling the Marauders in three straight sets to improve to 3-1 overall.

Brooklyn Quick had 22 assists for the Eagles, who only allowed the Marauders to put double digits on the scoreboard in the final set on the way to the 25-6, 25-8, 25-18 victory that started a two-game win streak for the Eagles.

"We've been working really hard on transition in practice and it showed during the game. We kind of just flowed and worked really well together," said Quick, who also tallied six digs. "I think it's just because we've been putting a major emphasis on transition."

Hutton Hagerman helped keep the offense in system with her pass game, ending the night with 21 digs. The offense started hot and didn't cool down. The Eagles jumped out to a 14-3 lead early in the opening set on a couple long runs and followed suit in the next stanza on the way to a comfortable 17-4 second-set lead.

Mingus, which fell to 2-2 on its second straight defeat and was missing a hitter, didn't score a point until making it a 14-3 deficit, as the first two side-out points came on Flagstaff hitting errors.

As the match unfolded, different players got involved for the Eagles in attacking, including providing service aces. Jazzy Berry and Tara Brain kept the match in control in the first set for Flagstaff, Nez made the best of her feeds in the next stanza and Shea Wilson helped put the match on ice in the finale.

"We had specific goals for this match, and that was transitioning in the flow of the game, so I feel like they did that," said Eagles head coach Beth Haglin. "But they never let up and every person went in and worked on the things we were trying to improve on."

Brain finished with nine kills and four blocks, Berry had six kills and Wilson added four. Berry notched three aces early in the first set during a 9-0 surge that had Flagstaff ahead 13-1, and the Eagles finished the first with five aces. Flagstaff tacked on four aces in the second stanza and three in the third.

Nez, a freshman slugger, connected for back-to-back second-set kills to give her team a 4-3 lead it would not relinquish. Coming during the 8-0 lead-taking rally Nez sparked with an emphatic kill, she terminated the ball on an off-speed shot after her first hard swing was dug up.

"The better we play, the more can spread the offense out and more people can some swings in for sure," said Quick, who is in her senior year.

Devynn Hatathlie stepped in to help run the offense throughout the night, coming away with 10 assists in the win. Madeline Wilson had four blocks and Zoe Schrag reached in for three. Sofia Quintanilla registered four kills as the Eagles got their second consecutive sweep in as many matches.

"The girls passed well and when Mingus did hit the ball well or threw something at us, we still dug it well," Haglin said.

Flagstaff takes a break from the regular-season schedule for a showing at the Coconino Classic starting Friday at Coconino High School.

Flagstaff’s Tara Brain (19) and Jazzy Berry (5) leap to put up a block against a Mingus Union player Thursday evening at Flagstaff High School. 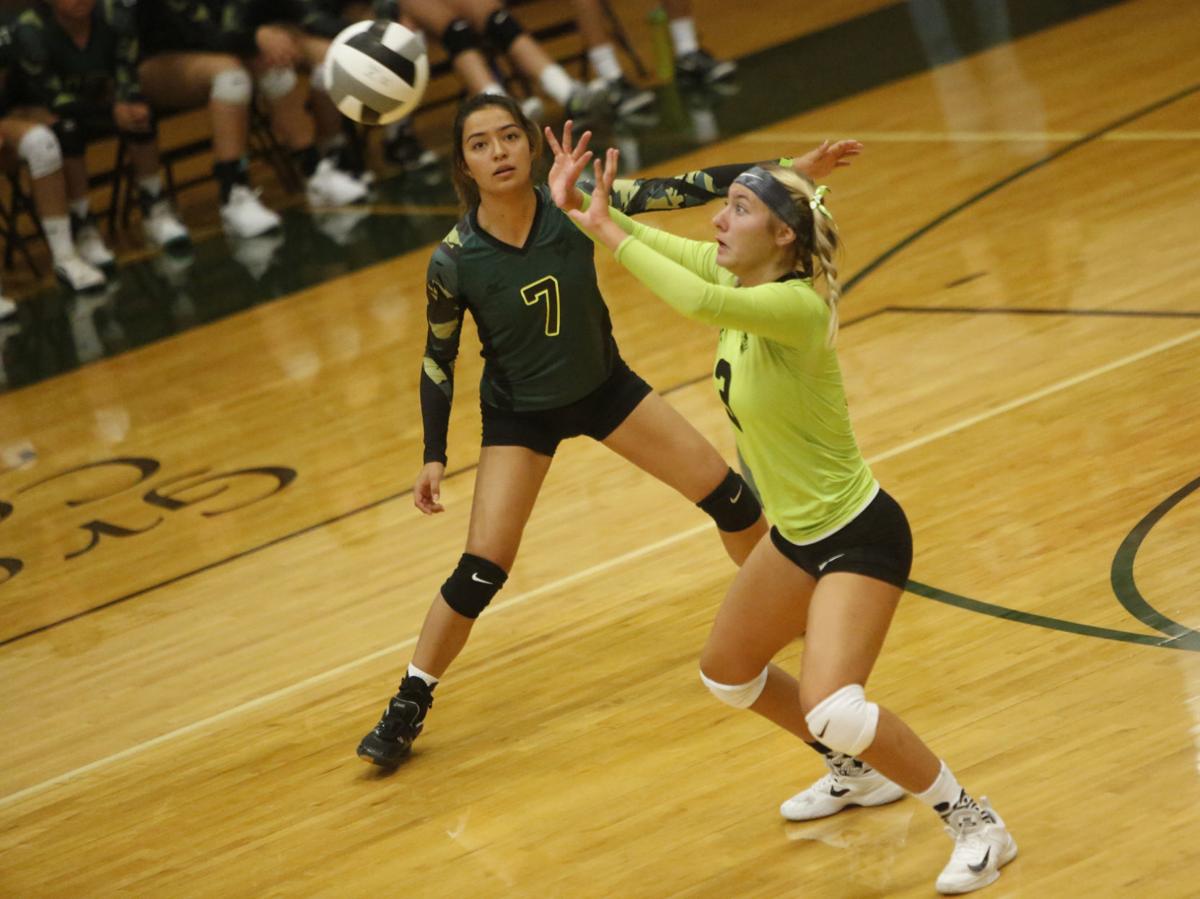 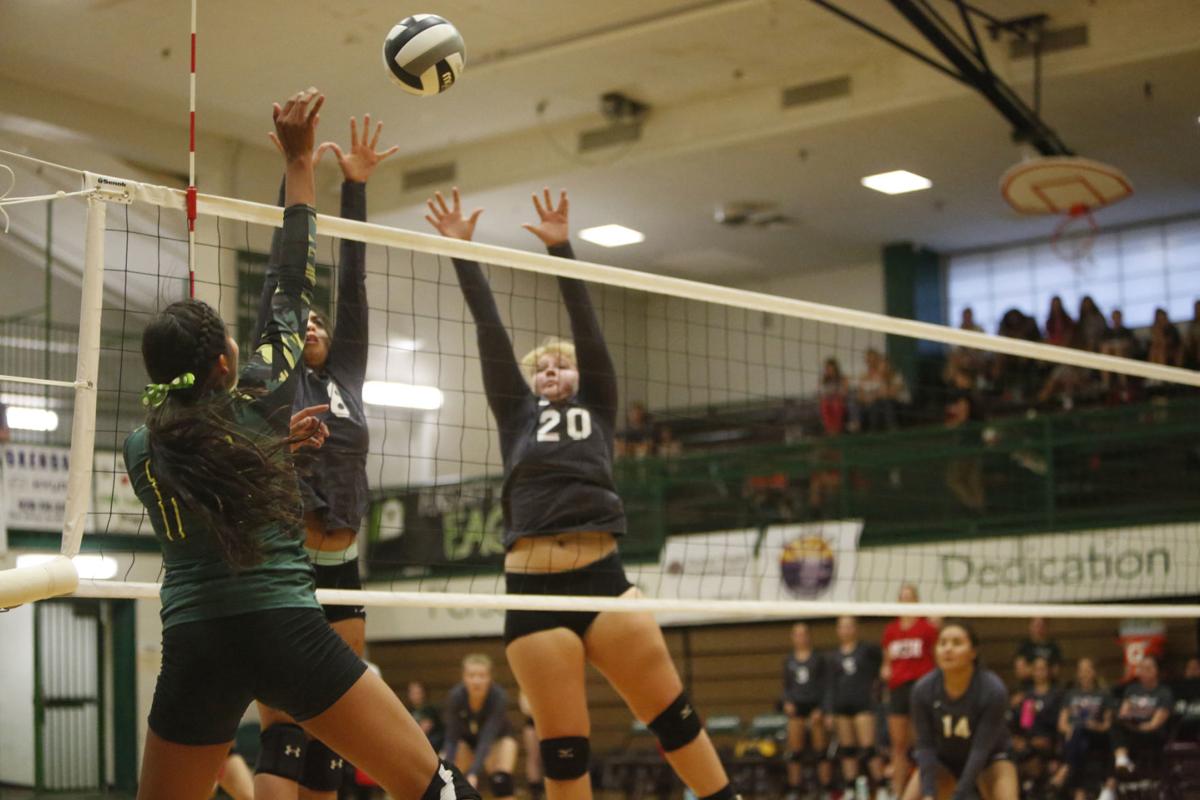