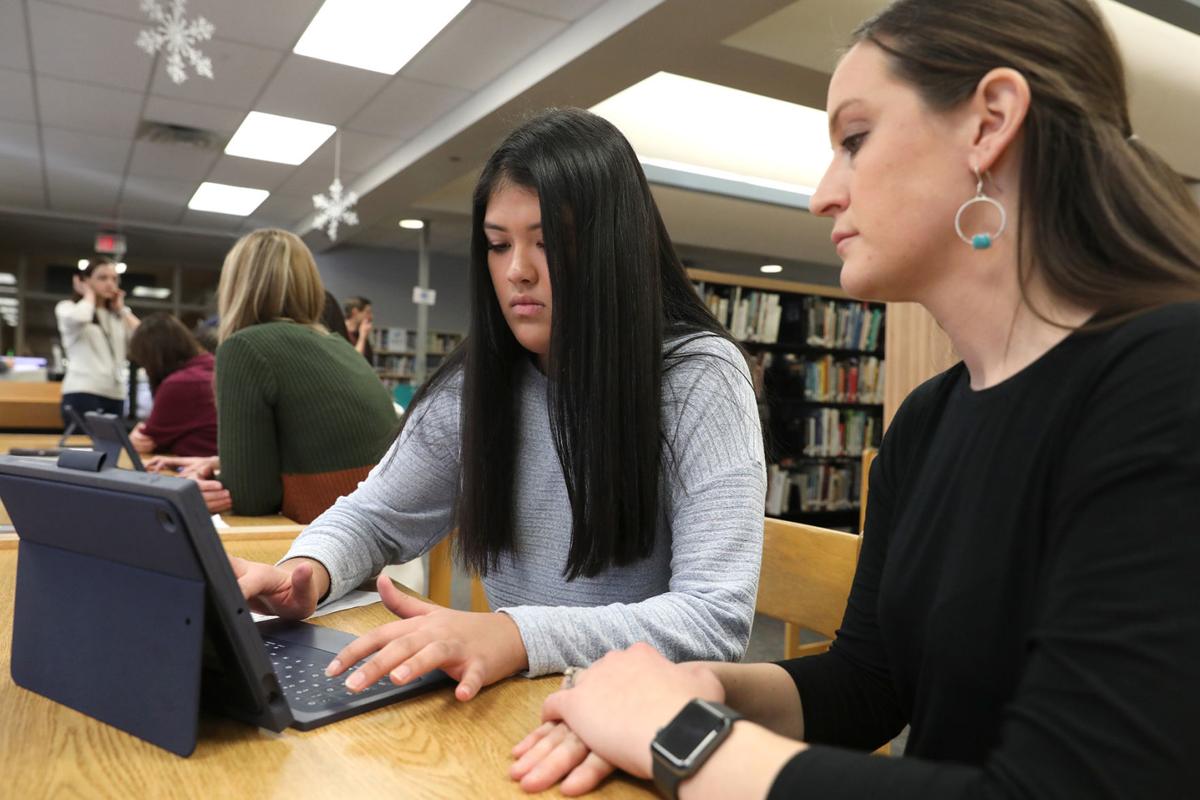 Renda Fisk, technology integration coordinator for the Flagstaff Unified School District, helps Abriana Bojorquez set up her personal iPad Thursday morning in the library at Coconino High School on the first day of the roll out of the one to one technology program. 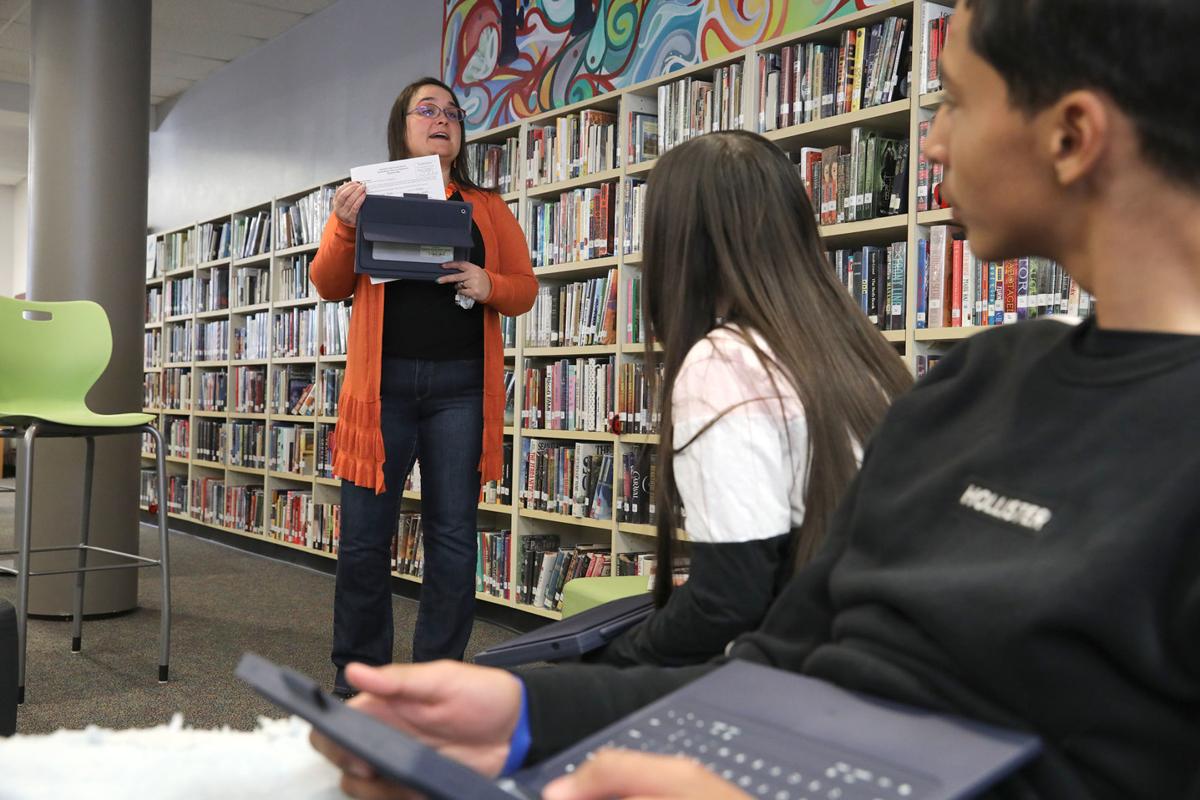 Ruth Thomas, executive administrative assistant of technology, helps students in the library at Coconino High School Thursday morning on the roll out day for each student at the school to get a personal iPad. 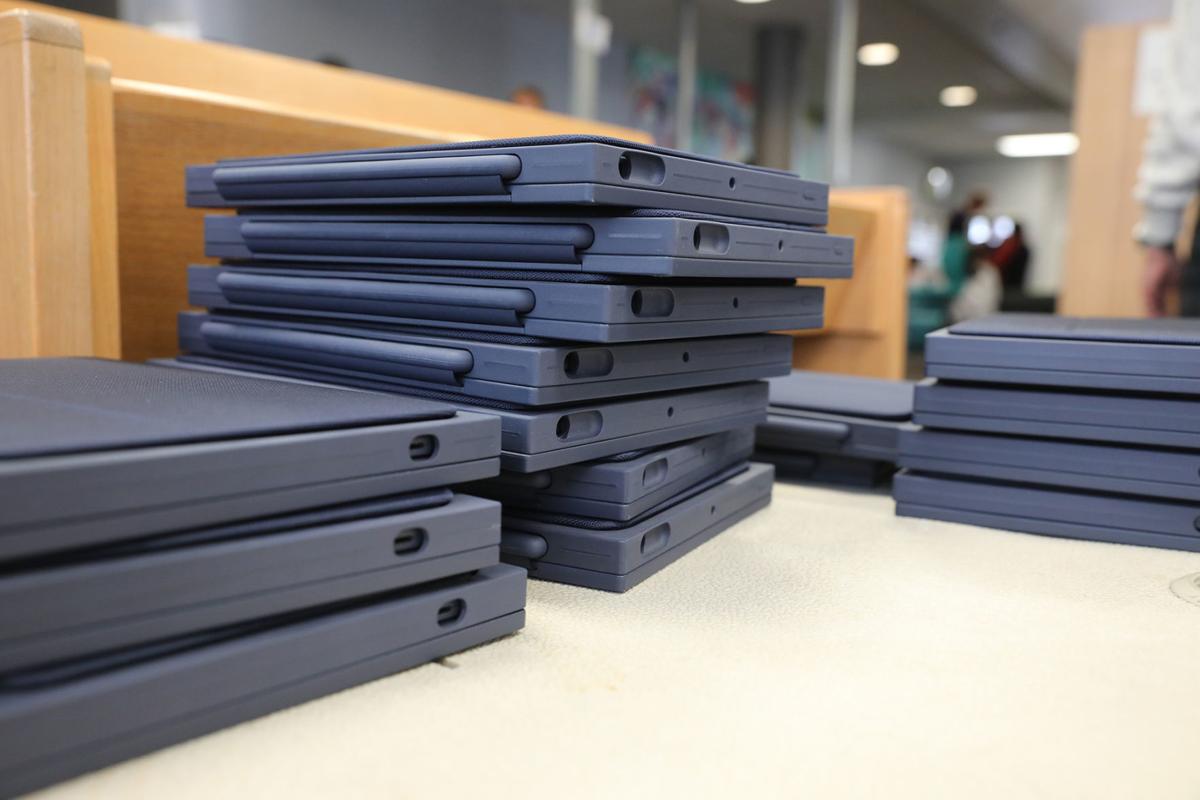 A stack of new iPads sits waiting for students Thursday morning in the library at Coconino High School.

At a rate of about 100 students an hour, iPads were dispersed throughout the Coconino High School student body this week, the first of the tablets given to Flagstaff Unified School District students as part of its 1:1 technology initiative.

The rollout began Wednesday and by the end of the day Friday, all of the nearly 1,500 CHS students received and set up their devices, with a few teachers beginning to have students use them in their classes.

The desks in Lily Stevens’ classroom were crowded Thursday morning as her 10th-grade English students completed a paper worksheet beside their iPads, which mirrored the presentation shown on the screen at the front of the class. At first, Stevens led the presentation on all devices, but then allowed students to progress on their individual devices. Her class received their iPads the day prior.

“All of my students brought their iPads today, they were all fully charged and everyone got onto the Wi-Fi really easily,” Stevens said. “It’s been seamless. It’s great.”

Stevens is one of the 11 iPad trainers at CHS. Previously, Stevens used one of the English department’s set of iPads — at CHS, two were allocated per core subject — at least once per week, and up to a week at a time for essay research.

“This way I don’t annoy my coworkers and I get the iPads every day, so whenever I need them, my students have them, which is wonderful,” Stevens said.

English teacher Shawna Braun, who chose to postpone use of the iPads until the following week, was excited that her ninth graders can easily participate in review games and online research in-class. Before, they would have to find an available iPad from the department’s cart if they did not have smartphones.

Within a day of receiving the devices, Braun’s students had a chance to test their limits. The students said the iPads had less restrictions than the school’s former iPads, even allowing video streaming on various platforms.

Some students have voiced some concerns about the new iPad usage.

“My backpack was lighter before. I didn’t think it would weigh that much,” Brinna Bedlion, 15, said of the iPads. Although lighter than typical textbooks, she explained that most teachers do not ask their students to carry the books every day, unlike the new practice for the iPads.

With constant access to online school resources, Hope Williamson, 14, was concerned about the amount of homework, which could easily increase when teachers have the ability to assign it online at any time.

Principal Stacie Zanzucchi said three students at the high school had initially opted out of use of the iPads. After a sit-down with school administrators, who explained they would be at an educational disadvantage, the students opted back in.

“We’re joining the 21st century and making sure our students have the skills and the ability to access the content using their digital platforms. If they choose not to, then they’re going to have to figure out their system to access the same content that students would otherwise be accessing through technology,” Zanzucchi said, while still saying the school would work with future students and families who strongly resist the devices.

If families or students are concerned about lost iPads, considering the $400 replacement fee, Zanzucchi said there is a classroom where students can leave their devices at the end of the day. No students have opted in yet for this service, possibly due to concerns that homework would be inaccessible without them.

Stevens said most of the homework she assigns will be accessible online, with a few exceptions, in case students want to leave their iPads in the building overnight.

Like any teaching tool, the iPads will likely be used differently between classes.

Heather Zeigler, Digital Literacy Specialist for the district, said this is by design. Teachers will determine how and when the iPads are used in class. Right now, most device usage is centered on instructional presentations and accessing online resources; the areas teachers were trained this summer.

At CHS, teachers have created an “appy” hour, during which the teachers share the apps that are working in their classrooms. Zanzucchi said the goal is to expand this practice to allow teachers to develop iPad-specific curriculum.

Stevens hopes to also use the devices to teach soft skills such as  responsibility, respect and integrity, as well as technology skills needed for their life after high school.

“I want my student to take an app they don’t know how to use and find tools on the internet or somewhere else to train themselves to use the app because, when you’re an adult, you don’t always have a teacher or a boss to show you these things,” Stevens said.

To prepare students with technology skills iPad use district-wide this year, teachers will be showing a video in class that includes tutorials as well as reminders about the FUSD acceptable use policy.

A year after voters approved a bond measure providing Flagstaff Unified School District with $10.6 million to give every student a tablet, the…

A week after ransomware infected Flagstaff Unified School District computers, the district is continuing to investigate the cyberattack and is…

Flagstaff Unified School District (FUSD) will be hosting kindergarten registration Wed., February 5 from 4:30 p.m. to 6:30 p.m. at all FUSD el…

Flagstaff Unified School District has entered into a $9.2 million energy contract to improve facilities and learning spaces by upgrading every…

Renda Fisk, technology integration coordinator for the Flagstaff Unified School District, helps Abriana Bojorquez set up her personal iPad Thursday morning in the library at Coconino High School on the first day of the roll out of the one to one technology program.

Ruth Thomas, executive administrative assistant of technology, helps students in the library at Coconino High School Thursday morning on the roll out day for each student at the school to get a personal iPad.

A stack of new iPads sits waiting for students Thursday morning in the library at Coconino High School.