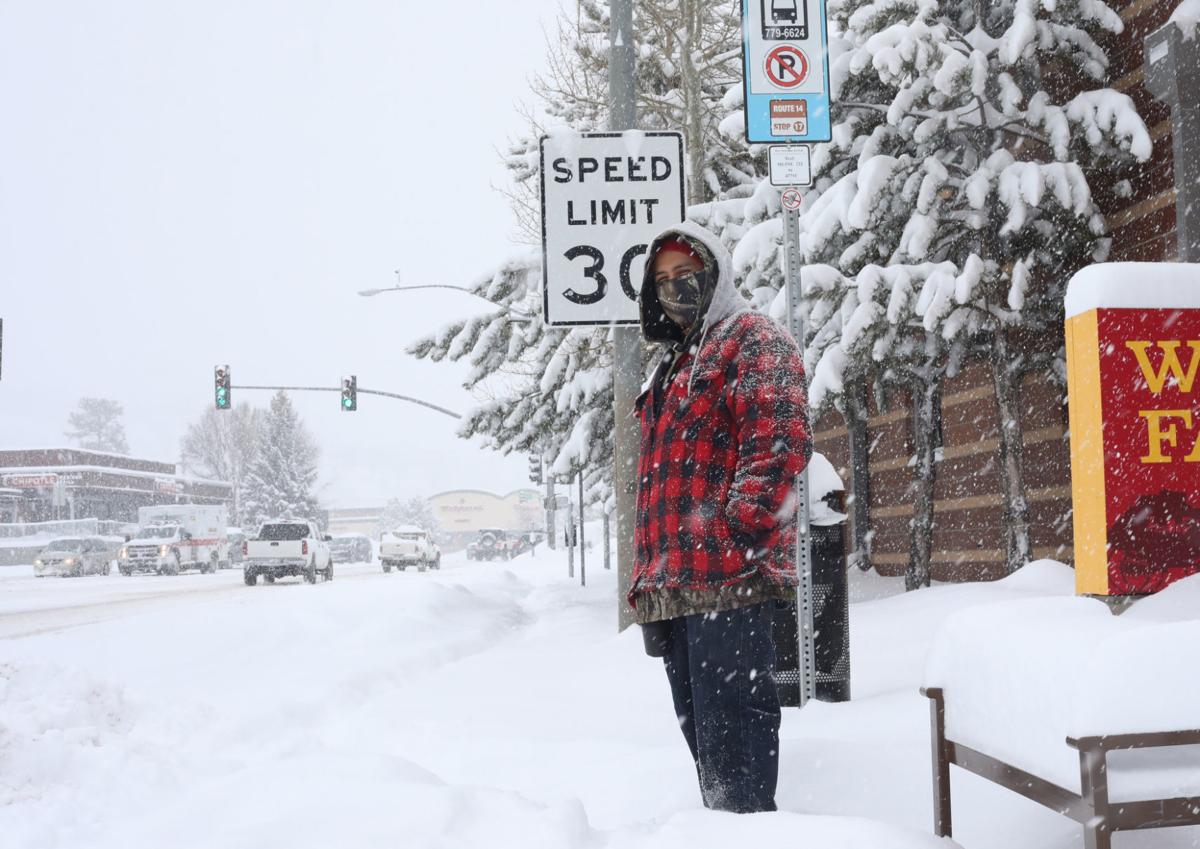 Ewell Tootsie waits at the bus stop outside of the Wells Fargo bank on Milton Road Thursday morning on his way home from work. 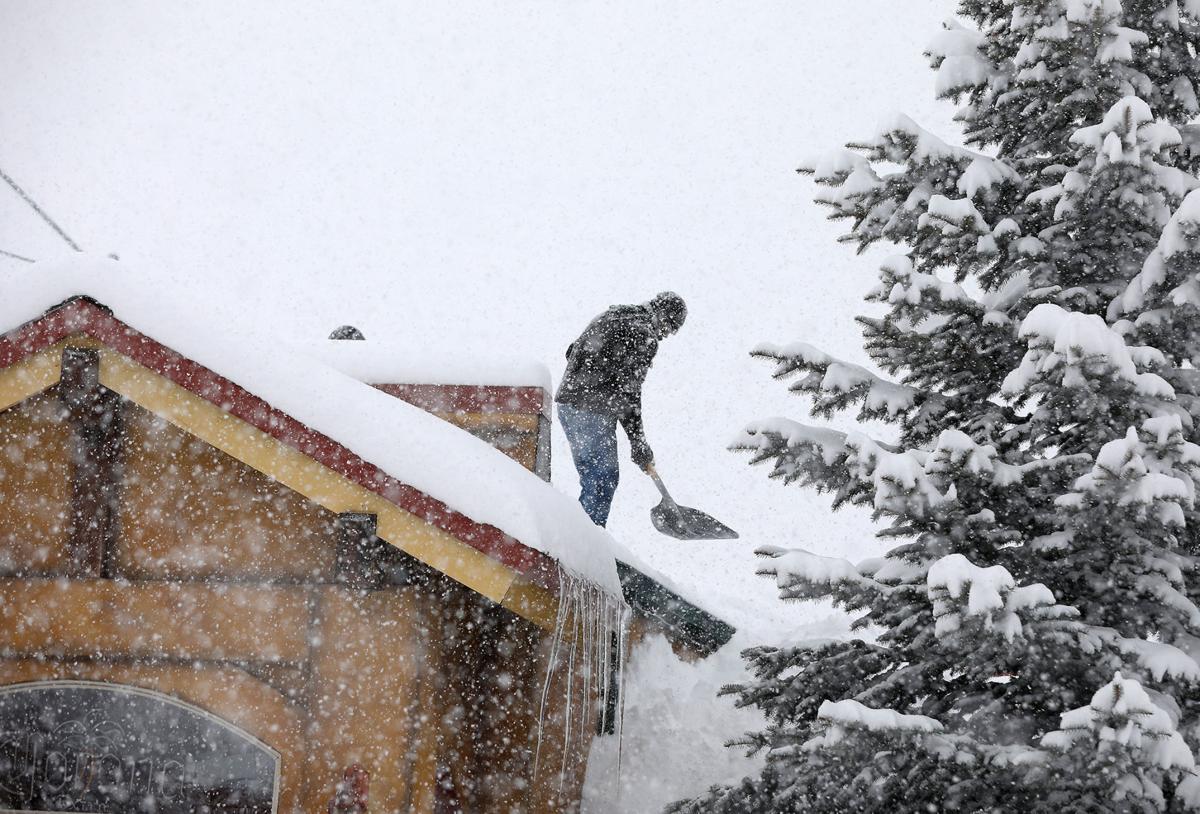 Danny Lopez works to clear the roof of Salsa Brava of more than a foot of snow as more snow continues to fall Thursday afternoon. 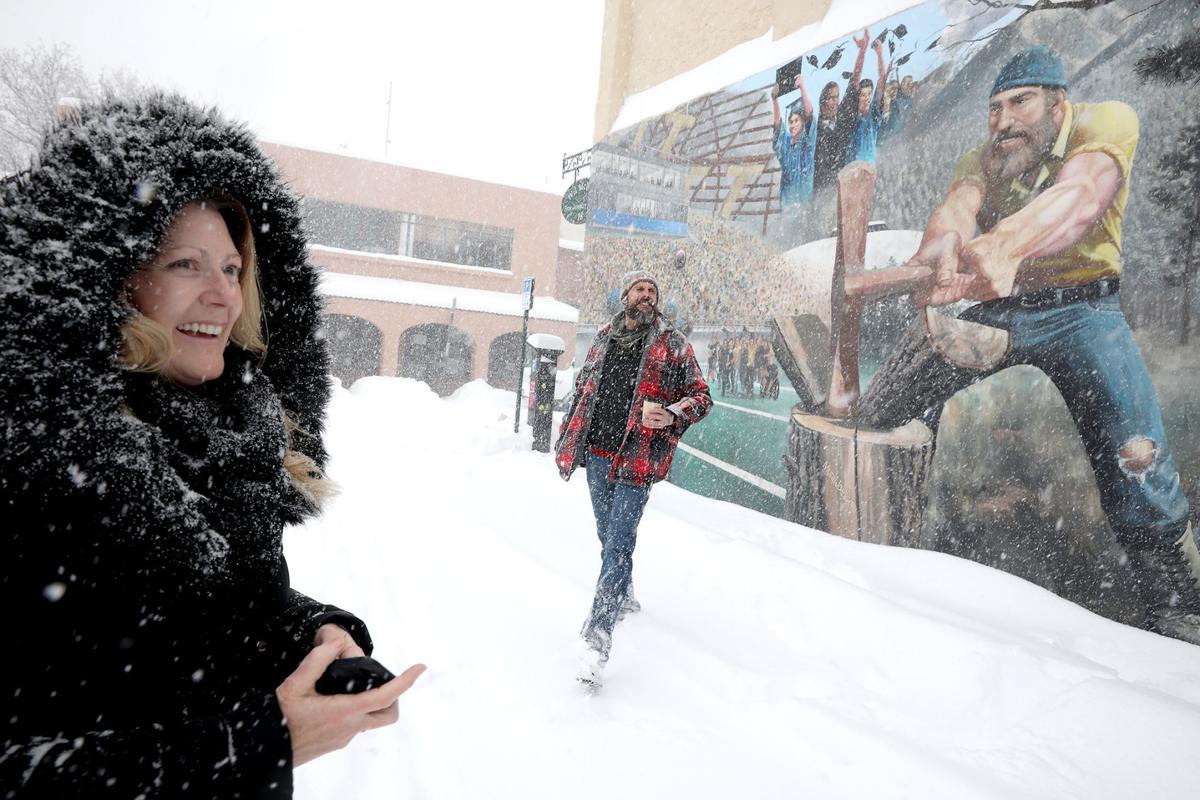 Dena and Bryan Crawford almost had downtown Flagstaff to themselves Thursday morning as a winter storm dropped heavy snow. The National Weather Service is forecasting up to 30 inches of snow from the storm over two days.

The record snowfall for a single calendar day in Flagstaff previously stood at 31 inches--an amount logged in 1915 and one that remained on top for more than 100 years.

That is until Thursday, when 31.6 inches of snowfall in just 17 hours surpassed the title-holder.

“Snowpocalypse"-- as the winter weather was fondly dubbed by locals -- changed from a storm set to drop up to 24 inches in 48 hours to one that dropped that amount and more between Wednesday evening and 5 p.m. Thursday.

“This storm has been a real active changer,” National Weather Service meteorologist Jonathan Suk said, adding that this made the storm more difficult to predict.

With more snow to come Friday afternoon, the storm could approach the record amount of snowfall for Flagstaff in a two-day period, Suk said.

That record is 51 inches, also set in 1915, and NWS is expecting about 48.7 inches of snow by the storm's end Friday evening.

As Thursday progressed and the snow worsened, more and more businesses and organizations closed their doors and told their employees to go home.

At approximately 4:30 p.m. Coconino County declared a state of emergency, which allows for funds to be allocated as needed to keep up with the storm. The city followed suit with a state of emergency declaration coming in at 7:30 p.m. County offices will be closed through the weekend and are set to reopen on Monday; non-essential city services and facilities closed for Friday.

Shortly after 1 p.m., Flagstaff Unified School District -- as well as charter and private schools including Basis Flagstaff, FALA and Northland Prep Academy -- called off school for Friday. Coconino Community College followed suit soon after and as the clock approached 5 p.m., Northern Arizona University, too, canceled all classes for the second straight day.

Flagstaff's Pulliam Airport shut down at 10:30 a.m. due to a lack of visibility on the runway, according to Airport Director Barney Helmick. There was no indication as to when the airport would reopen. Thursday evening, Mountain Line canceled all transit and Mountain Lift paratransit services for Friday, as well as its administrative offices.

Arizona Department of Transportation closed I-17 northbound, turning away traffic at Exit 179 with no estimate as to when the interstate would again become passable. Other road closures included state routes 89A, 87 and 64.

According to Rex Gilliland, Coconino County Sheriff’s Office commander, despite the heavy snowfall, deputies and other county law enforcement had not encountered the predicted onslaught of accidents or emergency calls.

“So far it hasn’t been too overwhelming," Gilliland said. "I think a lot of people have chosen to stay home, so that has reduced the number of accidents and incidents. So that’s been very helpful.”

The sheriff's office responded to several slide-offs and minor accidents, Gilliland said, but no fatalities or major medical emergencies were reported in the county.

Northern Arizona Red Cross was still at the ready, however -- with 20 volunteers on standby in case they needed to open a warming or overnight shelter at Sinagua Middle School.

Volunteers for the organization parked a trailer filled with cots, blankets, water and other supplies at the school on Wednesday in anticipation they might receive the call from Coconino Emergency Management to get the shelter up and running.

According to Frank Bourget, executive director for Northern Arizona Red Cross, the organization has never opened a shelter as a result of snow.

“This may be a first. Most of the time it’s because of wildfires and possible and power outages from other disasters,” Bourget said.

The winter weather wasn't confined to in Flagstaff either. Snow was reported in areas as far south as Scottsdale and Cave Creek as well as Tucson, according to several Arizona news stations. And as per Suk, Prescott was also likely to see record-breaking snowfall for a single calendar day. That record was set in December 1967 when Prescott received 17 inches of snow. Suk said the current storm was nearing that amount.

Thirty-year Flagstaff resident Jan Petrucci said she hadn't seen anything quite like the storm since moving to town in 1988.

"My first thought was, well we have a lot of shoveling ahead of us," Petrucci said.

She and husband Joe shoveled their Equestrian Estates drive four times throughout the day.

"Apart from the beauty of it -- cause we've seen this several times since we've lived up here -- is the amount. We've never seen this much in one day. I think that's what's so different about this storm," Petrucci said.

Snow is predicted to fall well into Friday, with a winter storm warning in effect until 5 p.m.; new snow accumulation of three to five inches is possible.

Friday closures and cancellations as of 7 p.m. Thursday

This year's monsoon season has been Flagstaff's driest to date, based off National Weather Service rain gauge data at the Flagstaff Airport.

When it comes to weather, Arizona is a state of extremes. Not just the desert-mountain divide, either. Maybe it’s the effects of climate chang…

No doubt, 2019 was a volatile weather year. One of the record books, as they say.

Ewell Tootsie waits at the bus stop outside of the Wells Fargo bank on Milton Road Thursday morning on his way home from work.

Danny Lopez works to clear the roof of Salsa Brava of more than a foot of snow as more snow continues to fall Thursday afternoon.

Dena and Bryan Crawford almost had downtown Flagstaff to themselves Thursday morning as a winter storm dropped heavy snow. The National Weather Service is forecasting up to 30 inches of snow from the storm over two days.