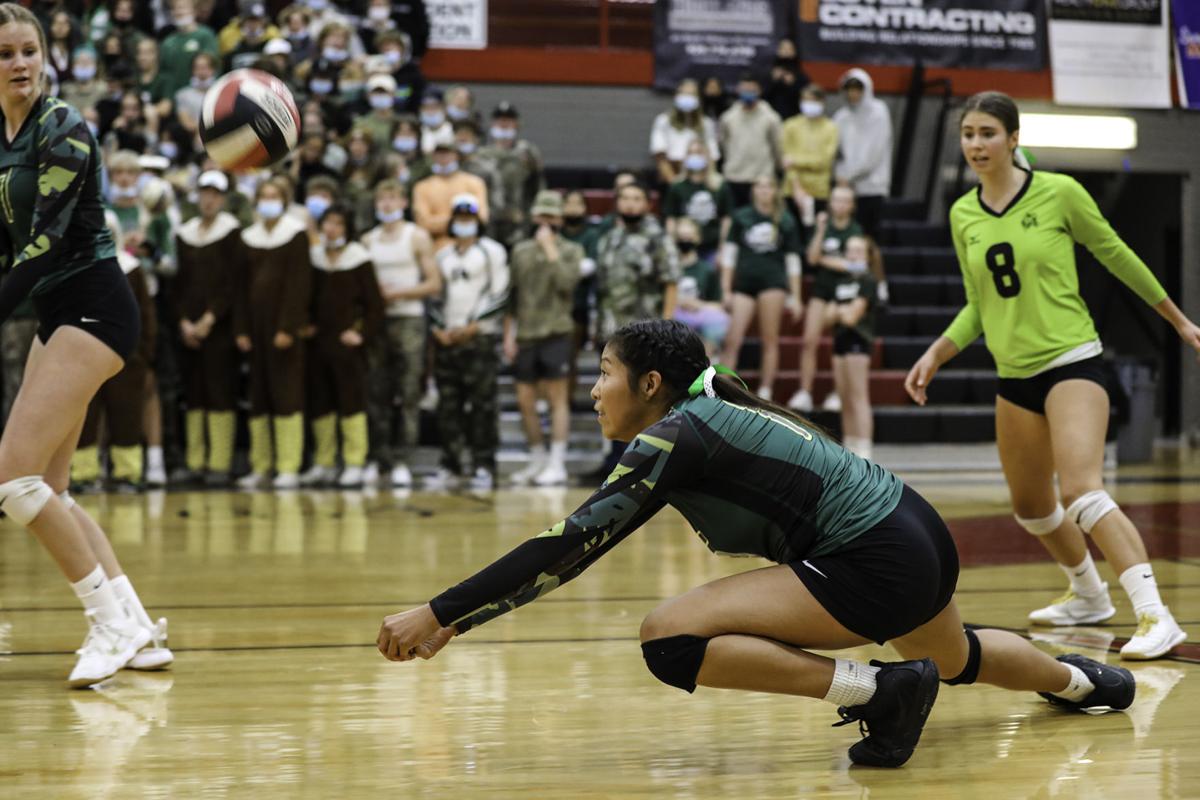 Flagstaff's Gracelyn Nez (15) extends to pass the ball during a crosstown rivalry match against host Coconino this season. 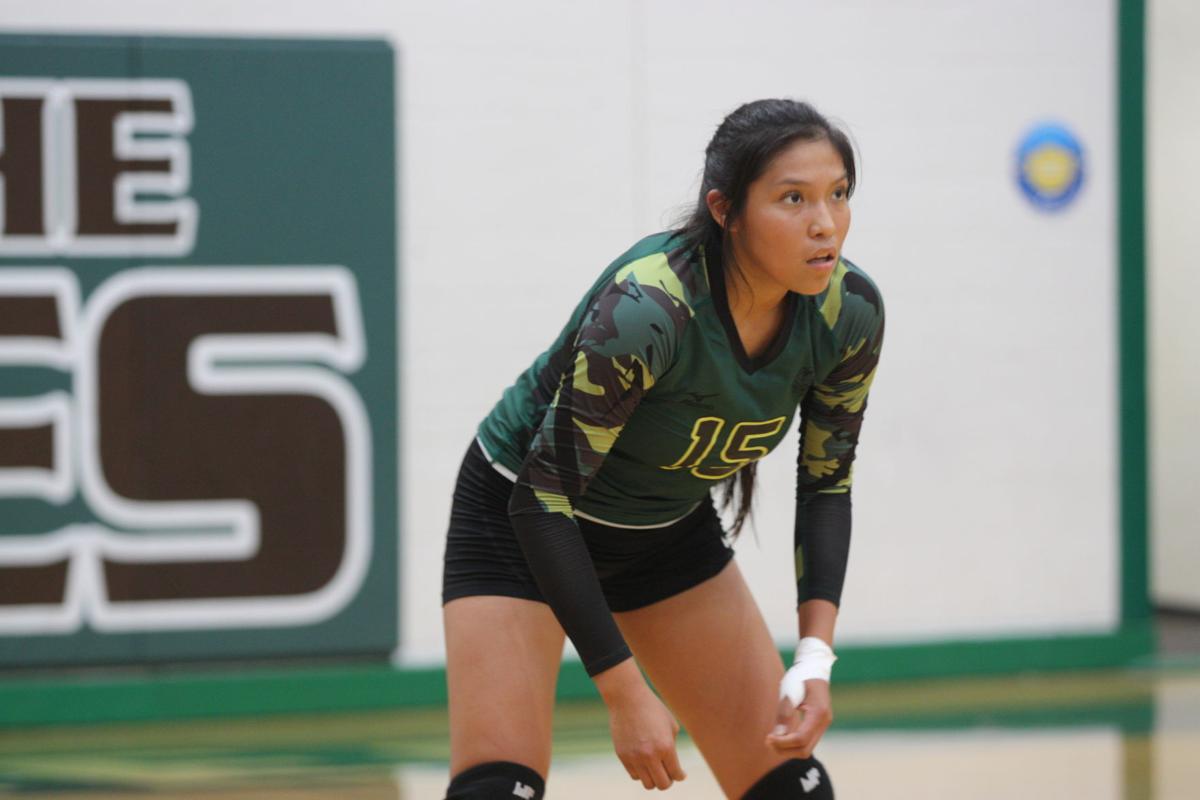 The Flagstaff Eagles volleyball team, led by senior outside hitter Gracelyn Nez, ran quickly off the court to take off their shoes after a playoff match on Nov. 4. They didn’t want their court shoes getting wet.

Flagstaff had just defeated ALA - Queen Creek 3-2, ending on a 15-11 victory in the fifth set in the first round of the 4A Conference state tournament. It would be the team’s last home match of the season in Flagstaff’s War Memorial Gymnasium. The Eagles, followed by a packed student section, celebrated their playoff win in their custom way, jumping into the school pool.

Still somewhat soaked from the celebration with teammates and classmates, Nez said despite being down a set twice -- 0-1 and 1-2 -- she refused to have her last match at home be remembered as a sad day.

“I kept saying, ‘We’re not losing my last time on this court. That’s not happening,’” she said.

Nez, who totaled 1,279 kills in her high school volleyball career and was integral in Flagstaff’s winning record each of the past four volleyball seasons, has had so many memorable moments as an Eagle. She earned Grand Canyon Region Player of the Year for her efforts this season. Though as of writing the overall 4A honors had not been announced, Nez is likely a shoe-in, having earned a spot on the first team last season and performing so well her senior year.

It was not always easy for the Eagles, nor any high school team for that matter. The roar of fans in pregame introductions was limited to a few dozen clapping family members in the 2020-21 season, as COVID-19 protocols limited the crowd’s numbers on match day.

Starting from the first match of 2021, Flagstaff’s gym was crowded for nearly every contest, and meaningful matches against crosstown rival Coconino or other playoff opponents were often nearly at capacity. And, with numerous supporters, Nez was always announced last and usually had the biggest cheering section.

Beside the goal of winning matches in their final season, Nez and the Eagles' senior class drew energy from the home environment. It meant even more, as they knew what playing in a nearly empty gym the year before felt like.

“I love the student section, I love the fans, I love our bench, I love our team, and that’s what kept the momentum going this year,” Nez said. “I’m so glad I’m a senior now instead of a senior last year, so I get to experience this one more time before I go off to college.”

Beside being one of Flagstaff’s best players each of her four varsity seasons, especially as a senior, Nez also matured into a leader in her final year. Coach Beth Haglin said she saw significant development over the course of Nez’s career.

“Gracelyn is very intelligent on the court, and when the pressure is on her she has -- especially this year -- really risen to the occasion. I tell my setters that when we need a side-out, we’ve got to use the big dog. Go to her, and they do. And everyone in the gym knows it’s going to her, but who cares if she keeps doing it?” Haglin said.

The Eagles fell to a high-powered Estrella Foothills squad in the quarterfinals on Nov. 9, five days after beating the Patriots in the opening round.

Nez went straight into the basketball season, in which the Eagles also are a likely playoff team. And beach volleyball will probably come after that, as the Eagles are a veteran-laden team in the sand.

But, before any of that, Nez and teammates enjoyed a sudden dip into the pool, still in their camouflage uniforms from the match just minutes before. It was one final memory from a great prep volleyball career.

“It’s an honor. I’m so glad I chose Flagstaff High School. Beth is such an amazing coach,” Nez said. “And at every practice and games I learn something and I’ve really had so much fun.”

It took a while for the conversation to turn productive during Thursday’s special city council Meeting. In its earliest minutes, the meeting a…

Flagstaff's Gracelyn Nez (15) extends to pass the ball during a crosstown rivalry match against host Coconino this season. 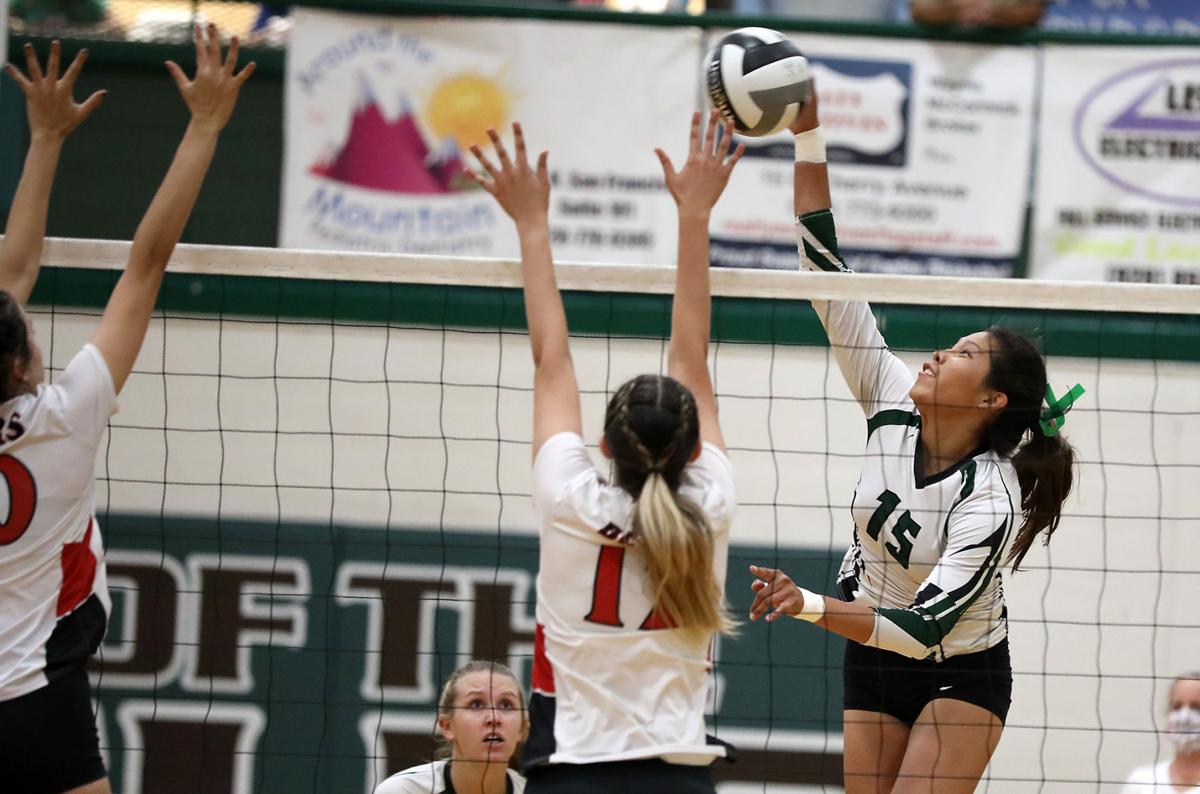 Flagstaff’s Gracelyn Nez (15) attacks the ball in September during her team's home match against Bradshaw Mountain.