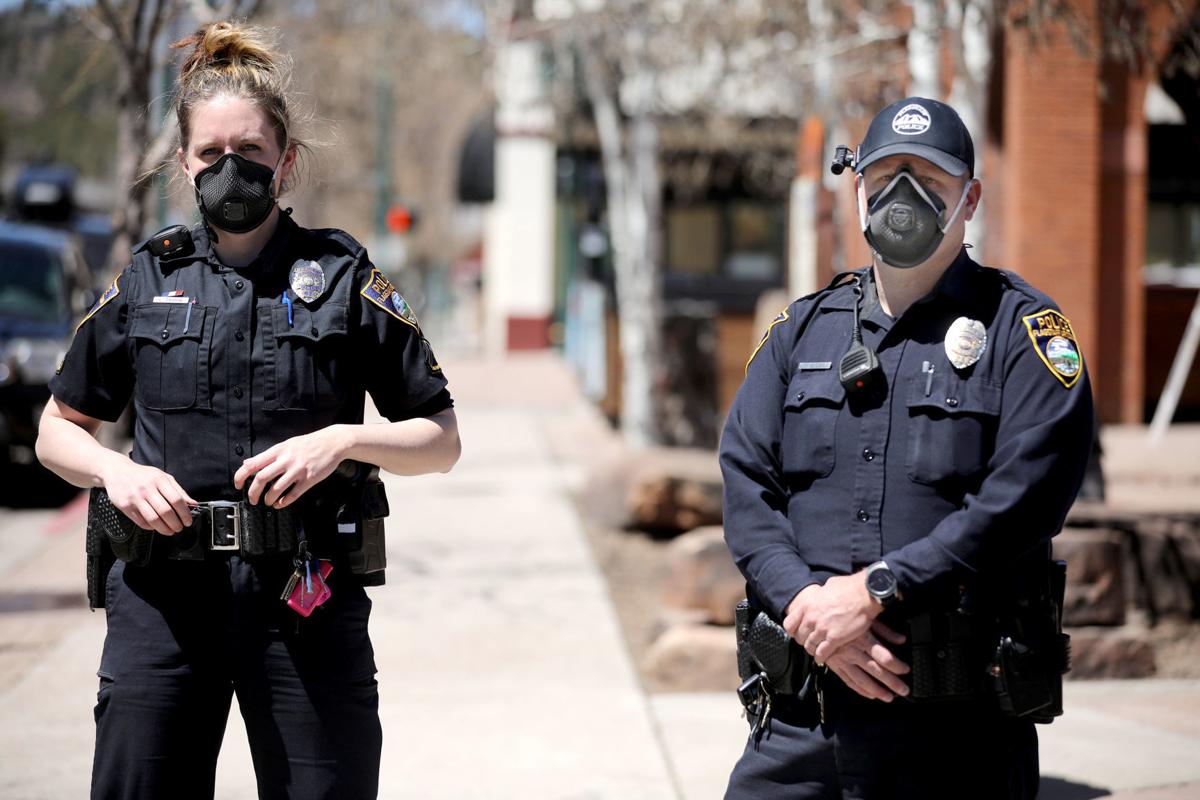 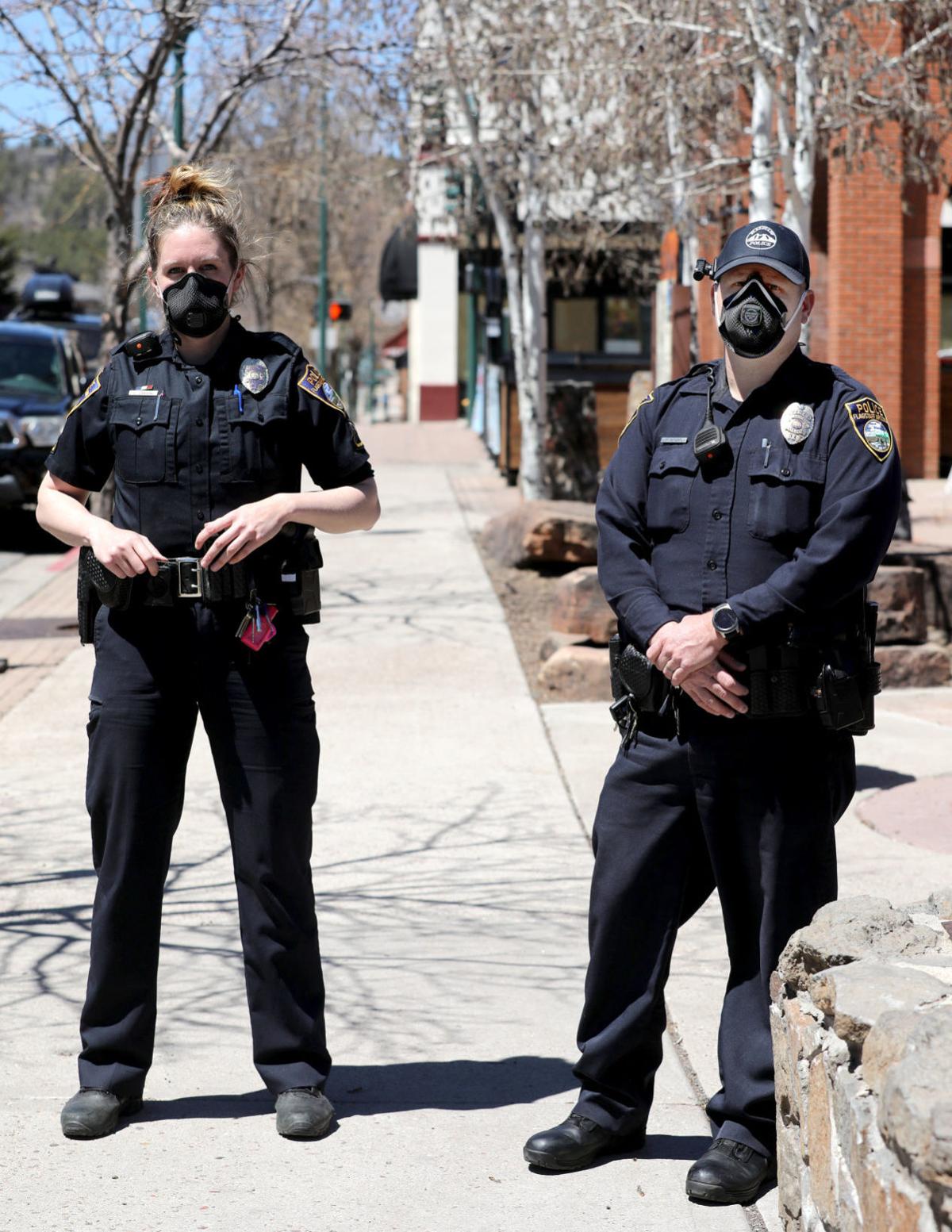 Flagstaff police are adapting to the new reality set in by the coronavirus, as social distancing orders have upended the normal habits of society.

Property crime and the frequency of public intoxicant calls have increased across the city across the past three months. During their work, officers feel they cannot safely assume they have not come into contact with the virus and are preparing for the worst.

Matthew Thompson, a corporal with the Flagstaff Police Department, said his office has looked at the rate of spread of the coronavirus through police departments in harder hit cities for examples of what could happen, if only at a reduced rate throughout the community.

To be prepared for that possibility, as testing and personal protective equipment are scarce, Thompson’s family has created a quarantine plan should he or his family begins showing symptoms of the coronavirus.

“I will go home and change clothes in the garage before coming into the house,” Thompson said. “I make sure I wash my hands before leaving work and put on a clean pair of clothes before being around my wife and children.”

Trevor Cooper, a corporal with the Flagstaff Police Department, said patrol officers have not seen a significant change in the total calls that come in for domestic violence, with 149 in March 2020 as opposed to 132 during March 2019. However, the department’s day shift has seen a decrease in domestic violence calls, while the night shift has seen an increase in calls in March.

“Not as it would come as a surprise, a huge portion of domestic violence is alcohol related,” Cooper said. “Drinking habits have changed significantly over the past few weeks. We’re not seeing as much over the day.”

Calls of people drunk in public increased 47% in March after totaling 197 in the month for 2019. However, the reports of people being drunk in public for the first three months of 2020 were already high. The Flagstaff Police Department has already seen 841 reports for public intoxicants this year compared to 548 by the end of March 2019, a 53% increase.

Property crimes have also increased through the beginning of this year, which includes offense such as burglary and trespassing. Although the increase is not as steep, there has been a 13% increase with the majority of the increase in reports occurring in January and February.

Of the burglaries that have occurred, Cooper said all but one had been committed by public intoxicants.

As a consequence of the court’s policy of releasing non-violent offenders to avoid spreading coronavirus in the county's jail, repeat offenders of shoplifting, trespassing, and disorderly conduct have taken up more of the police department’s day, because they are not serving jail time, Cooper said.

With all of the local and state declarations of emergency in addition to orders for social distancing, business closures and self isolation, police have been deployed and keep an eye out for violations.

Thompson added the department has had reports of violations, but normally the calls were the result of a misunderstanding. He said to someone passing by, a person waiting in a restaurant for a to-go order can look like a person eating inside the business. Flagstaff officers haven’t been required to enforce the orders as of early April.

“We found that people were generally — all the businesses we checked —  in compliance with the emergency proclamation,” Thompson said.

The selective enforcement squad has instead directed its attention to the increased public intoxicant calls because of the lack of proclamation violations.

Flagstaff police officers said they understand that anyone interacting with police at this time might want to maintain their recommended six feet of social distance.

Thompson said officers have been trying to respect social distancing requests when possible.

One easy method involves leaving windows rolled up during traffic violations. Thompson said officers have been allowing people to place their driver’s license up to their window to minimize transferring objects. But depending on your choices on the road, you could still be forced to handle a ticket.

“Anyone having contact with the police department for any reason and wants to minimize contact, we don’t mind doing that,” Thompson said. “Just communicate that to us.”

However, if an interaction requires an arrest Thompson said it shouldn’t come as much surprise that officers will enforce the law, meaning they will be forced to touch you to place you under arrest.

The Placebo Effect might not be as powerful as once believed

The Placebo Effect might not be as powerful as once believed

Wild horses in Bosnia cause headaches for farmers

Wild horses in Bosnia cause headaches for farmers