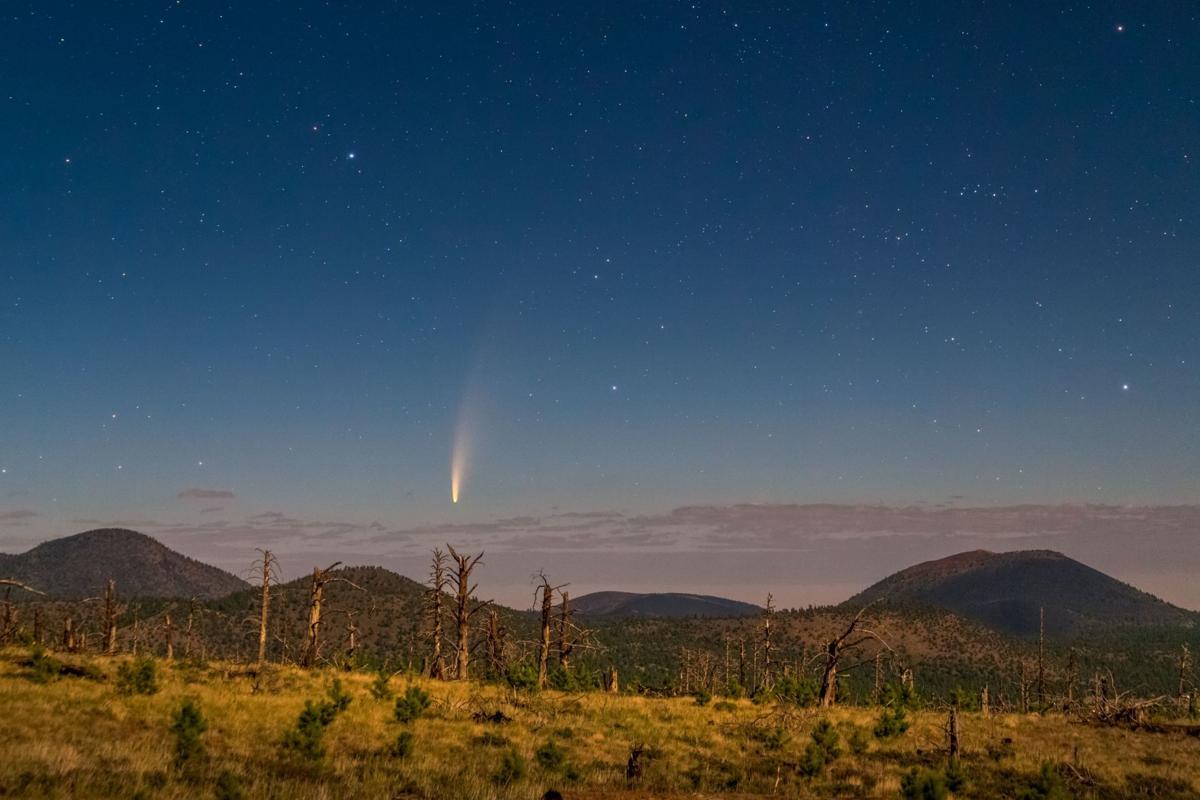 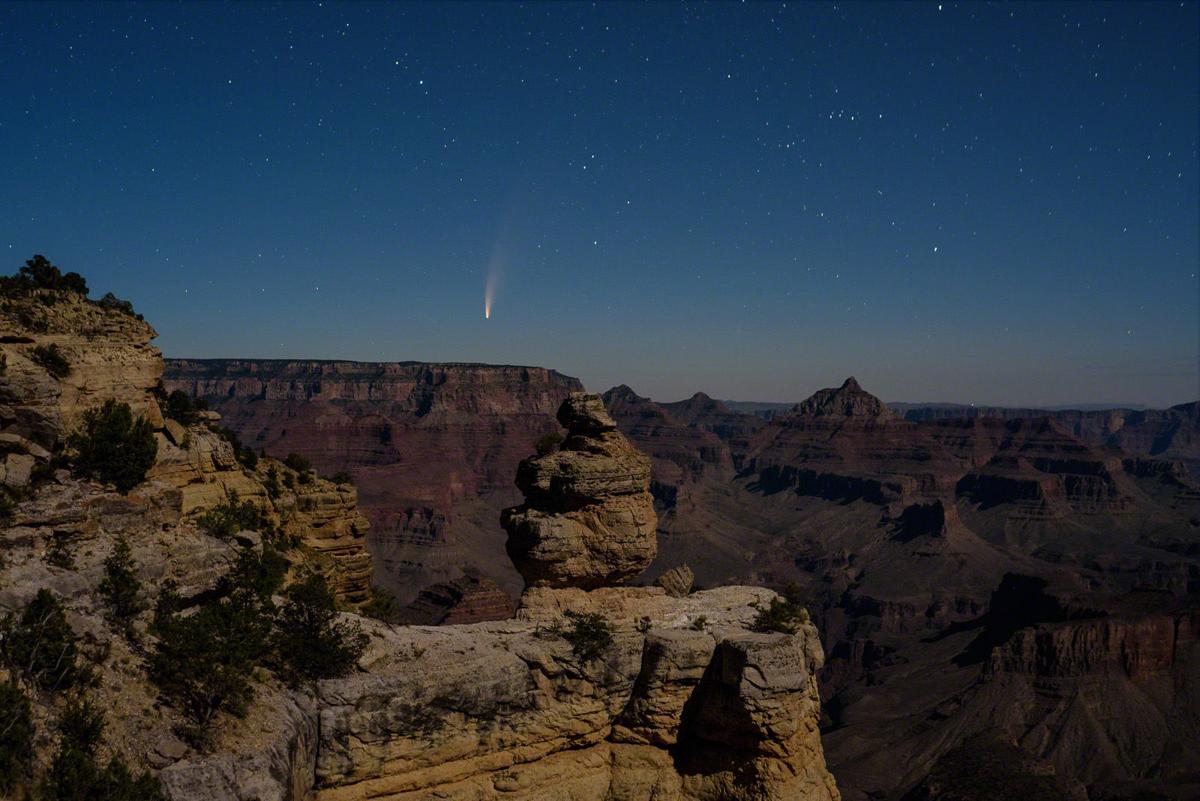 From the South Rim, Flagstaff photographer David Blanchard captured this image of the Neowise comet rising above the Grand Canyon walls. 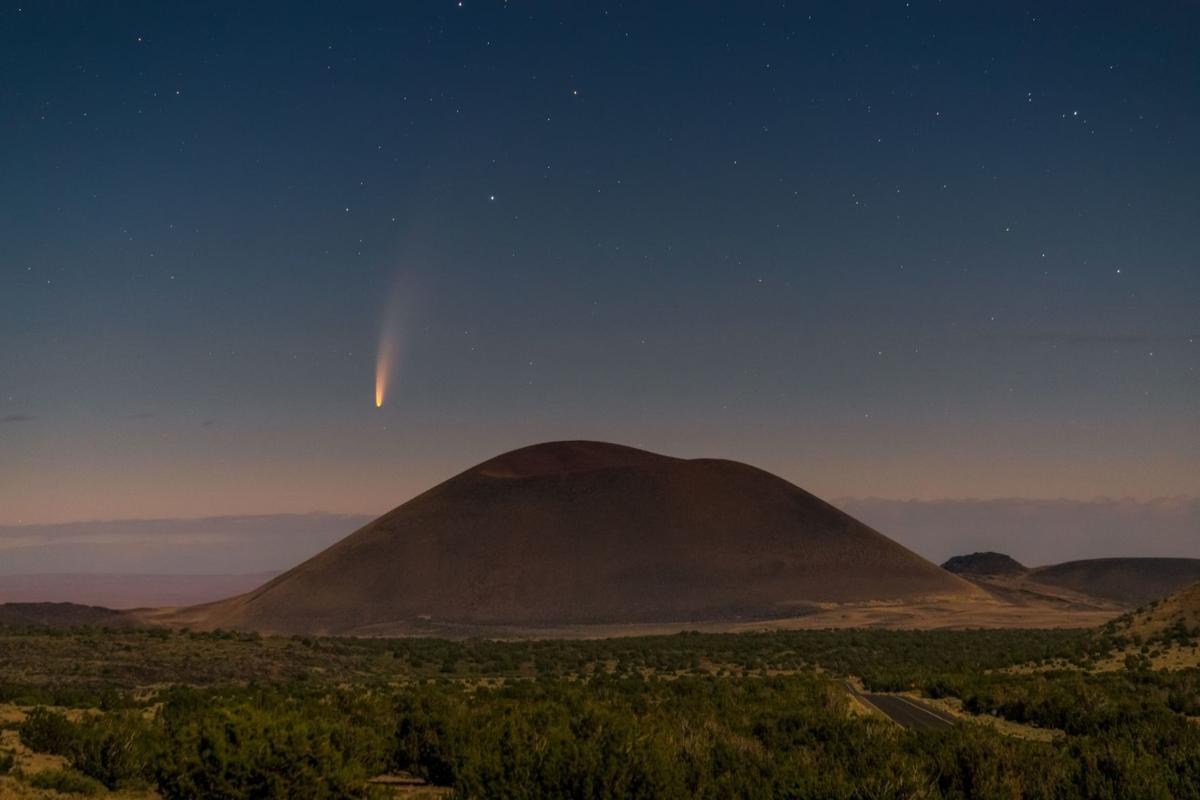 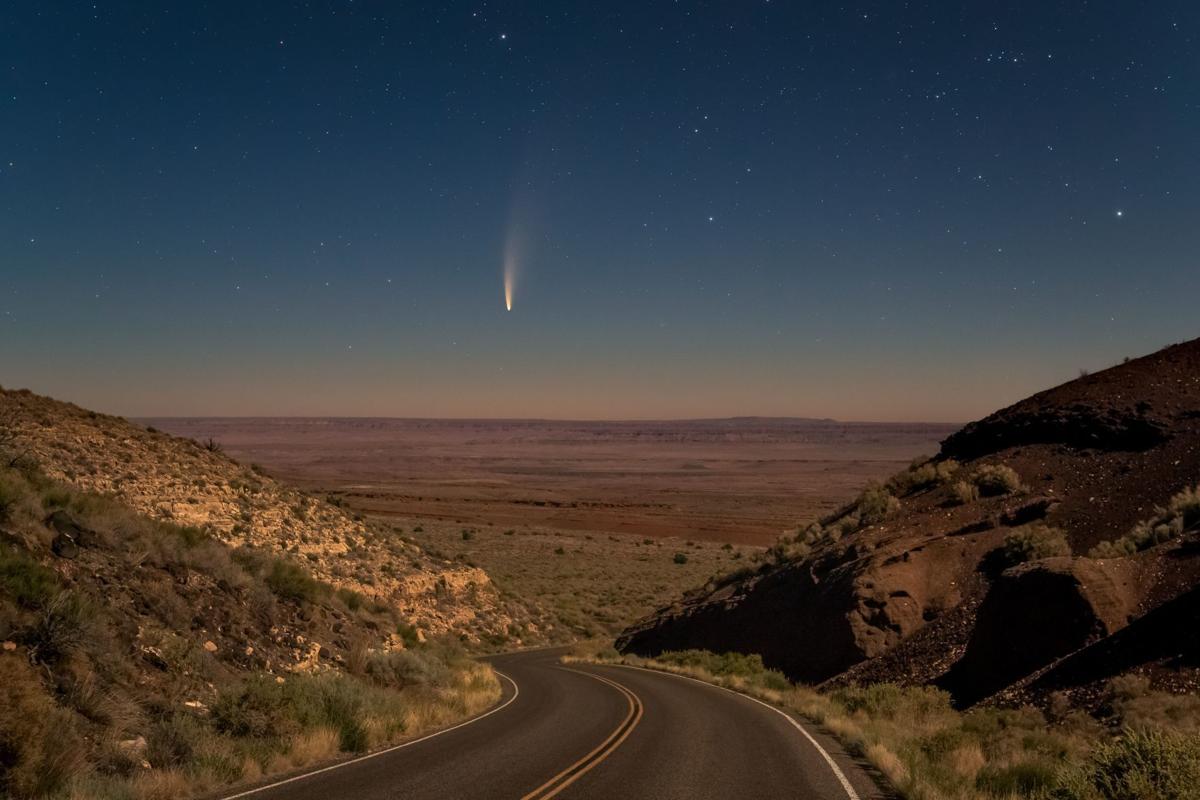 Shot by Jeremy Perez  from alongside the Sunset Crater-Wupatki Loop Road, this image of the Neowise comet is framed amid the Wupatki Basin. 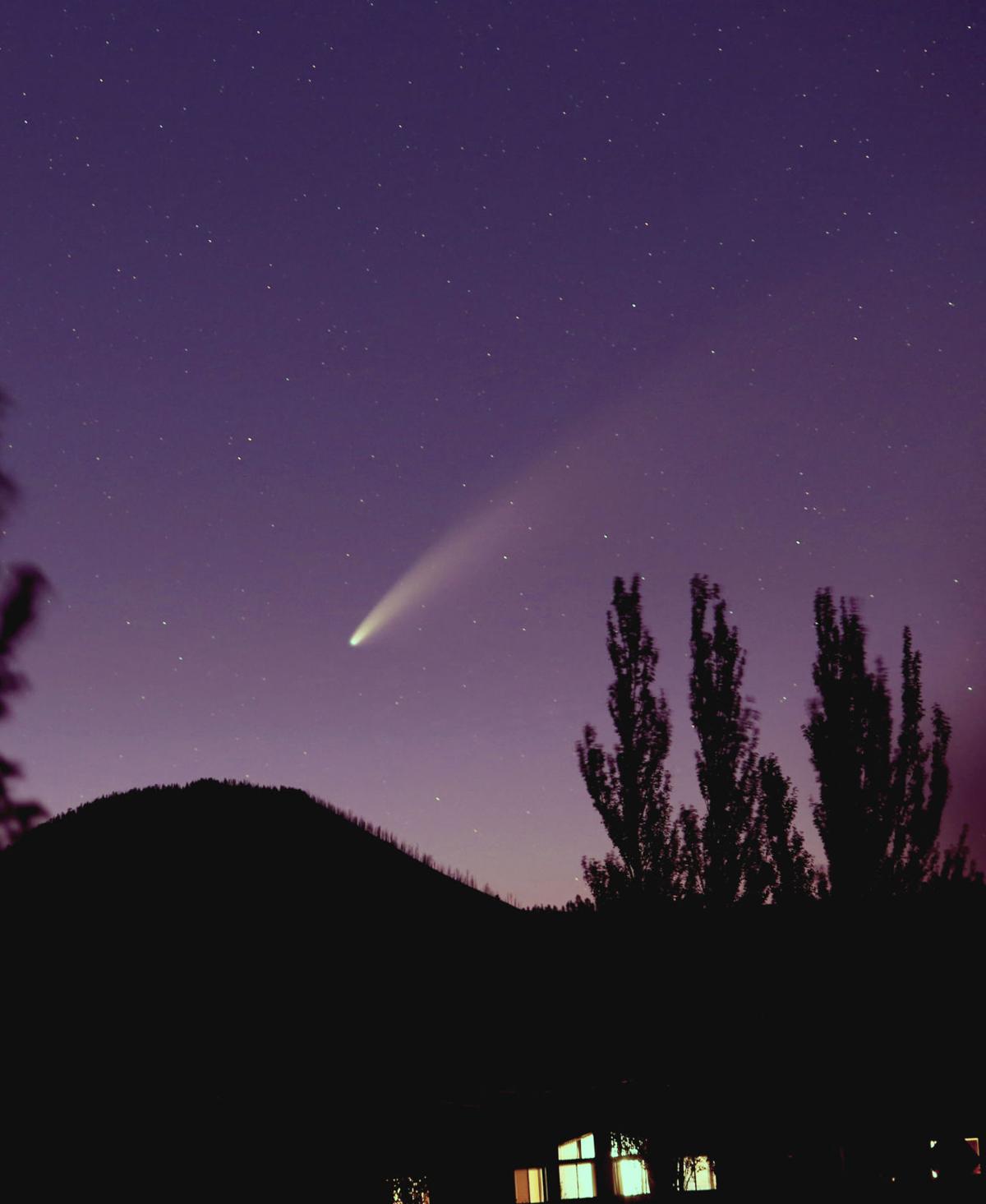 Klaus Brasch sent in this photo of Neowise from his backyard in Timberline, taken with a Canon 6D and a 135 mm telephoto lens around 8:30 p.m. earlier this week.

A streaking comes across the sky. Every predawn, earlier this month, it has flashed on the horizon. And now, it arrives around dusk, in the twilight, brightening the firmament with a spectacular blaze of light and a wondrous tail of cosmic dust.

The Neowise comet certainly has not gone unnoticed, or undocumented, in the famously dark-sky community of Flagstaff. Everyone from astronomers to professional astro-landscape photographers to avid amateurs with cameras on tripods to just regular folks with high-powered binoculars have spent much of July gazing upward at the latest comet to grace our corner of the solar system.

Until recently, you had to be an extreme early-riser to catch this dazzling diurnal display. Sightings were brightest some two hours before dawn, in the northeast sky. But, in something of a break for those not morning people, for the past week or so, Neowise has been evident to the naked eye in the early evenings in the northwest sky.

In these restrictive coronavirus times, when so many events have been canceled and entertainment options limited, the arrival of the Neowise comet amounts to the Super Bowl of stargazing. (Yes, we know it’s a comet, not a star, but you get the point.) So its appearance has spawned something of a new, social-distancing-safe hobby for folks — pointing the lens skyward and snapping away.

“People are pretty excited to realize there’s something like this occurring,” said Flagstaff’s Jeremy Perez, an avid astrophotographer (as well as storm-chasing shooter), who has been documenting the comet’s path on social media. “It’s been quite a while since we’ve had something so readily visible to the naked eye, as far as comets go, especially in the Northern Hemisphere.”

Perez and friend and fellow photographer David Blanchard have been among the dedicated souls who think nothing of awakening at 2 a.m. and hieing out to remote sites to frame just the right shot when the comet emerges around 3 a.m.

“It’s not going to happen again,” said Blanchard of the early wake-up calls, “so you deal with it. I don’t think it’s (crazy). It’s what I like to do.”

And it is, in fact, a rare occurrence — or, at least, something that flashes into our consciousness about every decade or so.

The Neowise comet — so named because it was first detected by the NASA space telescope called the Near Earth Object Wide-field Infrared Survey Explorer (NEOWISE) — debuted its light show on July 3, when this chunk of outer-solar-system ice soared past the sun and released gases to form its dust tail. Rather than fade into nothingness so close to the sun, the comet shined on. And it’s kept doing so all month, visible for those of us in the Northern Hemisphere.

Consider the early-morning viewings something of an off-Broadway run for Neowise. Now, it’s hit prime time by being visible in the early evenings. Soon, according to Scientific American, it will be moving from the constellation Lynx toward the Big Dipper. “On July 22,” the magazine reported, “the comet will reach its closest point to Earth — a distance of 103 million kilometers — before continuing its cosmic flight. Whether it will still be visible to unaided eyes by then is uncertain, however.”

Given Neowise’s uncertain booking in our sky, photographers and astronomy buffs haven’t hesitated in going out every morning (and, now, evening) and clicking away.

“I was able to see many years ago, back in the late ‘90s, the Hale Bopp (1997) and Hyakutake (1996), and they were just spectacular naked-eye comets,” Perez said. “But at the time, that (astrophotography) wasn’t my thing. I didn’t try to document them that way. Since I’ve gotten into amateur astronomy, I’ve just felt, ‘Aw man, what a missed opportunity.’ When we realized this was coming around the sun and still intact, and it was bright, I wanted to try and capture this.

“Right now, while our monsoon is on pause and haven’t had clouds blocking us, so OK, we can do this.”

It’s not as simple, of course, as wandering out to the driveway, setting the camera on a tripod and shooting. Photographers such as Blanchard and Perez use apps (Stellarium, Starry Night Pro are two) that give them precise coordinates for where the comet will be at any given moment.

“It also gives the elevation above ground for each moment, so I know exactly where I should be looking,” Blanchard said. “It’s that precise.”

The pair makes it sound — dare to say — easy?

“It’s not harder or easier, just different,” Blanchard said. “First, when you’re dealing with summertime monsoons, you’re almost always dealing with daylight with a lot more light to work with. With these comets, it’s dark skies, so you have to do much longer exposures. The problem you have is, as the exposure gets longer, the stars are moving — actually, the Earth is moving but the stars will make streaks — so you can’t go too long. A large number of short exposures can be combined to give you the same amount of light as a single long exposure.”

Combining a half dozen or so of short exposure shots -- known as “stacking” in the vernacular -- eliminates fuzziness and star movement, what Perez calls “noise.” Using Photoshop, Perez will align the different, though almost instantaneously shot, photos.

“You realign and de-rotate those stars back into each other, and when you layer them together, it averages out that noise,” Perez said. “All the actual real signal (images) — the comet, the stars — remain; it just smooths out the roughness in color, contrast and clarity.”

Other apps, Blanchard said, allow photographers to “pull the image apart and separate it into ground and sky and then combine them.”

Hence, you see the vivid, gorgeous nighttime photos, landscape lit in the foreground, comet soaring overhead in the inky blackness.

Yet, it still takes much expertise and doggedness to get the right shot. On July 8, for instance, Perez posted to his Twitter feed a stark and beautiful photo of the comet rising over the Schultz Fire burn scar along the eastern slopes of the San Francisco Peaks.

What people didn’t know was the effort it took to capture the image. He had to set out from his home close to 3 a.m., barrel down Elden Springs Road and then turn off onto the rough and rutty Schultz Pass Road in the pitch dark, find the exact spot where his app was sending him, then set up his tripod amid maybe a 30 mph wind gust.

“When this thing (the comet) is first rising, there is no twilight yet and it’s really hard to compose through the viewfinder,” Perez said. “You change zoom, recompose, refocus. It’s a 10- to 15-minute process.”

Blanchard said he got lucky after driving all night to set up on the south rim of the Grand Canyon for a stark and epic shot of the comet blazing above the canyon.

“We had a bright moonlight that night,” he said. “Normally, you wouldn’t want that. But the moonlight lights up the canyon. If there was no moon then, the canyon would be in silhouette and not be interesting. So it worked out pretty well.”

It sometimes only takes one example to disrupt a theory, says Lowell Observatory astronomer Kyler Kuehn, one of the collaborators on an intern…

From the South Rim, Flagstaff photographer David Blanchard captured this image of the Neowise comet rising above the Grand Canyon walls.

Shot by Jeremy Perez  from alongside the Sunset Crater-Wupatki Loop Road, this image of the Neowise comet is framed amid the Wupatki Basin.

Klaus Brasch sent in this photo of Neowise from his backyard in Timberline, taken with a Canon 6D and a 135 mm telephoto lens around 8:30 p.m. earlier this week.