Watch now: Biden and Trump face off in their final debate

Flagstaff nonprofits, charities, other groups struggle to fill void due to coronavirus
0 comments
Share this
{{featured_button_text}}
1 of 2 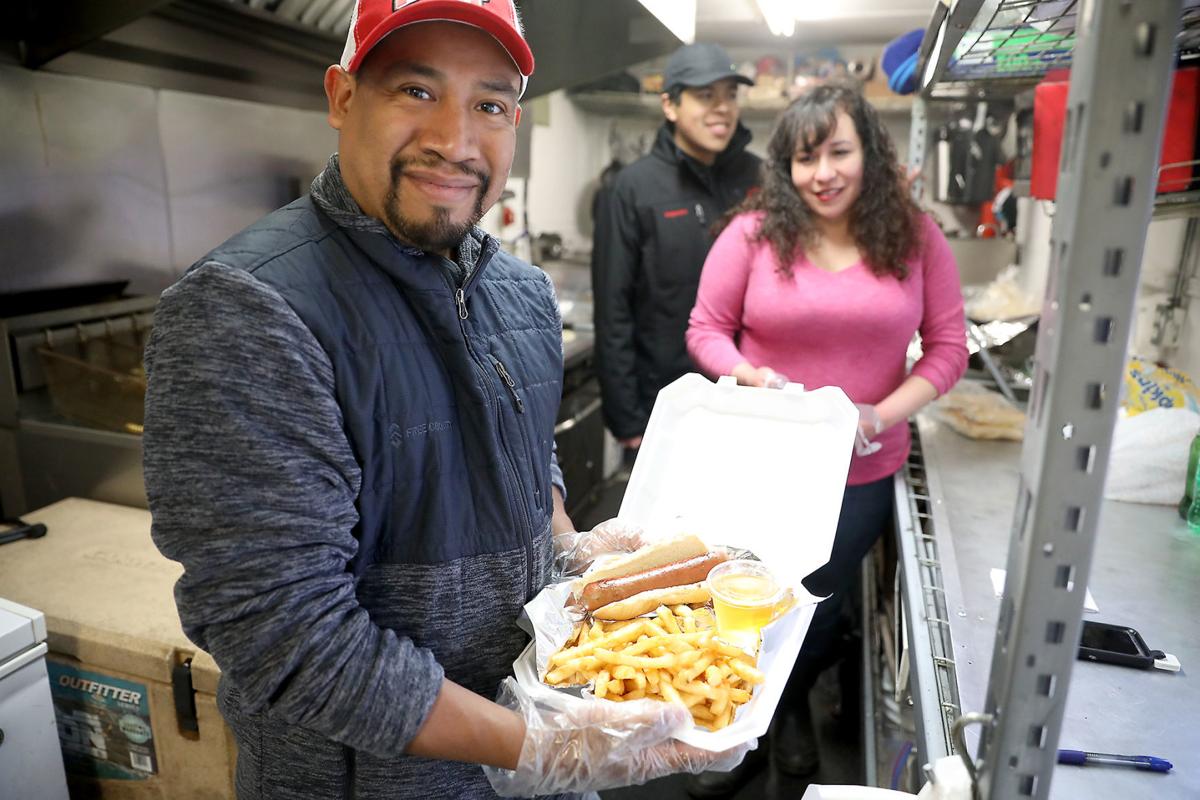 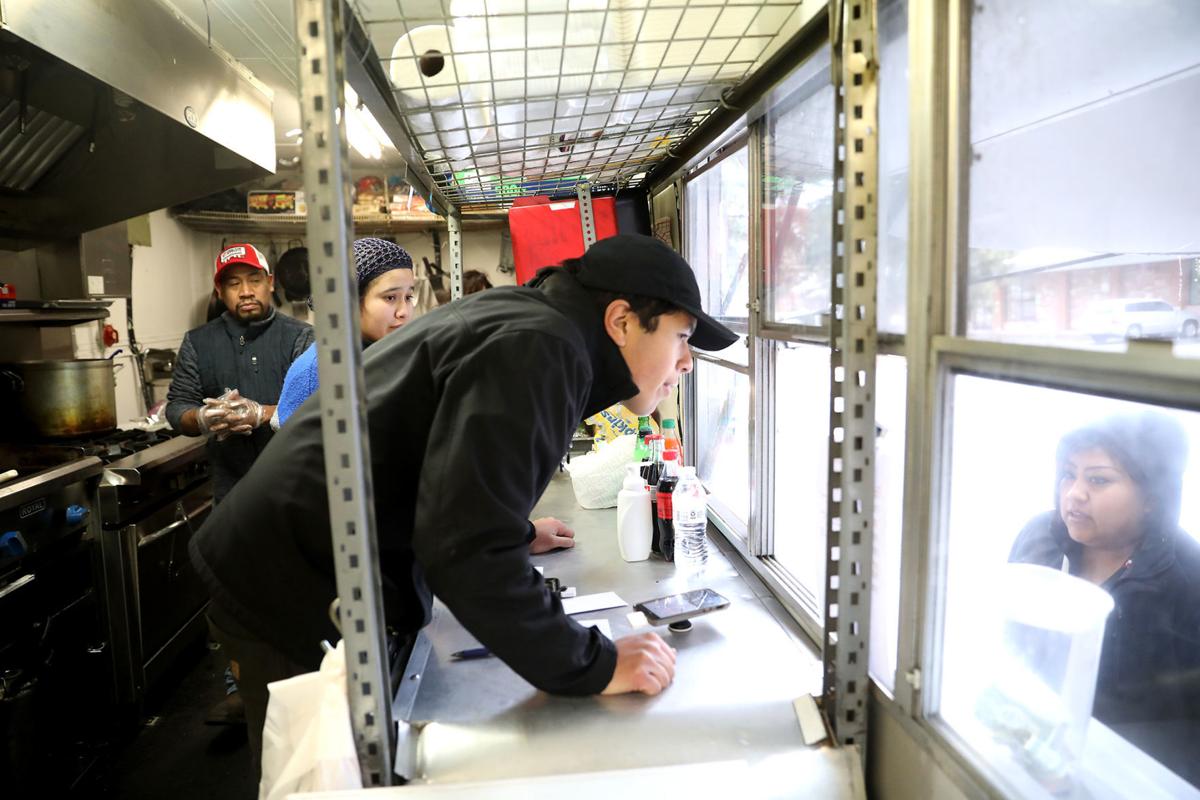 Alejandro Quintero, the namesake of the Alejandro’s restaurant and food truck, takes an order Wednesday afternoon. Customers are donating to a fund to enable Alejandro’s to provide free food to children who would usually eat free lunch at school.

Katherine Romero and Georgette “HQ” Quintero, the owner of Alejandro's Mexican Food, were hard at work Wednesday raising money and making lunches for the hundreds of Flagstaff students who won’t be receiving meals as part of school lunches this week.

With classes canceled, so too are the free lunches that many children rely on as potentially one of the only meals they eat each day.

The school district announced Wednesday that beginning next week, students will be able to pick up lunch and breakfast at several locations, but Romero and Quintero said they are hoping to help fill the gap until then.

With Romero gathering donations to pay for food, and Quintero and her employees donating labor, they say they are hoping to get free or cheap lunches to kids, potentially for weeks.

By the end of Wednesday, they had received about $1,200 in donations, which she said should allow them to provide about 400 free meals to kids.

“This turn of events is just overwhelming,” Quintero said of the coronavirus crisis. But she added the warmth they have seen from the community and those who have donated are amazing.

The two women are not the only ones working diligently to help those who have been hardest hit by the closures of schools and businesses.

While some nonprofits report primarily needing volunteers, for others the crisis has them in desperate need for additional funding and donations in order to stay operational.

Monica Foos, executive director of Flagstaff Family Food Center, said they had about 360 vehicles come through picking up emergency food boxes on Tuesday, about three times their daily average. In practical terms, Foos said while they normally go through about three pallets of food to create all those boxes, on Tuesday they gave away eight pallets worth of groceries.

And Foos said with so many businesses closed, and some workers either laid off or seeing hours cut due to the virus, she said they expect to see many more new faces coming to them for help.

So many families in Flagstaff are living paycheck to paycheck, Foos said, and this crisis is going to show what that really means.

Foos said she is encouraging people to come to them for food as soon as they learn their income may be affected. That way residents can put their money toward other expenses such as rent for which they may not be able to get relief.

Anyone is eligible to receive emergency food boxes twice a month and the center will not ask for anyone’s income, any ID or zip code, Foos said. They do ask for the number of people in the household receiving a food box and everyone’s age, information that Foos said helps them continue to get supplies and funding.

Ross Altenbaugh, executive director of Flagstaff Shelter Services, said they are also gearing up for a busy but uncertain future and are working to bulk up the number of staff they have.

The word they are getting from the federal government is that shelters such as theirs could see as many as 15% to 35% of their staff members contracting the virus. And that means they need to staff up in order to cover any employees who may become ill and need to go into isolation.

Altenbaugh said it’s difficult as the entire globe is quarantining at home but the people they are helping simply don’t have that option.

On top of that, just like Foos, Altenbaugh is expecting the economic downturn caused by the virus to mean even more people finding themselves without homes as they can’t make rent and are evicted.

Meanwhile, Altenbaugh said they have seen several painful lapses in revenue since the crisis began, making everything more challenging. For example, some grants they had applied for have fallen through as organizations cancel the meetings to review proposals.

Altenbaugh said they also may be forced to cancel their annual fundraiser in May, which can bring in as much as $125,000 to support the organization. And all this comes as their savings are already low due to the shelter’s recent expansion, completed just two months ago.

“Without additional help, this isn’t sustainable,” Altenbaugh said, adding they are telling donors this is their rainy day and it is pouring.

Still, Altenbaugh said she has been encouraged by the number of local leaders proactively reaching out to her and has spoken to representatives at the federal level about their needs.

“What I do know is locally, our community gets it, and what I’m hearing from our senators and representatives is that they are hearing that and are working to address these [concerns in the legislation targeting the crisis],” Altenbaugh said.

At the Sunrise Mission, Executive Director Kathie Knapp said their largest concern is whether they will have enough food to keep their downtown soup kitchen open.

Traditionally, the mission has received the majority of its donations from grocery stores that give away food that is edible but cannot be sold for one reason or another, Knapp said.

Annually, Knapp said they receive about 97 tons of food each year from grocery stores, which helps them provide as many as 350 meals a day. Those meals are for the 65 women and children who call Hope Cottage home and the residents of Sunrise Mission as well as anyone else in need of a free meal downtown.

But because of the crises, food isn’t staying on the shelves long enough for grocery stores to simply give it to them, Knapp said.

At the moment, she said they have enough food to keep the kitchen open until Friday, but if they are not able to get help, they will have to end that program, Knapp said.

She said to prevent that, they are looking for donations from church groups and residents of the city.

“Donations of food goods would be wonderful; monetary donations would be incredible,” Knapp said.

Both Coconino and Kaibab National Forests are changing procedures and, in some cases, closing areas in response to the coronavirus.

Since announcing the first presumed case of COVID-19 in Coconino County Wednesday evening, seven more cases have been identified.

Downtown Flagstaff businesses, hit hard by coronavirus, band together to strike back

Between coronavirus social-distancing measures and the start of a snowstorm, downtown Flagstaff streets on Wednesday were, if not bereft of pe…

Stuck at sea but living large: Flagstaff residents kept on cruise for 27 days

Imagine, in this fraught time of coronavirus contagion, being aboard a cruise ship, seemingly adrift at sea somewhere in the South Pacific and…

In response to the now-extended school closures following the COVID-19 outbreak, Flagstaff Unified School District will be providing free brea…

Alejandro Quintero, the namesake of the Alejandro’s restaurant and food truck, takes an order Wednesday afternoon. Customers are donating to a fund to enable Alejandro’s to provide free food to children who would usually eat free lunch at school.