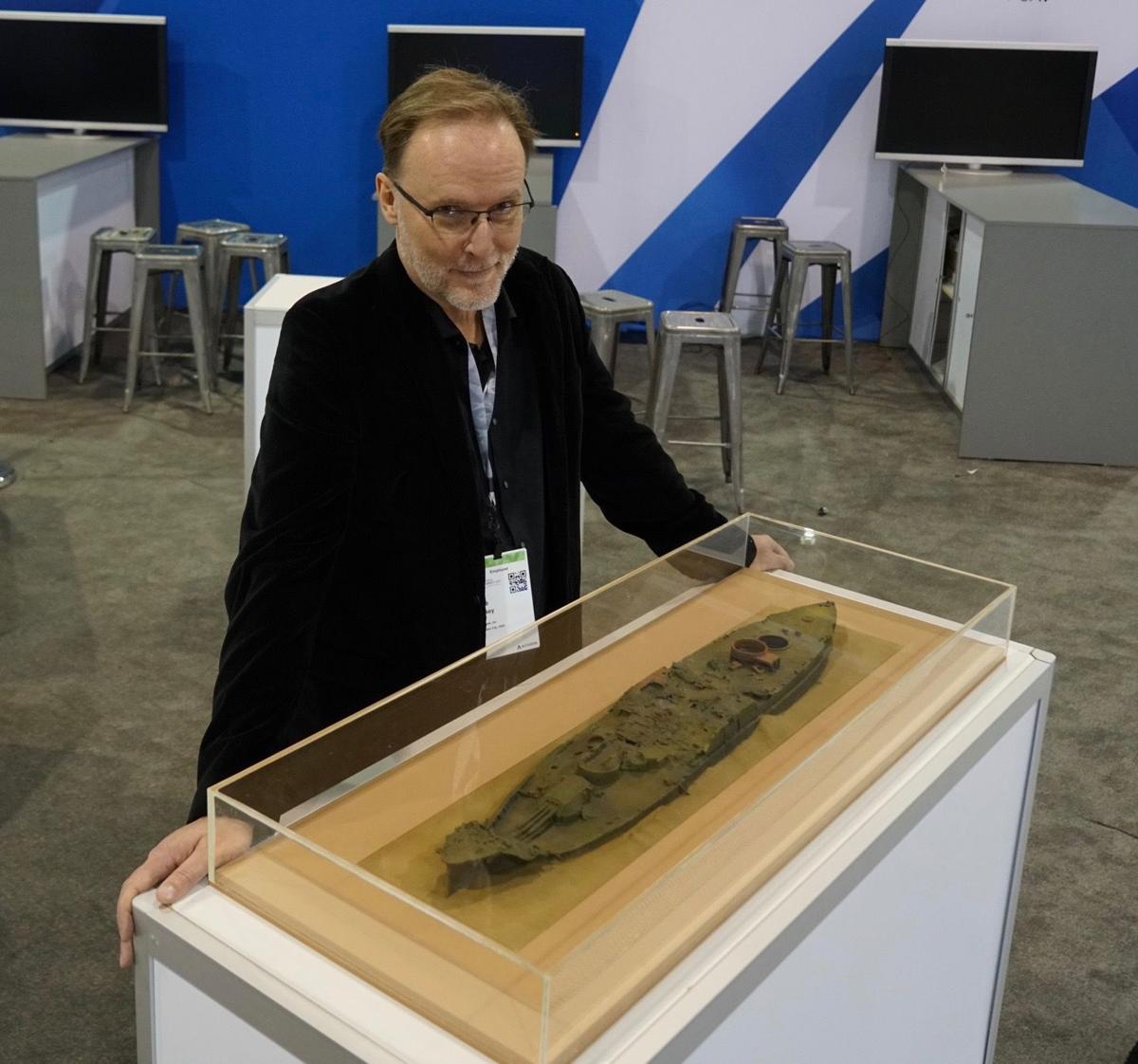 Pete Kelsey stands with a 3D model of the USS Arizona. Kelsey led a team that undertook a detailed technical survey of the wreck for the National Park Service. (Courtesy photo) 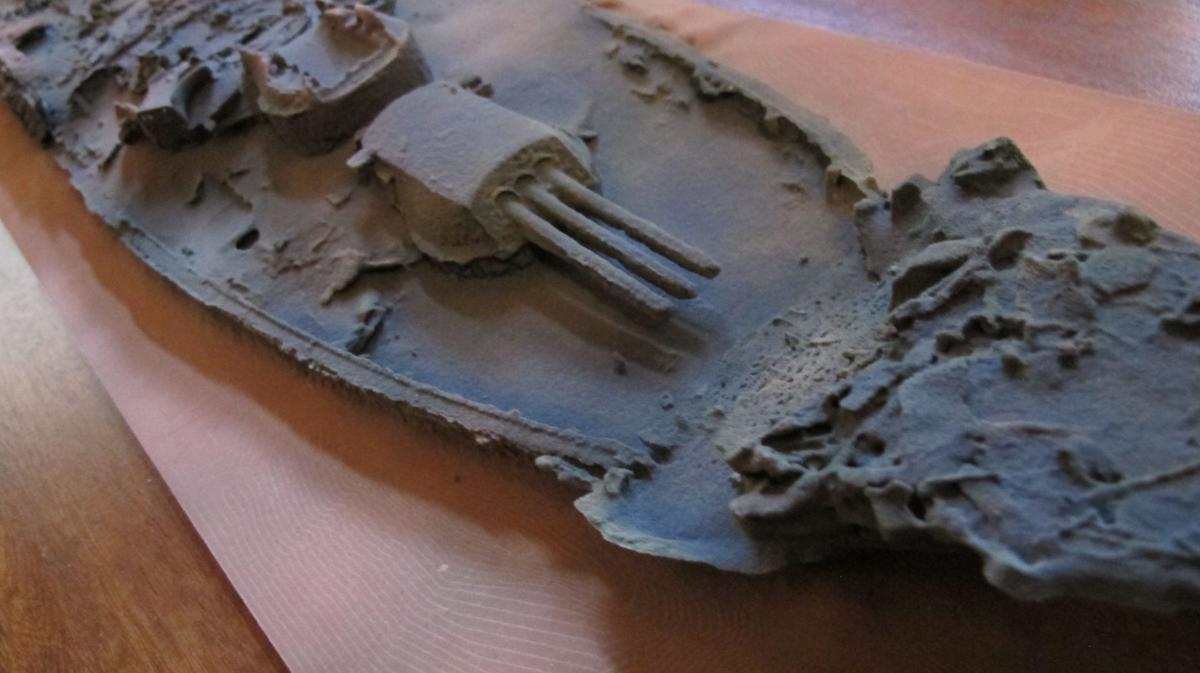 A closer look at the 3D model of the USS Arizona. (Courtesy photo)

Flagstaff’s Pete Kelsey isn’t old enough to have served on the USS Arizona, one of the ships infamously sunk by the Japanese during the attack on Pearl Harbor, Hawaii, on Dec. 7, 1941. Nevertheless, Kelsey is probably more familiar with the physical contours of the ship than almost anyone on earth. For three years, Kelsey led the team that generated a detailed 3D digital image of the wreck as it looks today. In addition to a lot of technical work, Kelsey’s involvement also included many scuba dives to the wreck and working closely with the five remaining survivors from the ship.

Kelsey manages special projects for a large software company called Autodesk. In 2012, Autodesk was approached by the National Park Service (the USS Arizona Memorial is part of the World War II Valor in the Pacific National Monument) and asked to take a close look at the Arizona. The wreck hadn’t been mapped in detail since 1984 and the Park Service wanted to know how it was faring. The ship sank within nine minutes of being pierced by a Japanese bomb. More than 900 of the sailors who lost their lives that day remain entombed in the wreck. As such, it is considered sacred ground and any interaction with the wreck demands a high level of respect and deference.

Sitting on the sea floor for 75 years has changed the USS Arizona. The sea is a dynamic environment and the years have subtly changed the physical remains of the ship. In order to maintain the memorial and preserve the history it represents, the Park Service needed to know the condition of the wreck.

“The place has to be maintained,” Kelsey said. “A structural collapse is unthinkable.”

Kelsey, a veteran, an Arizona resident and a self-described “technical geek”, was immediately attracted to the project, especially the academic challenges the undertaking presented. That interest, however, was soon overshadowed with a deep sense of purpose and reverence for the memorial.

For the 1984 survey, Park Service divers “went down with grease pencils and measuring tape,” Kelsey said. In 2012, Kelsey and his team began a much more technical look at the ship

“I led a team that basically repeated that 1984 process but with state of the art technology,” he said.

The technology they employed included sonar (mapping with sound), lidar (the use of a pulsated laser to measure distances) and photogrammetry (using photography to measure objects and distances). “We combined the three into a three dimensional color digital model of the ship.”

The data collected by Kelsey and his team will now serve as a baseline with which to compare all future surveys. In fact, it has already served that purpose as the team conducted a secondary survey in August. Kelsey is in the process of comparing the August findings to the team’s original data, looking for things like changes in the size of cracks.

Right now, Kelsey is in Honolulu to attend the ceremonies marking the 75th anniversary of the attack. It is the culmination of three years of a job that evolved into much more than the original task had suggested.

“This is just the most meaningful work I’ve ever done,” he said in a phone interview from Honolulu. Over the course of the project he has come to know all five of the remaining survivors and formed a friendship with survivor Don Stratton. Stratton recounts his dramatic survival on Dec. 7, 1941, in his book, “All the Gallant Men.”

Stratton is 94 years old and in relatively good health. But Kelsey knows that this year’s anniversary event will be one of the last to include the men who were there on that bright Sunday, 75 years ago. As a gesture of respect and gratitude, Kelsey and his team will present each of the five survivors with a 3-foot-long 3D printed model of the ship. The 3D models are a tangible reminder of the tragedy and of the passage of time at the bottom of the ocean.

Kelsey describes the models as “hyper-real,” including details like a Coke bottle on the deck and an abandoned cooking pot resting near the galley. It was the cooking pot that cemented his friendship with Stratton. Kelsey had been showing Stratton images from the project without much reaction. Then he handed him a 3D print of the cooking pot.

“I’ll never forget that moment as long as I live,” Kelsey said. “He got emotional, he started telling stories about that day and where he was.” Kelsey himself is full of emotion at the retelling of the story.

After Wednesday's ceremonies, Kelsey’s USS Arizona project will be over. But he will never forget the contours of that doomed ship and will continue to bear witness to the stories of its survivors.

He said his association with the USS Arizona was “a thrill, an honor. It’s hard for me to even call it work. It gives me goosebumps talking about it really.”

Pete Kelsey stands with a 3D model of the USS Arizona. Kelsey led a team that undertook a detailed technical survey of the wreck for the National Park Service. (Courtesy photo)

A closer look at the 3D model of the USS Arizona. (Courtesy photo)