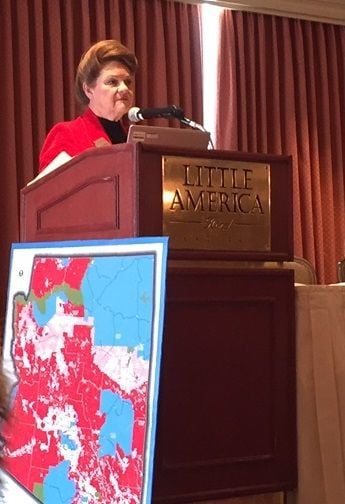 State Rep. Brenda Barton speaks about the concept of transferring federal public lands into state hands at the annual meeting of the Arizona and New Mexico chapters of The Wildlife Society on Friday in Flagstaff. 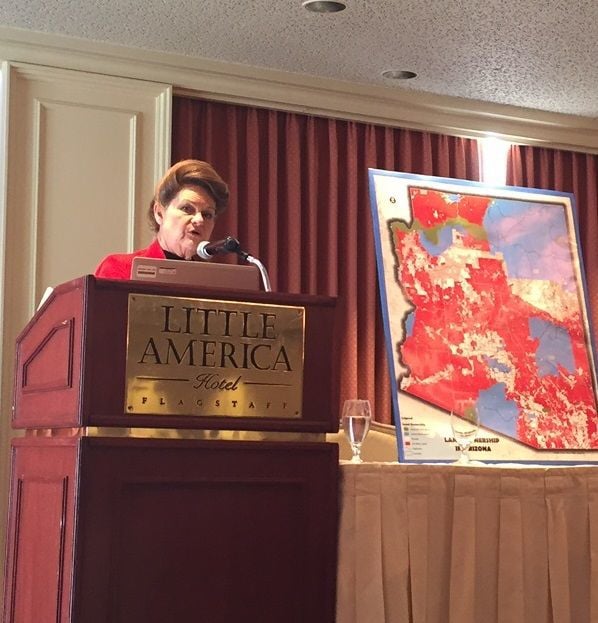 State Rep. Brenda Barton speaks about the concept of transferring federal public lands into state hands at the annual meeting of the Arizona and New Mexico chapters of The Wildlife Society on Friday.

The debate about federal public lands control that fueled the armed standoff at Oregon's Malheur National Wildlife Refuge was at the center of a conference of wildlife scientists and managers in Flagstaff on Friday.

“Who Will Manage the Future of Our Public Lands?” was the subject of the plenary session of the annual meeting of the Arizona and New Mexico chapters of The Wildlife Society, hosted at Little America Hotel.

The discussion jumped between revenue generation on public lands, what it takes to manage those acres and the legal foundations of the current ownership system.

While the concept of transferring millions of acres of federally owned lands into state hands faces a mountain of legal and constitutional hurdles and has repeatedly been shot down in Arizona, it’s a topic that can’t be ignored, many at the session said.

And regardless of whether they have legal ground to stand on, state takeover advocates have inspired action by some citizens, armed or otherwise, that end up affecting public lands and access to public lands, Davis said

There is a need for discussion about how collaboration on public lands issues can be improved, but the current debate over transferring federal lands is "freezing federal agencies in terms of their ability to move forward on land management,” said Ethan Aumack, conservation director with the Grand Canyon Trust.

A vision for state control

Barton is the chair of the Legislature's transfer of federal lands study committee, created last spring after Gov. Doug Ducey vetoed two bills that required the federal government to turn over public lands to the state.

The committee is charged with studying the feasibility of putting federal lands into state control, identifying concerns and risks associated with that concept and coming up with a structure for how it would work. The group must come up with a final report of its findings by 2019, Barton said.

Fielder, another advocate of public lands transfers, also pointed to studies and testimony from Montana that concluded federal land management agencies lack the resources to adequately oversee public lands. That, she said, has resulted in massive wildfires and unhealthy forests, among other impacts.

Fielder said supporters of a federal public lands transfer are advocating both legislation and litigation, centered on the property clause in Article 4 of the Constitution, to further their cause.

But it is exactly the same constitutional clause, as well as the supremacy clause in Article 6 of the Constitution, that conservation attorney Cyndi Tuell said solidly refutes any argument that the states have unilateral authority to transfer lands into their control.

“If we want to ignore 200 years of jurisprudence, we should probably give the land back to the original owners who have the best claim to that land,” Tuell said, pointing to a map showing the original territories of the country's Native American tribes.

Another problem with the arguments of federal land transfer proponents, said Todd Leahy, director of conservation with the New Mexico Wildlife Federation, is there are too many “ifs.”

“They believe that a state's revenue might exceed management costs if large-scale transfer occurred, if the feds yield all current and future revenue, if the states maximally exploit those resources, if petroleum mineral and timber prices remain high, if they can find markets if they can compete in a global marketplace,” Leahy said. “All those ‘ifs’ aren’t exactly reassuring.”

Benefits of the system

Leahy and several other presenters advocated for collaboration among various agencies as the best, most rational way to resolve public lands issues.

Hattenbach, regional director of rangeland management with the Forest Service’s Southwestern region, gave several examples of that collaboration such as the Four Forest Restoration Initiative and the Southwest Jemez Collaborative Landscape Restoration Project.

This debate over what entities should own public lands and how they should be protected or used for economic benefit has been going on for well over a century, Hattenbach said.

He didn’t take a position on the transfer concept, but outlined potential liabilities and considerations related to federal lands that states taking on that property would have to consider, such as legacy contamination and restrictions on land use related to things like critical habitat for endangered species.

He also addressed the federal money that flows into states because of their public lands. Each year, the Forest Service spends about $115 million managing Arizona’s national forests, while the federal government pays states millions of dollars annually to compensate them for tax-exempt federal acreage, which would disappear if those lands were transferred. Arizona has received about $45 million annually in recent years under those payment programs.

Hattenbach reviewed the federal dollars spent on fighting wildfires in Arizona as well, which have ranged from $18 million to $206 million per year over the past five years. The cost to put out the Slide fire alone was $10.1 million.

There’s also the public comment process that is in place for decisions made about public lands that wouldn’t apply to state lands, said Alicyn Gitlin, the Sierra Club’s Grand Canyon Program coordinator.

“I’m not always happy with the job that is done (by the federal government) but at least I have confidence that public input is accepted,” Gitlin said.

Gitlin also made the point that public opinion polls have consistently shown that people support public lands and don't want to see them go under state control.

Barton brushed off the results of the poll, suggesting that the public misunderstands the mechanisms and benefits of such a land changeover.

“I’m not always happy with the job that is done (by the federal government) but at least I have confidence that public input is accepted.”

Oregon occupier hailed at funeral as hero.  A4

Due to the Rafael Fire, the Coconino County Sheriff's Office has upgraded the area's of South Garland Prairie, Pine Aire Estates and residents…

On June 21, Coconino National Forest announced a full closure of the forest beginning Wednesday, June 23 -- the first time that has happened s…

Many in Flagstaff knew her as an outspoken activist, a passionate community member and a beloved friend. But to her two siblings, Joanna Wheaton will always be remembered as the “older sister,” despite being a triplet.

One person died on a private rafting trip through the Grand Canyon, officials with the national park announced Tuesday.

At Civano in Flagstaff, a drag show that's anything but a drag

She strutted. She vamped. She flipped her platinum locks, tall and flowing, as if Amy Winehouse and Dolly Parton had collided in a hair salon.…

State Rep. Brenda Barton speaks about the concept of transferring federal public lands into state hands at the annual meeting of the Arizona and New Mexico chapters of The Wildlife Society on Friday in Flagstaff.

State Rep. Brenda Barton speaks about the concept of transferring federal public lands into state hands at the annual meeting of the Arizona and New Mexico chapters of The Wildlife Society on Friday.