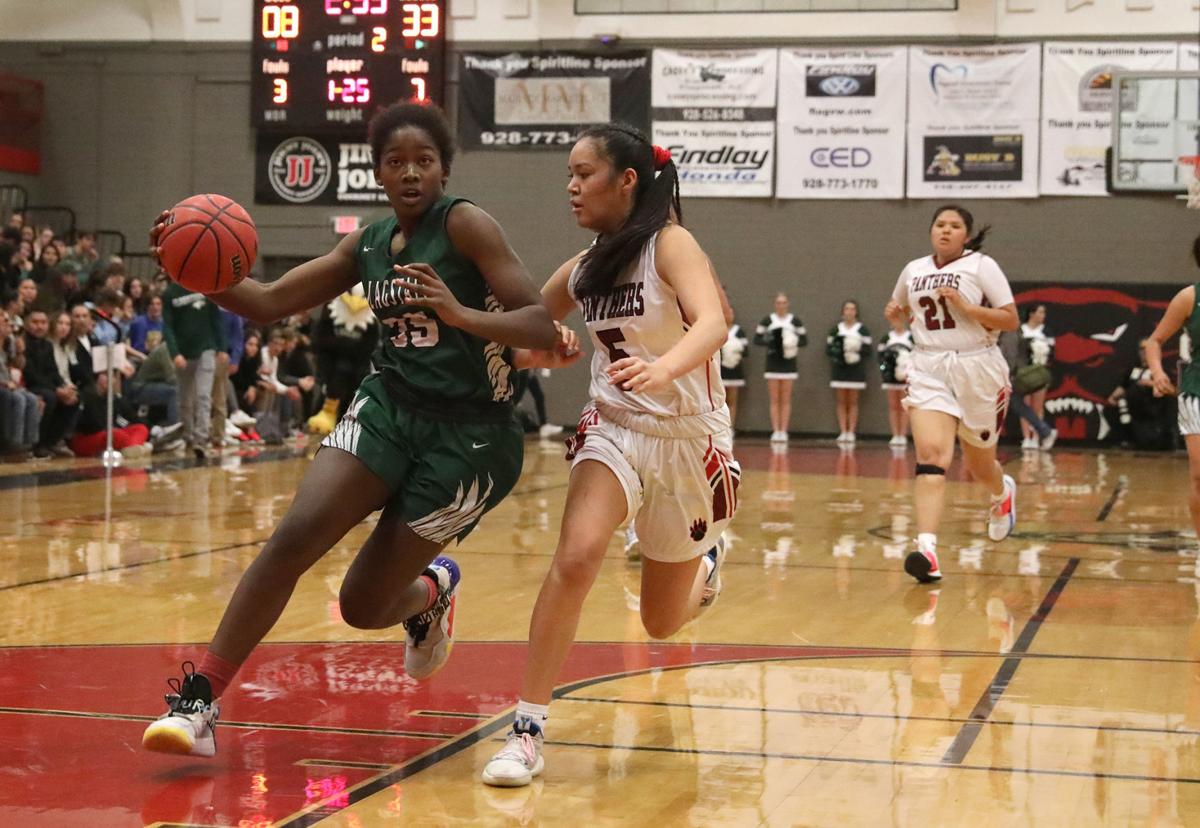 Coconino’s Kiana Manuelito (5) looks to steal the ball from Flagstaff’s Miyah Verse (35) as she drives the ball up the court Friday during a game at Coconino High School. 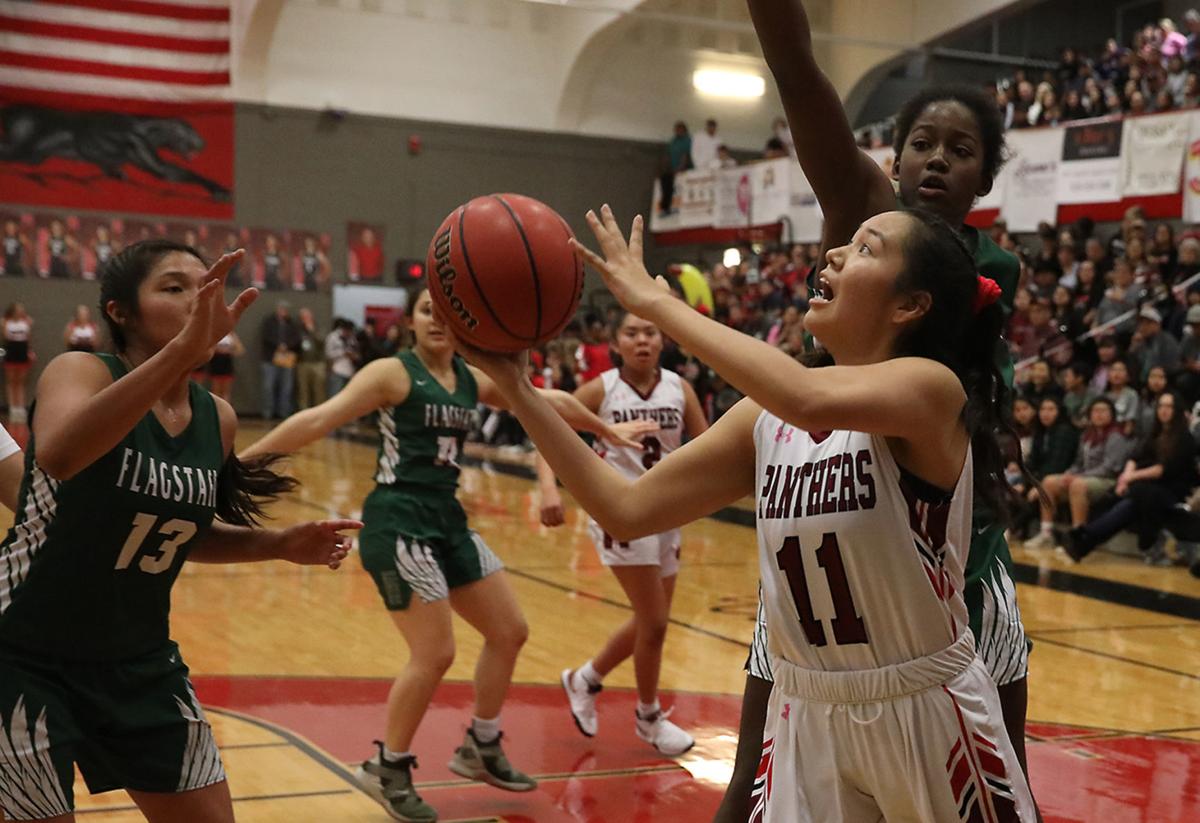 Coconino’s Kiara Manuelito (11) looks to take a shot Friday against Flagstaff during a game at Coconino High School. 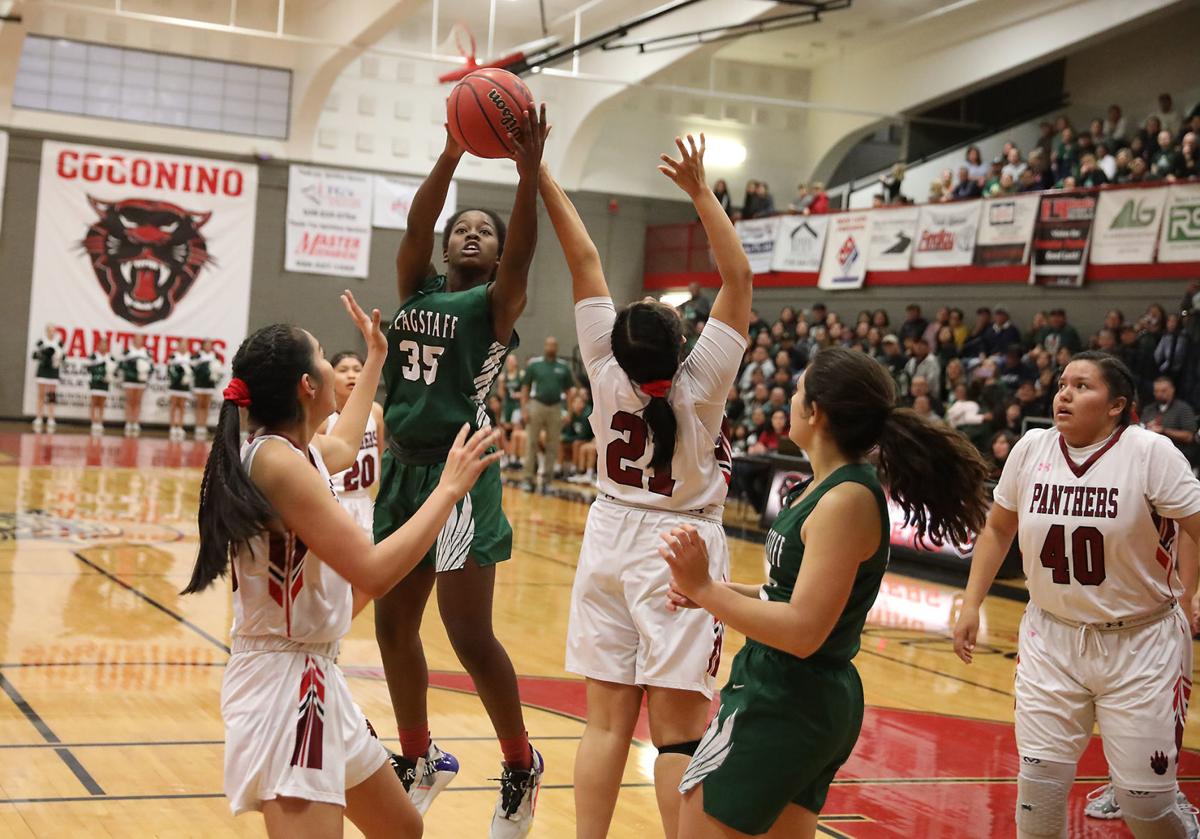 Flagstaff’s Miyah Verse (35) gets a rebound during a game against Coconino Friday at Coconino High School. 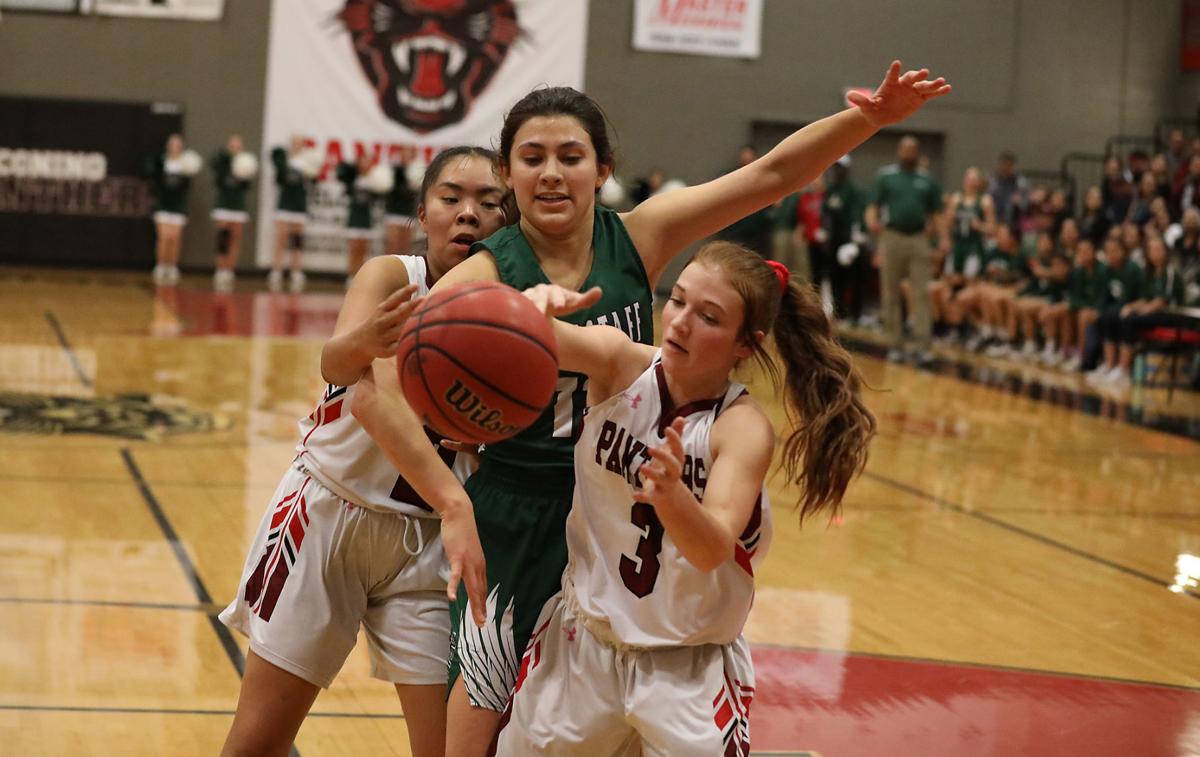 Coconino’s Elyce Palmer (3) fights for the ball during play against Flagstaff at Coconino High School on Friday night.

Coconino has some work to do if it wants the next crosstown meeting with Flagstaff to feel like a rivalry game.

Gracelyn Nez recorded a game-high 20 points and acted as a facilitator, Emma Doskicz added 11 and the No. 13 Eagles dominated the No. 12 Panthers, 68-38, on Friday at Coconino High School, remaining unbeaten in the Grand Canyon Region with the victory.

Both teams, in fact, entered the night with clean region slates.

"I think we did pretty good tonight, but we can do much better if we lock in and put our minds into it. We can do so much more," said Nez, who finished with three 3-pointers made.

Doskicz also had three buckets from behind the arc for the Eagles, winners of four of their last five regular-season outings. The senior's third-quarter trey made it 50-19, and was an immediate answer to Coconino's lone 3 for the night that came off the hands of Wynter Huskie.

The Eagles (7-3, 6-0 Grand Canyon) never trailed and shut down Huskie, often doubling up early in the game on the transfer sophomore guard who just recently became eligible to play for the Panthers (8-3, 5-1 Grand Canyon).

Coconino finished with 17 points from the free-throw line. Miyah Verse and Melinda Calnimptewa, playing her first game of the season, each finished with nine points for the Eagles, who put an end to Coconino's six-game win streak. Flagstaff led 44-13 at the half, and sat its starters in the running-clock fourth quarter.

Calnimptewa, a junior, played with 3A Conference Page last season when the Sand Devils won a second straight state championship. She drained a 3-pointer in the third quarter on a step-back move and her first field goal with the 4A Eagles came in the first quarter when she took advantage of an open lane for a layup that made it 13-2.

"I thought she made some plays, looked poised," Eagles head coach Tyrone Johnson said. "... I think she can be key for us down the stretch."

Nez pulled up early for her team's first bucket of the night, draining a 3 at the top of the arc. Later in the quarter, she found Doskicz for a catch-and-shoot long-range bucket.

Johnson said his team prides itself in putting points on the board to go along with a strong defensive effort. The combination was locked together on Friday, as Flagstaff beat the Panthers by 30 points for the second time in the past three regular-season meetings.

"I was pleased with the way we came out, in the sense of our offense's ability to hit shots. I liked how Gracelyn came out aggressive, looking for shots, and if she's shooting and hitting, she is also going to facilitate," Johnson said. "She's a tough guard."

Coconino didn't score until less than two minutes were left on the clock in the second quarter and snapped the drought with a free throw from Kiara Manuelito, who finished with six points along with teammate Charity Saganey. Flagstaff didn't get on the scoreboard in the second period until Nez drained a pull-up 3 with 3:48 on the clock.

Jasmine Redhouse contributed eight points off the bench and fellow reserve Mariah Myerson added five for the Eagles, who haven't lost a regular-season game to the Panthers since Jan. 10, 2017.

"So many words. Our team is really good, sometimes unstoppable," Nez said.

Verse, a freshman in her first crosstown rivalry game, came out of the opening gates aggressive, blocking shots, bringing down rebounds and finding open teammates for good looks. She dazzled the crowd with her spin move for a layup that gave her team a 42-9 advantage late in the second quarter.

"We know that (Panthers head coach Martin) Reyes has a quality program, so any time we can play the way we want to play, it shows our growth, maturity, and shows we are moving toward where we want to be at the end," Johnson said.

The Eagles have a quick turnaround that puts them up against the 4A's No. 4-ranked team, the Saguaro Sabercats. The teams face off Saturday at Flagstaff High School for a 3 p.m. game.

Coconino is on the road for a 5:30 p.m. game in Prescott Valley against the Bradshaw Mountain Bears on Tuesday.

Coconino’s Kiana Manuelito (5) looks to steal the ball from Flagstaff’s Miyah Verse (35) as she drives the ball up the court Friday during a game at Coconino High School.

Coconino’s Kiara Manuelito (11) looks to take a shot Friday against Flagstaff during a game at Coconino High School.

Flagstaff’s Miyah Verse (35) gets a rebound during a game against Coconino Friday at Coconino High School.

Coconino’s Elyce Palmer (3) fights for the ball during play against Flagstaff at Coconino High School on Friday night.