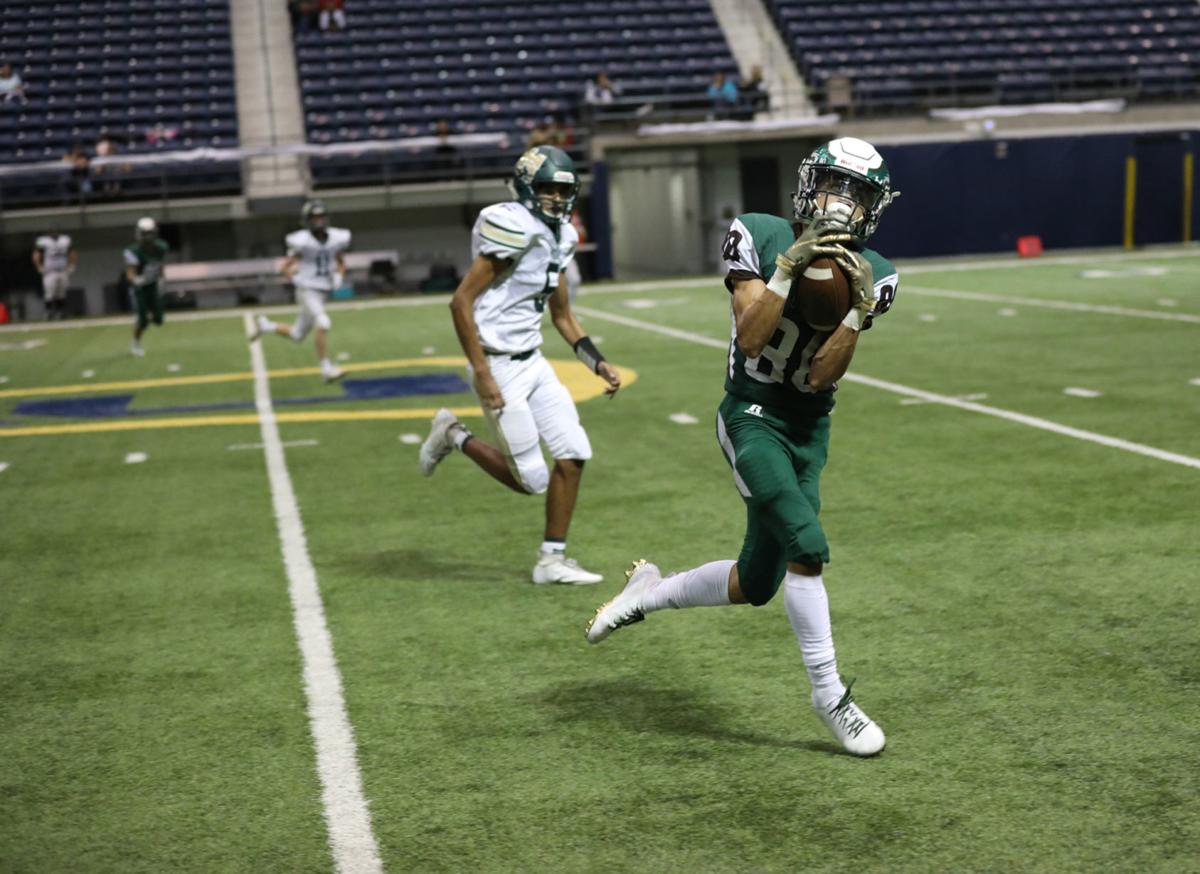 Flagstaff’s Ethan Ayup (88) brings in a pass after beating a Mohave defender to the ball Friday in the Walkup Skydome.

An upset victory over No. 14 Seton Catholic is just the signature win the No. 24 Eagles need to get near the bubble and into the 4A Conference playoff conversation.

The Sentinels are 5-2 overall and 2-1 in the Desert Sky Region. They only share one common opponent with Flagstaff (4-3, 2-2 Grand Canyon Region), the struggling Mingus Union Marauders, whose coach was recently suspended for the season.

Seton Catholic took care of Mingus 48-23 in Cottonwood behind a strong passing attack led by quarterback Joey LaLicata, who threw for 241 yards and three touchdowns in the win. For the season, LaLicata has thrown for 1,001 yards, 10 TDs and just four interceptions as his offense has scored 20 points or more in each of its wins.

"Just solid, just disciplined," Eagles head coach Todd Hanley said of Seton's offense. "They execute. By design I don't think they try and get fancy, they just execute. Try to run the ball and throw when they need to."

Stopping the high-powered passing game will be key for the Eagles, who are coming off two consecutive shutout victories, if they want to make a late splash in the 4A Conference.

Stopping the pass has been an up-and-down issue for Flagstaff this season. Prescott quarterback Dellinger Boyd went 5 of 9 through the air for 121 yards, taking advantage of short fields in Prescott's 48-7 rout over Flagstaff.

The 48 points put up by Prescott almost looks like an outlier on the schedule, as Flagstaff hasn't given up more than 20 to any other team this season, including a shutout over Bradshaw Mountain at home before keeping Lee Williams off the board in a win last week.

"I think if we win the next three, we can get in," Hanley said. "I really do. It's tough, but based on every opponent that we've played we have a shot. I don't know the formula enough to predict it, but I think 7-3 with our schedule probably gets us in."

Assuming two, and to a less likely extent three, teams in the 4A qualify for the eight-team Open Playoff, Flagstaff's chances only get better depending how the final three games of the regular season go.

Hanley spent six years on the Seton Catholic staff under a different head coach before going on to a law enforcement position with the Casa Grande Police Department.

He was the defensive coordinator on a number of dominant Seton teams before his time in Florence -- his most recent coaching position before taking the helm of the Eagles program.

Friday's kickoff is set for 7:30 p.m. in the Walkup Skydome.

SUNDAY FEATURE: Lessons in trail etiquette: A look at sharing space in Flagstaff

It wasn’t a summit meeting, per se. Nor was it held on a summit. Rather, it took place on a prime stretch of forest land near Flagstaff that o…

A growing group of community members is opposing the rezoning of a 14-acre parcel off Highway 89A, a meadow across from Pine Del Estates that …

Coconino County health inspectors will add to an increasing amount of coronavirus protocol enforcement restaurants can expect on Monday, Aug. 10.

PHOENIX — When the sun is up, he’s up and ready to hit the road by 8. Flatbed trucks are loaded with brimming barrels of water, and the teams …

As a scientist, David Gillette values precise language and facts, the confirmation of quantifiable, empirical truths. So when someone mentions…

2020 Coconino County Fair to be virtual

In response to the COVID-19 pandemic, the 2020 Coconino County Fair will be held online with virtual 4-H shows, pictures of entry winners, str…

Flagstaff’s Ethan Ayup (88) brings in a pass after beating a Mohave defender to the ball Friday in the Walkup Skydome.