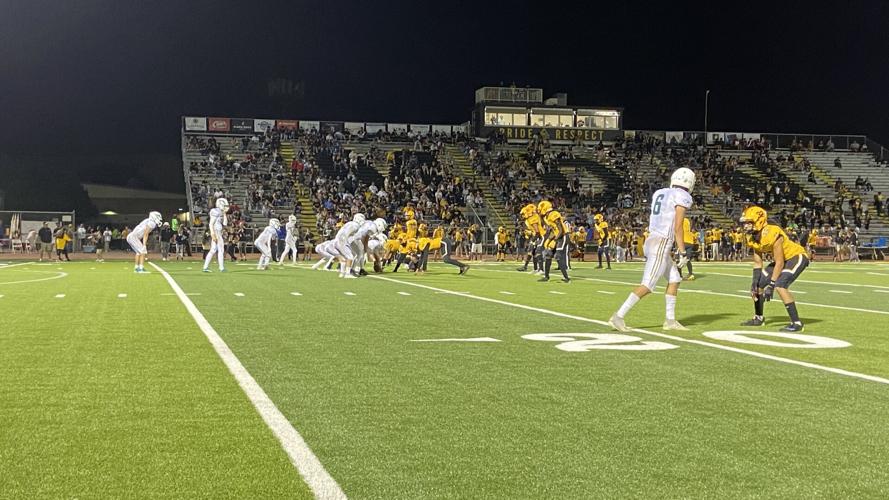 The Flagstaff Eagles and Marcos de Niza Padres face off in Tempe Friday.

Coming off their bye week, the Flagstaff Eagles could not handle a constant barrage of blitzes from the Marcos de Niza Padres and lost 30-12 Friday in Tempe.

Marcos de Niza made sure not to let Flagstaff's offense have much time to work with in the meeting of the 4A Conference teams, bringing pressure all game and keeping the visitors scoreless in the second half.

“The first thing that comes to my mind is just that’s kind of what we expected,” Eagles coach Sean Manning said. “We knew it would be a very physical game.”

After a record-breaking performance in his debut two weeks ago against the Rio Rico Hawks, Eagles freshman quarterback Chase Brown was beaten down by an imposing Padres defensive line that hit hard and forced him to make quick and errant passes that amounted to 65 yards with two touchdowns and three interceptions.

Brown threw his first pick on the Eagles’ first play from scrimmage, a quick deep pass thrown over every player except for Padres senior free safety Paul Garcia.

“I think Chase did a good job,” Manning said. “It doesn’t help to come out and throw a pick in your first pass, but he was able to shake that thing off and then come out and put a touchdown up in the first quarter and the second quarter.”

The Padres remained undefeated at 5-0 while the Eagles fell to 1-3, after starting last season with four straight wins.

Marcos de Niza started strong, receiving the ball to start the first half, and marching down the field and scoring via a short run by junior running back Lorenzo Alexander. Following the first Brown interception, the Padres scored again on a draw from junior quarterback Braesen León.

The Padres succeeded on a two-point conversion to make up for a missed extra point after the first score to take a 14-0 lead with 6:36 left in the first quarter.

The Eagles closed the gap at the end of the first when Brown found senior wide receiver Jake Weidinger for a touchdown to end a drive where the Eagles were handed three first downs thanks to penalties from the Padres.

The physicality from Marcos de Niza was in full force, amounting to multiple roughing the passer penalties that banged Brown up and some pass interference calls that kept Flagstaff drives alive.

Despite the penalties, the Padres overpowered the Eagles up front. Flagstaff finished the game with negative 17 yards rushing.

“That’s a really good team over there,” said Brown, who was 19 of 23 passing. “We got to do some better things on offense. I threw three picks, I got to be better than that. I made bad reads in key situations. We had chances to score. I just got to pick up on the little things.”

Marcos de Niza extended its lead in the second quarter on a long passing touchdown from León to senior wide receiver Juan Lopez and a screen pass to Jamaal Young II, who ran it into the end zone and gave the Padres a 28-6 lead.

Looking to put the game away before halftime, León was picked off by senior Holden Sena at midfield and returned to the Padres' 12-yard line. The Eagles took advantage and scored in the final minute of the first half on another pass to Weidinger on what ended up being the last points from the Eagles after a failed 2-point conversion.

Flagstaff had another chance to close the gap after the ensuing Marcos de Niza drive ended in a three and out and a high snap over the punter's head had the ball rolling into the host's territory. With a chance to make it a one-possession game, Brown threw his second interception, bookending the half with picks by Garcia.

The second half shifted to a defensive stalemate. The only addition to the scoreboard came via a late fourth-quarter safety forced by the Padres after an interception by Eagles senior Emiliano Armijo put Flagstaff up against its own goal line. Brown was tackled in the end zone to give Marcos de Niza its final margin.

Brown missed the first drive in the fourth quarter after taking a hard hit to end the third. Sena came in behind center to lead a drive that resulted in a punt, throwing for 12 yards on a pair of completions.

Brown came back on the next drive.

“Chase is going to prove to a lot of people that he’s a tough, young freshman kid,” Manning said. “He knows how to take a hit, I’ll tell you what. It looked like he was hurting out there. He was showing signs of wear.”

Manning said Brown was just a little banged up with no serious injury and needed a drive to recover.

“We just got to find a better way to protect him against a team [with] a lot of blitz packages, they threw a lot of stuff at us,” Manning said. “It’s hard to protect that, and that’s how they knew that they can get to us. You gotta go after the guy who set records. They did a good job.”

Flagstaff held Marcos de Niza to its lowest point total this season. The Padres had scored at least  41 points in their previous four games. The 12 points allowed by Marcos de Niza were also the most allowed by the team this season, surpassing the previous high of seven put up by Amphitheater last week.

Flagstaff has an opportunity to get back in the win column against one of the teams it beat during that early-season streak last year as it will host the Washington Rams at Findlay Toyota Field in the Walkup Skydome, the same field where Flagstaff beat Washington 47-0 in its second game of last season.

The Flagstaff Homecoming game will kick off on Friday at 7 p.m.

This historic crown is being readied for King Charles's Coronation Day

This historic crown is being readied for King Charles's Coronation Day

The Flagstaff Eagles and Marcos de Niza Padres face off in Tempe Friday.