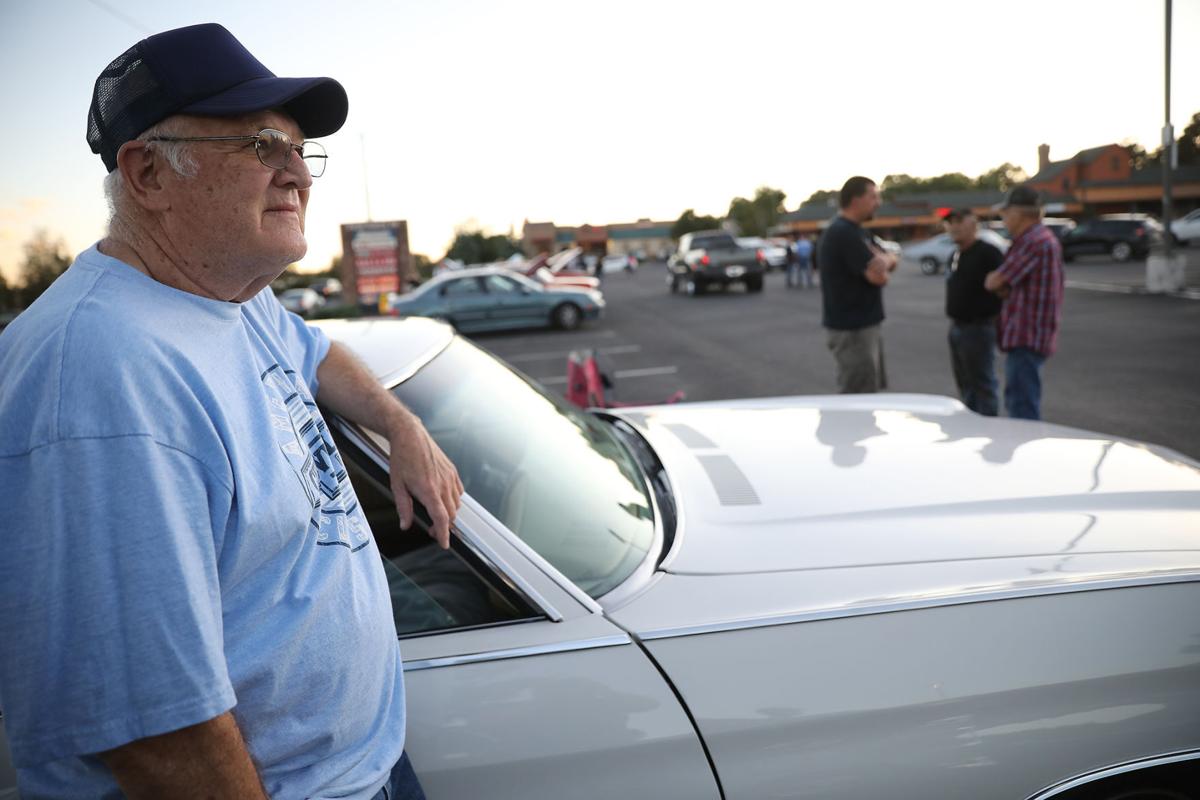 Durwood Cline leans on the roof of his Chevrolet Malibu last Friday night as the sun sets on the weekly car show that takes place in the Sizzler parking lot on East Route 66. 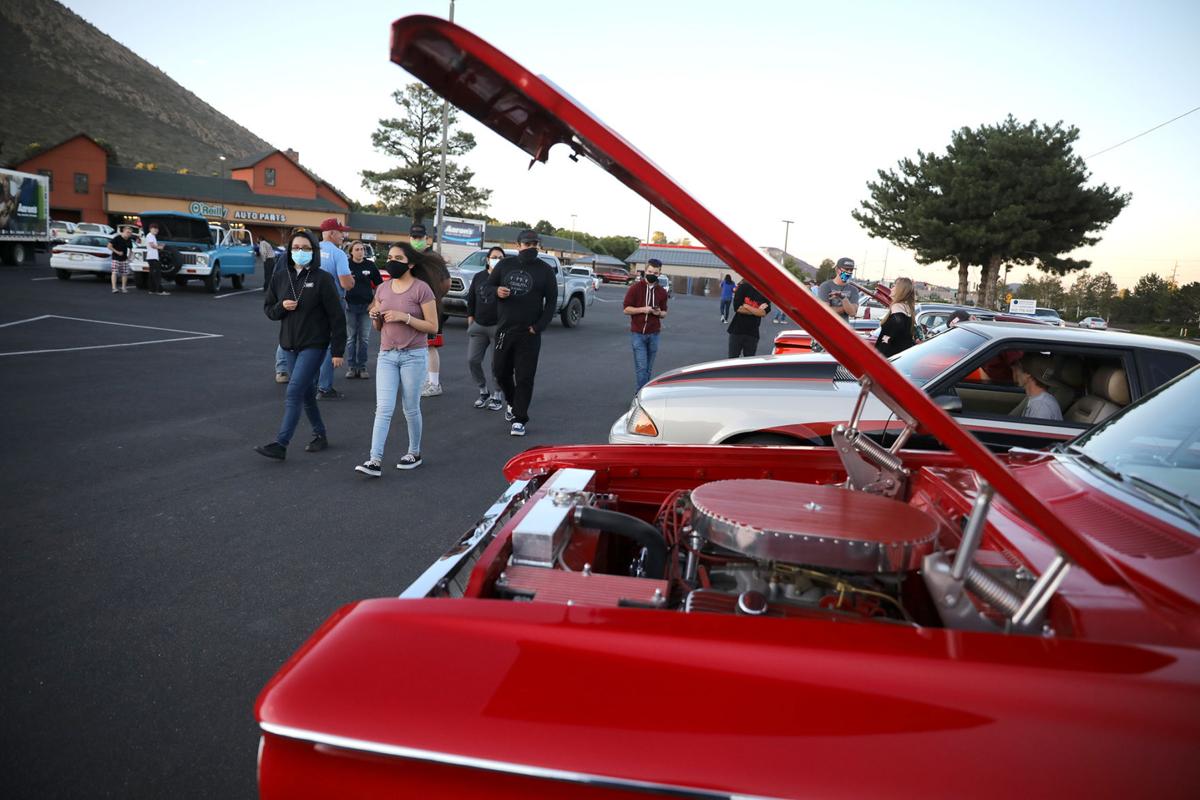 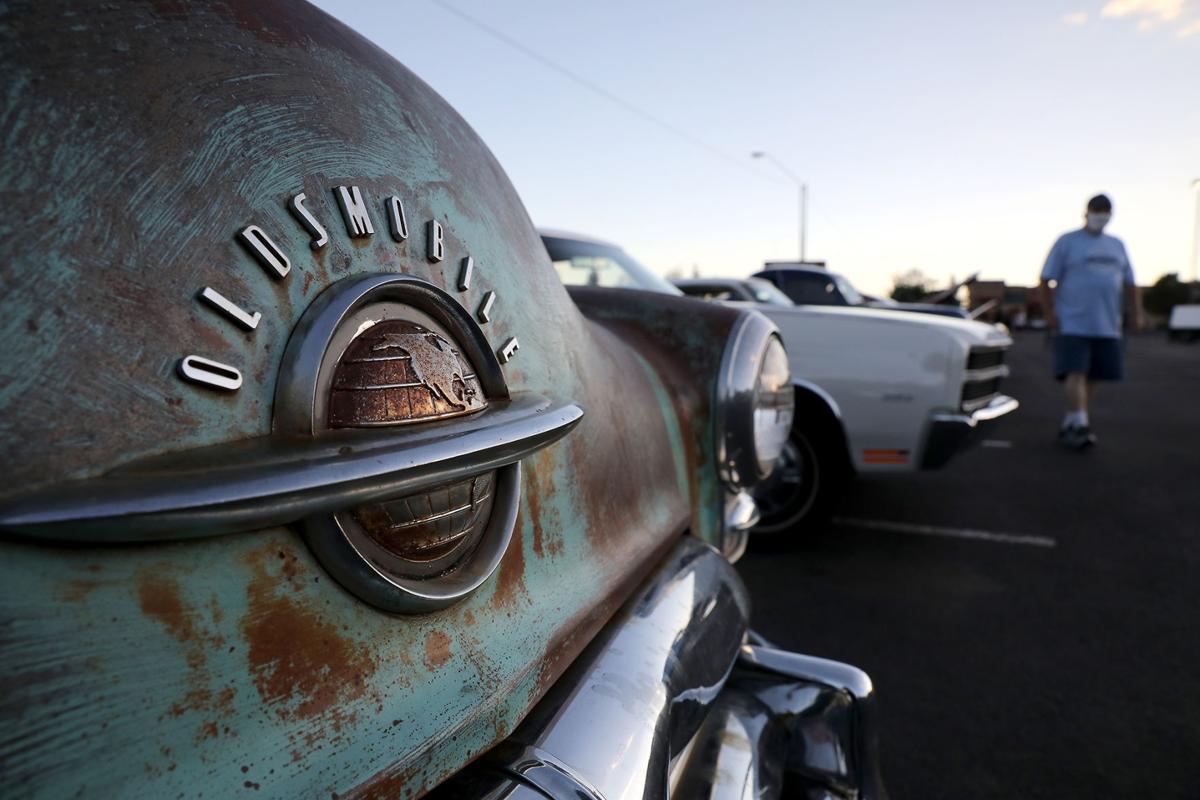 Each Friday night, classic cars line the Sizzler parking lot on East Route 66 as several local car clubs get together so that members can show off their rides.

Six o’clock. Near quitting time. Most everyone has knocked off for the day. Shadows, cast by clouds over Mount Elden, edge toward East Route 66. The first intimations of evening.

Remember Friday nights, pre-pandemic? That sense of endless possibility, of cutting loose from workaday worries, of communal gathering — good times, good talk, shared stories and fellow feeling? Remember what it was like to, you know, just go to an event?

Gone now, those days. A public gathering, sadly, is yet another casualty of the coronavirus.

There, in something of a procession of steel and chrome and revving reverie, the classic cars and modified street racers started arriving last Friday in the expansive parking lot of the Park Santa Fe shopping center. They weren’t going to CVS or the Family Dollar store and certainly not the nail salon. No, these cars, which would number nearly 20 when the night really got going, pulled up, settled in, popped their hoods, and their drivers stood around admiring the gleaming machines all rubbed and buffed to a brilliant shine.

Amazingly, Friday night had been revived — at least for a few hours at this particular strip-mall parking lot. It was a car show, unofficially. More like a friendly, informal conclave of four local car clubs that they like to call “Show ‘n Shine,” about all these car aficionados have left after every sanctioned show around northern Arizona has been canceled or turned — that dreaded word — "virtual."

But COVID-19 be damned. You can’t keep these folks down. Yes, masks were worn (by most) and, yes, 6-foot distances were observed (by many), handshakes reduced to fist bumps and, yielding to mandates, they couldn’t end the night cruising over, en masse, for some ice cream.

Other than that, though, it was just like old times. Folks unfolded lawn chairs, strolled the lines of Chevys and Corvettes, El Caminos and Mustangs, the muscle cars flexing in the fading light and street racers looking sleek and riding low. Admiring words were exchanged, restoration stories swapped, selfies snapped.

Odd how something that once seemed prosaic now comes off as exotic. How sentimental we can get for simple pleasures. Cars rushing by on Route 66, noting the gathering, would occasionally honk in acknowledgement. Some slowed to catch glimpses of the scene; others actually pulled in to check it out.

All the while, Durwood Cline stood beaming next to the gorgeous Lulu, all dolled up for the evening. Lulu, of course, is the 1970 Chevrolet Chevelle Malibu belonging to Cline and his wife, Charlene. White as a movie star’s teeth, with hood up exposing its rebuilt a 350-horsepower Turbo-Jet 396 V-8 engine, and driver’s side door open to expose its plush interior, Lulu was a sight to behold.

And Cline was happy to tell Lulu’s story, how she was Charlene’s first car fresh off the showroom floor, Charlene she met Durwood while driving Lulu, how, after they married, Durwood sold his 1971 Roadrunner and started driving Lulu, how they both drove it into the ground, and how, eventually, they began the long process of restoration. Now, Lulu is but a showpiece, her time to shine curtailed during the pandemic but now back on display.

Give Durwood a minute while he retrieves the scrapbook from the trunk. Yes, you’ve got to see this, Lulu’s transformation from washed-up commuter car to classic beauty.

Paul Dominguez nodded, by way of appreciation. His ride was several cars over, a silver 1954 Ford F-100 pickup. His wife got it for him a year ago, as a 60th birthday present. It is the same make and model as his first car he had back in high school -- which he sold after a few years. He’s had 48 cars in his life, but this pickup is special. They bought it for $19,000 but, “three weeks later, this guy shows me 35 (thousand) cash and I wouldn’t sell,” he said.

Dominguez is a Flagstaff native and seemingly knows everyone. He makes the rounds chatting people up like a small-town politician. He says his next car will be an El Camino for his wife. He’s been eying Tom Wright’s candy-coated tangerine 1959 El Camino farther down the line.

Now that, Dominguez says, is a thing of beauty. Wright, a modest type, defers. When pressed, he says he just painted it. He likes the look. He stands, arms folded over his barrel chest, soaking up the sights.

Meanwhile, far down at the end of the procession sits six low-lying, but hardly low key, modified racers. Unlike the 60-somethings who dominate the classic car assemblage, these guys (and one young woman) are the new breed, all in their 20s. They take performance sedans, your Subarus, Toyotas, Infinitys, and utterly transform them into racers.

“The Crusiers (one of the classic clubs) invited us,” said Ramsey Crenshaw, 24, spokesman for the 40 Roll Garage Club. “They love us because we love their cars, too. But we go to the track in Phoenix and do cone racing.”

He explains: “These cars are a little more refined for track use. There’s a lot of suspension work done, in layman’s terms. Very little power; it’s not about power. A lot of handling; it’s all in the fine tuning.”

Crenshaw has been working on his Subaru WRX for six years, since he was a teenager. Not to boast but, “it’s the fastest street-modified car in Phoenix, as of right now,” he says.

Crenshaw would rather talk about his little sister, Xiana, 19, a sophomore at the Embry Riddle Aeronautical University in Prescott studying global security and intelligence. She’s one of the few women into track racing, crediting her brother with stoking her interest. That’s her Mitsubishi Evo over at the far end.

Xiana likes to think of herself as a “barrier breaker.” She was the only girl on her high school football team, playing wide receiver. She’s got a private pilot’s license. But she seems most proud of learning to drive the Mitsubishi’s stick shift manual transmission.

And showing it off on Friday nights.

The continuing tale of Jordan, the deaf dog

The woman called first, before driving in from Williams. Said she had a dog she needed to give up for adoption, just a puppy. He was wild and …

Durwood Cline leans on the roof of his Chevrolet Malibu last Friday night as the sun sets on the weekly car show that takes place in the Sizzler parking lot on East Route 66.

Each Friday night, classic cars line the Sizzler parking lot on East Route 66 as several local car clubs get together so that members can show off their rides.